Just saw this at Costco a few days ago. Never seen one of those before. Had to buy it.

Claims 8000 lumens. $20 each [edit: now $15 each on sale]. That compares favorably with those big panels you hang from the ceiling. But this fits right into a socket on the ceiling so no work needed.

I had 1600 lumens LED bulbs before. This is much brighter.

Also, the panels can be oriented at any angle between horizontal and almost vertical (I think, didn't try).

Did a measurement of brightness to compare to the 1600 lumens bulb:

So indeed much brighter. It's hard to look at it from close by actually.

One big benefit I think is that you can orient the panels to your needs. [Edited: never mind the earlier bit about not screwing it in all the way, that was wrong. I measured the light distribution circumferentially around the light and it's remarkably constant when the panels are at 45deg. Doesn't matter whether you look "between panels" on the side or in front of one, you get the same illumination. Very well done actually.] Also probably harsher shadows than with a big "tube" panel.

So far I'm impressed. Feels quite sturdy, and fairly heavy but I think fine for your normal ceiling socket. Life expectancy to be seen, of course, but eh, it's a (chinese) LED, so barring poor quality control it should last years. 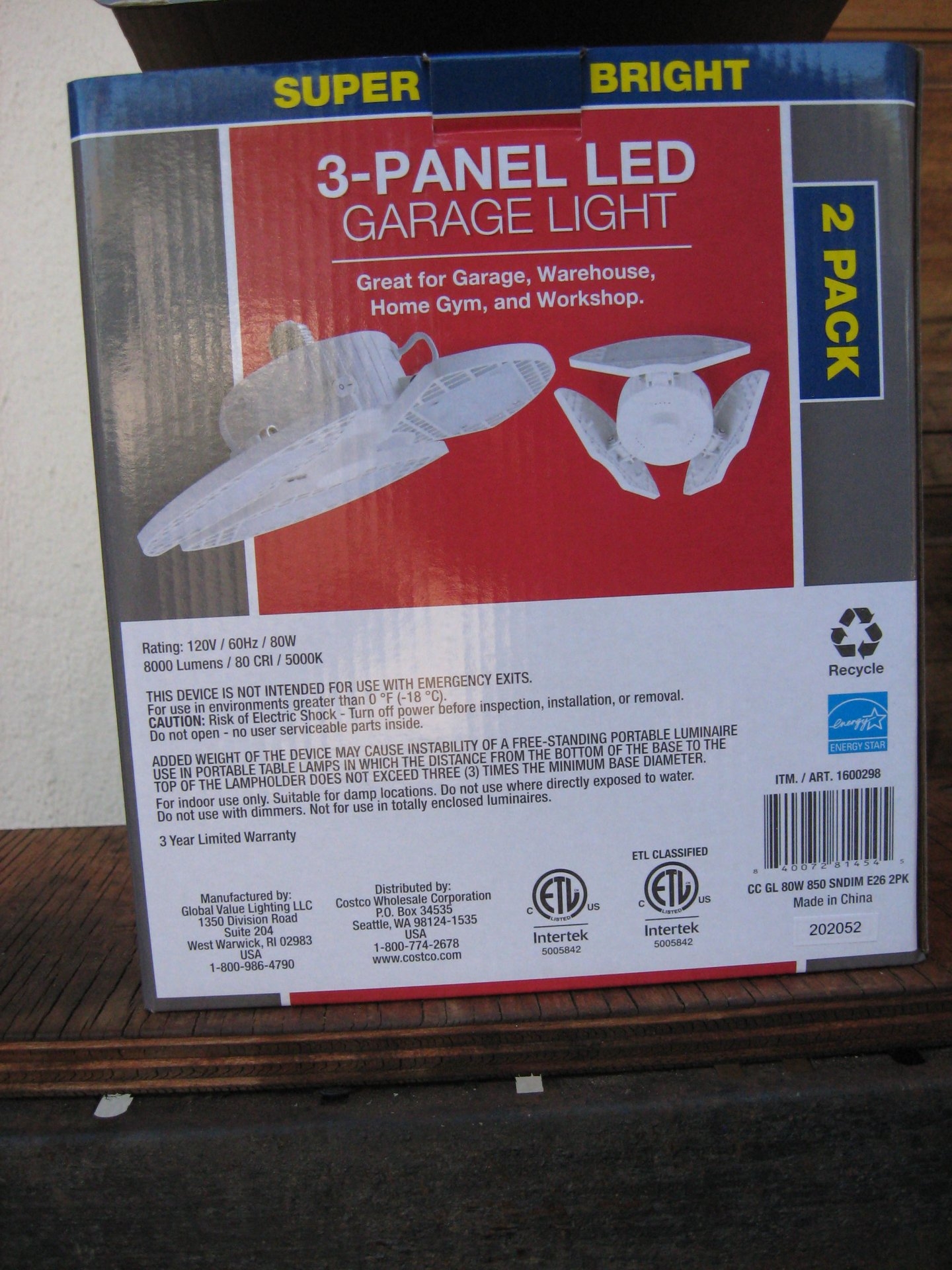 They put a couple similar ones in the basement at work. Much better than what was there before, but I'd still prefer a strip (like an LED fluorescent tube) for a shop environment. As you say, they tend to cast shadows and that may be an issue depending on where your fixtures are.

yes, I can see that that could be a problem, especially cuz they are so bright so shadows may be more noticeable. In my case, though, I only had a bulb before, so similar shadow issue anyway and now I have much more light so that's better for work and especially for finding stuff around the shop on the shelves and in piles. Several large tubes positioned properly would likely be better shadows-wise, indeed, but it is much more work too, and more money for the same light amount I think. So all in all, I think a good improvement at an acceptable cost and most notably with minimal work/time involved.

I will say, though, that after checking them out at night, they are very very bright. When walking around the shop, I don't want to look up at them directly, it's too much. I do like the cold color, though, much better for a shop than a warm white like I had before, IMO.

added: checked the shadows, they are strong if the lights are far apart and you're near one, because the light is so bright but have somewhat "soft" edges because the source is fairly wide (about 10-12" wide overall), I guess I can live with that.
Last edited: Jun 12, 2021

Even got credit after the fact for the sale price, gotta love Costco!

OK, this is bizarre now. I just saw Harbor Freight advertising this light as "New Item" and wanting $30 each for it. (It was $15 ea recently at Costco on sale, $20 ea normally.) Looks to be the same at first glance. Twice as much? And Harbor Freight of all places.... odd.

back for $30 at costco again (normally $40) for a box of 2. Mine are working great and very pleased still.

I've been looking at those lights as I have a couple of spot that would benefit from directional lighting... Maybe I'll try a couple. Can't really beat the price for LED, anyway.

One thing I noticed is that the Edison screw terminal is pretty short and ends in a big flat light base. What that means is that you can't screw it into an unusually deep socket because it won't make full contact. I have one of those on a motion activated fixture I wanted to use but no go. I will have to trim the socket wall a bit. However, it did fit with no issue on a regular ceiling socket that did not have that deep well.
You must log in or register to reply here.

What to do..... metal shop not delivered.

Shop fluids - how old is too old?