I'm doing a write-up on the excellent drawer system I just installed. I have been looking for a quality system for quite some time. I have also been wondering why noone offers a DIY kit for those of us that A. don't have the skills to build one or B. don't want to spend $2k on an AO system. I see that Adventure Trailers just started offering a DIY kit. I'm sure it is a fine system but I ruled it out mostly because it is a generic setup and not a custom fit.

After seeing this thread from our member "Hawkeye" (Charles at Warfield Offroad) I contacted him to see if he would build me a kit. His metal subframe is the best idea I have seen in the many drawer/storage threads I have checked out here. I also like the fact that it can be easily disassembled. If I ever decided to sell the Cruiser I could break down the drawer system and ship it UPS.

After a bunch of emails we agreed that mine would be modified a little from the one in his thread. The kit came with all the components pre-cut as well as hardware. 90% of the work was done, I just needed to drill holes and install the latches (in the end I went with a different latch setup).

I officially have s/n 001 and couldn't be happier. The install easy and the price was a bargain. I don't know if he plans to sell more so contact him directly if you are curious about the price.

Here is a pic. of the finished product. I will put up several more posts with details of the build. 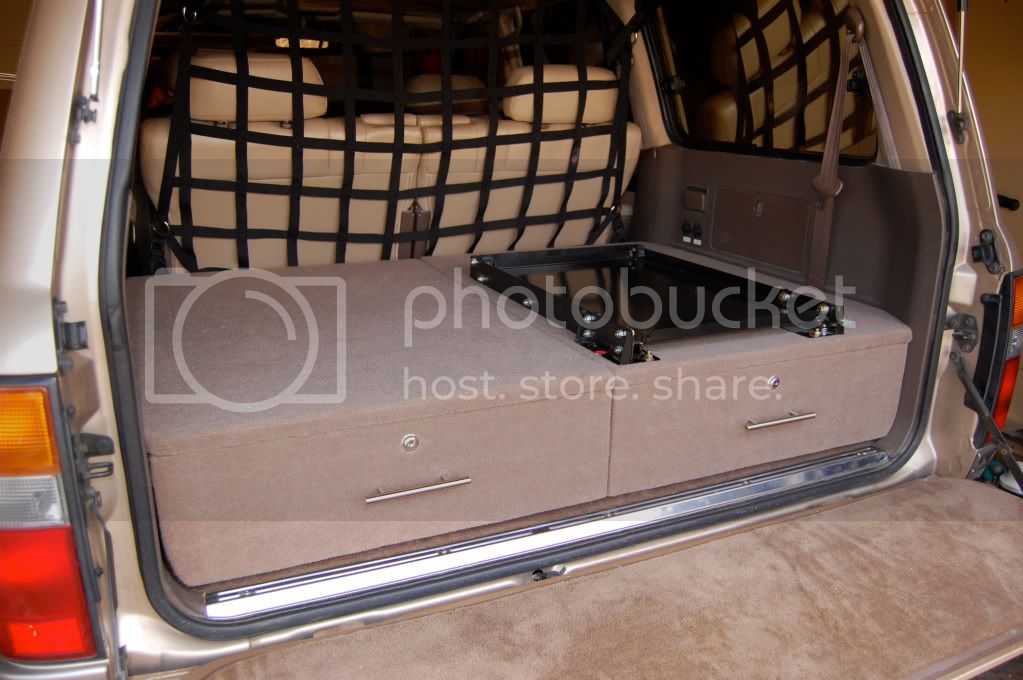 Here is the kit as delivered- 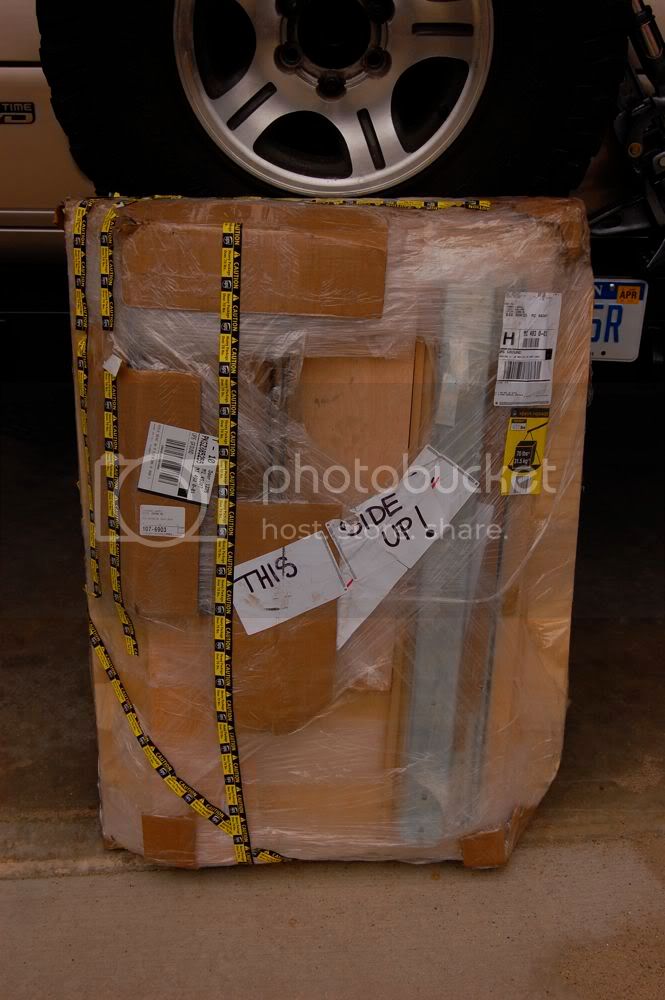 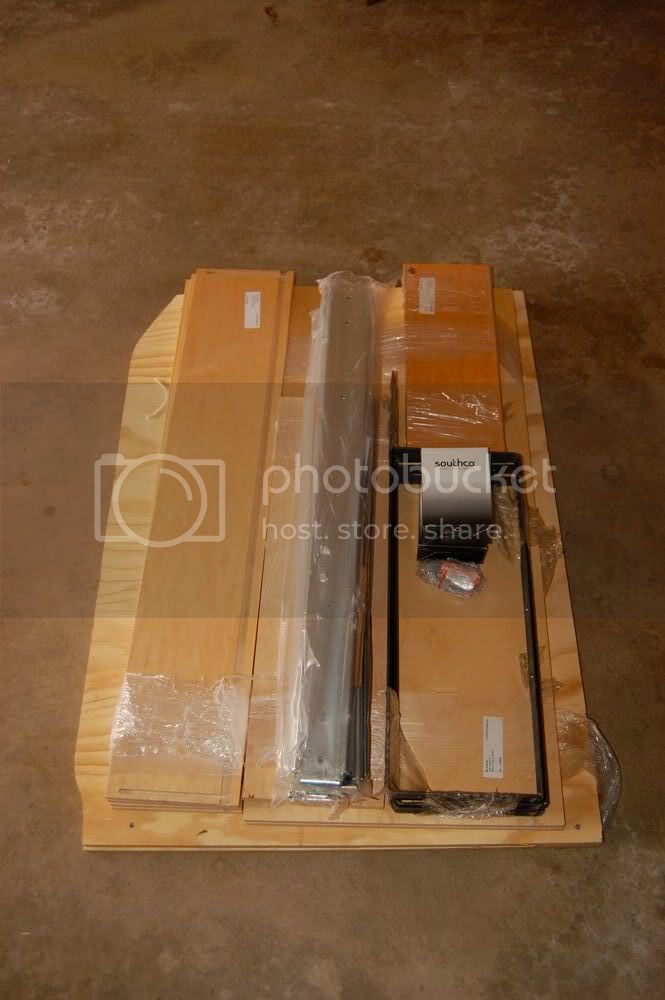 The metal subframe fastens to the 3rd seat brackets in the floor. After screwing the subframe to the floor I positioned the vertical supports in place and marked the locations where they screw to the subframe. The front edge of these supports is what the drawer faces will seat against. To locate them I just placed a drawer face on them and pushed them to the proper place.

Once the vertical supports were marked I pre-drilled them and screwed them onto the subframe. 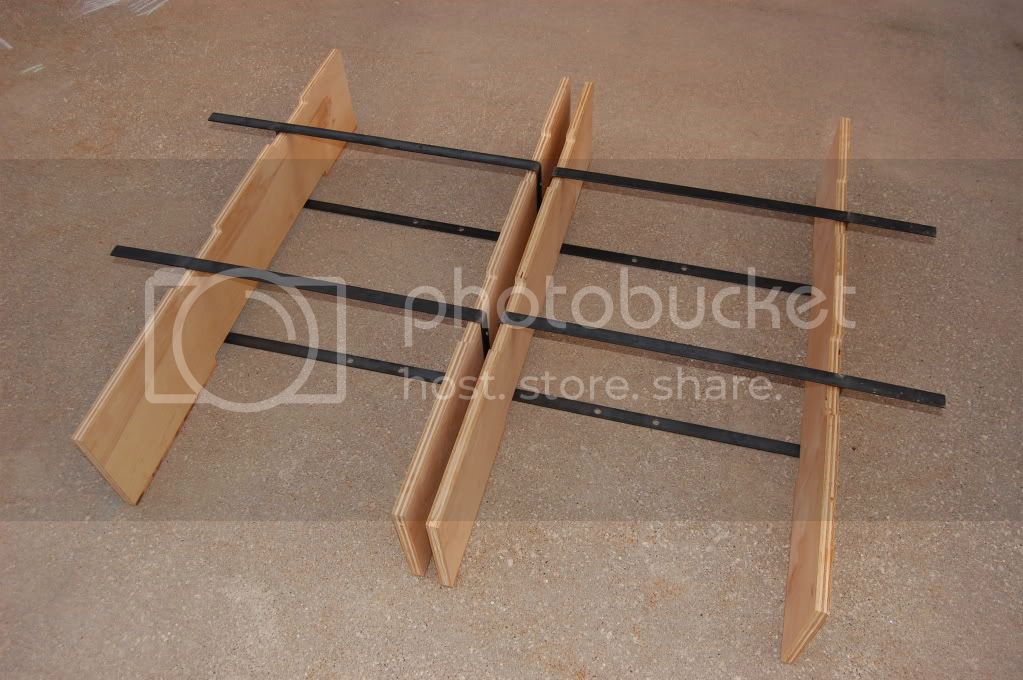 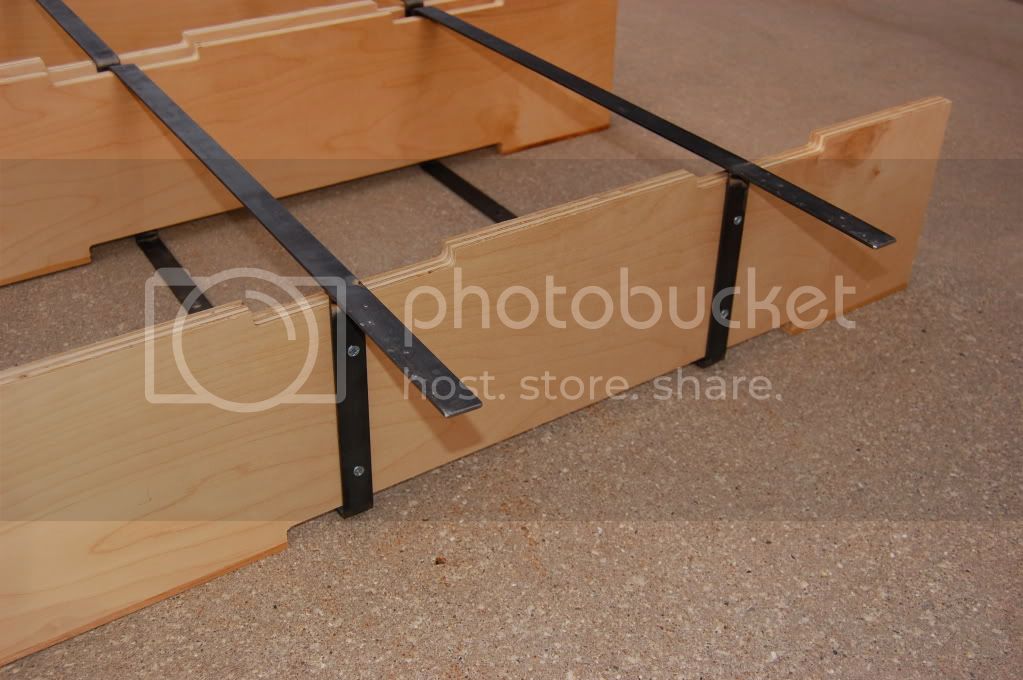 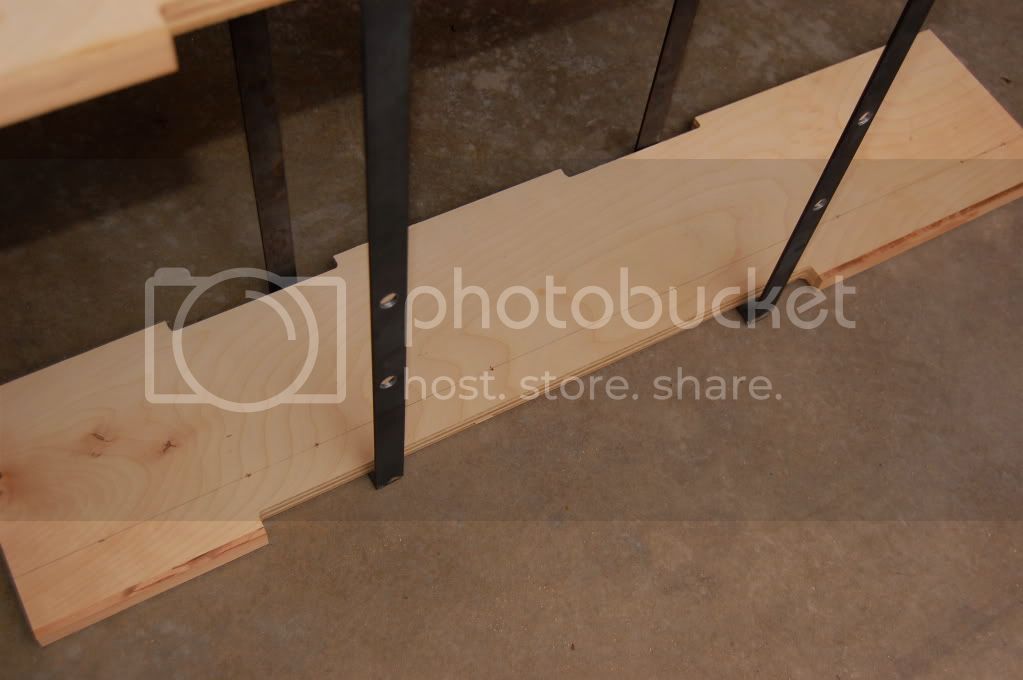 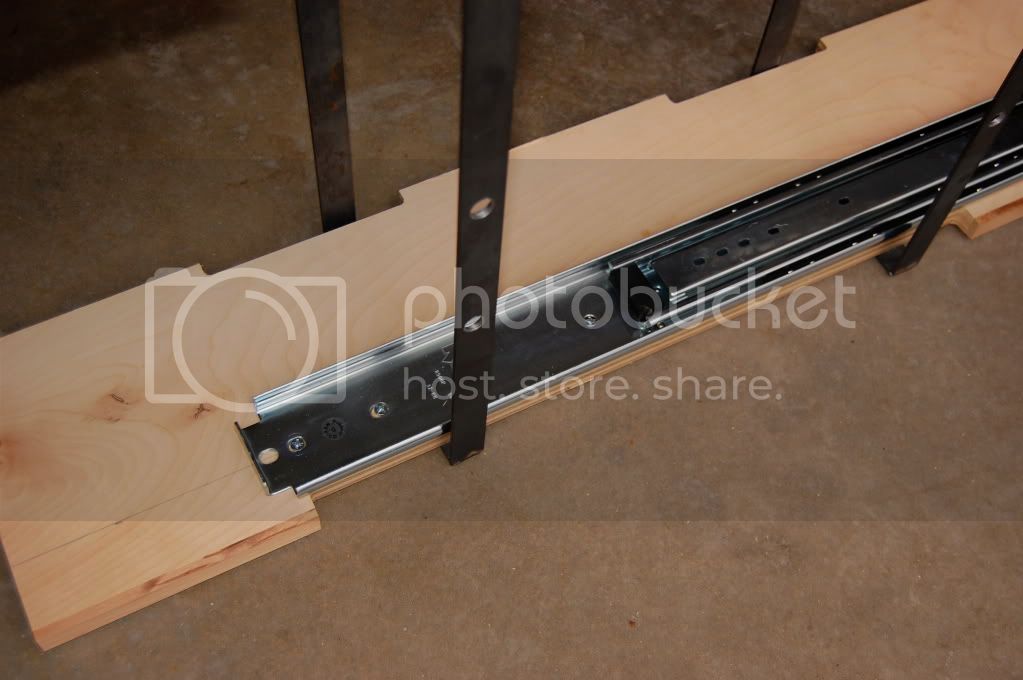 With the guides in place I bolted the subframe back into the vehicle. I ended up installing the top next as I hadn't assembled the drawers. After placing the top on the supports I traced around them to locate the screw holes. I ended up putting 6 screws down each support. 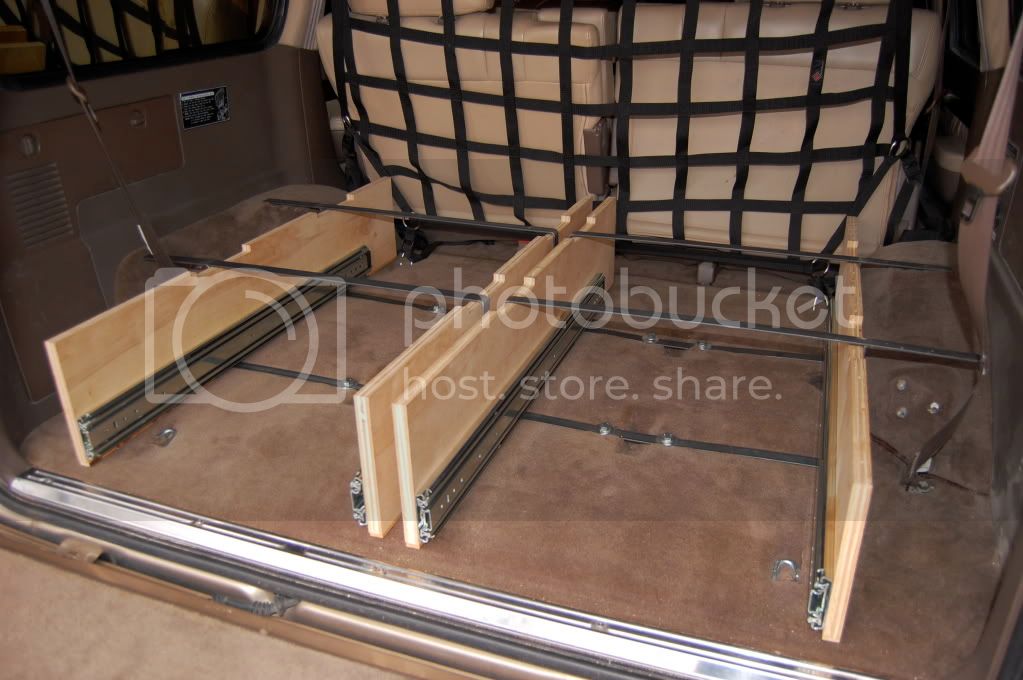 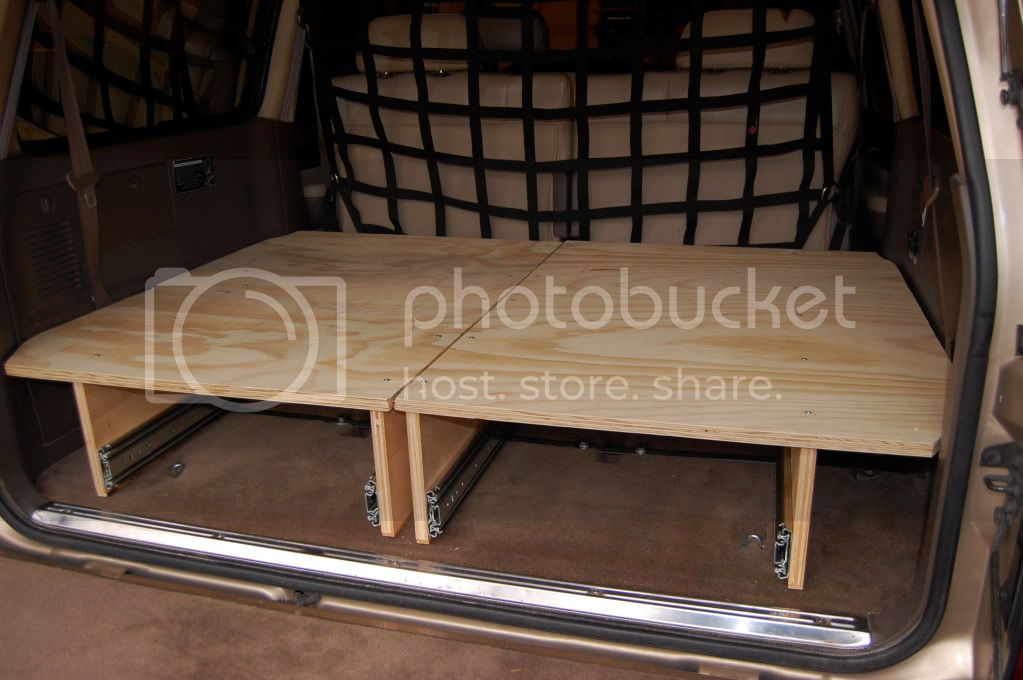 Next I needed to assemble the drawers. The fit & build here is where I appreciate getting these from someone that does woodworking for a living. I was originally going to glue the drawers. After screwing them together I decided to leave them. They are solid as a brick $hithouse and can easily be broken down if I wanted to ship the system someday. 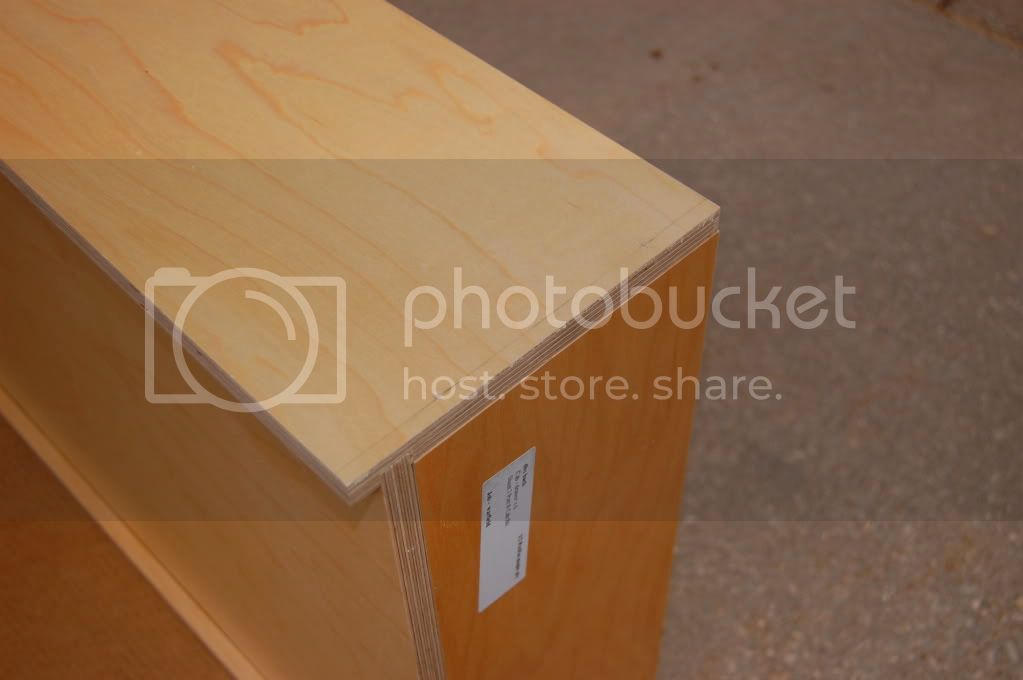 When I got the system I was a little worried about getting the glides/drawers/ supports to all line up and work properly. It was much easier than I expected. To get the drawer bottom to ride 3/8" up from the bottom of the supports I marked the glide centerline 1 5/8" up from the drawer bottom (it will make sense if you draw it out.....). Marking the screw locations ended up being very easy-

Once these are marked you can remove the drawer, drill pilot holes, then just screw it in place. 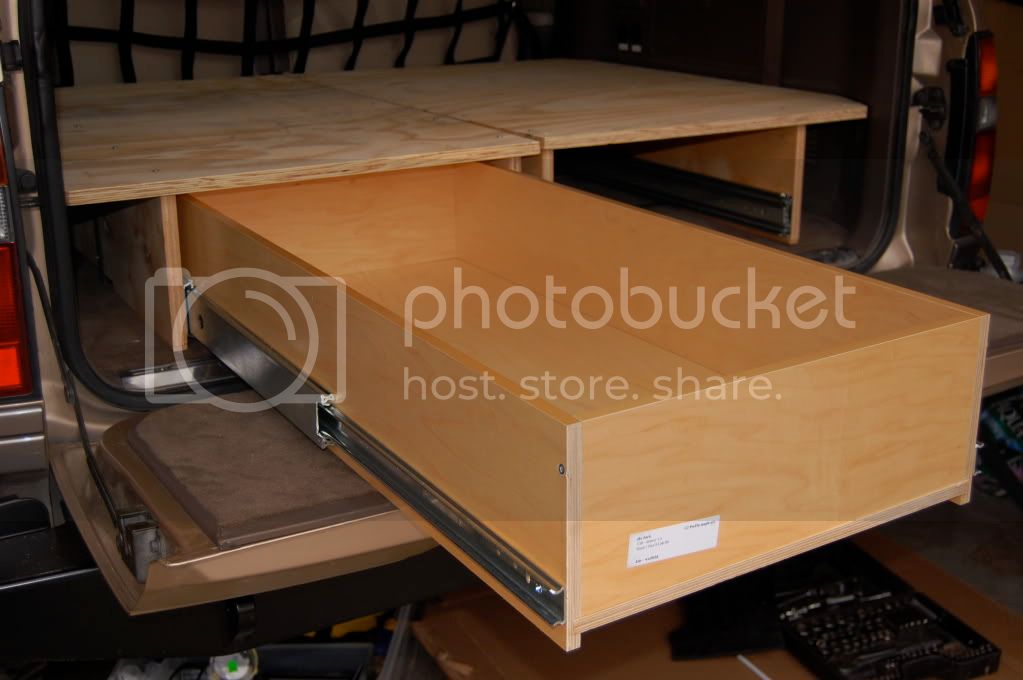 The glides are smooth and the drawers work great! 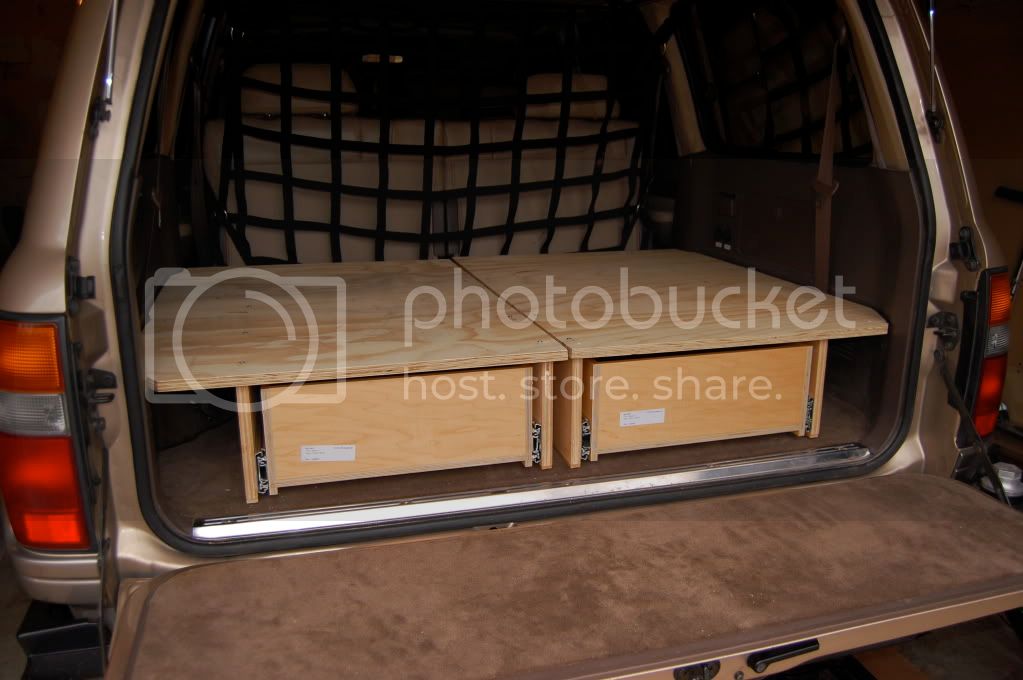 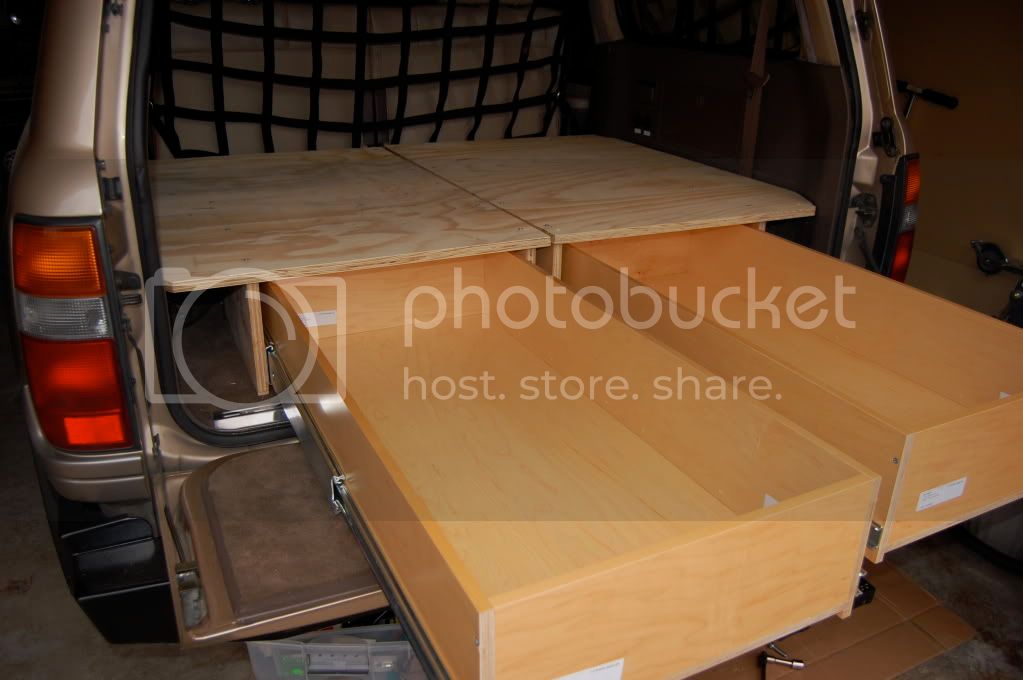 All that was left now was to install the carpet and drawer pulls. I ended up finding some nice flexible carpet at Menards for $14. I also sprang for a $9 can of 3M adhesive spray and some staples.

I did end up trimming the center edges of the top a bit. I needed to have Charles leave a little more gap for the carpet than what I told him. 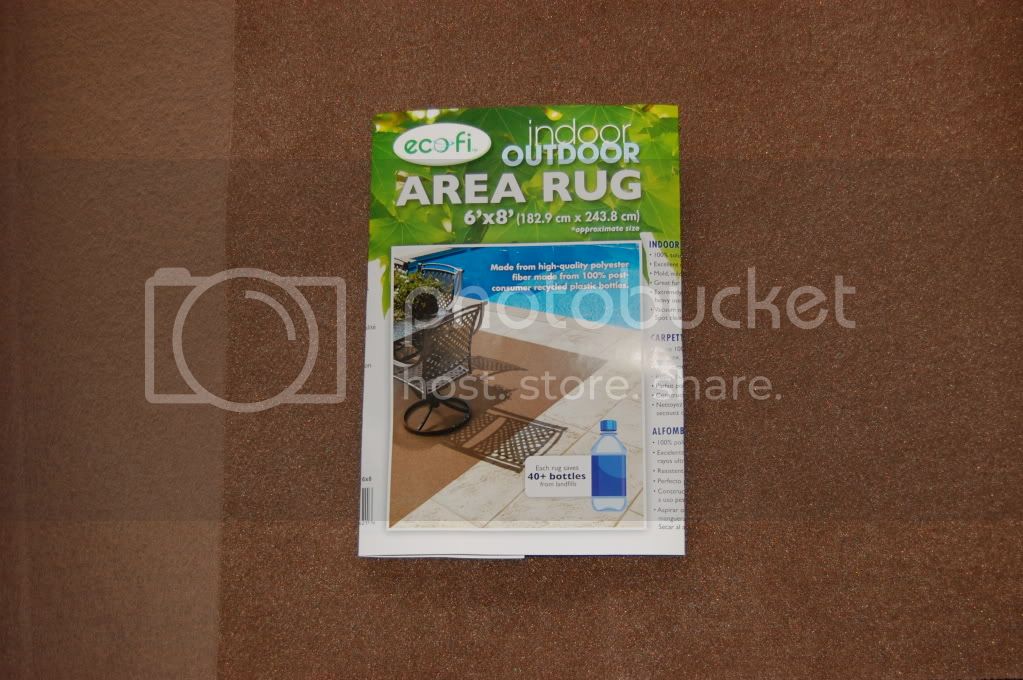 I have no upholstery skills. The end product looks much better than I thought it would. I did pre-drill one top panel for my Engel fridge slide. 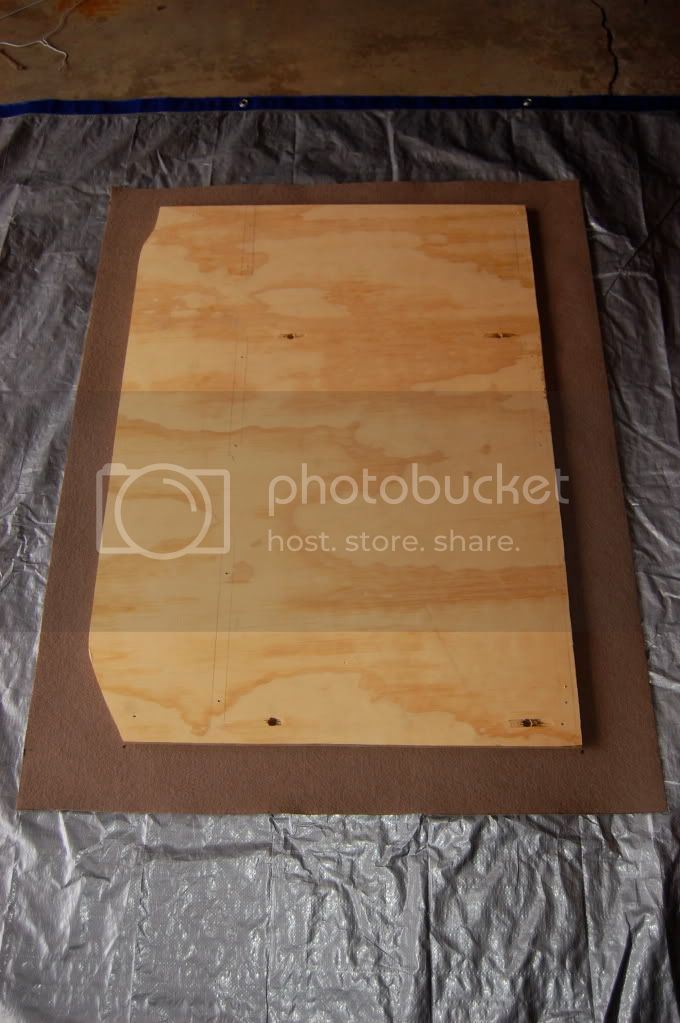 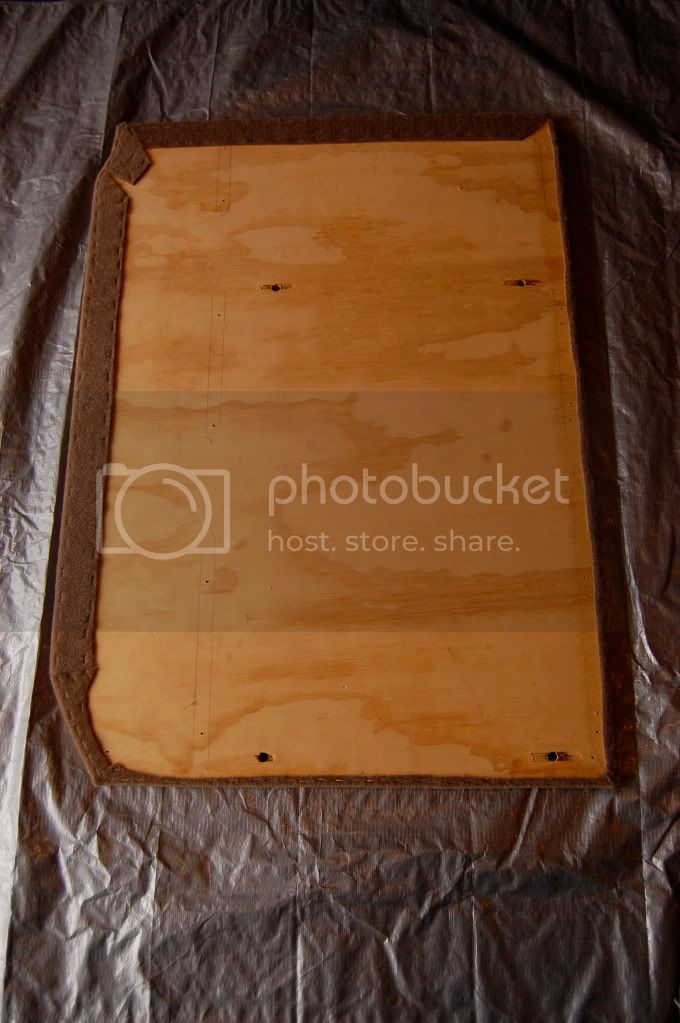 The tops look great installed. The carpet pretty much hides the screws. 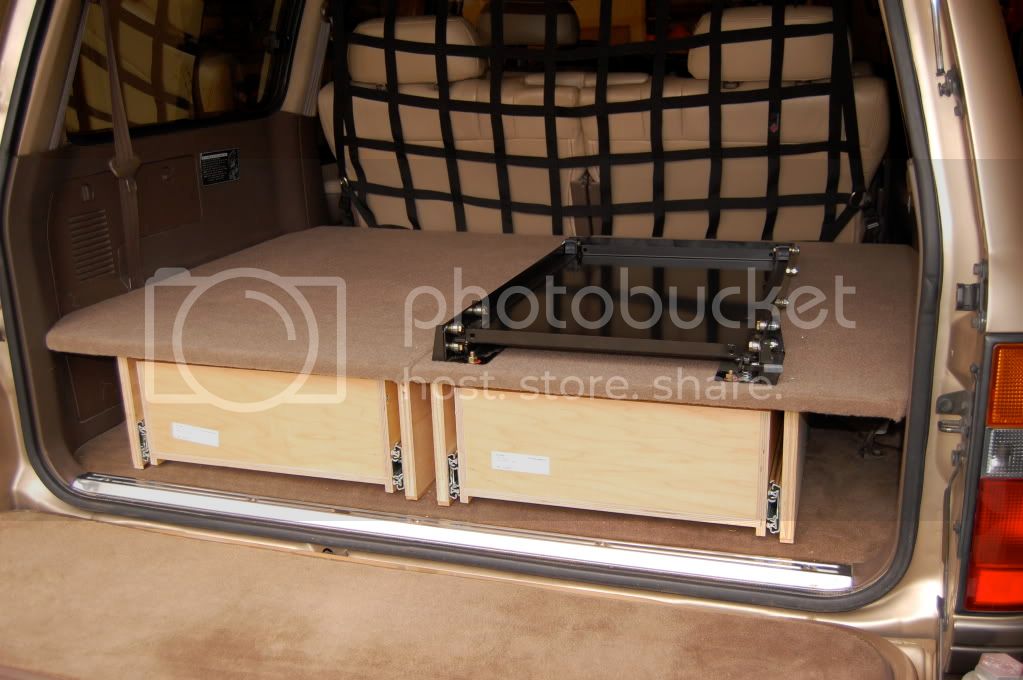 I attached the drawer faces with 4 screws from inside the drawer. I did a dry fit, clamped the faces in place and drilled pilot holes through. 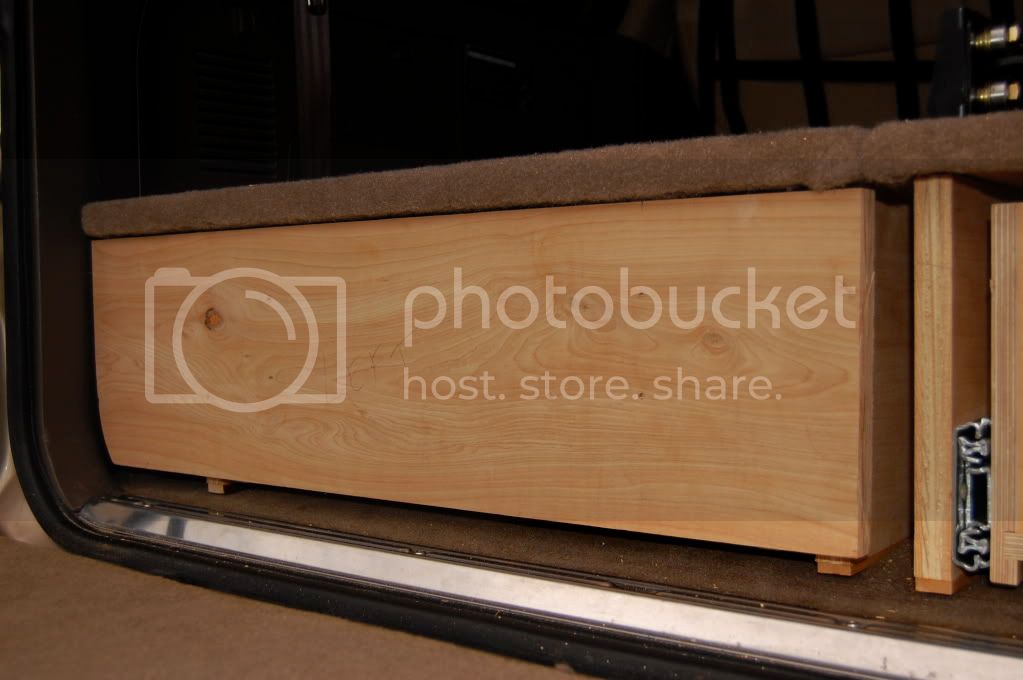 I was originally going to install some heavy duty locking paddle latches. I ended up going with a simpler setup. The catch for the paddle latch would have mounted to the underside of the top. After loading up a drawer I realized than anything loaded up to the top of the drawer would hit on this. I made a trip to Lowes and bought some simple pulls and $5 lock cylinders. The lock just needs a small slot in the underside of the top. 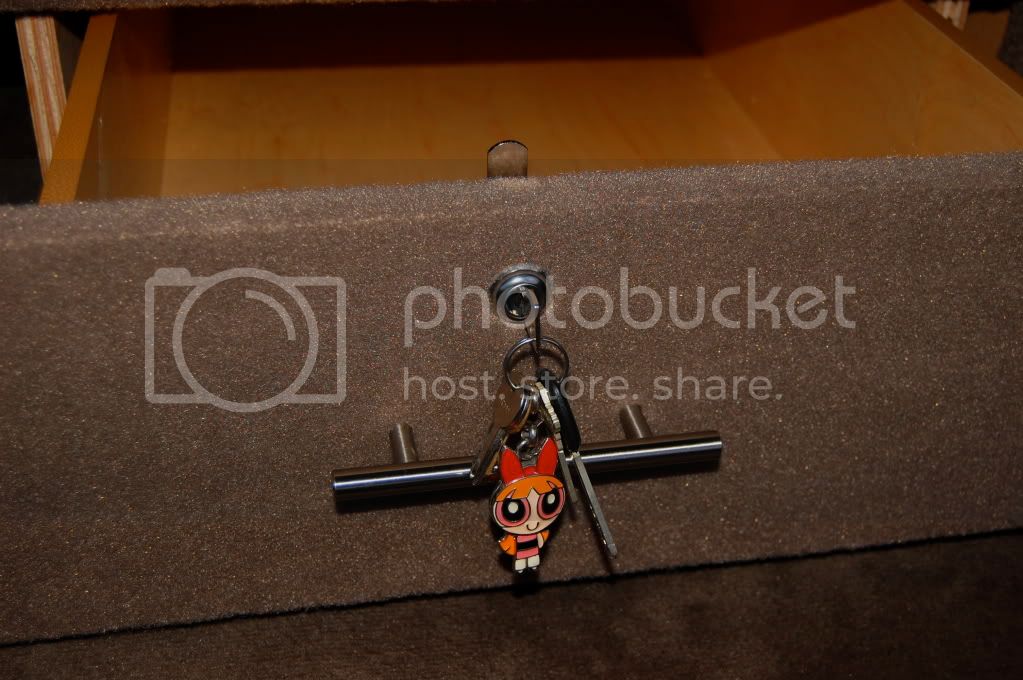 Overall the drawers look amazing. I need to thank Charles for making this great custom kit for me. 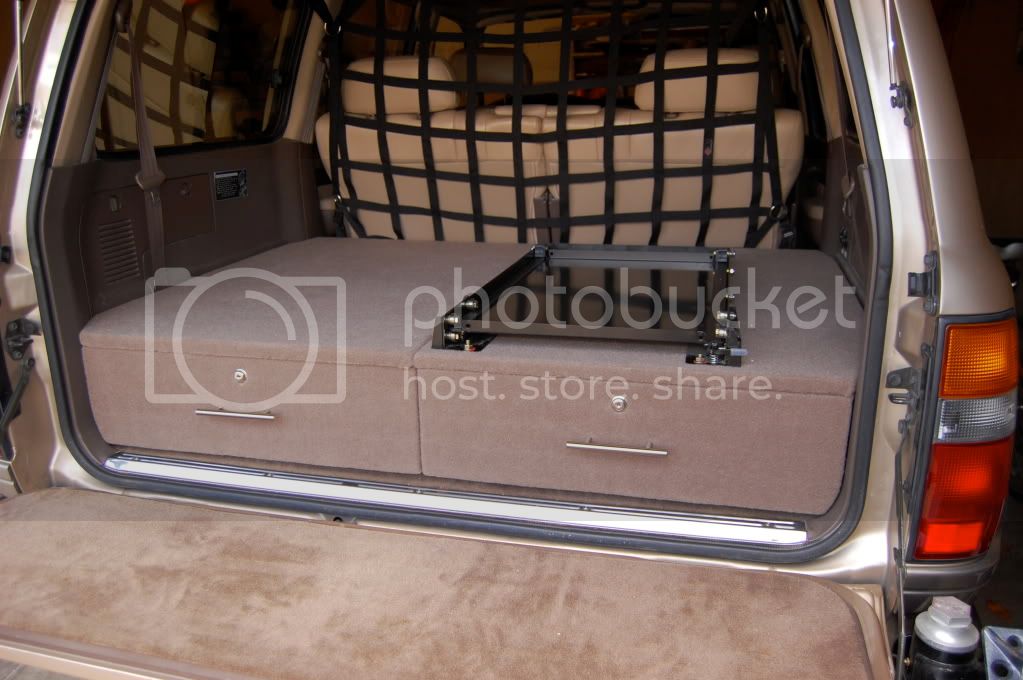 Clutchee said:
FYi...... your link is to muds forum page not a thread

That looks great. I am glad your install went smooth.

Looks great! Do you have any pics of how the system works with the 2nd row seats folded down? I need to get some drawers in my 80, but I need to make sure they will work for a sleeping platform when the seats are folded down. Mainly, I guess I'm asking if the top of the drawers lines up with the top of the seats (folded forward) so a mattress would lie flat.

mstocks said:
Looks great! Do you have any pics of how the system works with the 2nd row seats folded down? I need to get some drawers in my 80, but I need to make sure they will work for a sleeping platform when the seats are folded down. Mainly, I guess I'm asking if the top of the drawers lines up with the top of the seats (folded forward) so a mattress would lie flat.
Click to expand...

I don't have any pic's of that. The platform is 9 1/2" up from the floor if that helps. Not to speak for Charles but I would think it would be easy to make it any height you wanted.
P

mstocks said:
Looks great! Do you have any pics of how the system works with the 2nd row seats folded down? I need to get some drawers in my 80, but I need to make sure they will work for a sleeping platform when the seats are folded down. Mainly, I guess I'm asking if the top of the drawers lines up with the top of the seats (folded forward) so a mattress would lie flat.
Click to expand...

I'm looking for a similar setup as well.