Visit site
about 6 months ago i got a 91 fj80 from a customer with a blown 3FE. figured i'd install another stock engine and then decide which vortec i wanted to swap into it in the future. i relly like twotonics inline atlas engine swap and had my mind made up that i would go with the 4.2 inline 6. good power, great fuel economy and easy to fit in there since it's about the same size as the original engine..........

we took it to pismo for SNT and had a good time although with the lift and 35s on stock gearing it was'nt the fastest rig out there. probably the slowest and some of the diunes it just would'nt even conquer half-way. definetly needs more power.

so about two weeks ago i'm scanning thru the cruisers on the local CL and i find an 80 with a vortec already in it for a good price. just so happens it's also a 91, same color and only about an hour from me.

talked tothe guy, set up a date and went up there to drive it. sure enough, 97 vortec 5.7 with the 4L60e trans and a split case from an fj60 ( which i prefer anyways ). rus and drives solid. t-case makes noise, knuckles are leaking badly, needs some other odds and ends as well as paint. stock height but with new tires. already passed the ref, smogged a few months ago and the reg is good. so i bought it for $3500 and drove it home!

last week, i rebuilt the t-case and front axle. upgraded the brakes to the 94 and newer rotors and calipers, checked all the other fluids, fixed the AC and let the wife drive it for a week.

yesterday it was onto the second stage of the "conversion"; take the suspension and tires off the orig 80 and swap them with the stock setup from the vortec 80.

got the suspension transplant done in a day on both rigs. only hick-up were 2 broken bolts for the rear sway-bar hangers. tried to remove them but ended up having to drill them out and re-tap them. no big deal. 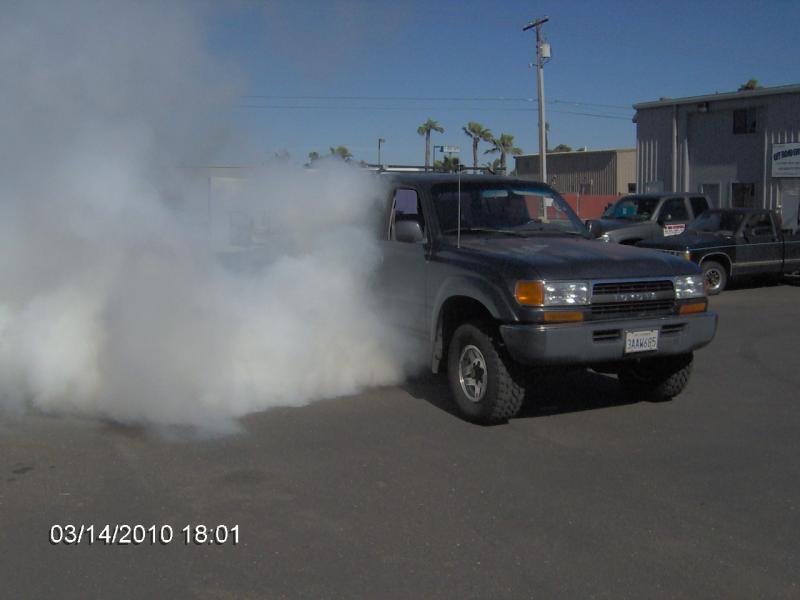 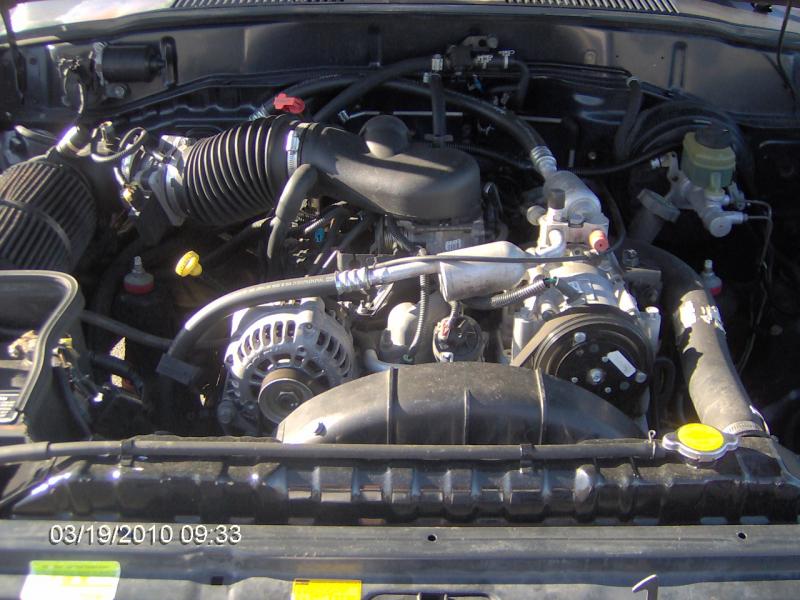 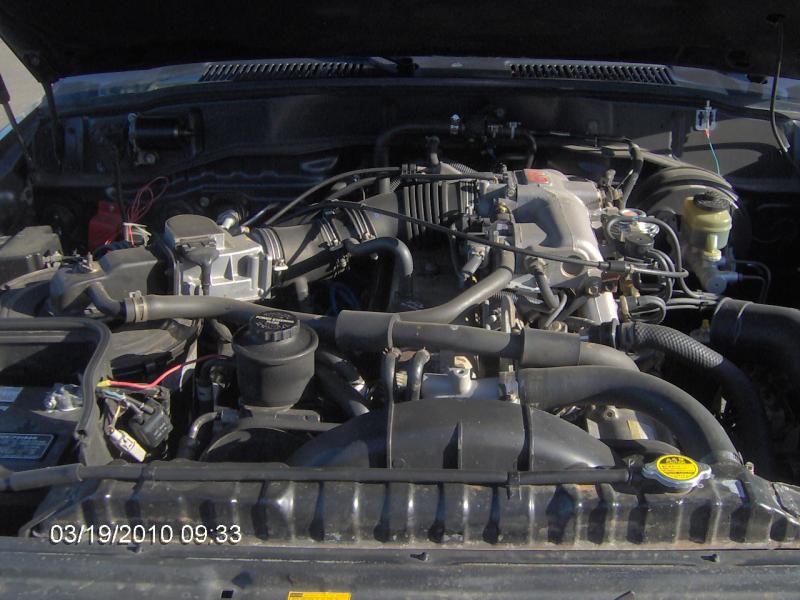 Visit site
another before pic 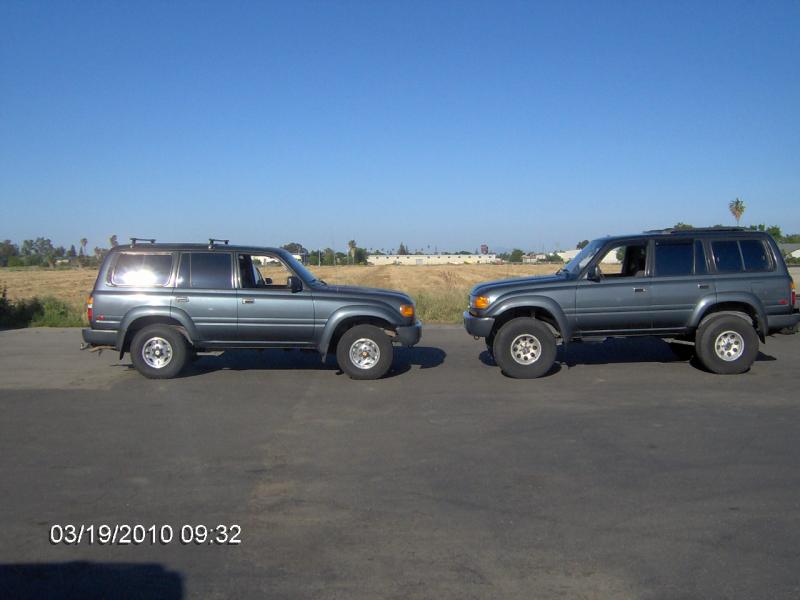 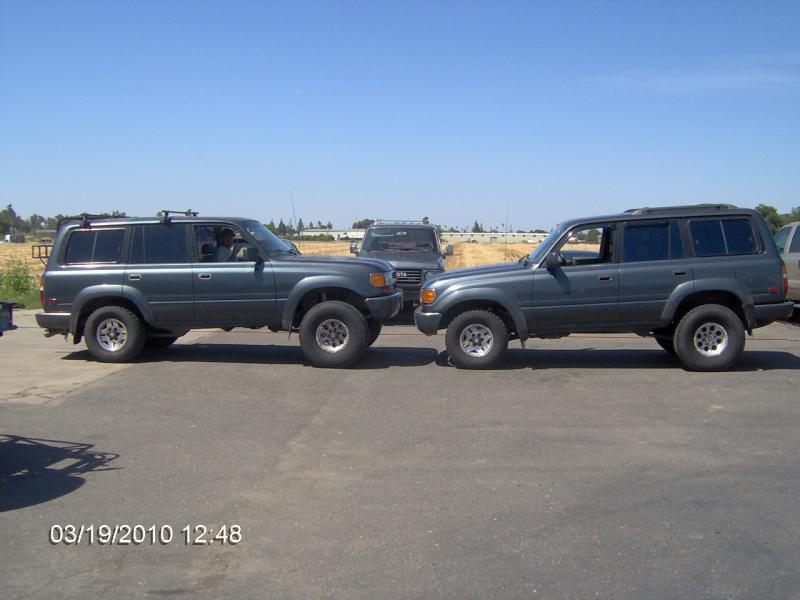 Visit site
the completed rigs look pretty much the same as the before pic. took both of them for a test drive, everything worked and felt great.

anybody want to buy a 91 80 in decent shape? stocker is for sale.

more updates to come. need to do something about the air cleaner, paint and other items. thinking about installing a sety of later elocker axles as well......

This is the kind of swap we should all be doing; too bad supplies are limited.

Visit site
now go out and burn some mud!

Visit site
wow...an 80 series baking the tires. That is something I never thought I would see. Awesome!

Visit site
Was this the one in Sac? If so that wasn't just a good deal, it was screaming deal! I'm glad it went to someone who I know will use it.

Is the interior in the vortec 80 as nice as the other one? I remember getting in that thing at SNT and it looked brand new!

Visit site
They're both peices of garbage. I give you a $1000 for them both.

iron_giant said:
Was this the one in Sac? If so that wasn't just a good deal, it was screaming deal! I'm glad it went to someone who I know will use it.
Click to expand...


yup, that's the one. jeff looked at it and after talking to the guy found out that i was coming up to check it out and buy it. so jeff backed off. i owe him a

Is the interior in the vortec 80 as nice as the other one? I remember getting in that thing at SNT and it looked brand new!
Click to expand...


the interrior in this one is actually a little nicer, aside from the screwed up center console.
i need to build a better shifter setup for it and clean up the console at the same time. the shift indicator does'nt show the proper gear either so i need to change it around. i recently worked on a customers 4BTFZJ80#$%#%^#%#^ with the same issue. so i came up with a simple way to fix the problem on the shifter itself. the dash indicator is a different story. i might be able to make it work as well since the trans in this rig is a 4L60e and utilizes an mlps, similar to the one on the a440f.
one the same 80 i had to modify the shift linkage for the t-case as well. i ended up modifying an oem split case shifter and made it work along with a custom shifter boot. thinking about doing the same thing on this one unless i can't help myself and twin-stick that puppy.

meanwhile, the wife is happy with the stance and it's got too much power for her. so i got that going for me.

meanwhile, the wife is happy with the stance and it's got too much power for her. so i got that going for me.


Dude.. you know you are gonna be driving that thing daily in the future

are you gonna take it on the Rubithon run?? Im bringing the new to me 80 this year

dtrain said:
Dude.. you know you are gonna be driving that thing daily in the future

are you gonna take it on the Rubithon run?? Im bringing the new to me 80 this year
Click to expand...


nope, this is the wife's rig. tell you the truth, i like my early cruisers better. my dd is an 84 hj47, for now anyways.

rubithon, not for this rig. but i have something else in the works for that. the 80 will be hitting the dunes at SNT FO SHO!!!!!!!


thanks, it is fun to drive. i had some a-hole on my tail this morning on the freeway on-ramp. he was driving a lifted dodge 1/2 ton 4x4 gasser pos. tried to pass me in the middle lane and i put my foot down. made him feel like he had a 2" dick. he probably does anyways.

Visit site
Too cool Georg! Look forward to checkin' it out....
You must log in or register to reply here.