I love my FJ60 but am stuck on an element of replacing the belt on the smog pump/air pump. The short question is - what am I missing about getting the air pump belt back on? I’ve looked a lot at the previous threads around smog, etc., but haven’t found this issue; let me now if I’ve missed something and I’m happy to look at earlier posts.

I went through a many-year many-pump process to learn that I needed to replace the PS pump with OEM (rather than aftermarket). In that time, I also destroyed the OEM air pump (from leaks from PS pump). I ran it de-vaned for several years, and then moved to state where I need to pass emissions tests. I installed a Cardone aftermarket pump. I remember it was a pain to install, but managed.

Fast forward a few years, I finally got the OEM PS pump installed, and the air Pump belt fell apart shortly after. I assumed that the air pump finally went out as I expected (is aftermarket and it ran with a leaking ps pump for 2 years). But it appears that the pump works and the belt just failed. Now, though, when I’ve tried to install a new belt, I can’t get it on. It appears to be mounted in two locations, one is the belt-tensioner and the other is on a long bolt on the underside of the pump. I had to remove that lower mounting bolt just to get the belt onto the pulley, and now, no surprise, can’t get the bolt back On.

I’ve been messing with it for a while. I’m very much an amateur, and stumped. Any tips? Am I missing something? I even managed to start and drive the vehicle and the pump appears to be working but it’s just not well secured. I tried tightening the belt tensioner on the top of the pump, but that seemed to put the pump farther from alignment for the bottom bolt. I did some light experimentation with a pry bar but didn’t want to do more serious damage.

Thanks! I haven’t posted before but for years have used ih8mud As a resource to repair and maintain the vehicle fo years - I really appreciate all the knowledge here.

Your original adjuster probably looked like this. By the way, the air pump belt only goes around the water pump and the air pump. Get yourself a used oem pump and have it rebuilt. 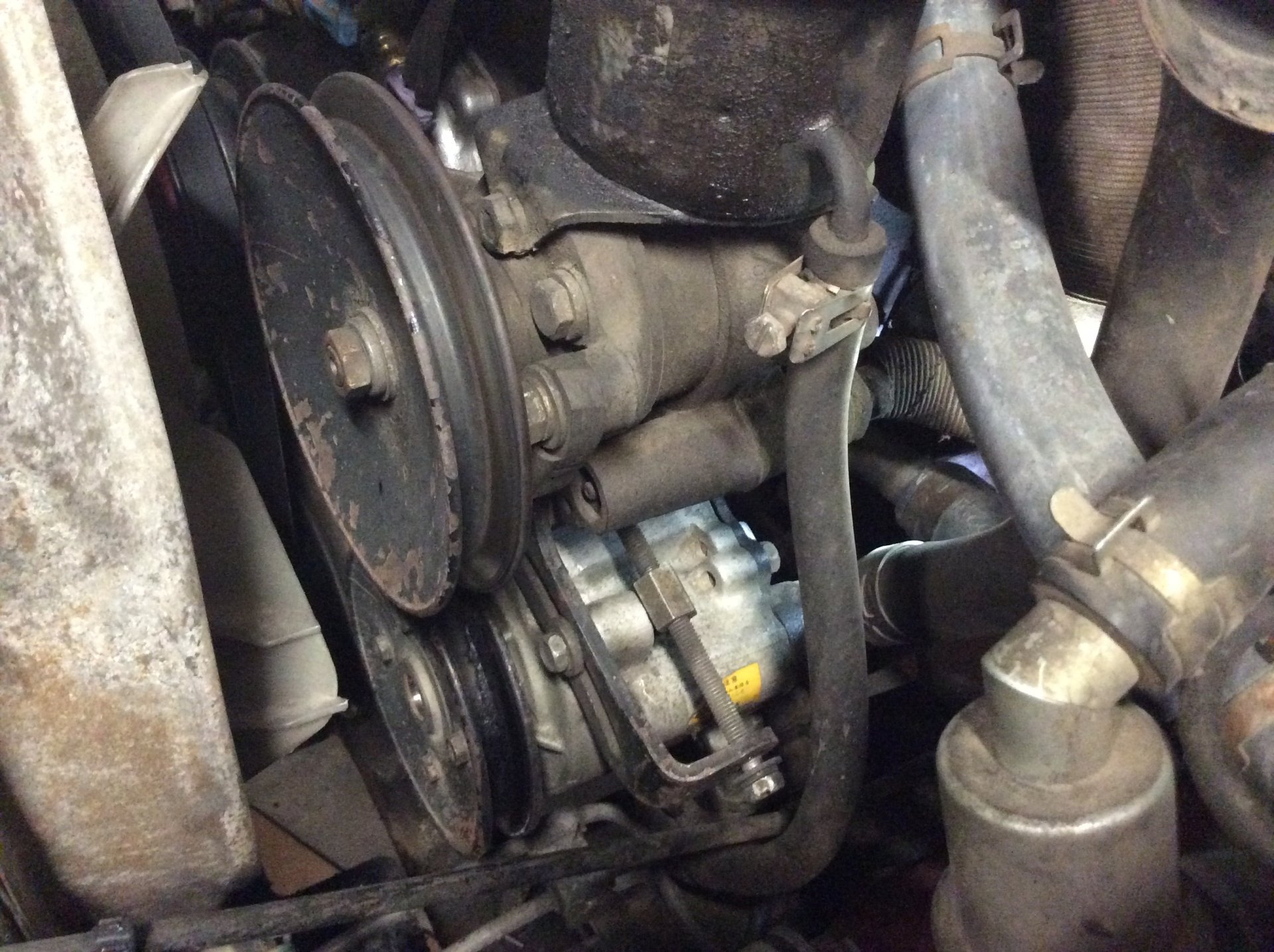 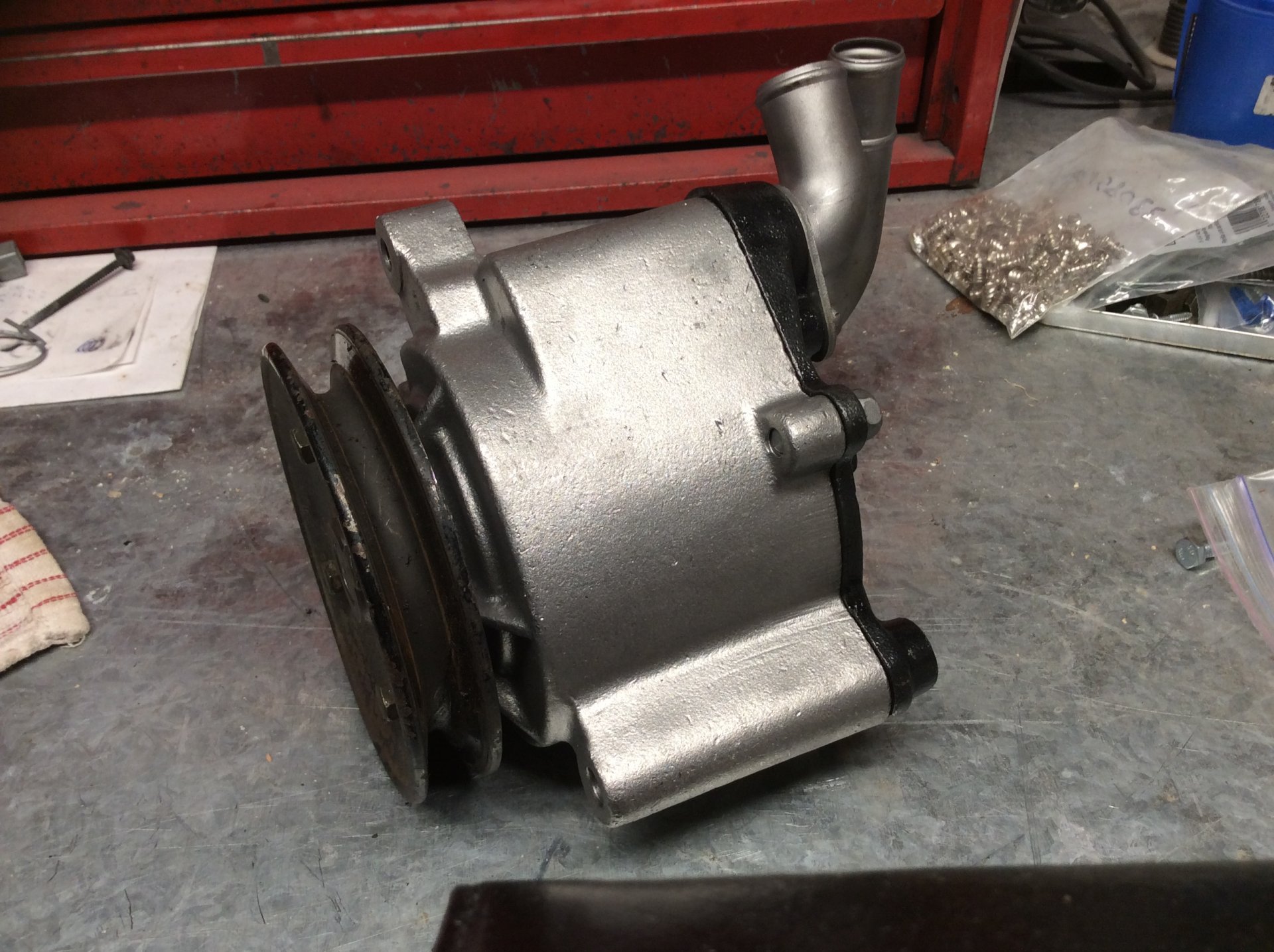 The hole on the bracket in the back side (towards the firewall the long bolt goes in is sized larger than the bolt. There's a spacer part that compensates and without it the smog pump will be slightly off. Take a look at this thread for that spacer Smog Pump Tech - don't lose the spacer

I just replaced my smog pump and had the opposite issue than you. I loosened the top bolt on the tenaioner but my pump didn't pivot at all on that bottom bolt. So I removed the bottom bolt and it finally pivoted. Then I came across that link about that spacer bc when I reinserted the bottom bolt there was a little play. I took the pump out again and found that spacer part was laying right behind the bracket. I put it back on and there was no longer any play and still pivoted so I could put the belt back on. For me the length of travel on the pivot was limited to the crusty hard hoses bc I didn't replace them. I hope this helps.

Forgot to mention when I reinserted the bottom bolt, I was hitting the bracket on the back side. Maybe that's what happening with you? In my case, I placed my other hand on the backside not only to see the bottom bolt went through the bracket but also not push that spacer part out which I did a few times.

fjc-man said:
...By the way, the air pump belt only goes around the water pump and the air pump...
Click to expand...


And the crank pulley!

The air pump belt goes round the crank, water pump and air pump. The OEM belt number is 99343-11120-77. Make sure you have the correct belt. It should go on without having to remove the air pump. You just need to loosen the tension. You may need to remove the air hoses on the back of the pump to get it to rotate far enough inwards to get the belt on.

To get the hoses off, you may need to break the seal by inserting a hooked tool between the hose and the fitting and running it around the circumference of the fitting. I use some silicone grease (silglyde) when I put the hoses back on to keep them from sticking in the future. 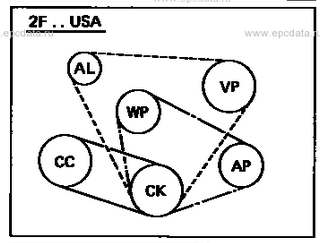 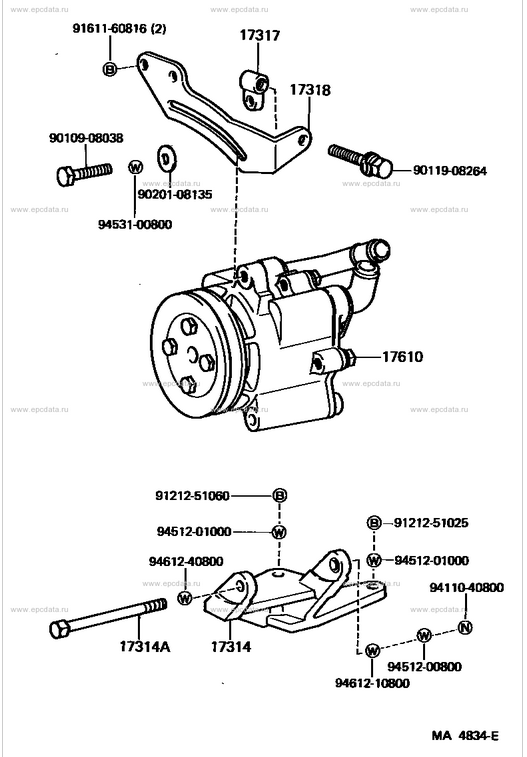 Thanks! This gives me a good start. I guess I’m in the market for and OEM pump and eventually a rebuild.

In the meantime, I will try removing the hoses and see what that does for me. The belt is so tight that, after removing the bottom mounting bolt and using a pry bar to get it on, I can’t remove it either. This also makes me think that maybe I was sold the wrong size belt, so I’ll double check that now that I‘ve confirmed it shouldn’t be this hard.

I don’t have the spacer, so that may be my next problem. So far, though, I haven’t been able to get the pump and the mounting bracket aligned enough to put the bottom mounting bolt in more than the depth of the mount itself. Here’s hoping I’ve lucked out and the spacer is still on there... since I drove the vehicle around a bit I’m not confident I’ll find the spacer hanging out in there.

Thanks again! I’ll report back when I get back in there.

Since you had the belt on the pump at some point, it seems likely that the new belt is the wrong size--maybe for your pump. Rebuild pumps from Cardone, etc., these days don't always start with the correct core. They sell you some other pump and modify the inlet and outlet connections to "work" with the FJ60 set up. But if the pulley is a different size, then maybe a different size belt is needed. Do you still have the old belt and can you get the part number from it?

2mbb said:
Since you had the belt on the pump at some point, it seems likely that the new belt is the wrong size--maybe for your pump. Rebuild pumps from Cardone, etc., these days don't always start with the correct core. They sell you some other pump and modify the inlet and outlet connections to "work" with the FJ60 set up. But if the pulley is a different size, then maybe a different size belt is needed. Do you still have the old belt and can you get the part number from it?
Click to expand...


Yeah this one didn’t start with the correct core - it has a funky additional hose attached with an inlet at the end. It didn’t come with a pulley so the OEM one is still in there. I remember that I struggled with the belt when I first installed the cardone, and remember thinking about putting on another sized belt (and maybe the cardone guide gave me instruction to do that?), but I’m not sure. When it broke, the belt got shredded and I didn’t think to keep it to check size/part number before tossing it out.

FJACS said:
And the crank pulley!
Click to expand...

Your right, he may not have picked up on that.....
You must log in or register to reply here.

Saginaw PS Bracket in factory Smog pump location -- who sells one in 2021?