We’ve had Chester since the summer of 2003. In the early 80’s one of my room mates bought an early 70’s pig to take to his lake house west of Ft. Worth. It was the ugliest damn thing I had ever seen with its blue/white paint job but it would go through almost anything to anywhere we wanted to go. I really liked that truck. Fast forward 15 years…

Looking to replace a wrecked Cadillac for the wife we purchased our FJ62 in 1989 and were hooked on Land Cruisers. It just took me about 14 years to get the itch to have a pig. The stars aligned in the spring of 2003 and the quest began. Hours were spent scouring the internet to find the perfect swine. I wanted a nice pig that was mechanically sound with a strong engine and no rust (yes, I was very naïve in those years).

My first real hit on a nice 79 pig came through VOR in Grosse Point, MI. After a few phone calls with VOR I flew to Detroit to inspect a nice 79 pig. The blue/white 79 pig needed brakes and exhaust work but had factory power steering and non-working factory A/C. The only problem was that Greg couldn’t produce a title for the truck. After screwing around for 5 weeks waiting on a valid title I gave up, got my deposit back, and started looking again.

All of two days go by and this really nice 78 FJ55 pops up on e-bay. Then I get a call from the wife about a really nice FJ55 on SOR’s web site. I tell her about the really nice 55 on e-bay and she tells me to check out the pig on SOR. Damn if they aren’t the same truck! I pick up the phone and talk to the owner in Des Moines to find out more about the shape of the 55. He had the truck for 2 years after purchasing it from a landscape architect who used it an attention getter when he drove from job to job. The landscape architect had purchased it from a company in California and had the local Toyota dealership make over $7k in repairs to the truck including adding power steering. Also added were alloy rims and new custom stainless steel bumpers front and back. All the receipts were available for the work from the dealership. 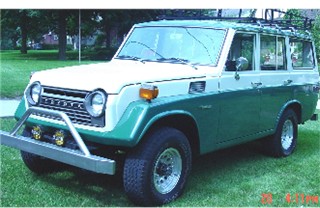 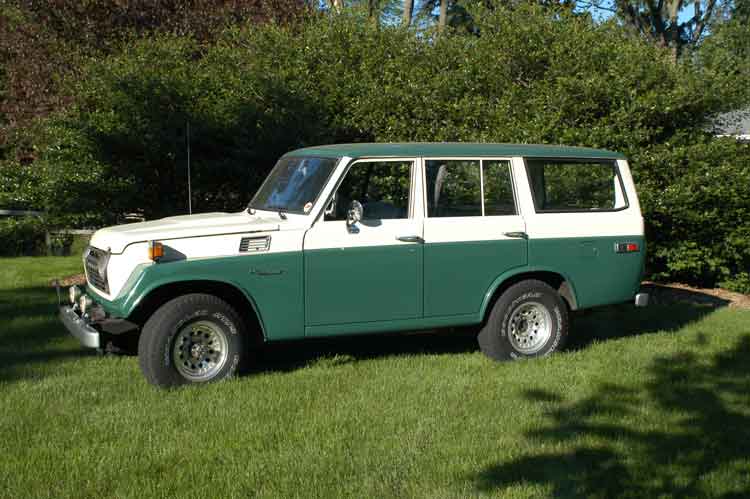 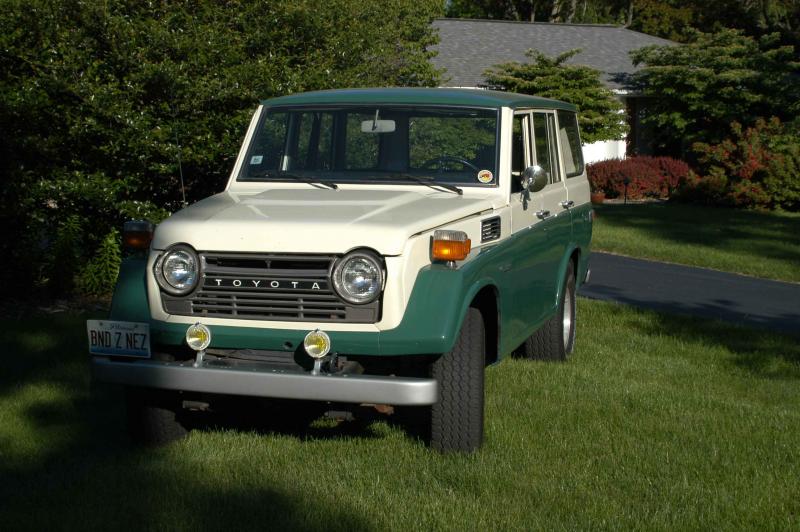 After talking for an hour I offer that if he’s willing to suspend the e-bay auction that I’ll fly to Des Moines the next morning with a cashiers check and buy the truck if it’s as described. I make reservations for a one-way trip and call back with the flight info – he’s still in disbelief. The next day I’m waiting at the Hampton Inn in Des Moines when this beautiful green/white pig pulls in under the canopy. After an hour or so of driving the pig around a bit, checking the body, frame, drive train and reviewing the documents for the recent repair work I’m the proud owner of a green/white 78 FJ55. I elect to spend the night in Des Moines and not chance a 300 plus mile trip back to Chicago with a truck that I really know nothing about – this would be prophetic.

Next day I’m up early and on the road by 7:30am after check the fluids and gassing up. About 20 miles out of Des Moines I run into a really nice thunderstorm. Warm August morning in a pig without A/C = a nice sticky ride. Then things start happening. First the PS windshield wiper stops working then the truck starts lurching and bucking and won’t run much above 30 MPH. So now what? I head back to Des Moines to find the Toyota dealership that had worked on the truck. Three hours later with a jerry rigged fix to the carburetor and the nut for the windshield wiper tightened down I’m back on the road – only 330 miles to go at 55 MPH. Ah, the joys of being a pig owner.

All’s well until I get to DeKalb, Illinois (mile 270) when the carburetor takes a crap again. The accelerator pump had given up the ghost and the only way I could get the truck to make any speed at all was to continuously pump the gas pedal. I needed to make it 60 miles and didn’t want to arrive home on the back of a tow truck. I get off the interstate and take 2-laners the rest of the way; 2 hours later I’m home with a bug covered pig and cramps in my right leg.

So what had I just bought? It appears that the company in CA where the landscape architect purchased the pig from was TLC from a print ad that was in the document folder. Nice! The pig itself is a 78 with California emissions and a build date of May 78. The interior had been completely replaced; new seat covers for the bench style seats but no seat belts, new black head liner (what were they thinking) and new door and cargo panels that were screwed into the respective sheet metal. Under the hood was a partially desmogged 2F, earlier air cleaner with out the nipple for the distributor vapor pull off painted a sort of steel like color, a new FJ60 power steering set-up in place of the air pump and a leaky radiator.

So over the last 6 years Chester, (so named for the fine swine that are popular in Iowa, Chester Whites – only suiting wouldn’t you say) I’ve replaced the door/cargo panels with originals, added seat belts front and back, added the OEM fog lights and switch (thanks to Mot and Landpimp), replaced the radiator (thanks Gumby), got the carb cooling fan to work (replaced the fuse under the dash), added a 0-4000 RPM tach, replaced the air cleaner housing with a proper one, replaced the stainless bumpers with OEM’s, had Jim C rebuild and properly desmog the carburetor, got the rear heater to work, hooked up the license plate lights and repaired a hacked trailer light set-up, fixed a leak in the gas tank, installed the interior dome light, added a stabilizer to the drag link, replaced both the alternator and voltage regulator after the alternator died, replaced the starter motor, made up new battery cables and finally put a new head on after a crack developed several years ago for some unknown reason.

Everything on the truck works except for the smog computer (no longer connected) and the seatbelt warning buzzer (who cares). Currently the odometer shows approx 86K miles but who knows if that’s 180k or 286k?

The to-do list includes replacing the alloy rims with steelies and hub caps, new pizza cutters to replace the Bridgestones, replacing the black head liner with a white/tan one so it doesn’t’ feel like I’m driving in a cave and maybe replacing the vinyl on the bench seats with an OEM replica if Shane ever finish that project.

Thanks for letting me share my first pig. Pig farming is an addiction… I’m always looking for another swine to add to the pen. 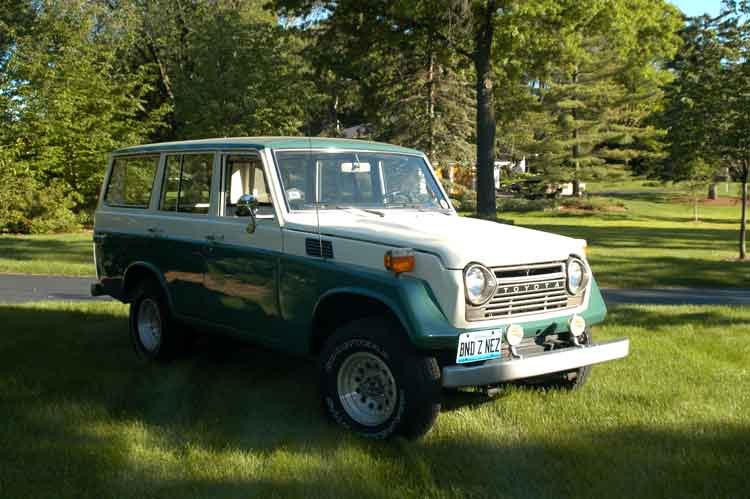 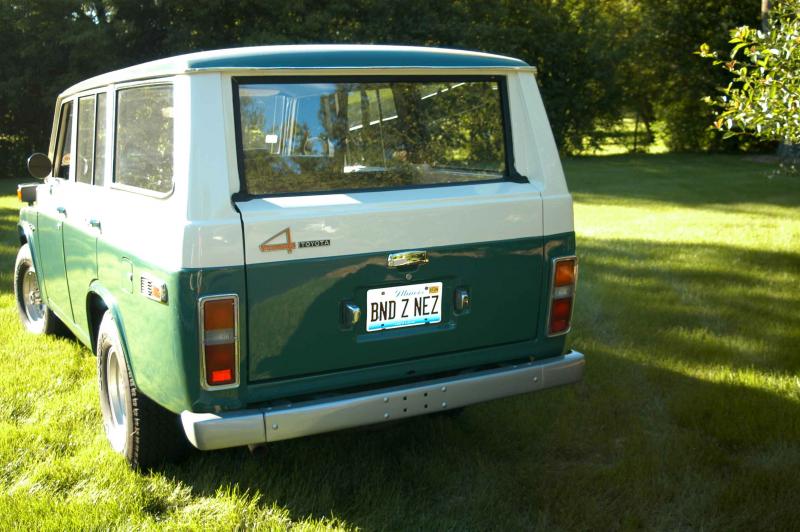 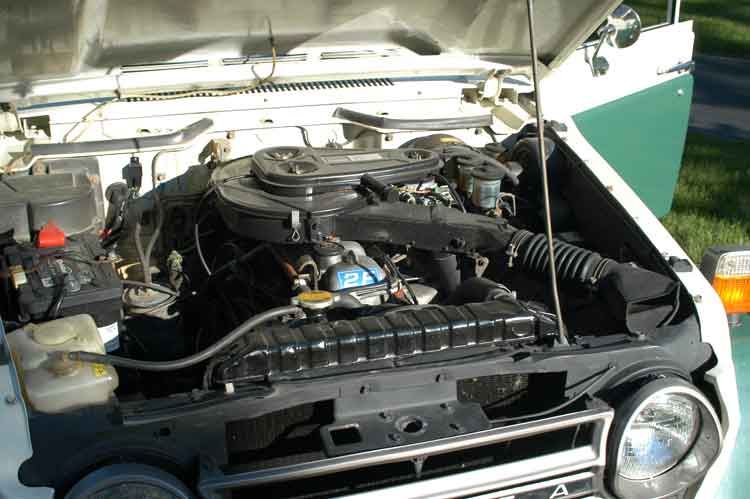 Nice to see a local pig. Especially one that is more on the original side of things. Great story and great truck you have there!

great lookin piggy,,, all these stock and restored lookig pigs really make me want to get another to restore.

Beautiful Pig. Nice job reverting back to OEM stuff... can't wait to see it with the rims and caps.
1977 FJ55 Lily-Princess Pig
http://forum.ih8mud.com/fj55-iron-pig-preservation-society/110694-new-life-old-pig.html

Still got a bunch of stock pig parts at the shop.

I just tossed a bunch of 40 stuff last week.

Really a great story and the pig is easy on the eyes.......will have to search and see if you have pics of "Arnold" posted. Thanks for sharing your story, dave

Love a pig in green! Great lookin ride.
I've chosen to ignore the pile of receipts...but I know it's growing...

Who stole my 2F 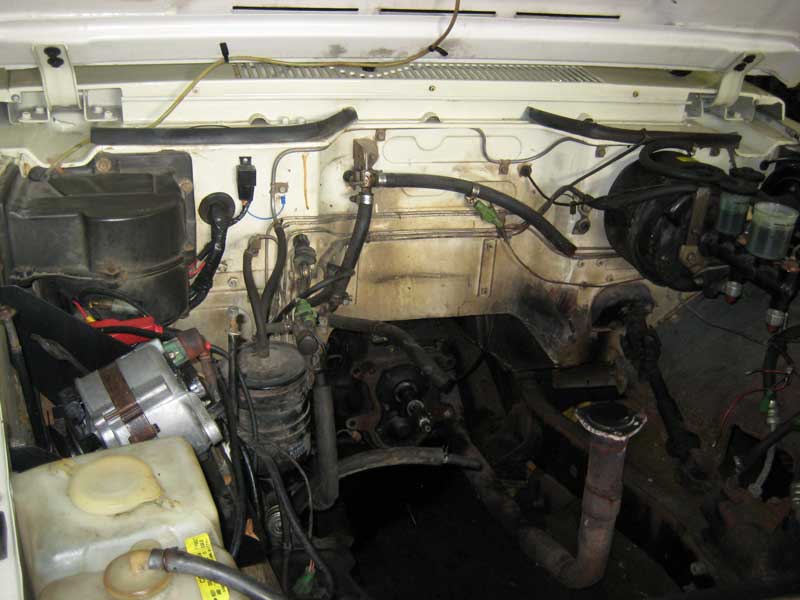 Getting close. A little lipstick on the ol pig so to speak.

The problem is/was that I lost the exhaust valve seat in #5 which resulted in bent valve. Apparently the machining was a bit sloppy and over the 2500 miles that the head was run and the seat dropped out. The ticka, ticka, ticka that I thought was a lifter wasn't after all.

So what do I have now - 78 2F .040 over - new pistons, crank, lifters, valves and seats. Oil pump checked out fine. Plus a paint jop for the engine comparment and engine. Since Chester is desmogged anyway I'm going to loose the EGR and last little bits of emissions junk.

I should be on the road mid next week. Can't wait. 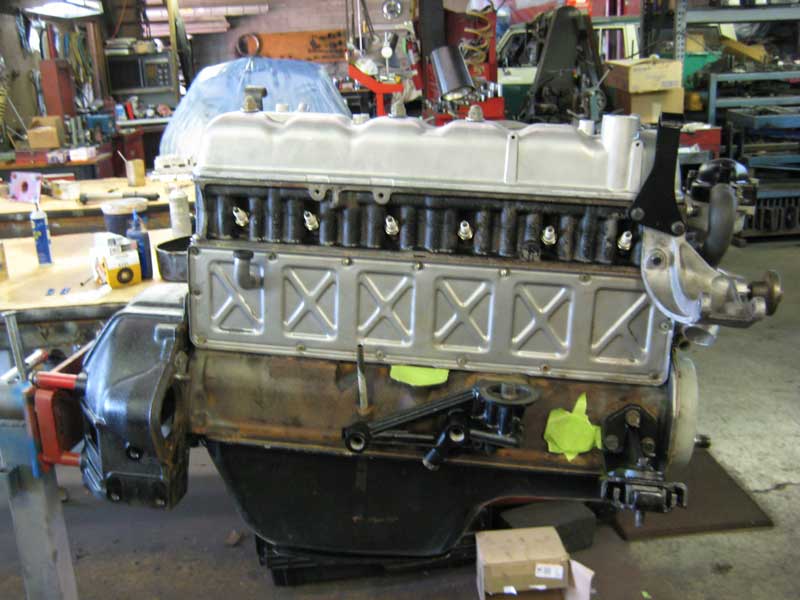 Pig Party 22 T-Shirt Orders ( Final Orders due by June 8th) . Anything ordered after today will ship after July 17.
2