My mobile base camp build

So I really love the concept of an expedition type trailer setup, but I wanted to have the ability to have everything an expo trailer has with the ability to haul cargo/an atv/dirt bikes/etc. The following will document the build from concept to completion of what I have come up with. I'm just getting started but by the end of the thread I hope to have a comprehensive documentation of my build.

So far it's a bit more of a dream than a reality, but I hope to become involved in desert racing in the near future. Even if only in a supportive roll. I believe my 80 as I plan to build it along with this trailer will make an excellent chase platform in addition to being a luxurious back country camping platform.

The basis of my trailer is a retired service/utility body that I picked up on Craigslist. It is in my opinion almost perfectly suited to my purposes and will only require modifications to the floor and supporting structure.

I plan to utilize one side of the trailer for a full kitchen including stove, sink, refrigerator and possibly even a microwave, space and electrical permitting.

The opposite side will handle tool storage, shower, and electrical compartments. The trailer will have a full on-board water and electrical system(12/120/220V). I plan to carry approximately 75 gallons of fresh water in tanks under the belly of the trailer. This should allow comfortable showers and plenty of water for drinking/food prep etc. I also plan to carry approximately 30-50 gallons of fuel. This will serve as the fuel tank for the generator as well as an aux fuel tank for the tow vehicle. A simple fuel transfer pump will be utilized to transfer fuel from the trailer to the tow vehicle. Additionally this will allow for fueling of toys(ATVs/dirtbikes/etc) if necessary.

A large RTT will handle sleeping duties while the majority of the bed will remain open below for storage/hauling. Approximately 2' of the front of the bed will have to be sacrified for the fridge and generator to live in.

The entire trailer will sit on a scratch-built frame sitting on a 3500# axle from ABC Trailer Parts - Trailer Axles - Trailer Axle Kits with electric brakes.

A pintle hitch will be used initially for cost reasons, but a lock-n-roll or similar will eventually be installed.

Enough talking. On to the pics. 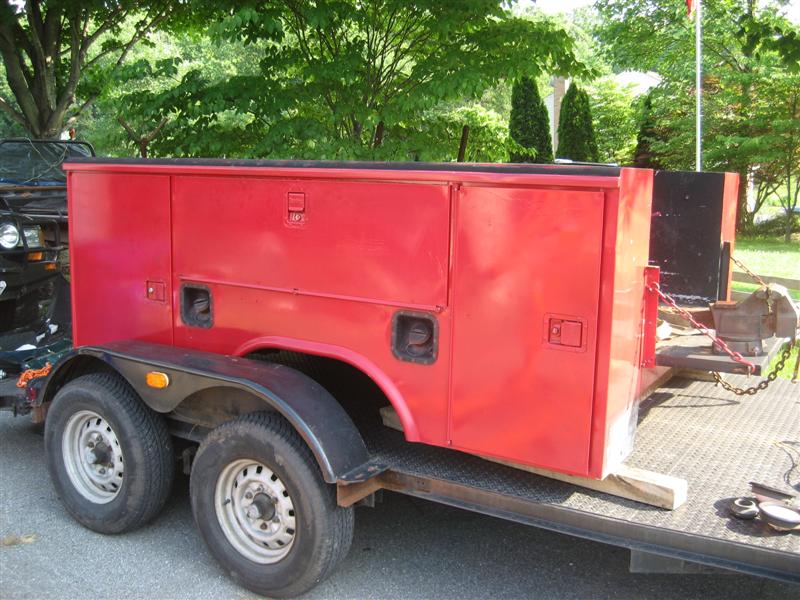 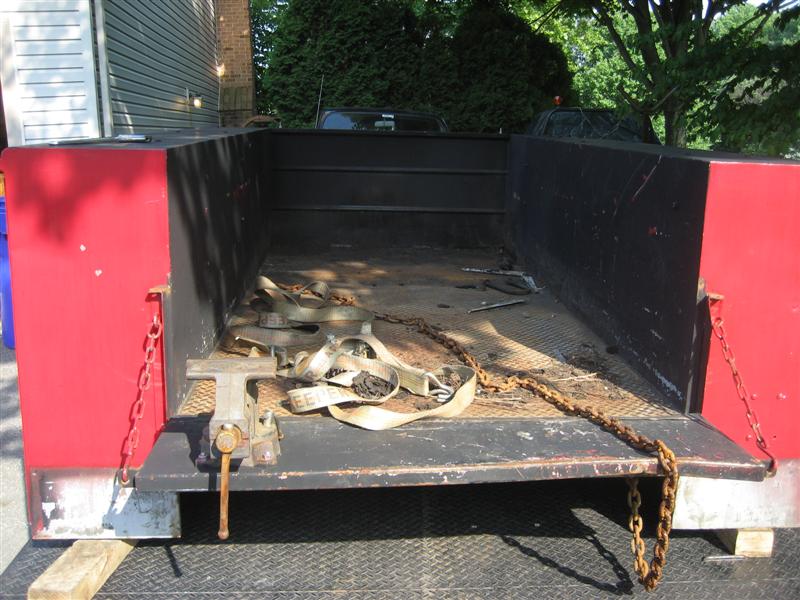 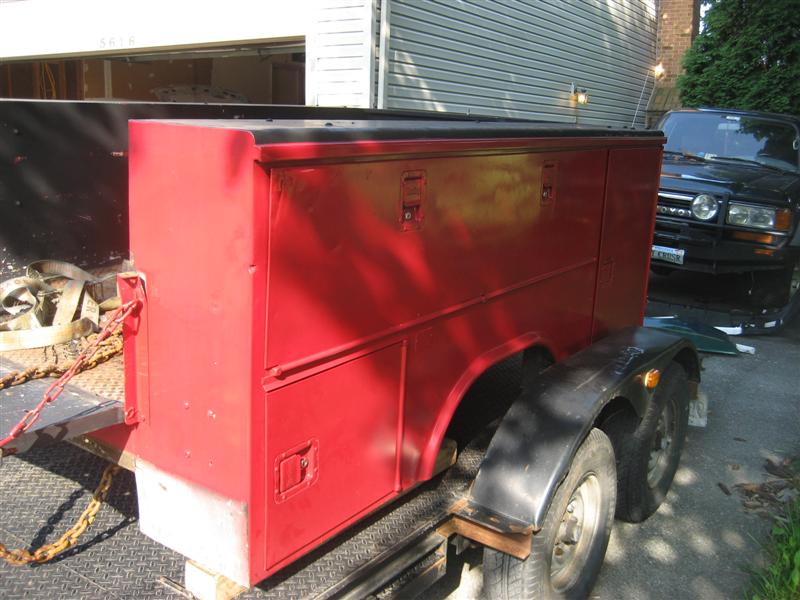 In came with a nice American made vice on the tailgate which I plan to keep as part of the trailer.

It also came with a rear bumper that has a pintle hitch on it. I won't be using the bumper, but the recessed lights and hitch will most likely be utilized. 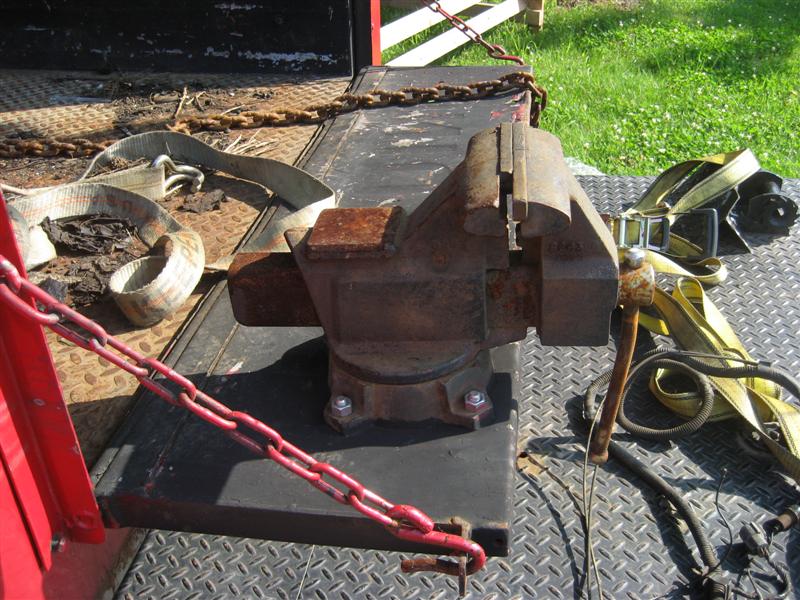 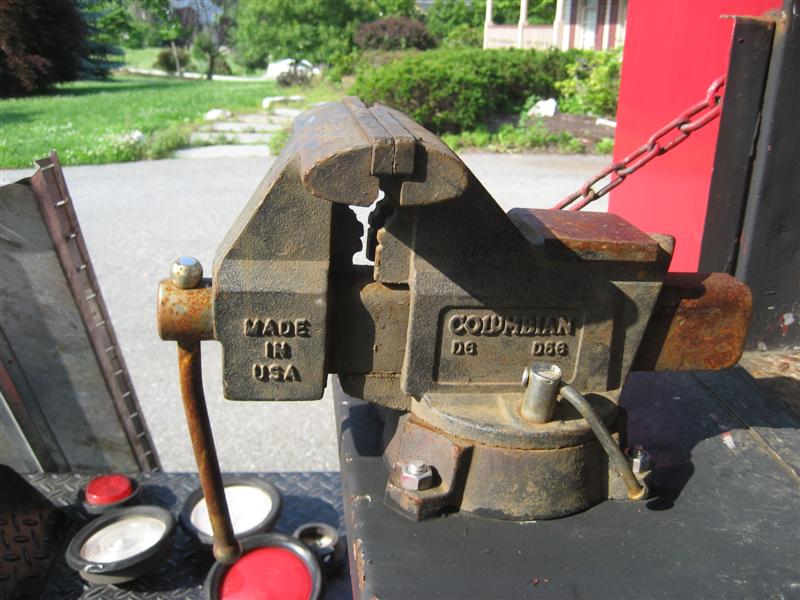 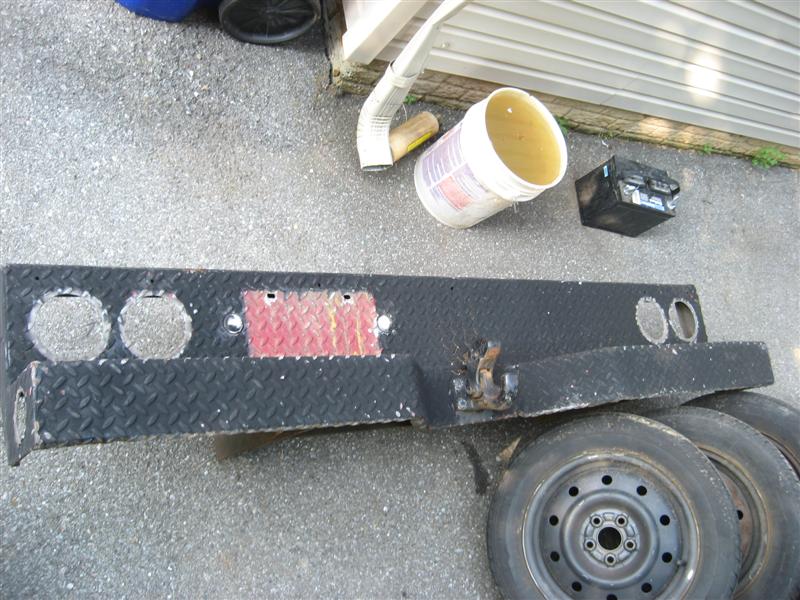 The bed sat largely untouched for most of the summer as my garage was occupied by my ex-gf's subaru that I was repairing.

I did tinker with the layout of the kitchen a bit. The bungee cord holding the stove down is temporary. The stove will be mounted to the door and although a tight fit the door does close with the stove still attached. The sink is shown in its approximate future locaiton. It will be removable with the faucet being located behind a door in the rear of the trailer. Essentially the faucet will always be accesible, but the sink will be stowed until needed. 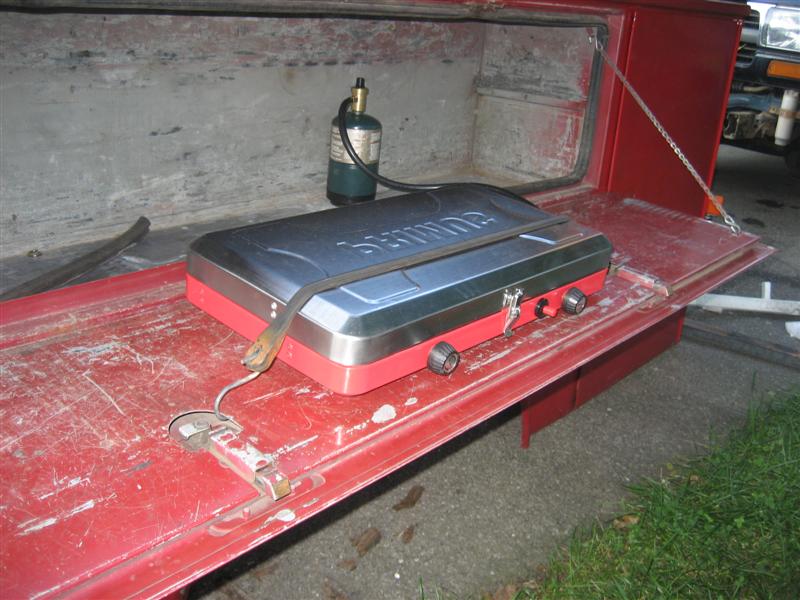 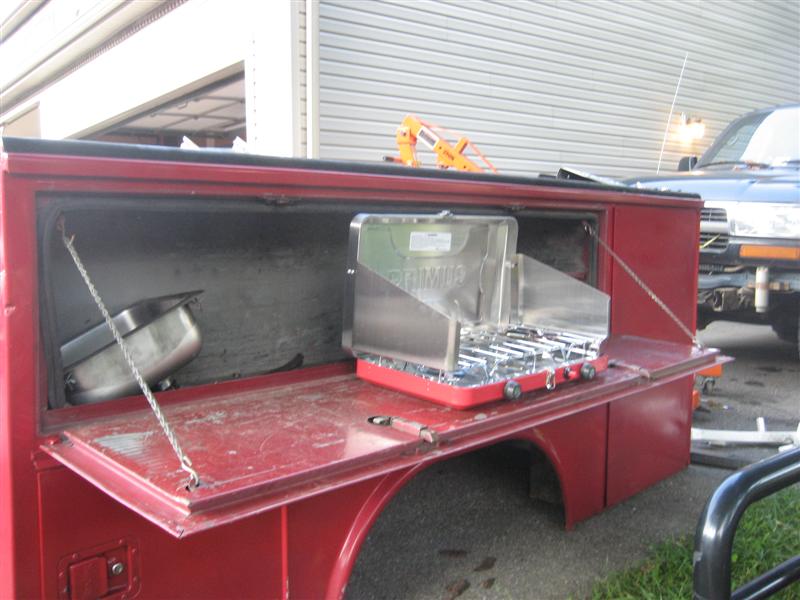 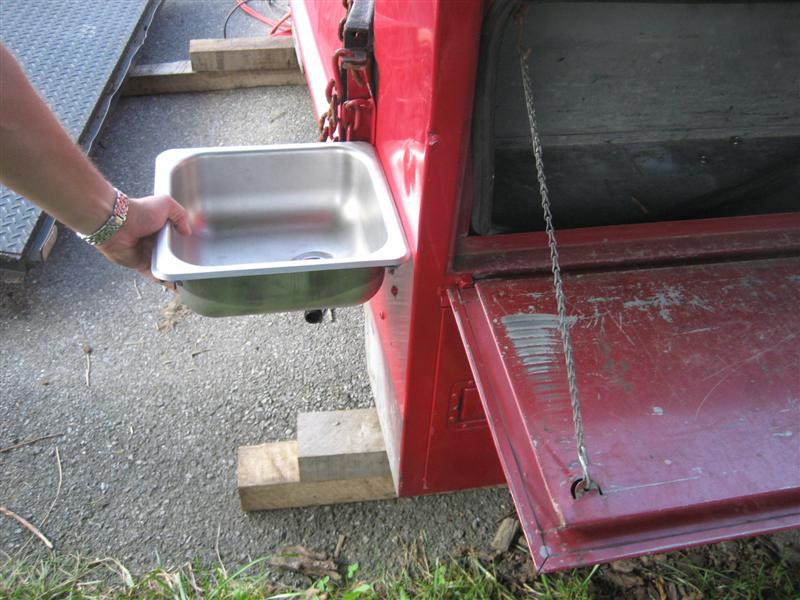 Yesterday I was finally able to clear space in the garage and wrestle this beast in there.

I weighed it using several bathroom scales and it's in the neighborhood of 7-800#'s. I hope to trim that down significantly by replacing the 1/8" steel floor with aluminum and removing a lot of bracing that will become redundant once the new frame is in place.

As you can see the axle/suspension is already mocked up. The tires are 35x12.50R16 TrXus MT's that will match what I'm putting on my 80. The plan is to carry 2 spares on the trailer and possibly one more on the truck. 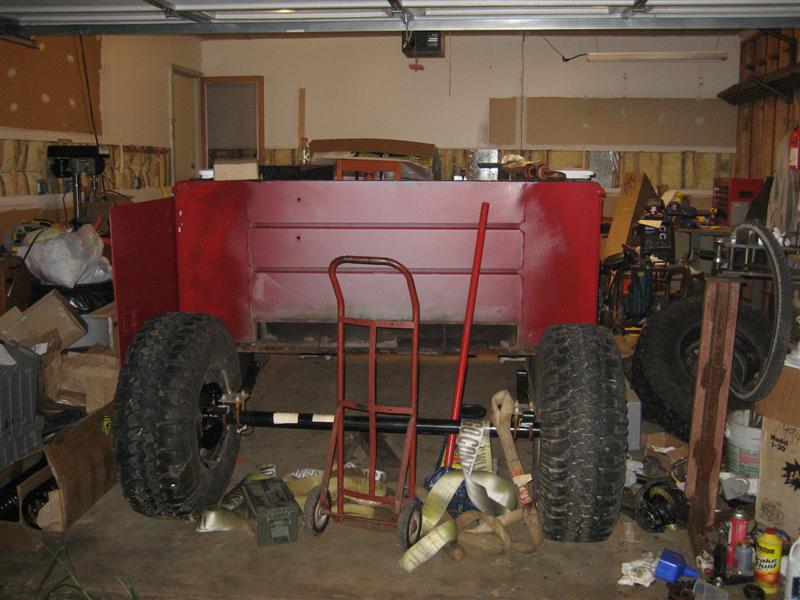 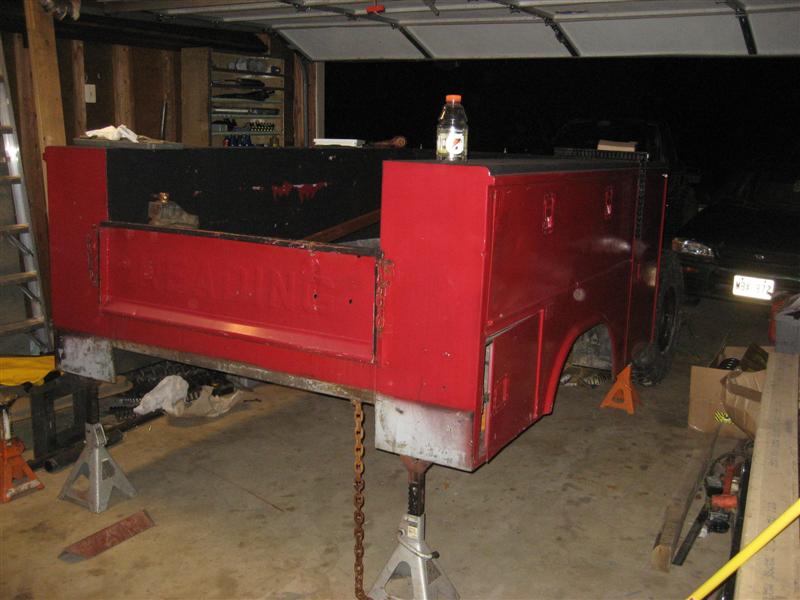 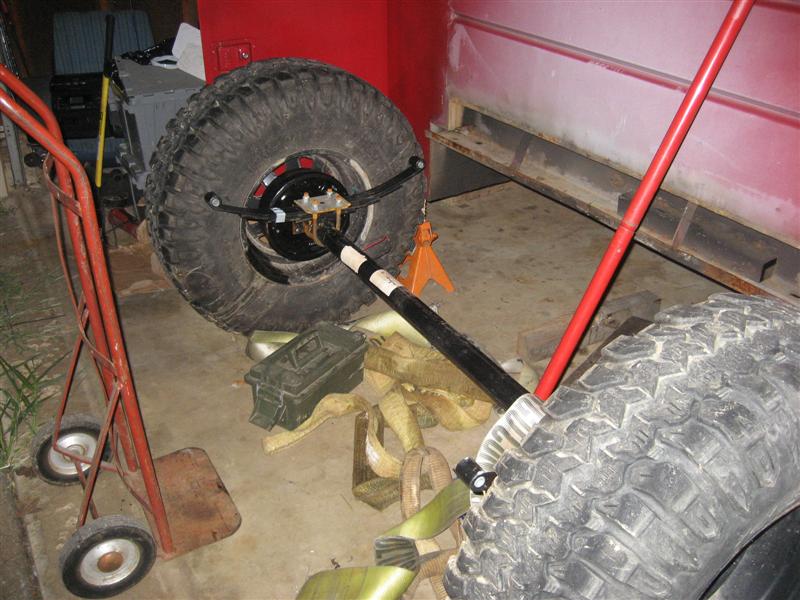 My only plans for this weekend are to watch Virginia Tech stomp Alabama on Saturday nightD). Otherwise I plan to hit this build hard and get it to a rolling chassis by the end of the weekend.
Mobile Base Camp Trailer Build

That's pretty cool. Reminds me of a sankey trailer, sort of. Looks like it would be perfect for what you want it for. I ordered the same axle kit minus the brakes from ABC as well. I'm not an expert on this but the springs that came with it, like what you have, look to small? I tossed mine in the scrap pile. Keep the pics rolling in!

Are you basing these opinions on experience or just looks? I agree they look wimpy, but they're the same as the springs on my car hauler which holds up my 5000# mini-truck just fine...

I'm not set on keeping these, but I do already have them. I would eventually like to go to an independent suspension setup, but want to do leaf springs for now to get moving with the rest of it.
Mobile Base Camp Trailer Build

looking forward to seeing what you do with this - I almost bought one of those beds earlier this summer to do the same thing, but my brother convinced me it'd be too heavy, and my wife convinced me she'd divorce me if I started any new projects before getting rid of some old ones.
1989 FJ62 * OME Lift * 33x12.50 BFG AT's * Interco Birddog wheels * 4.88 gears * Period correct Smittybuilt bumpers

Arya Ebrahimi said:
Are you basing these opinions on experience or just looks? I agree they look wimpy, but they're the same as the springs on my car hauler which holds up my 5000# mini-truck just fine...

I'm not set on keeping these, but I do already have them. I would eventually like to go to an independent suspension setup, but want to do leaf springs for now to get moving with the rest of it.
Click to expand...


I'm no expert on this. I'm just basing this on looks? We did order 3500# kits so it is supposed to work? I used mine on my M416 and decided to order original springs for it that are a lot bigger than the kit came with. I'm think that if we are going to do any kind of offroad the longer the better? Just my 2cents.

Dieseler said:
They may take the weight but on the off road they will hop more than a longer soft riding spring.
Click to expand...


Gotcha. Yeah, when they arrived I was like WTF are these things? but then I crawled under the car hauler and they were pretty much identical so I figured they'd work. I'll probably tack these in for now to get it to rolling status and search for some alternatives in the mean time.
Mobile Base Camp Trailer Build

I recently found this on CL

Its brand new but does appear to be missing the bumper in the rear. I am thinking about doing something similar. Do you think it could be cut down and narrowed?

Depending on your fabrication abilities, narrowing it should be a relatively straightforward task. Shortening it would be a rather arduous undertaking and I'm not sure I would want to mess with that.
Mobile Base Camp Trailer Build

I am looking forward to using you as the guinea pig. I am curious to see what it looks like rolling and behind a rig. Keep it coming! Do you know of any links to projects similar to this. I didn't find any.

I've only seen one other person do this. They had a brief build thread on expeditionportal but that's the only other one I know of. Last I saw he hadn't really outfitted it so much as just made it a trailer.
Mobile Base Camp Trailer Build

Ok, I found the other build I was talking about and I guess he did outfit it a bit more than I thought, but still not what I have in mind.

thanks...I didn't have any luck finding that.

gaberelli said:
I am looking forward to using you as the guinea pig. I am curious to see what it looks like rolling and behind a rig. Keep it coming! Do you know of any links to projects similar to this. I didn't find any.
Click to expand...

This isn't a f”ing hobby. This is the lens through which I see my entire world. Driving and living Land Cruisers is in fact life. It is vitality in the bulls*** world that everyone else wants us to buy into. Land Cruisers are the way the world should be. We are just the lucky ones to realize it. -Beno
You must log in or register to reply here.