Ok ill try to include all the pertinent info here and hopefully my curse of horribly titled threads wont continue. Im really just looking for opinions of those that are more familiar w/ these beasts and might have had a similar problem; or suggestions of next stage of diagnosis.

HIstory: Ive had the cruiser for a year now and have redone the PS system as well as the clutch now, and then just small issues beyond that.

Issue: Last fall i had intended to tow the pig to the Pumpkin Pig Run in the NC mtns. Well when the towrig plans fell through i dove in the day of departure and changed all fluids (motor,diff, tcase,tranny, and brake as well) checked the nuts and bolts, crossed my fingers and headed out. 7hrs later i was there, but the issues had begun. On the climb to the cont. divide on I-40 i started to get a knocking noise only in the higher end of rpm band. I stopped and rested but being 5.5hrs in i continued on. I got a couple days of trail in before it appeared the clutch was not holding for the hills, so i got out while i could and had the pig towed home.

sorry, so the issue is a pretty loud knocking noise as i get up to speed more than up to rpm. the symptoms occur in first while accelerating, second not so much, third ABOVE 40 ONLY, and fourth gear ABOVE 50mph only. You can put as much load as possible on drivetrain, but it will only occur once up to these speeds? once at 50mph in 4th you can let off and it goes away and when barely feathering the gas (if still at speed) it comes right back, no hesitation, w/ very little load on the system. It does not happen while revving engine in neutral. I can feel a knocking in the t-case by touch while driving. Starting to believe it might be a t-case issue but it will still Knock in nuetral, with the clutch in??

What ive done: I inspected clutch for a bolt backing out of the pressure plate, no luck, but i went ahead and replaced the whole clutch assembly. I dropped each drive shaft and inspected U-joints (they feel good to me, but ive never felt a bad one) but they do not have excessive play. The key fact that stands out to me is the noise goes away when i drop the rear shaft. This leaves me to believe that the issue may be w/ the welded rear.

other thoughts: i had two other cruiser folk look at it and one believes its and exhaust leak and or rattle, the other thinks its in the t-case/tranny. I do have a leak at the union of downpipe and exhaust manifold, but after 1/8th mile of wire wrapping i feel it is not a exhaust rattle. now whether its me hearing the exhaust cylinders open/shut i dont know, but i doubt it.

With the noise gone when i pull the rear shaft, could this be a broken spider gear weld? or worse? I wouldnt think it would be intermittant and speed variable if something was floating around in the diff.

Thanks in advance guys and sorry for the mini-novel. I do plan on putting her up on stands and dropping the diff cover for a looksee when the rain stops.

Sounds like a tooth broken off on your pinion gear.

Does the sound change if accelerating vs decelerating?

It could be related to spider gears... don't know for sure.

thanks, that will be my first place to check. SO with the rear suspended and the t-case in two high i should be able to rotate the wheels and inspect the gear all the way around.

The noise goes away if you let off the gas, reappears as soon as you touch it (even w/out a heavy load) as long as you are still at the speed that initiates the sound. Only other similar noise i have heard was a very low knocking as i was in nuetral, w/ the clutch in turning into a neighborhood, and that is what made me think its not in the tranny or t-case if this noise was present while in Nuetral, but feel free to correct/educate me.

It does seem a bit less persistant when cold but as the truck/mechanicals warm up it grows louder.
... Jason ...
95 FZJ 80 -- weekend escapemobile
77 FJ 45LPB -- EMP and millennial proof
20 Tacoma -- DD to remain mostly stock

For me i would start with the easiest thing first. Drop the rear diff cover and see what it looks like. Aagin you might be able to see stuff when you are draining the rear diff oil before you get the cover off. Then go from there.
Now a Certified 4WD instructor for http://www.i4wdta.org/
Now on a USFS Shot crew. Blue Ridge Hot Shots.

The drive shafts were out of phase, crawling under now to remedy that and take for a spin. Im probably gonna wait for sunup to drain and inspect the diff. I was also reading of a bad/worn slip yoke; would this just be signs of wear (tapering) on the end of the splined unit?
... Jason ...
95 FZJ 80 -- weekend escapemobile
77 FJ 45LPB -- EMP and millennial proof
20 Tacoma -- DD to remain mostly stock

From what you've added I'd be even more certain.

I've got a full floater so the rear cover doesn't come off so I had to pull the diff to check it.

Draining the oil will also likely show chunks of gears although some of mine were too big to come out in the oil.
Builds - My 40 Build... 20 years and Counting... Purists beware, this may hurt
Installing an 81 hardtop onto my 74 (keeping the hatch)
Gas charged Hood & Hatch strut retrofit
Never underestimate the importance of a ground
FF rear axle, 4 discs, AIRide rear bags, ‘72 SBC, On-board air, Split hood, Gas hood/hatch struts... Restomod.

Well i dropped the diff cover and took a peek. The oil level was full and no large peices of metal; some flakes/shavings and nothing as large as a bb. However the gear oil looked like poop and it has less than 500 miles on it. Does this look like water contamination? it was raining cats and dogs on the way to the mtns but it has not seen any deep water crossings; the factory breather caps are in place and move freely but have not been extended. Next bit of fun will be getting the new studs set in the axle housing as all but two studs backed out when i was removing the cover even after a couple doses of PB over the last 24 hrs. Would it be too ridiculous to reuse these w/ locktite to allow reasembly and test drive? I dont mind ordering new, i just wonder if im done diagnosing till they get here.

The ring gear and pinion gear look great. Maybe the slightest of wear lines on the front edge(front of truck, larger dia. end of cone) of what i believe is the pinion gear but its even and not jagged or cracked. The welds are less than desireable but i see no cracks and no free floating pieces. The only irregularity i see is w/in the welded area, the cylindrical ctr piece is not touching any of the gears on either side except in one corner (upright left corner in pic 2 ) but it looks like it has worn away any interference.

I can snap some cleaner pics as it has had time to drain if necessary. 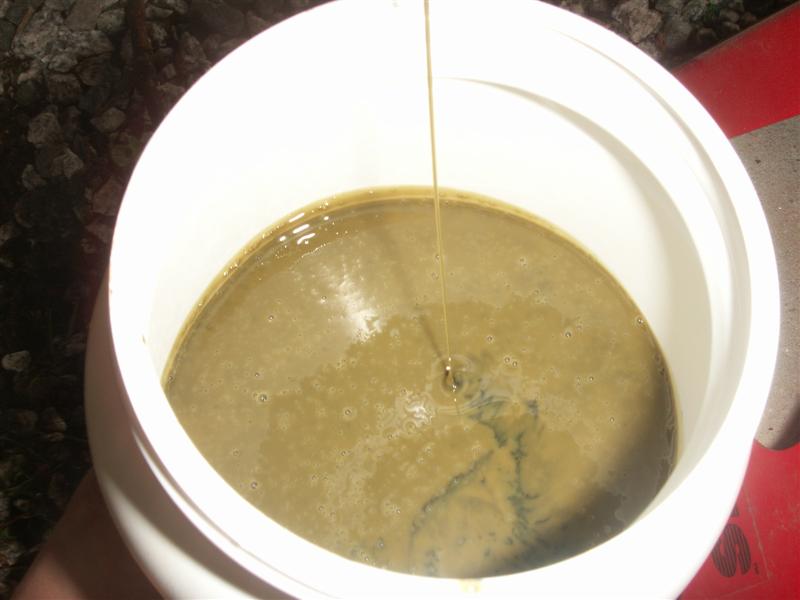 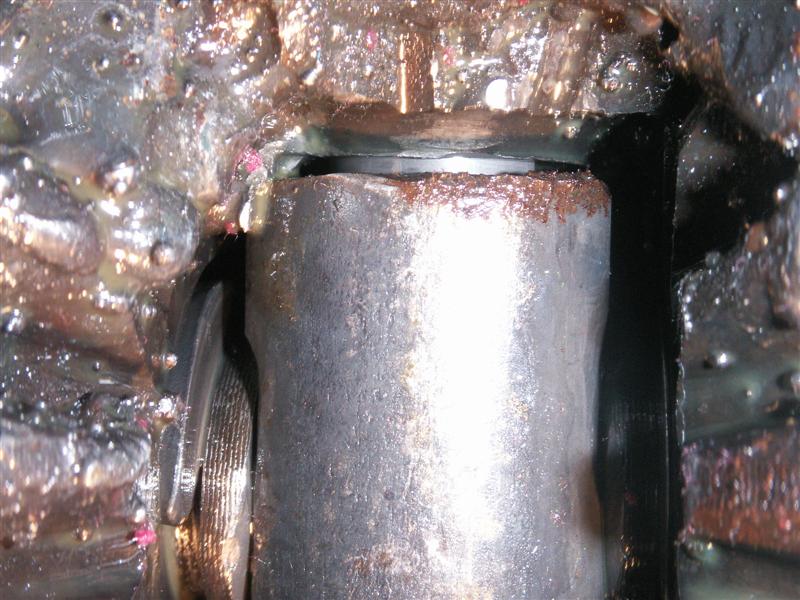 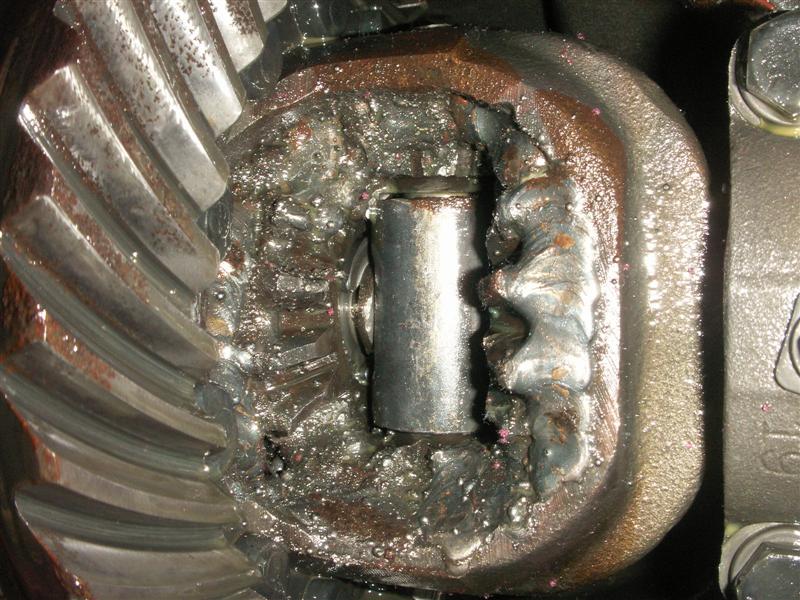 Don't know how, but it sure looks like water in that gear oil to me. Did someone borrow your rig, maybe take it somewhere they didn't tell you? Friends.... can sometimes do stupid things and not want to own up. Just an idea.
'72 FJ40 being rebuilt from the ground up. Stock F motor, Rustic Green and very nearly all back together. 3 1/2 years ain't that bad is it?

good point, the keys often stay in the car, but i dont think any of my friends have the jueves to pull out of the house into a 5 lane hwy SOA w/ a BL and no sways is kinda of an odd experience. I was looking closer at some of the corrosion inside the pumpkin and it looks like the front of the diff may be leaking although there is PLENTY of gasket material exposed both inside and out and the bolts are tight. Does this pic look like water may be coming in from this point?

Ive now pulled the pto cover on t-case and inspected and all looked fine; oil in great shape and no metal on the drain plugs or teeth missing or damaged. NO debris on the drain to tcase or tranny. Im trying to get the shifter out so i can pull the inspection cover and look at the tranny gears at the moment. 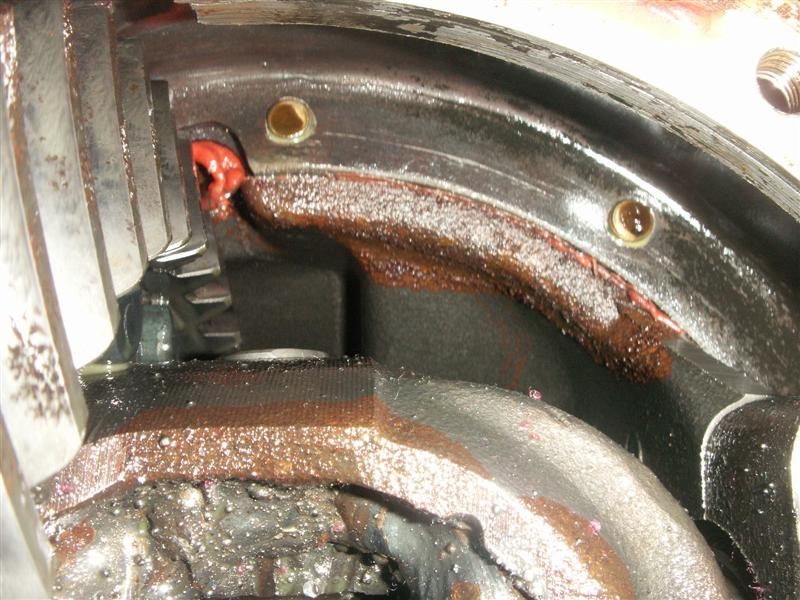 Beats me then. Do you have access to annother 3rd member to swap in and test?

Could there be a bad bering in there somewhere? (just a thought)
Builds - My 40 Build... 20 years and Counting... Purists beware, this may hurt
Installing an 81 hardtop onto my 74 (keeping the hatch)
Gas charged Hood & Hatch strut retrofit
Never underestimate the importance of a ground
FF rear axle, 4 discs, AIRide rear bags, ‘72 SBC, On-board air, Split hood, Gas hood/hatch struts... Restomod.

still lost on this one

I took off the tranny top cover and inspected the gears. They look good although i could not spin all of them to inspect both sides. ONLY one gear had any markings, the second diagonal gear down from the top in pic. The oil looked good and no metal on the drain plug. I dont have a third available but ill post up on the local site and see whos got what, but dont know how easy it will be to get those axles out welded like they are. I also checked the carrier bearings for play, there was none but that doesnt rule it out for going bad i suppose. I did find the very slightest of movement in the pinion bearing, but very very minimal (1-2mm) can only feel it, not see it.

thanks for the help and ideas, im waiting on some diff cover studs now so i can reinstall and keep searching

edit: i found a video clip where you can start to hear this knocking... not the best but all i got till i can put it back together and get a camera operator to go for a ride w/ me 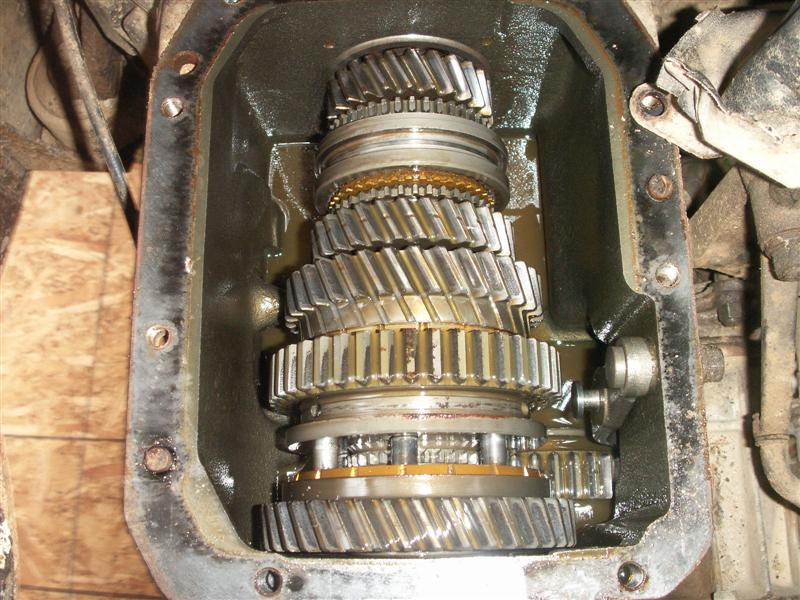