I have been curious of the origins of mybullbar. I had never seen one like it before I found mine on Ebay. Stole it with a winning bid of $80.

Since, I have seen one cruiser sell on ebay with one. It had a logo on it but I could not make it out.

A couple of weeks ago another one sold on ebay and was advertised as a "factory Toyota" bar. It sold for a whopping $426. So the question remains...
Factory or not? 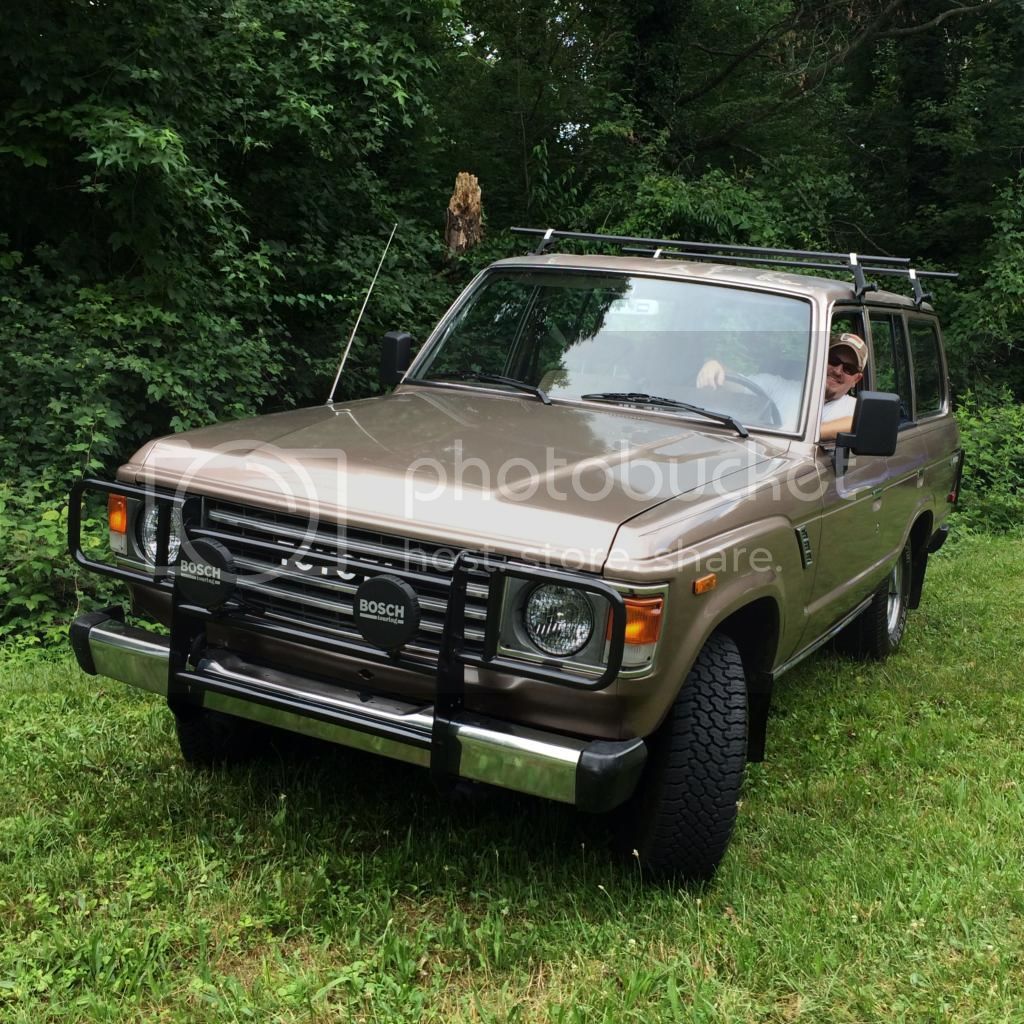 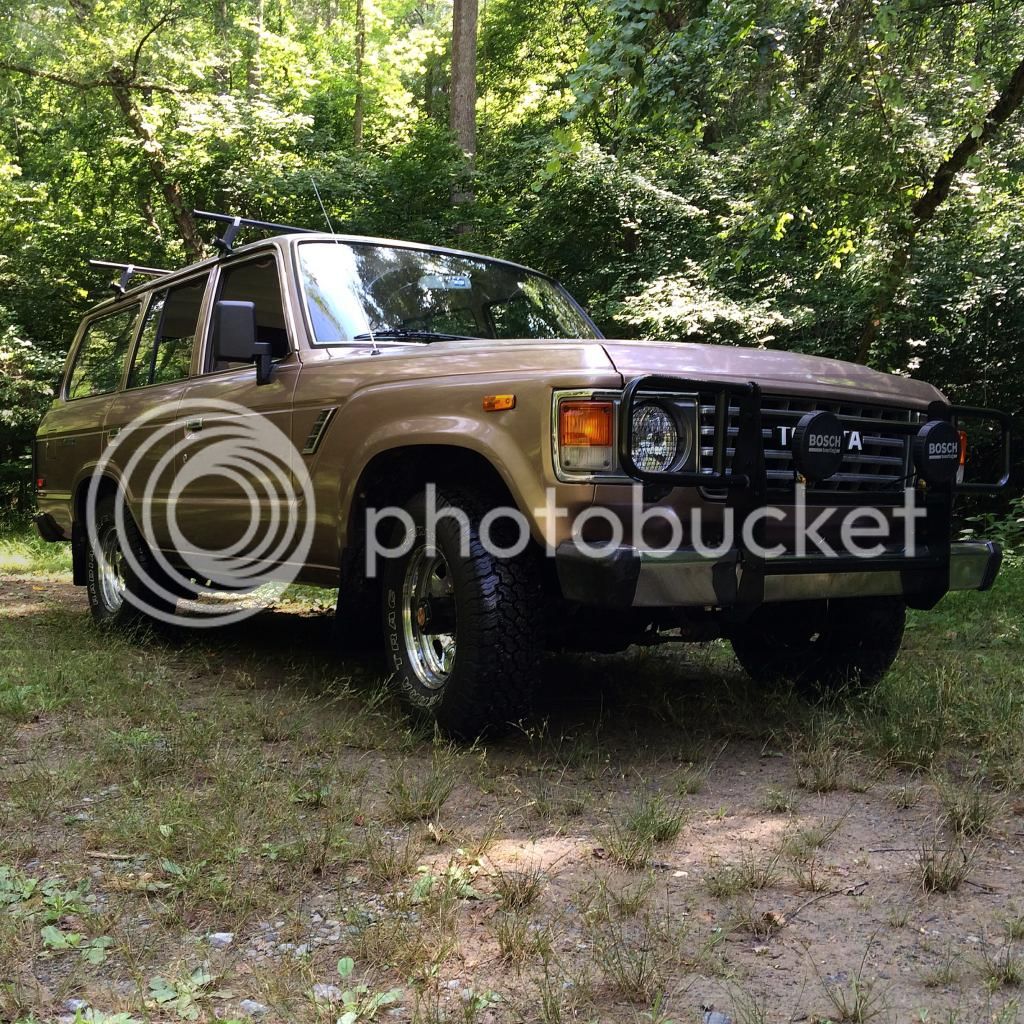 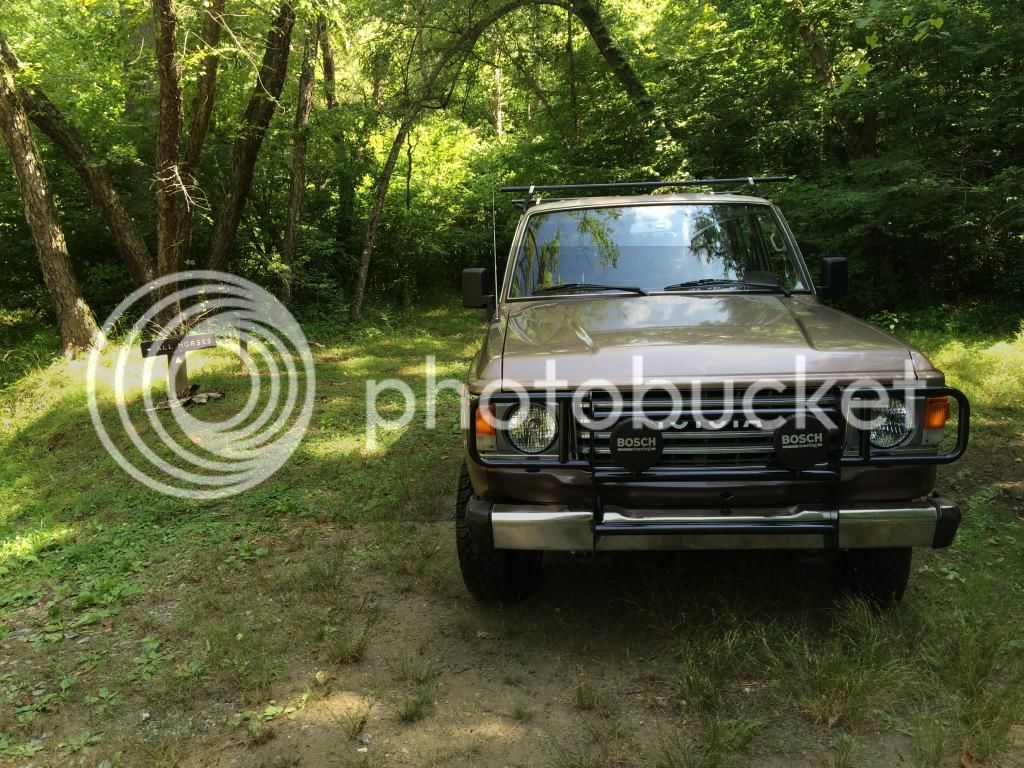 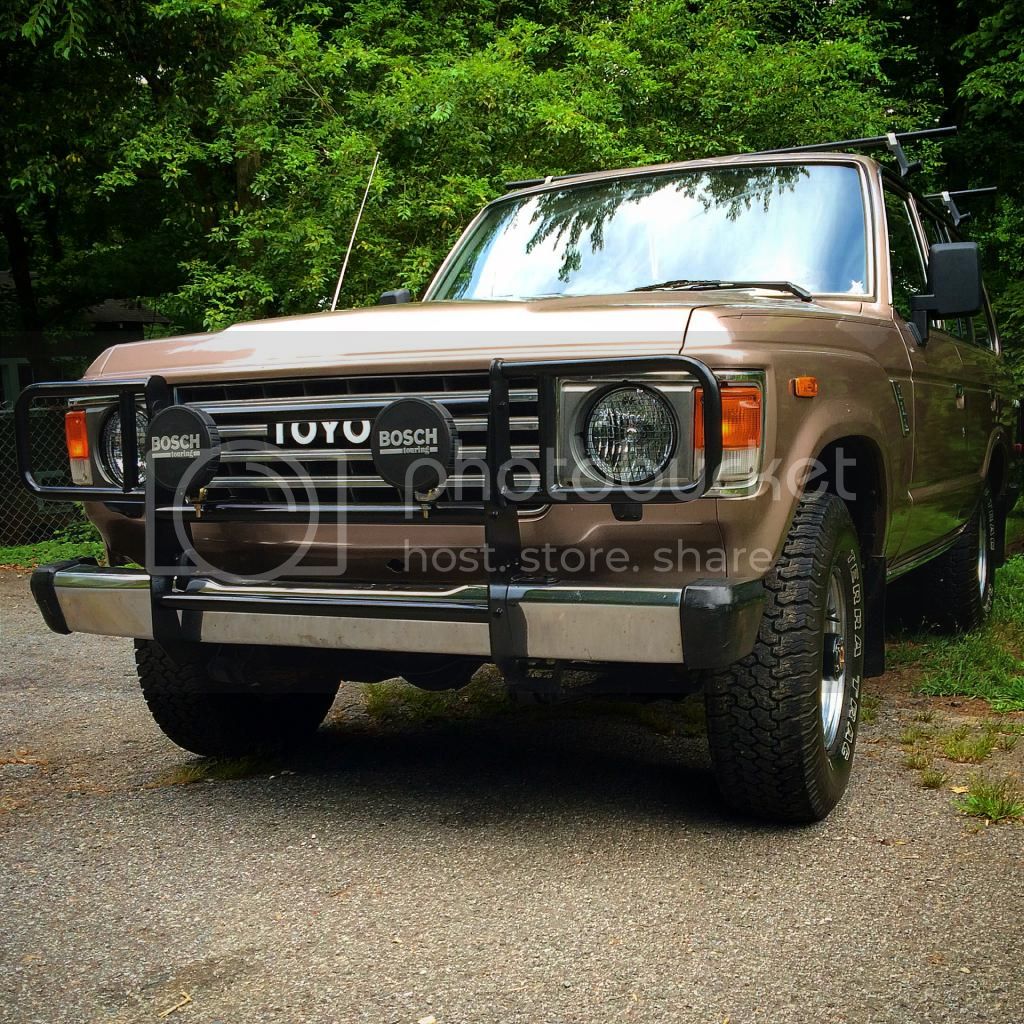 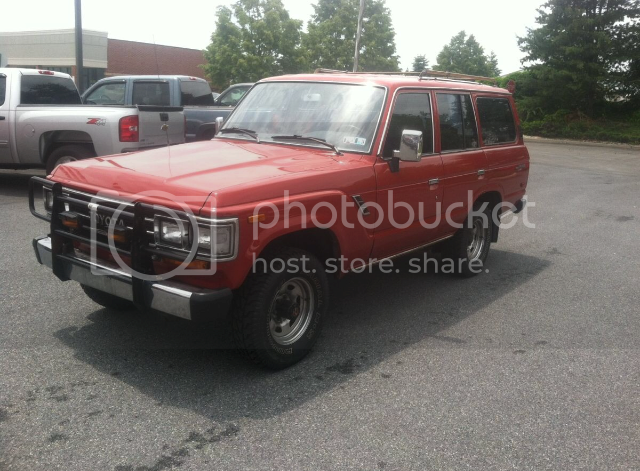 This is the "Factory Bar" that just recently sold at auction: 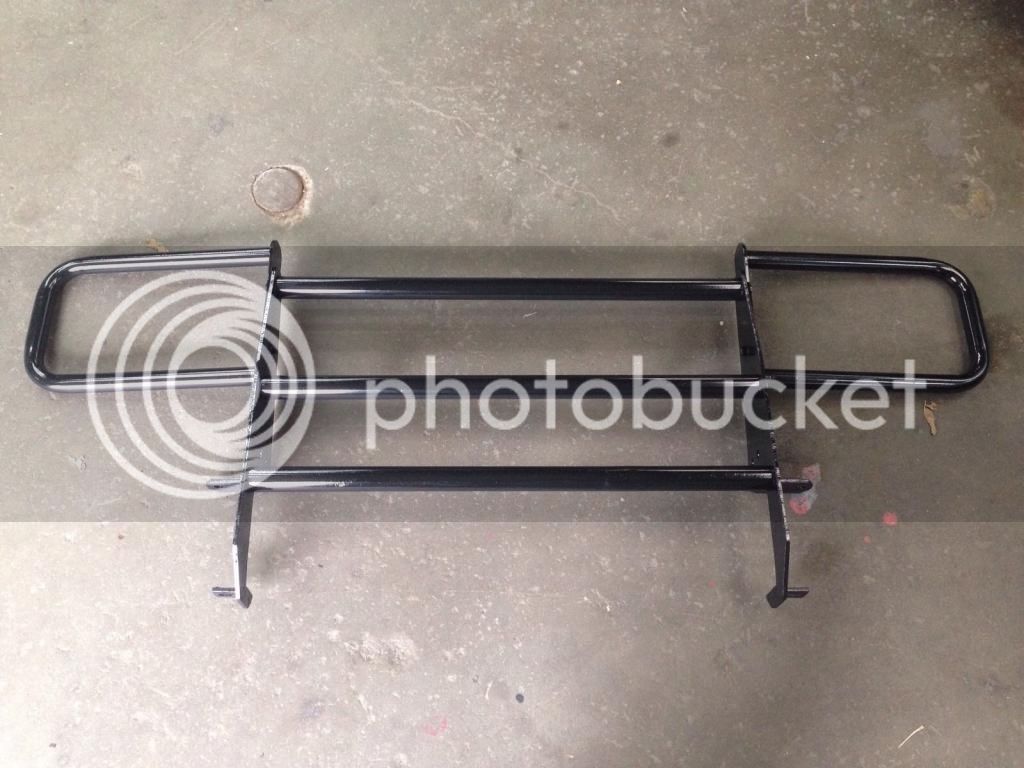 The above two are identical to mine except for the lack of vertical bars by the headlight as seen on my bar. Possibly varying the 60 from the 62 bar. The Low position of the upper horizontal plus the way they are assembled are identical. If not factory, surely from the same company.

Can it Knock over a tree without causing Damage or take out a full sized roo without scratching it? Brush guard, not bull bar.

Whatever.... It's no ARB, but I'm not wheeling my rig anyway. I'm happy with it especially for the price. It will still help in the event of a deer encounter.
J

It may be a dealer installed item but not factory.
I bought one similar for mine around 1990. It had curved end pieces though. I forget who made it in USA. 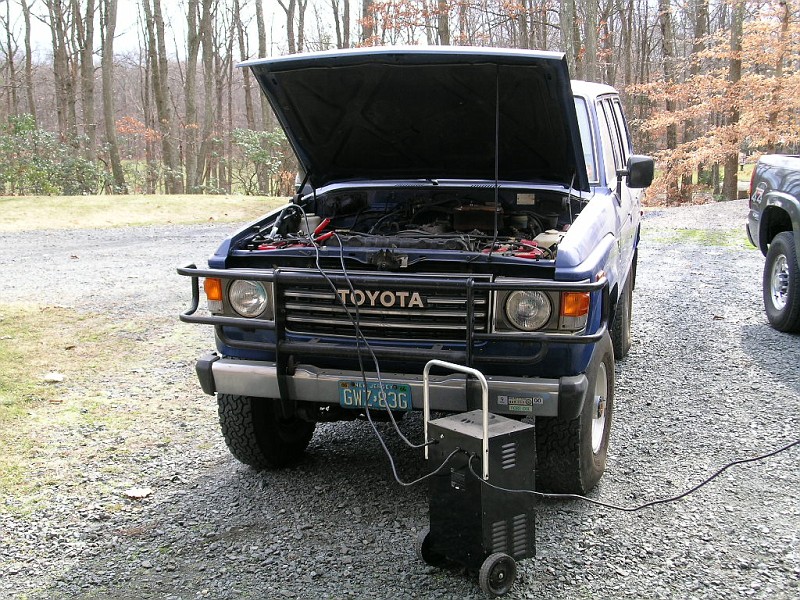 WHG423 said:
It will still help in the event of a deer encounter.
Click to expand...

It definitely will make things worse, hence the nick name damage multipliers. I will see if I can dig up some examples.

I've seen pics of said damage, it can make things worse. I have however, been in a rear end collision where a "brush guard" saved my truck in the past. Guess it depends on the incident.

Regardless, not looking for reasons to remove my bar, just looking for manufacturer info. I like my bar & it will stay.

I'd agree that it's most likely a dealership item, not factory. Looks nice and you have a really clean rig.

Those were sold by JC whitney amongst others. Made by whoever could supply them cheaply that week.
L

Looks really nice, it gives a retro-factory look. Like the old-style mesh-faced headlights

Given the look I would say it might've been offered by the dealer, but I've never seen a "factory Toyota" bar (or guard) for the 60.

The only factory modified bumpers i've seen for the 60s are the front porch's.

I want one. Looks cleaning then the bulky ARB

That looks similar to my bumper that came with my truck and was a dealer option at time of purchase. It was made by Garvin Industries that makes the Wilderness brand of racks, etc... today. This is my bumper. 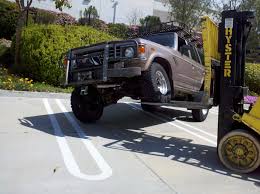 Thanks! Now that I look at some of the pics above, I do believe that bar is identical to the corresponding components on my bumper. I just have the bumper and winch stuff too.

This bumper is certainly nowhere near as strong as an ARB but for me it's like part of the truck like a door or hood. It makes up the character so it will stay indefinitely.

I feel the same way. Mine just works. It felt right, the minute I bolted it on. Kinda like it had been missing since 1986.

Go Rhino made them as well. I like them for installing aux lights without adding much weight to the 2f

bentonrover said:
I want one. Looks cleaning then the bulky ARB
Click to expand...


Looks like this guy in NW CT has one (see image #16 in CL link below). Didn't see a price listed for it, but given the prices for the other stuff, I'll bet you could get that bar for a steal.

Interesting there. That is different from mine.

I was lucky that my truck was purchased not only with the Garvin bumper but matching roof rack also from Garvin. I have roof rack off and am going to get the metal re-powdercoated and try to do something to the wood to bring it back a bit.

Thanks slow left. Cant believe I missed it. Hopefully he'll get back to me. If so Ill post back

Found another pic of the same bar. They are out there! 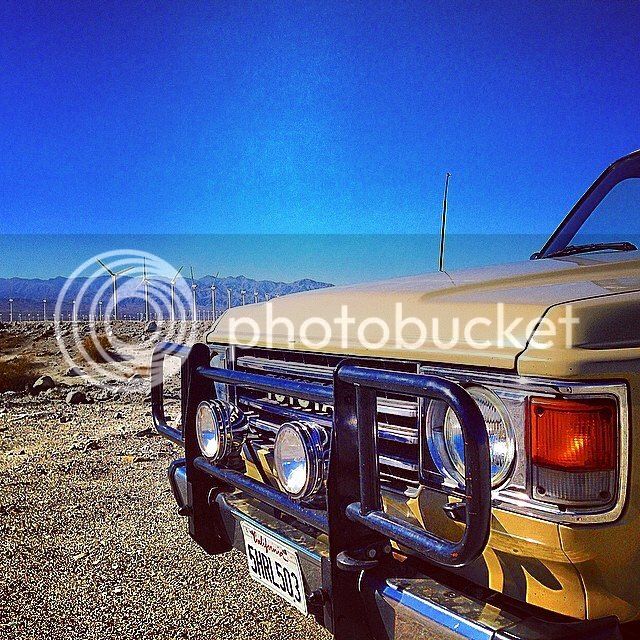