Im installing a 2 groove pulley from a 2f onto my F motor. All parts are very clean and even put a little grease on the shaft. I cant get the pulley all the way on, is there a special tool used to put it on?? Ive tried a 2x4 and a BFH still not seating all the way and yes it is lined up with the line groove.. I can get some of the thread to catch but Im afraid that if I use an impact wrench it will just turn over because of how tight of a fit it is, not to mention I would have to go and buy a huge socket..

Just finished installing a 2 groove pulley so I could finish a scout PS install. I used the socket and a bfh to drive it on as well. Worked pretty well.

Do have a follow up though. Anyone know what the distance between the block and back of the crank pulley should be? I think I have the crank pulley seated, at least it sounded like it bottomed out while driving it back on but now the alignment with the alt pulley is off. Im running (or was at one point) a 2F block in a 71. Looks like the PO used all of the bits and pieces off the 71 F engine on the 2F block. If I could drive the crank pulley in a little more, alignment would be much better though it looks like the big ole nut is fully engaged. Need to get this resolved before I mount the PS pump. 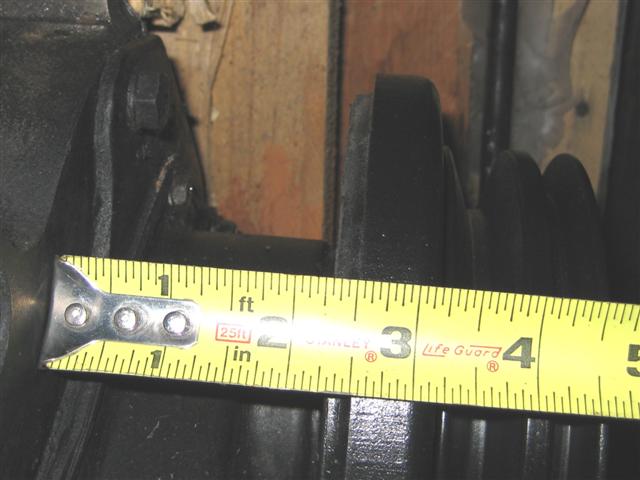 Brian,
I take it you got the pulley then? I hope it works out well for you. What type of power steering are you going with ? sag or mini? I'm going to be doing this myself in a few weeks so keep me posted on your success, Good Luck Ken
1978 (mostly) FJ-40, lift, 2F, bigger tires and custom swiss cheese body panels to reduce weight!
Various other toys 87 4runner, Motorcycles Ducati and Triumphs with an old Mach III in the mix.
G

Thanks Dave. Thats the measurement I got. Looks like Im going to take a little off the back of the F alt bracket this afternoon to move the alt forward... after the big one up at Dega of course.

Bbalbano, if you know any local farmers, you might be able to borrow the socket from them. Pretty standard size for working on tractors. They usually have a big azz cheater bar laying around too.

when i did it i used dry ice on the crank and a torch on the crank pulley and slipped it on...
'74 FJ40
You must log in or register to reply here.