Alternator Wiring - need help with what goes where

I need some help. I am building an FJ45 table top with a 2H and 5 speed in it. The 2H is out of an 87/88 (cant remember) 60 series and has an internally regulated alternator. I have the HJ47 and 60 series manuals, however the wiring diagrams are not helping me.

I need to wire the alternator, only the gregorys service manual does not have the corresponding wires to what mine has.

I have 4 wires. Big white/blue on a ring terminal, and coming from the alternator into a plug is white, red and blue. They go into the male side of the plug and the female side then changes wire colour to white/blue, yellow and yellow/blue respectively to the other wires.

Now the manual shows wires going into charge light and diodes and condensors etc. I dont have a charge light, however I do have the 40 series ammeter gauge.

From what I can tell the large white/blue goes straight to the ammeter (through the fuse box from memory) and then to the + terminal of the battery. Can anyone tell me where the others need to go? If one of the wires is to a charge light and that is its only function then can I just leave that wire disconnected? 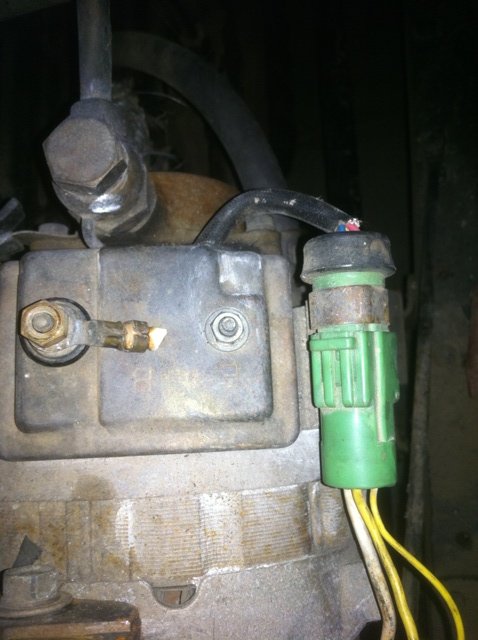 I had a Bosch alternator and posted a question here noone offerend any advice and then one day I found this nice diagram of plug types that made it all clear.

Your 40 style Ampmeter needs to be identified by the year, as there are (AFAIK) 2 different types.

Thanks for that american psycho (interesting name).

I assume that is the alternator side of the plug looking at the terminals?

the image is looking at the alternator.

i do not know about wiring beyond this, a FSM wiring diagram from a 60-series would be helpful.

i'd guess your 40 series ammeter would work on the same principles as the warning light - feed from alternator and battery + each to a terminal. a difference in voltage causes the needle to deflect.

but it's just a guess and there's plenty of info on wiring this up here if you get the search to be nice to you.

Righto, didnt really get any specific direction with this so had to just dig in and see how I went.

I have read various reports on HAVING to have the charge light wired - some seem to say its integral and others dont. So I have left it out for now.

B+ straight to the battery.

Large White/Blue (white on alternator) - to the existing wiring harness which tracks back to the ammeter gauge and then + on the battery
Larger Yellow/Blue wire (blue on alternator) - ignition switched power
Smaller Yellow wire (red on alternator) - I figured this was the charge light and have so far omitted this connection.

To make the ignition switched wire at the plug for the external regulator I connected the Black/Yellow to the White/Green wire - seemed that the white/green ran straight to the alternator only. This worked fine until I tried to turn the engine off and the EDIC would not switch off. Disconnect this 'bridge' and the EDIC then worked fine - so there must be a wire somewhere connected to the EDIC/FCR that I did not budget on - either the blk/yel or the white/green - not sure yet.

I will get around this by just running an ignition switched power straight from the fuse block to the alternator. Hopefully that fixes the problem.

I tested while running and it seems to be working. I have around 13.5v across the battery terminals. It did seem to fluctuate with revs - not sure how much is normal but the battery is low so I was going to leave this a bit to charge it up and see how it settles down.

Anyone see any problems with the way I have wired this up?
1975 FJ45 Ute Chassis, 1988 2H with 5-speed, Thomas PTO winch, 2" OME Suspension, Front and Rear ARB Air Lockers, Full rust removal and respray.
You must log in or register to reply here.