I am trying to add AC to my '84 FJ60 that came from the factory without AC. It is proving to be a PITA.

I have two other 60's that are both '87s and have been using them as a guide. I purchased a full set of used hoses from Cruiseryard and a condensor from Rock Auto, but have now figured out that the condensor piping changed between "84 and '87. The hose set I received appears to be for the earlier configuration since the compressor to condensor line does not have the large bent hard line on it that was used on later models. However the condensor I got is for the the later model. and requires that hose. Now I am having trouble finding the earlier model condensor (Denso 477-0155) in stock anywhere.

If anyone has a stock '84 with AC intact I would love to get some pics of the hoses and hard lines in and out of the condensor. Also any thoughts on where I can find the parts I need to go one route or the other, preferably the configuration that was used for the '84. Thanks

The lack of replies had led me to realize I am probably overthinking this, LOL. I am just going to use the hoses I have and send them off to Cold Hose to be rebuilt and lengthened (in the case of the line from the compressor to the condensor) as necessary.

Thanks! I'd certainly be interested. My plan was to pirate off of an '87 ranch truck I have that I don't need the AC on (it hasn't worked for a long time anyway). But I would rather not have to disassemble the in dash stuff.

I have collected some things already:

Dash control panel with A/C power button
New evaporator
New condensor (I got the one that was used after '85 before realizing there were two styles)
Used hoses (as detailed in my first post, the compressor to condensor hose is the earlier version and wrong due to condensor style change)
Rebuilt Denso compressor
Compressor mounting bracket/tensioner
New AC belt
New dryer
Dryer mounting bracket
New expansion valve

Also probably still need things I have not figured out yet.

I would probably be interested in most of what you have though, just to have spares. Please shoot me a PM when you have time.

So I just saw this tonight. I am having issues also. 2nd summer in a row I have been trying to replace it all on my 84. I got all the parts, new hoses made using old as templates, then went to install and immediately found I bought the newer style denso condenser 477-0154 for 86 and later. So in March I back ordered the correct on on Summit and then last week got a refund notice order cancelled part is No Longer Available. Ugghhhh. So now I think I am in a similar situation as you? I need another new different hose for the condenser to compressor. Is there anything else needed to use the 477-0154 in an 84 model year?
Frustrating.

Anything I can help with as far as the 84 setup and hoses?
The Evaporator was still available new last summer.
1984 FJ60 Bluebird The project.........

Thanks for the reply. It looks to me like the later model condensor will work with all of the hoses except the compressor to condensor hose. I have some feelers out to source a used hose to have rebuilt. I believe the fitting on the condensor side is the same so I suppose you could also forget about the U shaped hard line and just have the old hose remade in a longer version, or with a different fitting that would maybe match the upward angle of the condensor side better. I have attached a picture from the Mosely Motors website of the later model hose with the U shaped hard line. 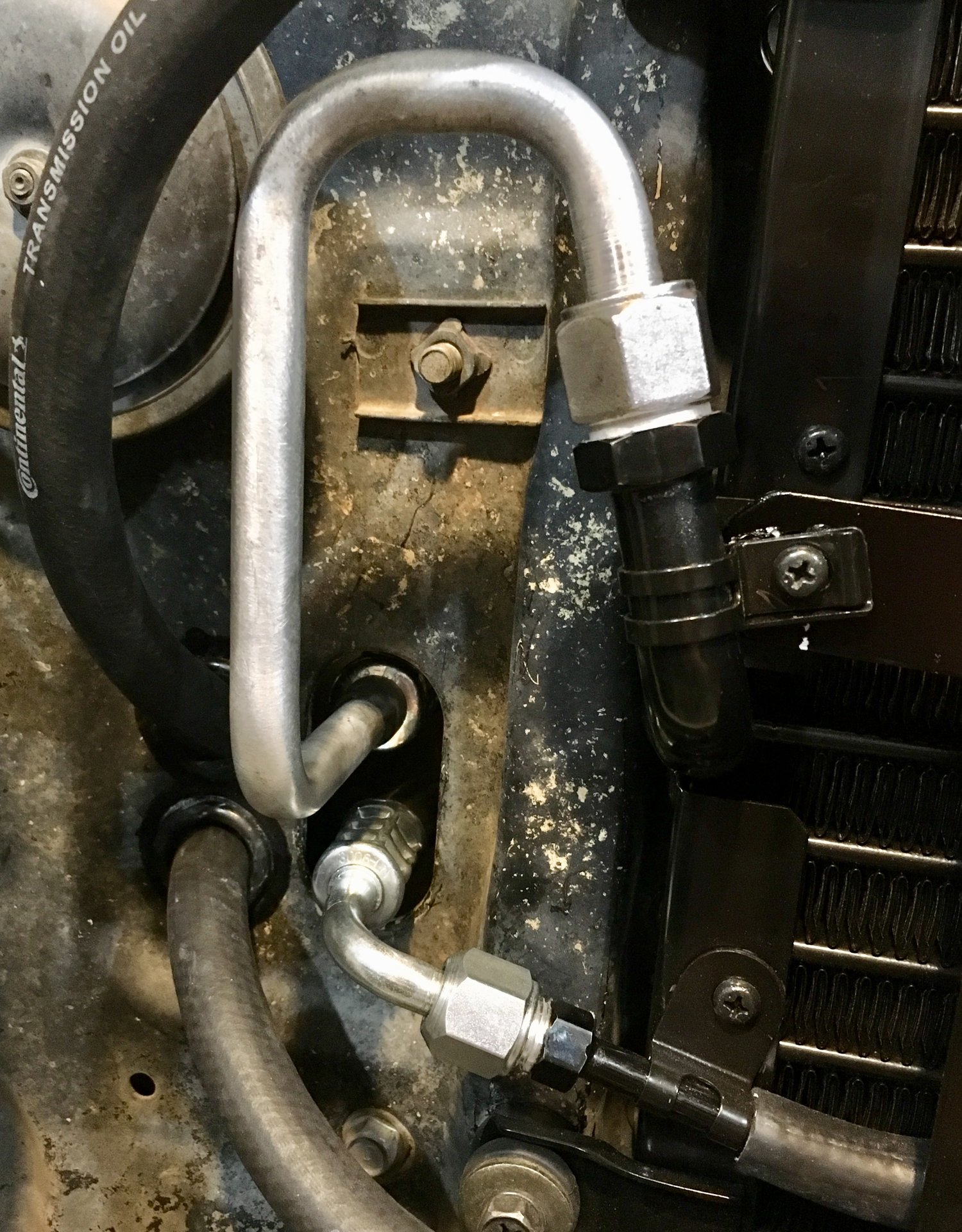 Awesome, THANK YOU! I wonder if that U-shape hard line is hard to source, but like you said a longer hose with the right fitting might work? On Coldhose.com there is the option to add a middle fitting in the hose. I will try to get things installed so I can figure out the hose maybe this weekend. I'll let you know what I come up with.
Thanks
1984 FJ60 Bluebird The project.........
N

Same here. The Denso condenser for pre 05/85 FJ60s is discontinued. I also had an order for one through summit. I asked them to check last week and they said they reached out to Denso and its not gonna happen.

Cruiserparts.net says they make their own pre 05/85 condensers but they haven't answered the phone, returned my vm or email for about a week now. I wanted to confirm they actually have them before I just order.

I'm also thinking of getting the later FJ60 condenser and making the fittings work, unfortunately I already had my hoses rebuilt for the old style.
Last edited: Jun 16, 2022

@Nachobox I have all new hoses also. But I think if it works out I will only need to get one remade to fit the newer style condenser.
1984 FJ60 Bluebird The project.........

Update: I found a later model used hose at Cruiseryard and I am going to try and go that route, using the later model condensor.

Good news! This has probably been answered elsewhere, but is the later 60 hose pictured above NLA also? I assume it is but never checked.
I may have to give Cruiseryard a call. Do you plan on having one made to match it or run it as is?
Thanks
1984 FJ60 Bluebird The project.........

Does anyone know if these will work on the newer condenser but pre-1986 model 60?
What is the difference on the two?

Once I get the used hose from Cruiseryard I am going to send all 4 hoses off to Cold Hose be rebuilt with R134a hose. Where new matching fittings are available, I will ask them to use new fittings. Some of the fittings are apparently either not available or are very hard to find, and need to be re-used. I have never been clear on which ones. Plus they will need to incorporate the long U shaped hard line into the hose we have been talking about. I figured the best approach would be to send a full set of hoses and let them do what they can.

I will try to remember to folllow up with more info on which fittings they replace and which they re-use.

So cruiserparts emailed me back and said they have the pre-85 style condensers in stock. $214. As I already have the hoses I went ahead and ordered.