I have a new-to-me issue that is becoming more frequent. The wipers on my 1974 FJ40 don't like to stop when I push in the wiper switch. The switch in the dash is a new OEM switch and the ground appears good, so I'm assuming the issue isn't there. All other functions work well. Park, Lo, Hi, and Wash. Just not stop. The issue just recently cropped up and went from intermittent to frequent. At first I thought it was lack of use and a touch of corrosion. I carefully removed the "unobtainium" Park Switch cover (first image below). Everything looked ok to me. I carefully cleaned the contact points with a bit of sandpaper, but that seems to have no effect.

The only additional clue I have, is that if I cut power (i.e. ignition key to off) with the wipers in the park position - they park. And if the wipers do, by chance, stop when I push in the dash switch - they park. I'm thinking this is a ground issue somewhere and perhaps the Park Switch is the wrong place to be. I have a “stop” issue, not a “park” issue now that I think about it.

The second and third photos below are the wipers in the parked position. The final photo is the same switch with the wipers sweeping in the down position.

I've searched here and couldn't find anyone with the same issue. I've also read @Coolerman excellent "Wiper Science" post. Any ideas what else to look for before I have to remove the system and take it to the work bench. Hate to do that if its something simple (or nothing to do with the wiper motor) since the system is otherwise working well and adjusted. 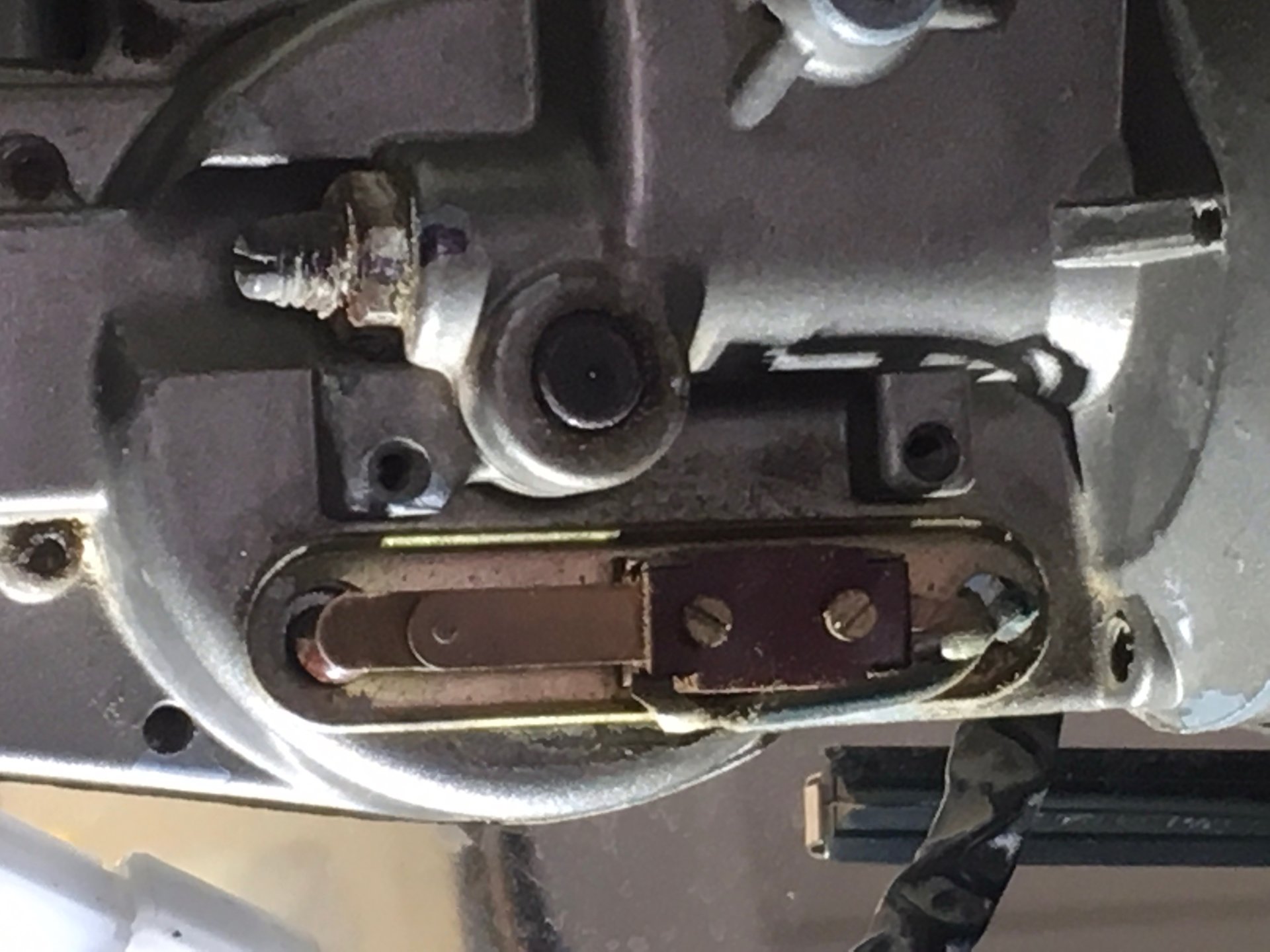 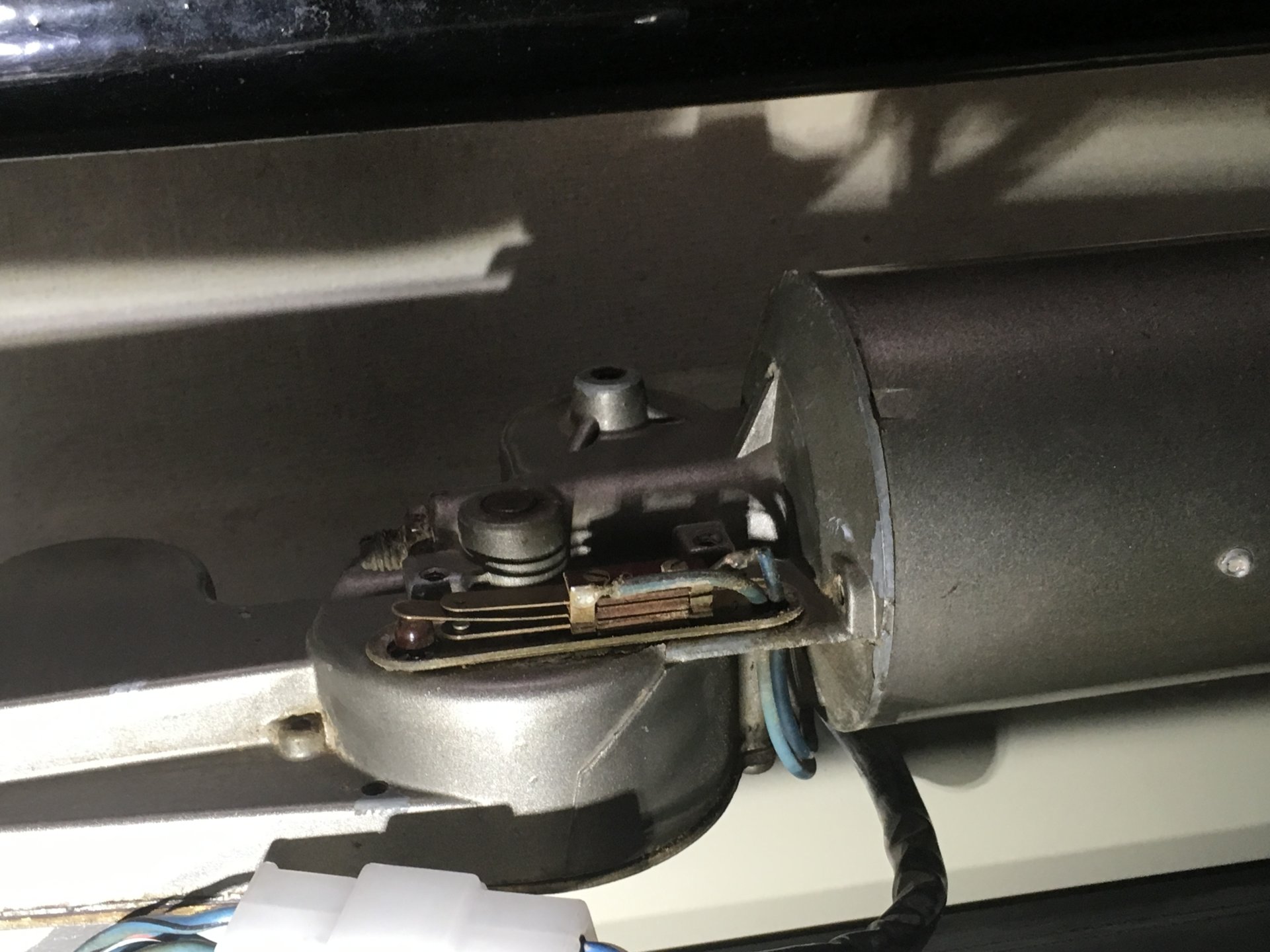 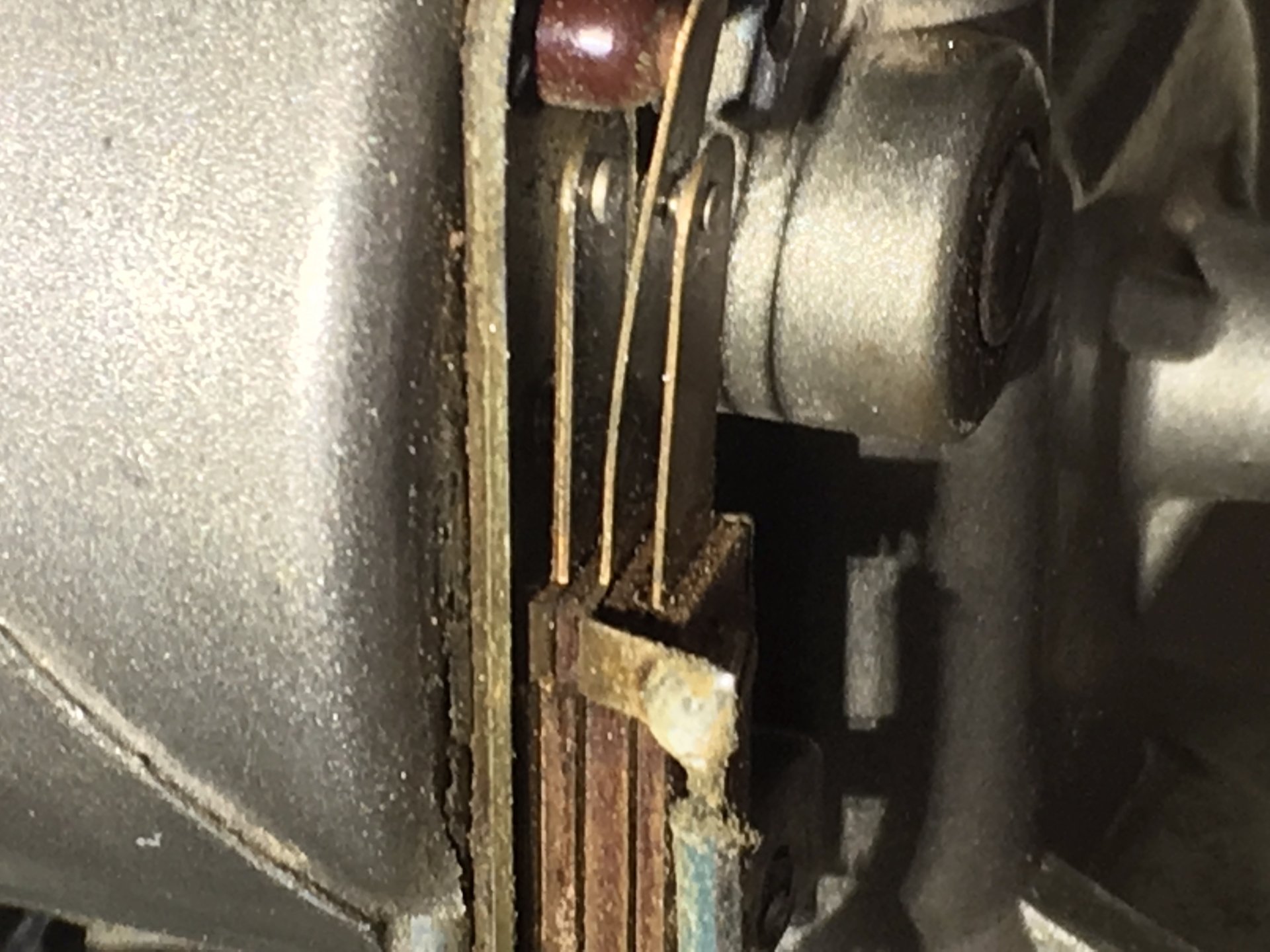 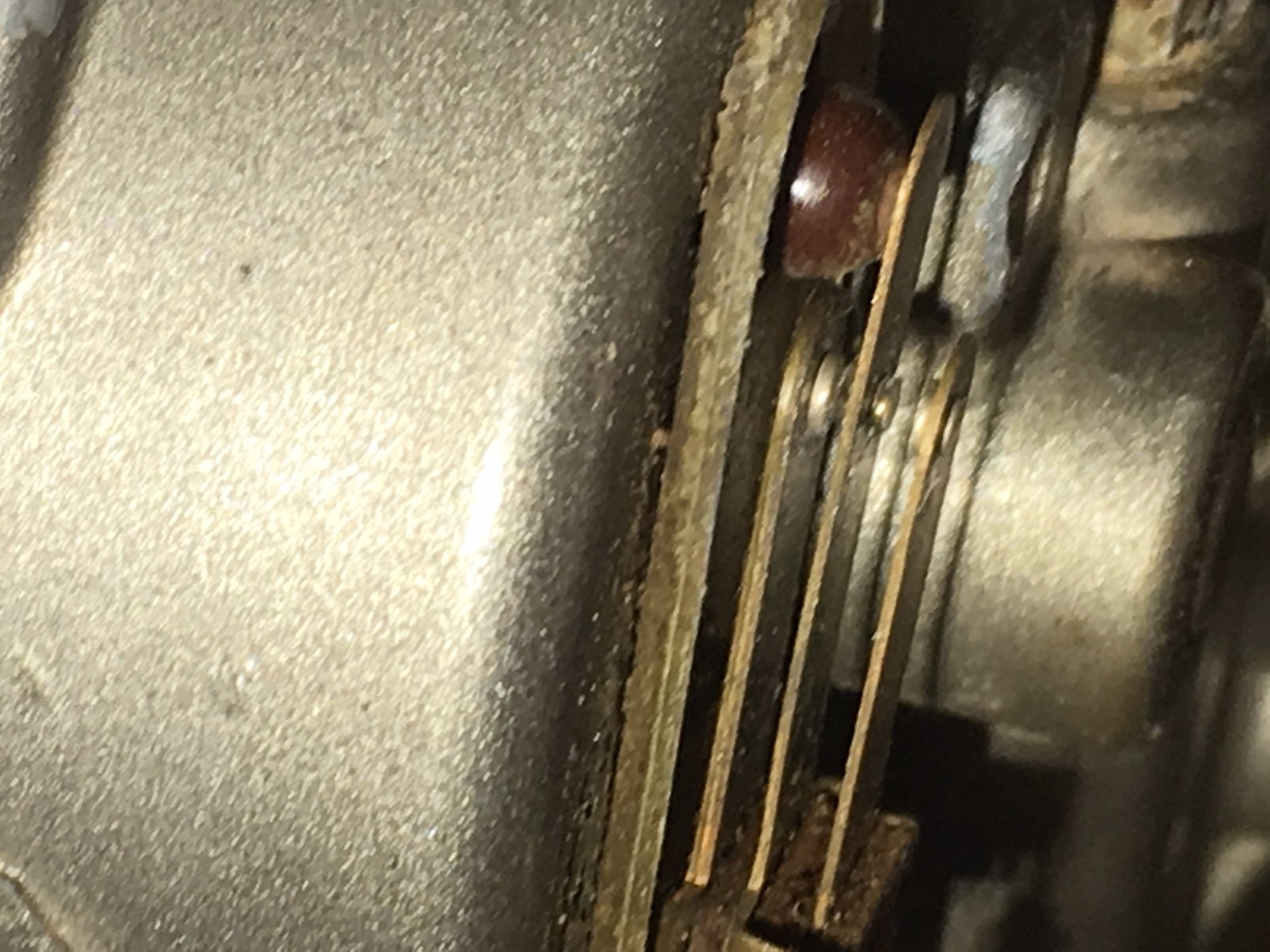 I’d be looking at the dash switch, sounds like the circuit is not opening when to push the switch in.

Pull it out and ring out the contacts with a meter.

The switch is only a few months old. I’m going to dig around and see if I kept the old one.

I have the almost same problem. If I turn it off during the first minute, it will go off and park. After running for awhile it will not turn off
When o turn off the ignition for a few minutes with wiper switch off, then turn on ignition the wipers will park. I have had the dash switch out and apart twice with no resolution. I am thinking maybe ground problem too, but haven't taken the time to chase it down yet. As the OP I welcome all suggestions

Are you positive the plugs are together the right way on the switch?

That one can plug in backwards if I remember correctly.

My wipers were working fine. This is an intermittent issue that is becoming more regular. If it was an incorrect wire routing problem, I’d think it’d be a constant issue. I do know Coolerman (I think) helped figure out the wire color coding issue where the motor meets the the main harness. I have that sorted.

I tried my old switch. Same issue, so it’s not the switch itself. But swapping back to the new switch again and activating the wiper repeatedly, has (temporarily) masked the issue. I’m sure it’ll rear it’s head again...

Not sure but from many years ago I remember having to unplug mine to shut them off. I think it’s a Toyota wiper motor gremlin. Now they only come on if it’s raining lol. Think that’s why they obsoleted the top mount wiper motor.


Look around at the portion where the windshield hinges forward, very likely you have a wire grounding out allowing the motor to run.

rkymtnflyfisher said:
Doesn't power go to the wiper motor and then to the switch? If so I'd take a hard look in the section of wire from the wiper motor through the windshield frame.


Look around at the portion where the windshield hinges forward, very likely you have a wire grounding out allowing the motor to run.
Click to expand...


yes... solid blue wire is constant 12v, the other 3 are grounded through the switch to complete the various circuits...
B

Interesting thread. I can’t wait to see what is found

Check the park switch contact that makes in the park position. If it isn't making good contact you will not get good current flow to the motor to cause it to brake and it will roll right through park and keep going. Also verify you have +12V to the park switch blue wire (outer reed) and the blue/white wire at the motor with the wiper switch in off. 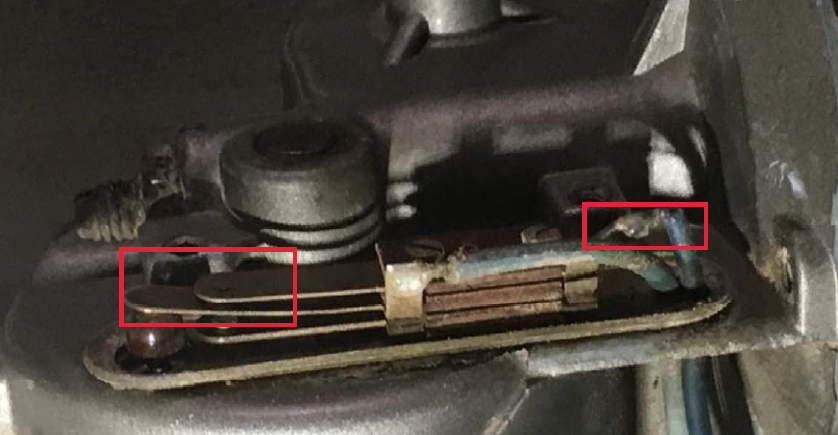 I’ll go out and check. It’s definitely back. I’ve cleaned those contacts on the left and they look good, but I’ll hit them with my meter and check the wire on the right.

I think the wire boxed on the right is it. It appears as though it broke from its solder connection and was just resting against the metal tab. The other wire solder also broke when I lightly touched it. When I hold them both in their proper position, the wiper seemed to shutoff fine. I’ll reattach these and see if that completely eliminates the problem. Thanks @73tlcv8 .

Anyone have any tips on soldering these? Should I unscrew and remove the insulators between the metal contacts? I’m not sure if they are holding something on the backside I cannot see.
Last edited: Apr 16, 2019

Thanks Hobbes for posting problem and 73tlsv8 for the probable solution. My wire on the left is disconnected too and seems to work if held in position. Also thanks to the Mud intellect pool that helps so many of us.

Wire on the right. Sorry, thought I typed right

I unscrewed the wires and I unstacked the contacts. Re-soldered and I appear to be fully functional. Thanks to all that helped.

(I’ll add those connections are not designed well. If the solder breaks again, I might find a crimp wire connector that slides over the tab.).
You must log in or register to reply here.

Squeaking when coming to a stop or taking off.