Got my 60 back from the shop was dripping coolant. The engine was getting checked over after an over heat (my fault)
replaced hoses and flushed the living crap out of it. (needs it again).

I Just assumed it was a loose hose clamp that was leaking under pressure
was dripping coolant, a drop every second or two.
and took me a few days to get back. rad was over 2 gallons down. 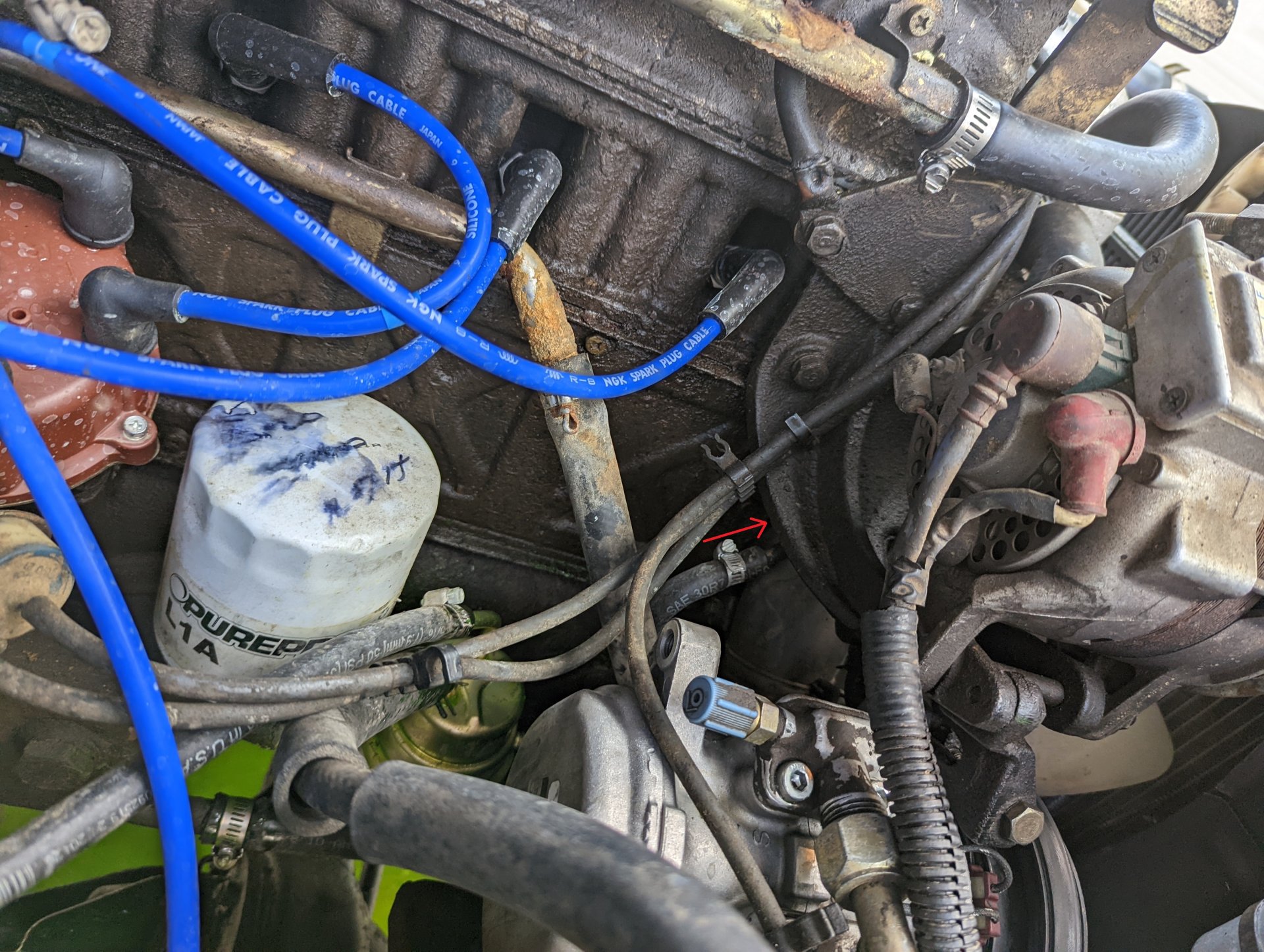 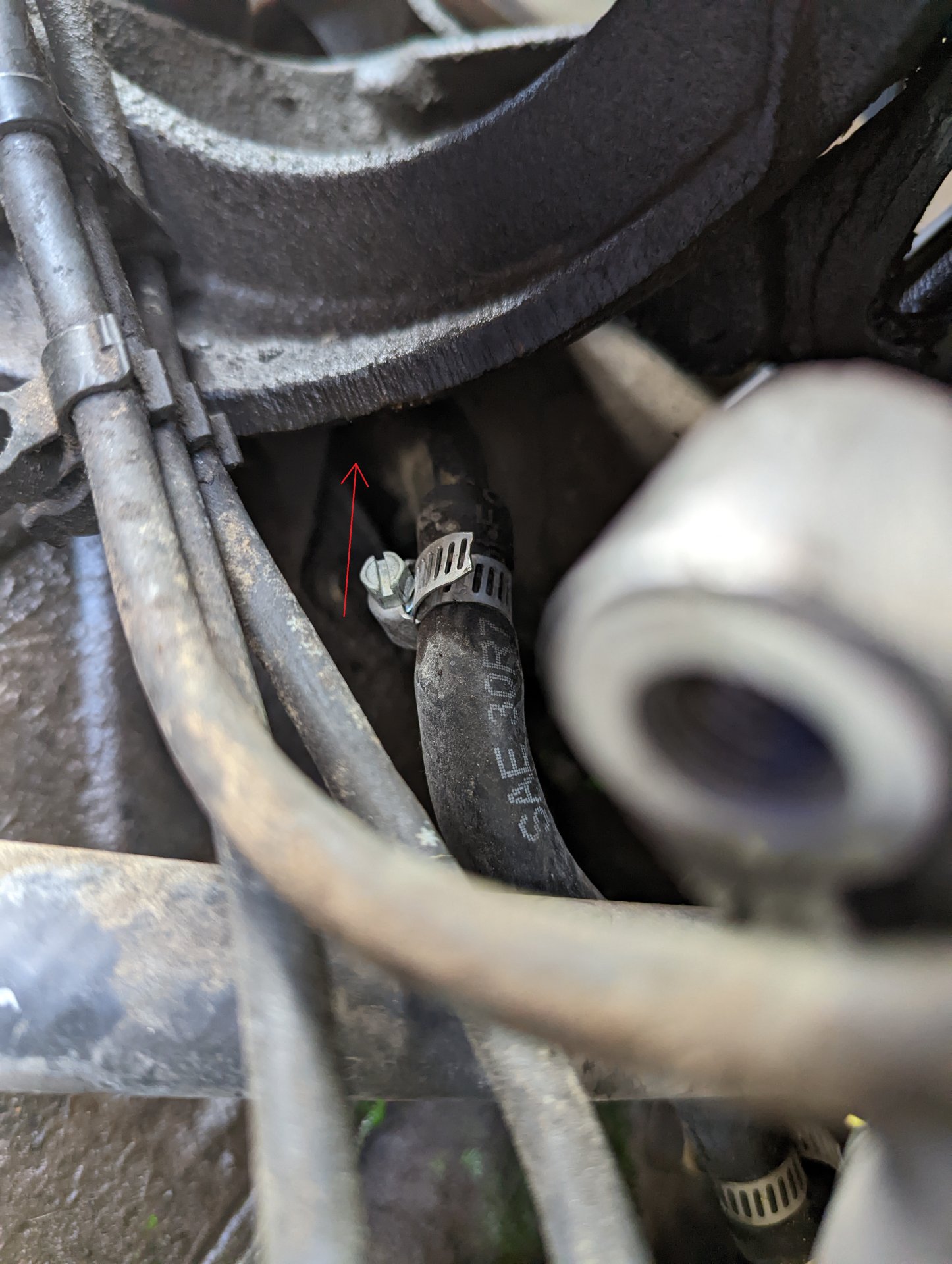 last pic is jamming the phone in trying to see where it was coming from. 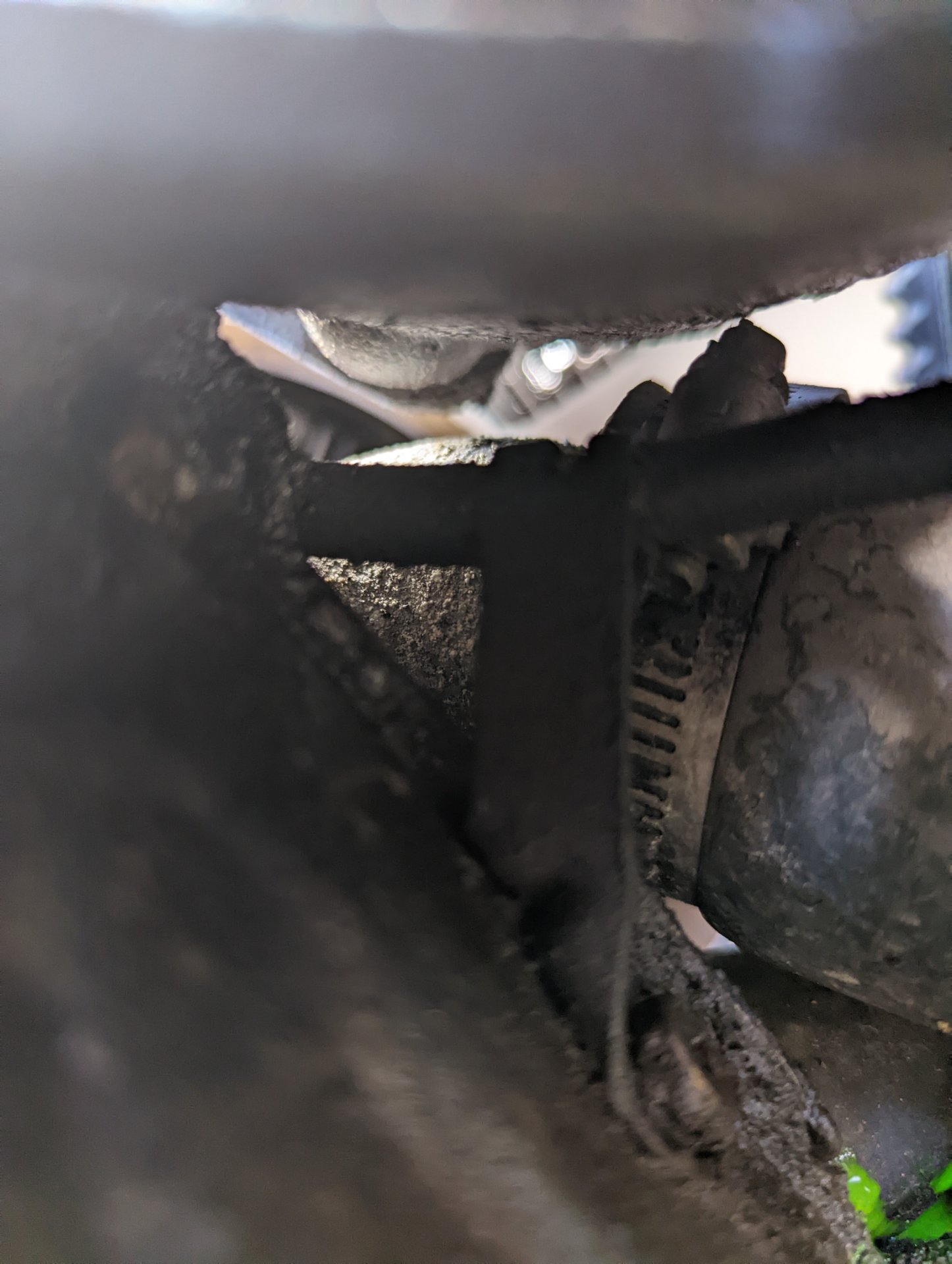 I just cant' see what's going on back in there very well.

Those hose(s) aint loyal. I think a coolant system overhaul would do this truck good.

Could be the waterpump? 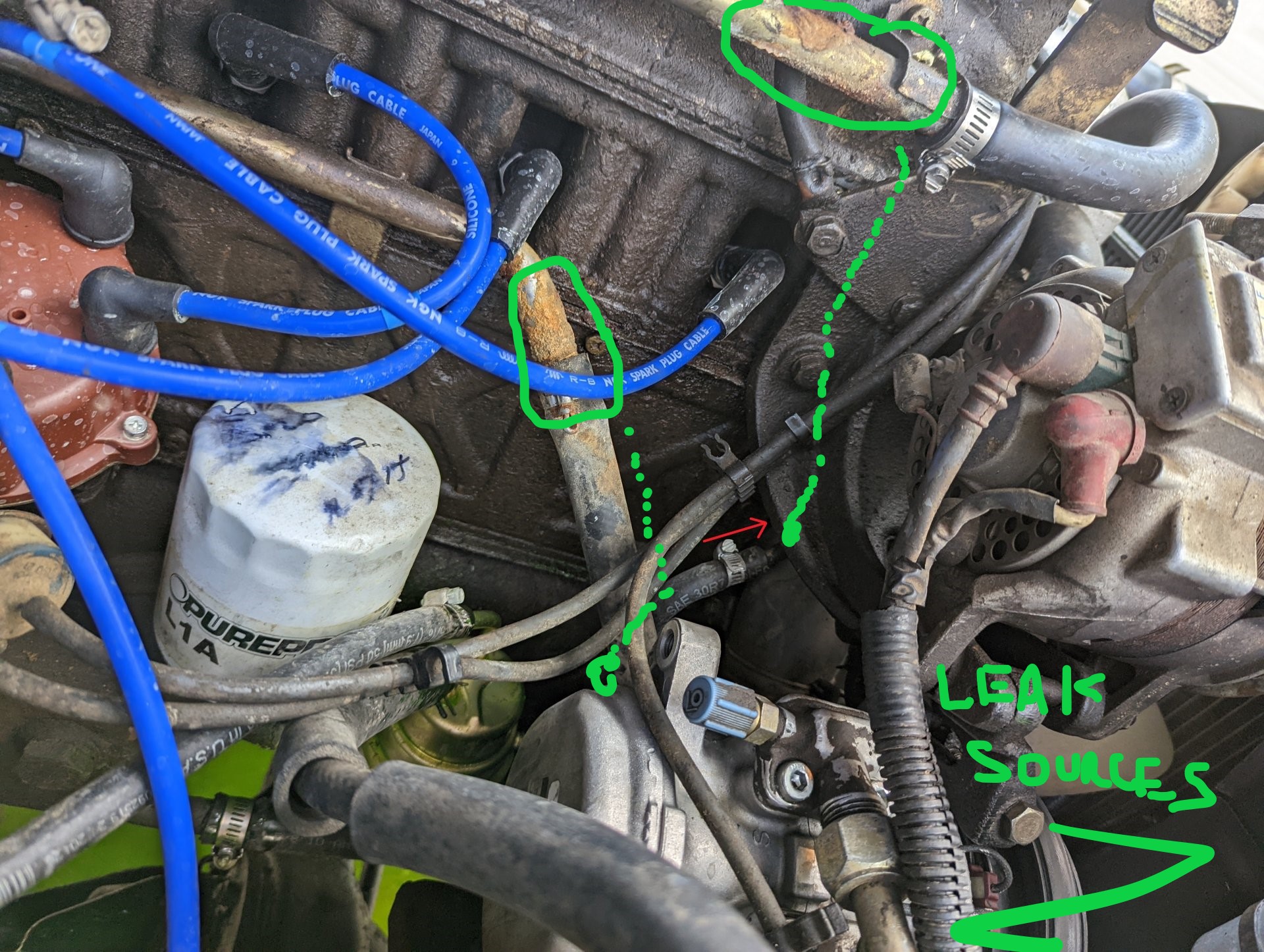 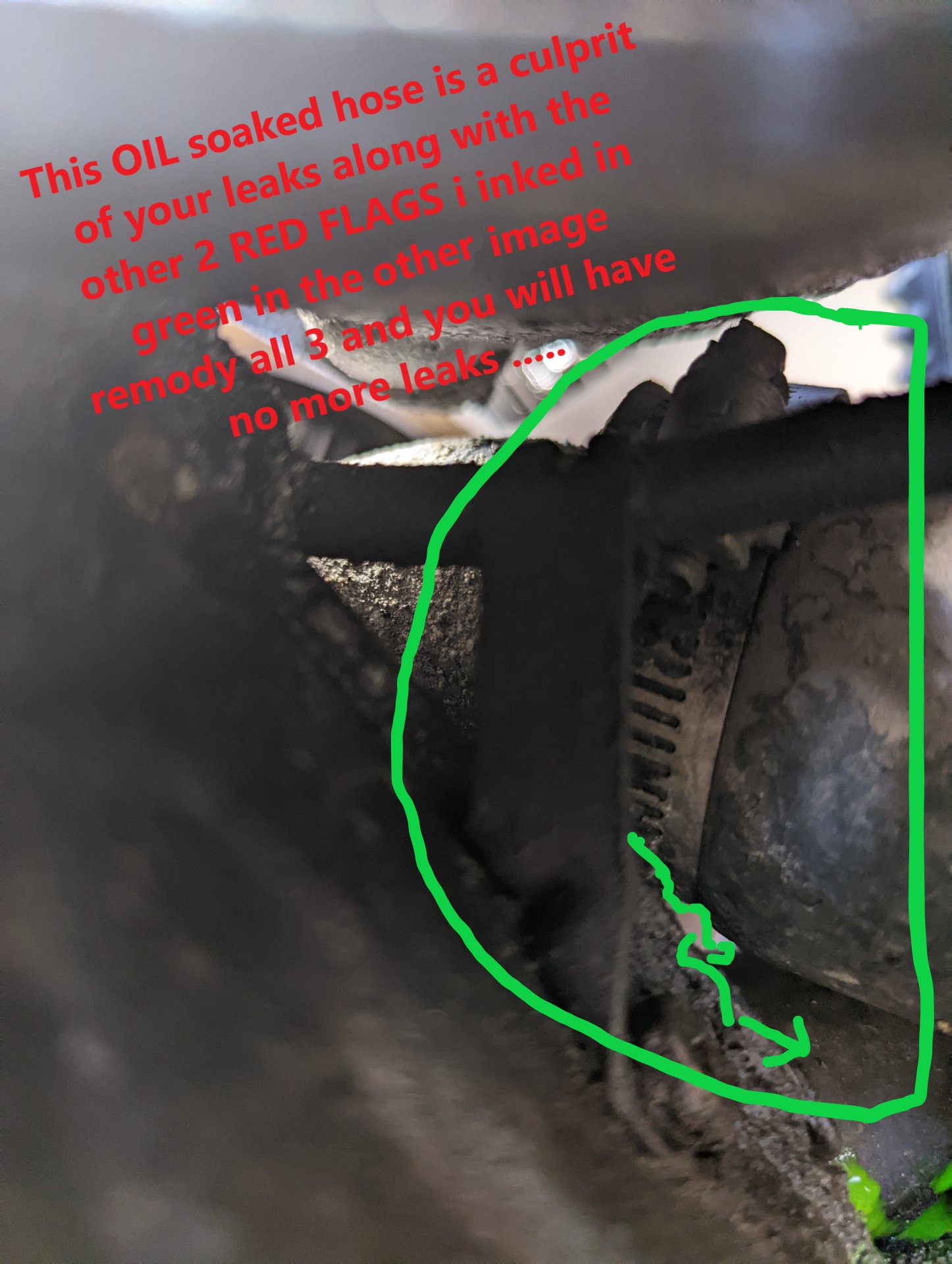 I just cant' see what's going on back in there very well.
Click to expand...

ChaserFJ60 said:
I think a coolant system overhaul would do this truck good.
Click to expand...

The good news for you is that you can see a stream of coolant so detecting your problem should be fairly easy. You cannot see anything because you are looking top down and as you mention the alternator bracket is in the way. Either remove that to reveal the hose collection right there or, (more easily), get under the truck and look up. As @ChaserFJ60 mentions you should prolly start gathering funds together for a cooling system overhaul. Looks like many hoses and hardlines on your truck are original. Your current leak is a cry for help. Having a sub par cooling system is rolling the dice. You don't want to crack that precious 2F head because your cooling system cannot keep up due to leaks, especially in this searing Texas heat. Your cruiser will thank you.

You can also think about going to your local auto parts store and renting a cooling system pressure tester. Connect it to your radiator and (with the engine off) pressurize the system to 13PSI. Because of the extreme nature of your current leak, it may not pressurize fully or at all, but if you can get some pressure using it should allow you to move around the truck without fear of moving engine parts to see right where the leak is coming from. That said, since its a stream of coolant coming out, it should be pretty easy to spot if getting under the truck to look without even needing to pressurize the system.

Some cooling system diagrams to maybe get you started. HTH: 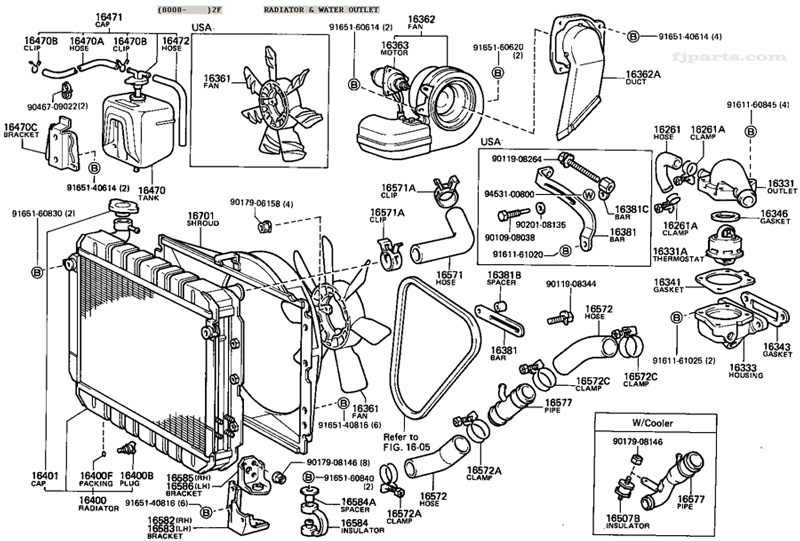 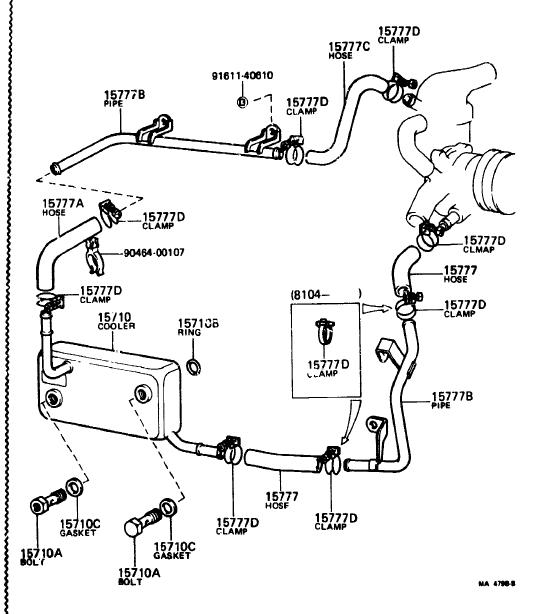 I went back out last night in the low light and used my Rockhounding long wave uv flashlight and a stool and was able to find it.

it's the water pump gasket leaking, exactly where the red arrow is pointed.
.
it comes out like a normal water leak and somehow turns all smooth like a missing hose, instead of breaking up into a fine spray.
I'm guessing it was blocked by crud and all the flushes finally knocked the crud loose.a

caladin said:
it comes out like a normal water leak and somehow turns all smooth like a missing hose, instead of breaking up into a fine spray.
I'm guessing it was blocked by crud and all the flushes finally knocked the crud loose.
Click to expand...


Again, a cry for help. Its telling you something. Time for a water pump replacement. Doubtful it knocked anything loose. Its just old. To replace that pump you will have access to lots of those old hoses. Replace that stuff now when you do the pump. Consider the timing cover gasket, crank seal, any rusty hardlines, that pesky little short oil cooler hose. All that stuff is ripe for replacement on your truck and its easier to do with the cooling system parts out of the way. Maybe even have the radiator hot tanked and cleaned, checked for leaks. Its kinda a lot of work, adds significantly to the cost, and a general PITA but you will feel better knowing all thats been addressed and your Cruiser will thank you. First bit of maintenance I did on mine when I got it. Really part of a basic baseline. Even a fan clutch replacement might be a good idea while you have this stuff off here. Rockauto has a decent price on Aisin pumps I think. Its the one you get from Toyota just without the Toyota badge, box and price.

Might save you a few bucks there. You might look around for some Toyota OEM versions just to see if that saves you any money or not these days. When I did mine it did, but maybe things have changed. If doing the TC seal, you will need a few specialty tools Like a 46MM Socket for the crank nut, some kind of puller setup to get the crank pulley/HB off the crank, and a torque wrench that goes over 100FtLbs to get the crank nut torqued again. I had to buy that stuff so it added to the total cost of doing this. Factor that into if you want to do this yourself or have a shop do it. You can prolly get away with just the WP but based on your photos, I wouldn't. GL and HTH.

Edit: Oh and spring for the Toyota WP gasket. The Aisin pump has two gaskets, one for the body of the pump which is installed when you get it, and one for the pump to engine block. Definitely spring for the Toyota pump to body gasket, but you may also consider a pump body gasket from them as well. Some indications on other forums that the pump body gasket that ships with the pump might not be that good. I installed mine with the shipped gasket and its been fine but have seen other folks have issues with the gasket thats installed from the factory.
Last edited: Jul 29, 2022
1984 Toyota Land Cruiser FJ60 "The Hell Bitch"
1946 Bantam T3-C My Bantam T3-C Trailer Build
TLCA #27852

Thanks, all the hoses should be replaced, I'll check it. Put in new rad. Thermostat, and big coolant hoses hoses several small ones already.

Trying to find the shorter hose that connects to the Smog pump (Smog to ABV?)