Since my purchase of a 100 series Land Cruiser in September I have acquired 5 Toyota Tundra Rock Warrior Rims (Toyota Part # PTR45-34120 & PTR45-34070), 4 locally from craigslist and one from the classifieds here on mud. I am now in the process of refurbishing these wheels to make them ready for install on my cruiser as I really like the style, weight, and durability of these wheels.

As many of you know, the cosmetic beadlock rings on the Rock warrior wheel can be quite difficult to remove due to the fact the dissimilar metals used (Aluminum rim and stainless steel machine screws) cause galvanic corrosion and can seize up making removal seem nearly impossible. My wheels date from 2010 and I do not think the rings had ever been removed. They were on there good!

The intention of this thread is to share my experience and educate everyone on the tools I used to successfully & unsuccessfully remove the beadlock ring screws and to prepare the wheel for re-installation of the reconditioned beadlock ring. Specifically, the following details will be discussed:


In this first post I'll hit on the T30 Torx bits I found that work amazingly well, in fact several orders of magnitude better than other well known brands.

I had a few T30 Torx bits in the garage and I of course proceeded with what I had. I wanted to see if these would break loose manually first so I attached an irwin impact rated bit to my handheld (old-school) impact driver, much like the one pictured here. The Irwin bit shattered on the second blow. The screw did not budge. Below is a picture of the Irwin T30 bit. No Bueno! 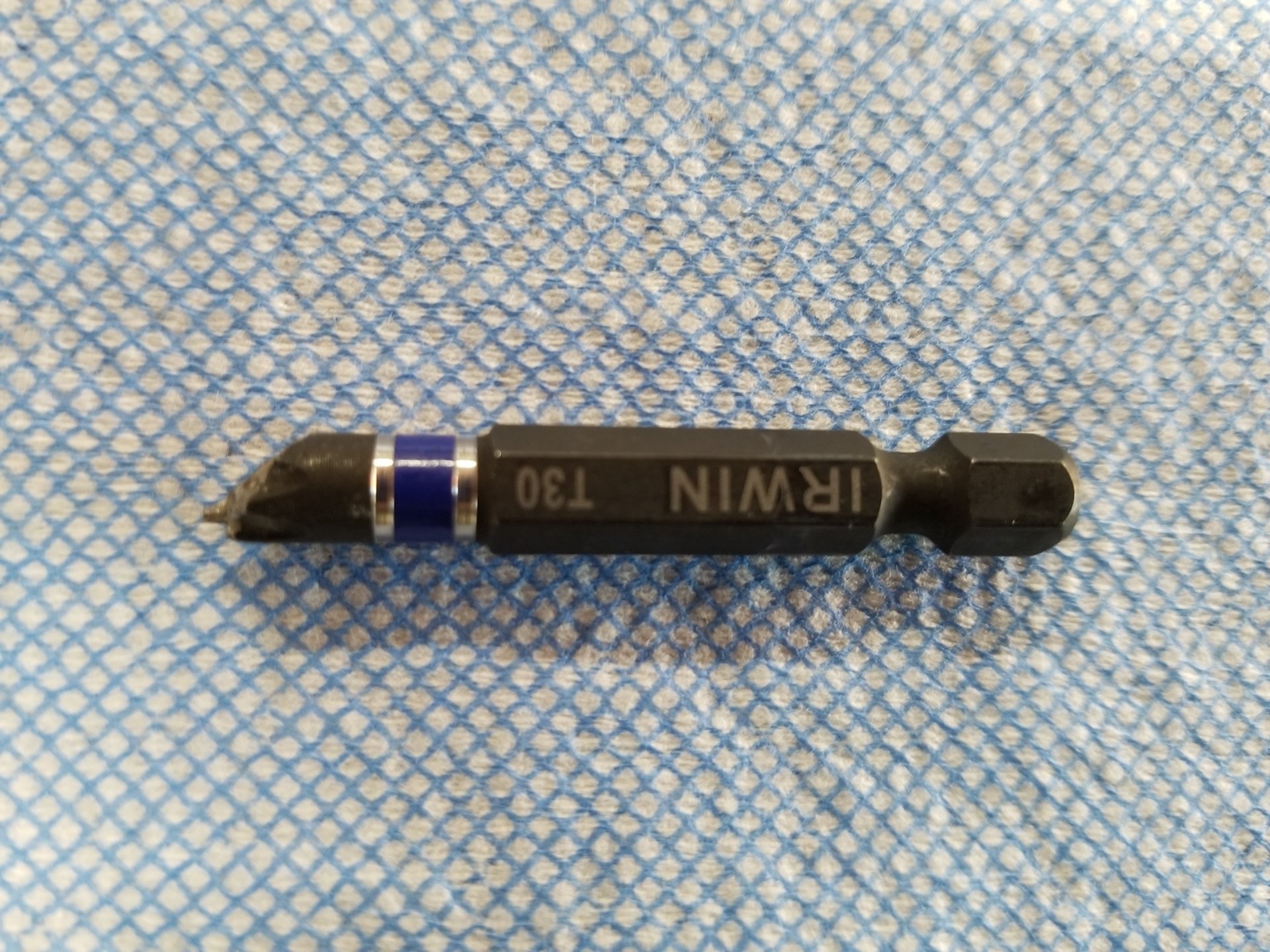 This same thing happened to the other T30 Irwin bit I had, albeit used with a Makita 18v Impact Driver, but I neglected to save it for photographing. It took less than 2 seconds for the bit to break (after heat had been applied).

I then snagged an old Lisle T30 1/4 drive socket I had and it did not fare well either breaking immediately when used with a hand impact driver. (See photo below)

I subsequently ordered several other brands of T30 bits on Amazon.

Fast forward a few days. I tried 4 brands of bits to extract the seized Screws (with Penetrating oil & judicious heat as not to damage the forged wheels).

First up were Milwaukee Shockwave impact rated T30 bits. They performed worse than the Irwin. They sheared immediately, both in the same spot in less than 1 second. 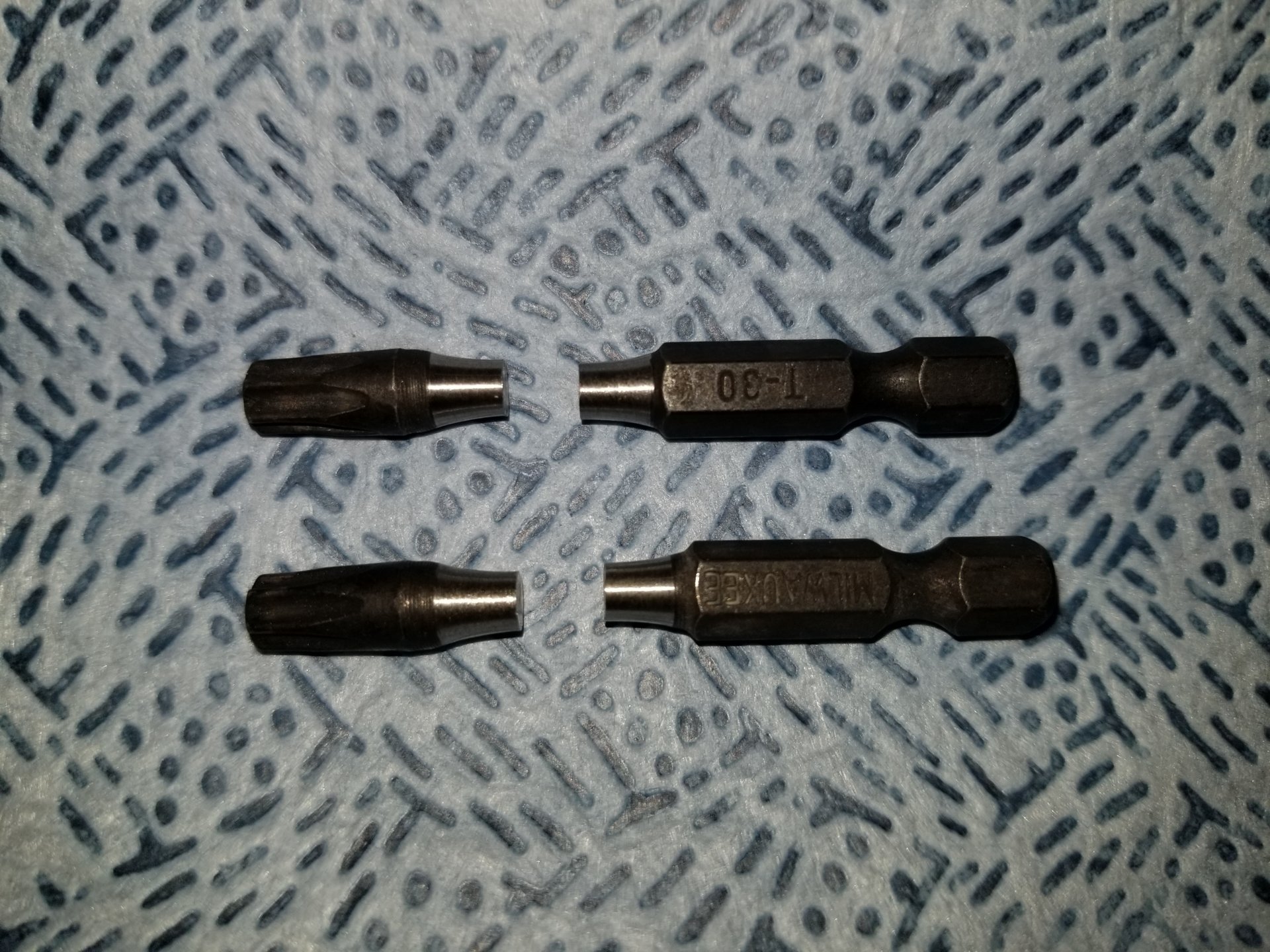 I next tried my only "socket" type bit which was a Grey Pneumatic 3/8 Drive T30 Torx Impact Socket 1130T. I thought the extra bulk would help and I was wrong. Failed to extract even one screw. My third bit was VEGA T30 TORX Impact Driver Bits by Impactech. These bits stood up much longer to the abuse of the impact driver, but eventually failed. I shelved the bits, but broke them back out when my fifth Rock Warrior spare was delivered. I was able to remove 5 screws from the spare wheel with these bits, but they could not remove the remaining 7 screws from the last/spare wheel.

The Last contestant and winner was the Wiha 76858 T30 x 49mm Torx Terminator Impact Power Bit. You can read my review on Amazon, but it does not reflect the Irwin bits nor the additional goes with the 5th RW wheel. This one bit removed a total of 55 Seized Stainless steel machine screws from 5 RW wheels. The picture below is the bit that actually did the work. 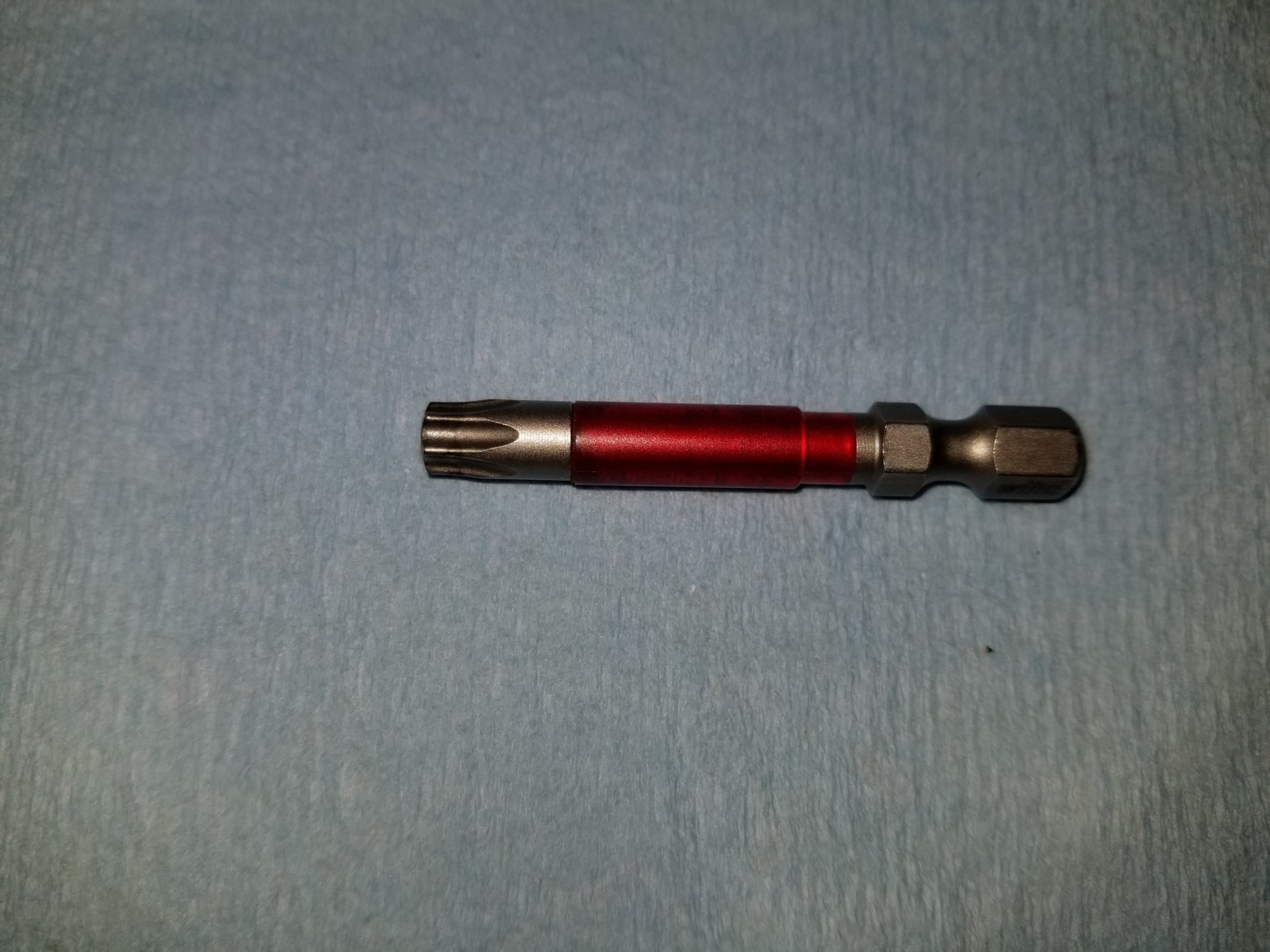 It was hard for me to believe this one bit repeatedly performed where other similarly "impact" rated bits failed so miserably.

This is a photograph of all the bits I tested in order (same as amazon review) save the Irwin bit which I had misplaced at the time (Lisle bit on far left). 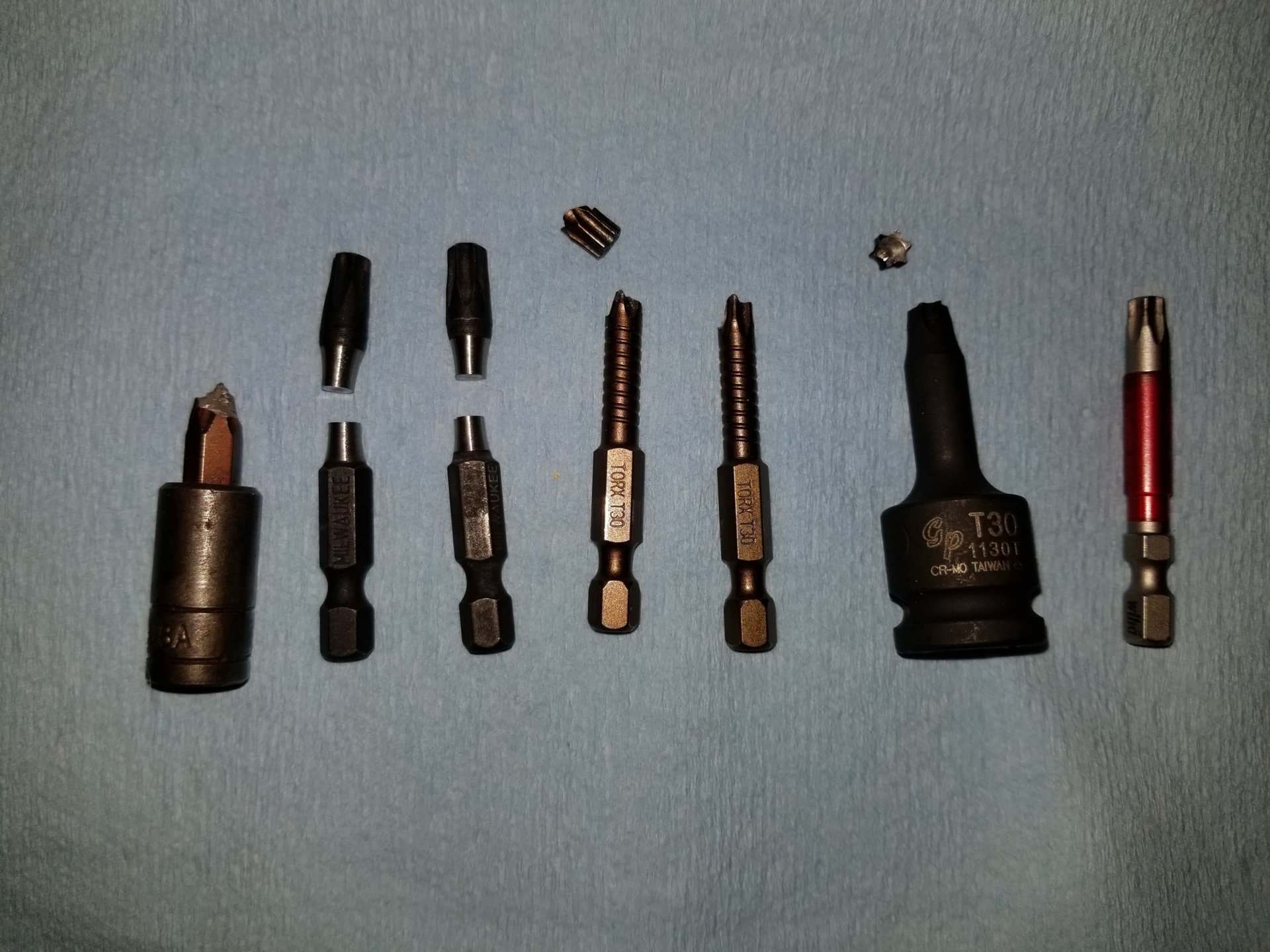 Needless to say I am impressed with Wiha.

I have since ordered sets of these bits for future use and recommend them to anyone who is intending to work on Rock Warrior rims.

Lastly, before I close out this initial post, I wanted to share a close up of one of the tapped holes after I had chased the threads with a bottom tap. You can see the pitting that reflects the galvanic corrosion that has taken place. 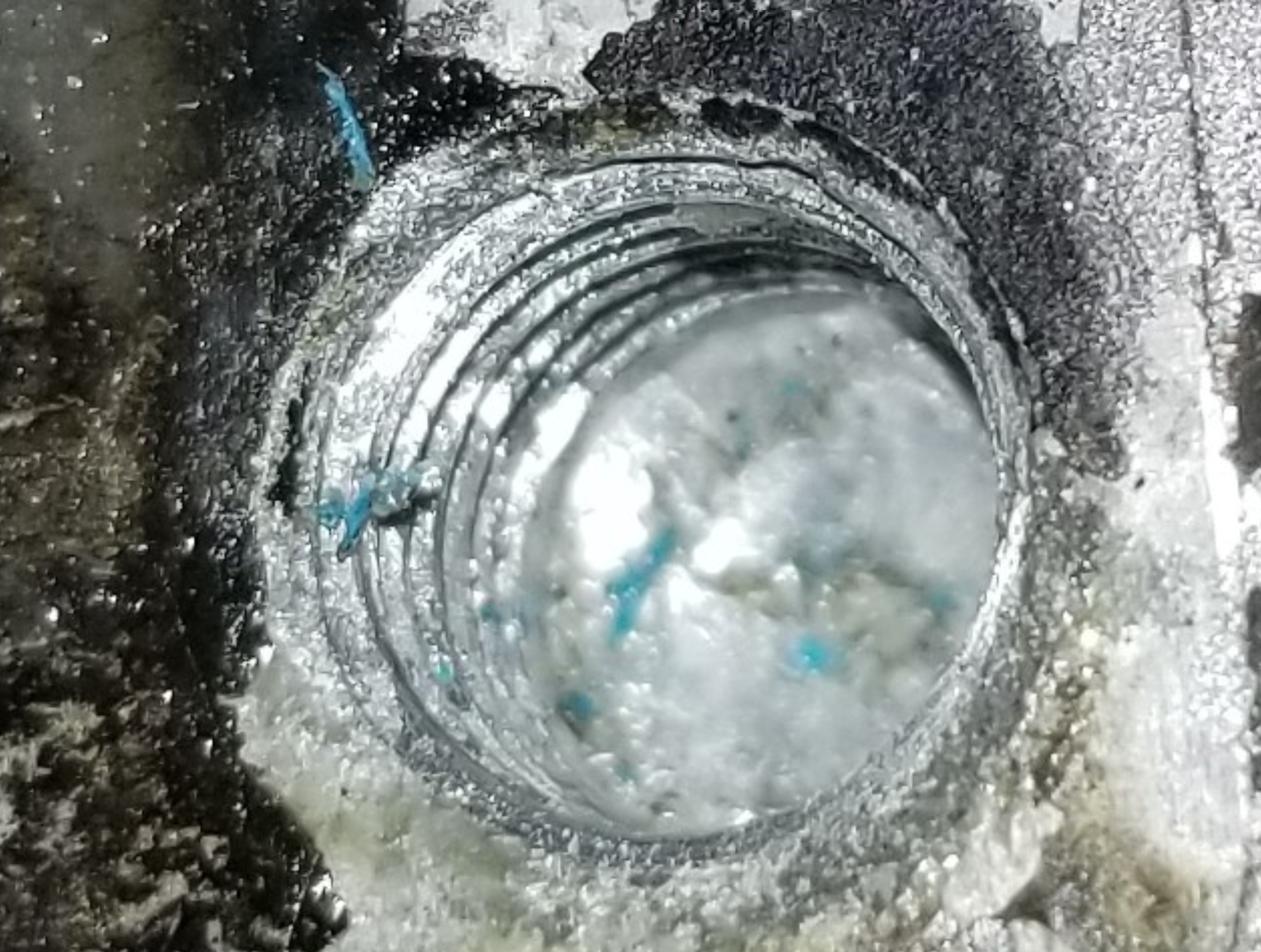 I can confirm on this topic that the Wiha Terminator bit is way better than a Milwaukee impact bits. I had the “50x” strength Milwaukee bit, but the end of it just twisted under the stress of trying to turn the bolt. I ordered the 29mm Wiha torx bit set from Amazon (it came with 2 T30). I was using a 1/4” socket wrench to turn the bit. This was the setup that was twisting the Milwaukee bits (tried twice) and with the Wiha I didn’t have enough leverage to turn the bolt or damage the bit. I got a bigger socket wrench and then the bolt broke free with no trouble.
Thanks for research @NutHatch!

Nuthatch - thank you for your post. I appreciate it... now that I received my first RW wheel (bought to use as spare), 100k mi Tundra with engine fire / wrecker in TX, off eBay. Sprayed on a little penetrant, waited a bit... used my cordless impact wrench (Christmas present a year ago from my lovely, thoughtful wife) and had zero problems with the wiha torx bit. Hopefully the set of four I'm picking up this coming weekend (local craigslist find, 2013 rig, wheels removed and stored at 40k mi) will go as smoothly. Really, thanks.

paddythesmith said:
Nuthatch - thank you for your post. I appreciate it... now that I received my first RW wheel (bought to use as spare), 100k mi Tundra with engine fire / wrecker in TX, off eBay. Sprayed on a little penetrant, waited a bit... used my cordless impact wrench (Christmas present a year ago from my lovely, thoughtful wife) and had zero problems with the wiha torx bit. Hopefully the set of four I'm picking up this coming weekend (local craigslist find, 2013 rig, wheels removed and stored at 40k mi) will go as smoothly. Really, thanks.
Click to expand...

Ossy said:
Did you remove them with an impact gun or an impact drill driver? I have a Milwaukee m12 3/8 and I've already broken a T30 bit. Is there a way to use the Wiha with my impact gun?
Click to expand...

The Wiha bits are the same as any other as far as fitting in a driver. If your 3/8” shank doesn’t accept standard (1/4” I think) bits, you’ll need something that does convert the 3/8 socket drive to the bit holder. If the Wiha bits don’t work, I wouldn’t waste a lot of time on it.

I worked on 3 of my 5 wheels before giving up. Went through every bit I had including 8 Wiha bits (they do work the best), only got 1 ring off with the other 2 wheels having 2-3 bolts I couldn’t remove. I took them to my shop and told them many people change tires without removing the rings and they agreed, I left telling them I wouldn’t bother trying, because they said they worked on that wheel before and always took the rings off. In fact there was a RW tundra getting tires that same day on a truck they had always serviced. When I came to pick up my wheels they said they went through every T30 in their shop as well and gave up.
2010 LX570 - Mercury Metallic / Cashmere
TRD 17” Forged Wheels w/ Toyo AT III LT285/75R17 (E)
TLC OEM Rack / Viair 400c OBA / SLEE Formed SliderSteps
You must log in or register to reply here.

O
4Runner on its side, rocks and dirt in the bead