RockCrawler.com Torchmate racing prepares for the 2012 King of the Hammers with a full schedule of ac (1 Viewer)

Over the next week off-road enthusiasts from around the globe will converge on the tiny desert hamlet of Johnson Valley California. The sparsely populated community swells to over 20,000 when the annual pilgrimage of off roaders descends on Means dry lakebed for the King of the Hammers event. More than just a race, the weeklong [...]Torchmate racing prepares for the 2012 King of the Hammers with a full schedule of activities is a post from: RockCrawler 4x4 and Offroad Magazine 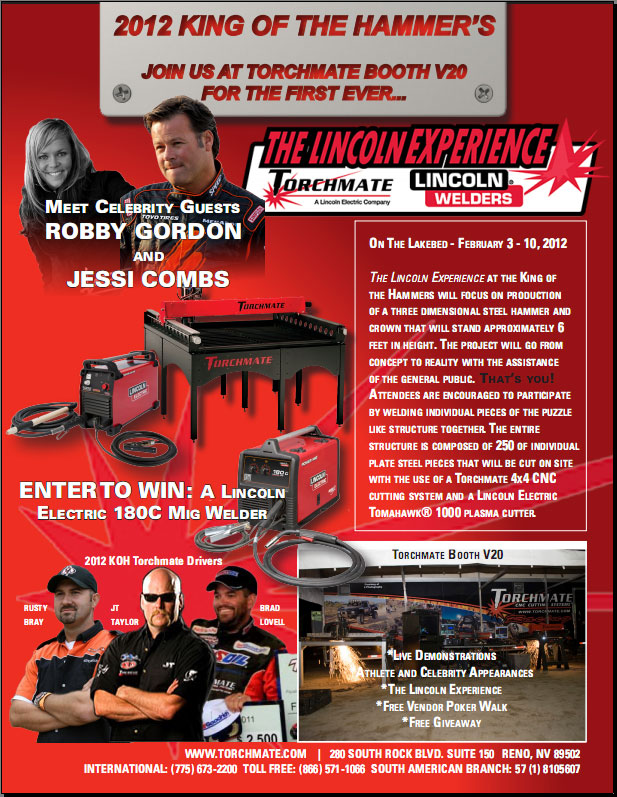 Over the next week off-road enthusiasts from around the globe will converge on the tiny desert hamlet of Johnson Valley California. The sparsely populated community swells to over 20,000 when the annual pilgrimage of off roaders descends on Means dry lakebed for the King of the Hammers event. More than just a race, the weeklong event offers a multitude of entertainment options for those who like to test the merit of their machines, and driving ability over some of the harshest terrain known to man.* The event epicenter springs from the dust to form a virtual city known as Hammertown.

Torchmate racing will continue is history of participation by once again setting up to assist racers and spectators alike who find themselves in need of repair. 2×2, and 4×4 Torchmate CNC Plasma tables will be available starting Monday February 6th in the Torchmate Booth V20 in vendor row. Lincoln Electric will also provide welder assistance. New for 2012 will be the introduction of the Lincoln Experience on Thursday February 9th. The Lincoln Experience is an interactive art project that will go from computer-generated concept to reality during the day. Attendees are encouraged to participate in the construction of the 6 foot tall steel structure which will encompasses 250 individual pieces of plate steel cut with a Torchmate CNC machine, and a Lincoln Tomahawk ® 1000 plasma cutter. *The structure will be auctioned off during the Friday main event with proceeds donated to the Off Road Business Association to protect the Johnson Valley OHV area 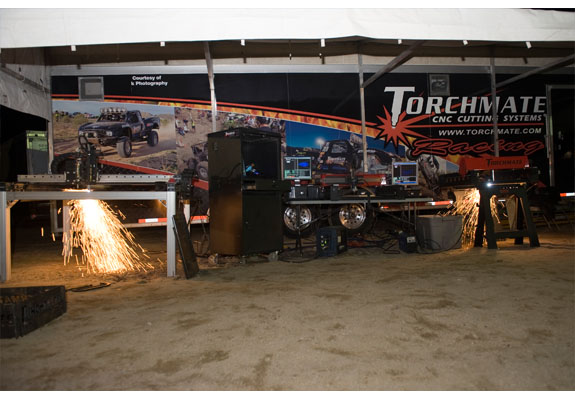 Motorsports Legend Robby Gordon and TV personality Jessi Combs who are both participating in their first King of the Hammers will be available in the Torchmate Booth for autographs on Thursday during the Lincoln Experience. In addition attendees can participate in a free vendor poker walk with a chance to win prizes including a Lincoln welding Helmet, and a Trail Gear winch. The Poker walk will run from 10-4 on Thursday as well.

If there was not enough reason to stop into the Torchmate booth, one lucky winner will be walking away from Hammertown with a Lincoln Electric Power Mig 180C welder. Just stop by the booth and sign up for your chance to win. For those who are looking to find out all the details on Torchmate CNC cutting systems, the event will offer you a chance to get one on one experience with the machines. Technical staff will be on hand to answer all your questions, and explore the multiple options available. Torchmate will be offering package sales deals on its Torchmate growth series with savings in excess of 10%.

Torchmate Racing to Field Three Top Drivers in the 2012 King of the Hammers.

Ultra4 racings JT Taylor hot off a win at the Ultra4 Stampede in Reno Nevada will pilot the Lucky 13 Torchmate Ultra4 to his 6th King of the Hammers start on February 10th followed closely by Former WEROCK and XRRA champion Brad Lovell, and Rausch Creek Qualifier champion Rusty Bray. The 2012 Ultra4 series gets under way in the California Desert February 3rd-10th 2012 with three of the top drivers in the series proudly under the Torchmate banner.

All 3 drivers will be featured in the Qualifier Happy hour broadcast live on the Ultra4 Network of websites. The Live happy hour broadcast will air starting at 4:00pm on Tuesday the 7th and Weds the 8th. *The Happy Hour *which is reserved for the best in Ultra4 racing will determine the starting position for the 6th running of KOH on Friday the 10th when over 100 drivers will start the brutal 165-mile course. 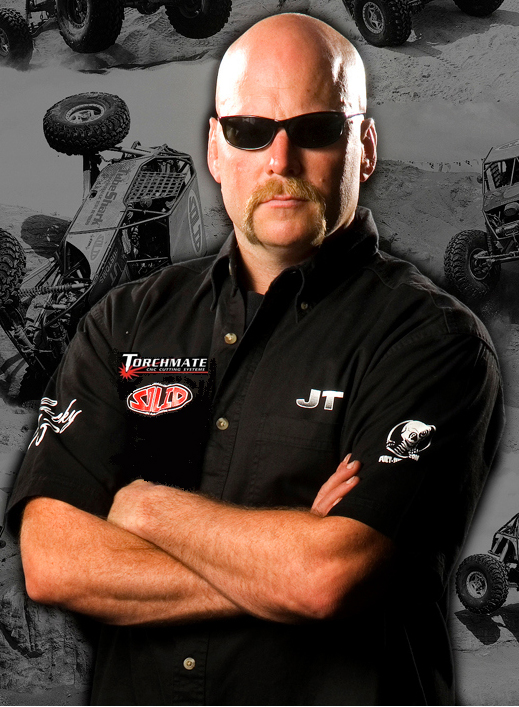 JT Taylor is the epitome of “been there, done that”. A retired First Sergeant who returned from the Iraq conflict with a Bronze Star, Taylor uses the skills that he honed as a soldier to manage multiple racing teams needs. His strategic and mechanical capabilities have served him Crew Chief positions with Brad Lovell, Speed Technologies, Shannon Campbell, Dirt Sports and Lucas Oil Off Road Racing Series SuperLite #16 race teams. He was the Crew Chief for Speed Technologies 2008 Class 1 Baja 1000 win, 2009 Baja 500 Torchmate Racing finish, and co-drove and was crew for the 2009 Baja 1000 and the 2010 and 2011 NORRA 1000 win. It would be foolish to think that Taylor is only handy with a wrench; he is just as comfortable behind the wheel. JT Taylor is one of the original thirteen competitors of King of the Hammers who has raced every year, winning the 2011 Torchmate Stampede and placing 2nd at the Ultra4 Grand Prix.* Taylor consistently held a top ten position in XORRA for five years and is the two-year reigning champion of the XORRA Germany Series. He is the 3 time Colorado Hill Climb Association Ultra4 Champion and made history as the first Ultra4 competitor to run Pikes Peak, where he won the Exhibition class in 2010 and was 2nd in the Pikes Peak Open Class in 2011.* JT Taylor is the person you want on your team.

25 years ago, Brad Lovell was bouncing around in the back seat of his father’s Bronco in the backwoods of Colorado. The family camping trips turned into a passion for Brad and his brother Roger. After spending a decade tackling the toughest off-road trails in the country the pair entered their first rock-crawl and went on to win 6 consecutive season championships. Since then the brothers have earned multiple wins while racing nearly every type of off-road discipline – desert, rocks, hill climbs, and short course racing. The team’s focus is winning the TORC Series where Brad pilots the #44 AMSOIL Torchmate Nissan Frontier. The 2012 season holds a variety of races for the team including King of the Hammers, the legendary Mint 400, the 90th Pikes Peak International Hill Climb, and World Championship racing at Crandon. Follow Brad at**Facebook*/ Lovell Racing. 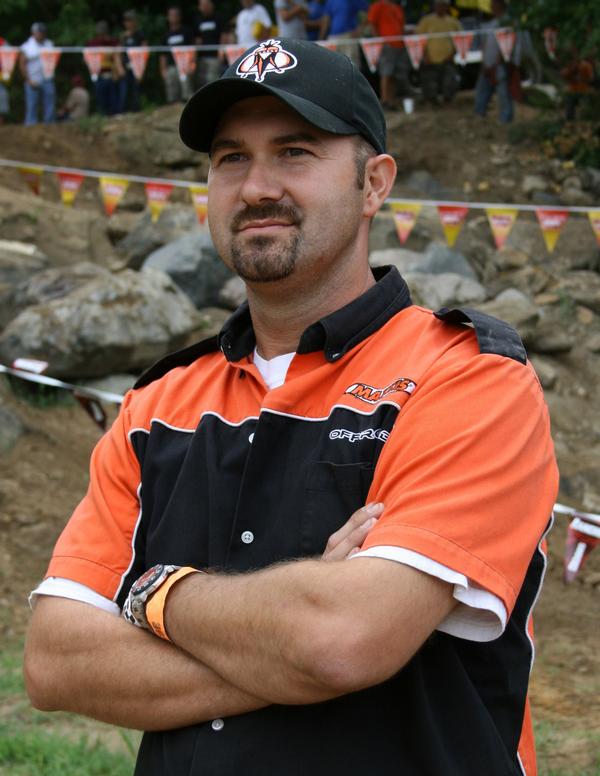 Rusty Bray is a Richmond, Ky. based driver that is one of the newest member’s of the Torchmate Racing Team.* Rusty has competed across several disciplines of off-road racing including rock crawling, rock racing, the Baja 1000, motocross, and side-by-side racing.* He has won as a co-driver in the Baja 1000 jeepspeed class, 2007 XRRA east series champion, 2008 east coast Werock finals champion, 2011 Rausch Creek Ultra4 Winner, and 2011 KOH finisher.

Torchmate, a Lincoln Electric company, is headquartered in Reno, NV and manufactures custom CNC plasma cutting tables and other automation solutions for manufacturers worldwide. For more than 30 years, whether with a plasma cutter, router, water jet, engraver, glue gun or other tools, Torchmate has provided more options, accessories and innovations than any other CNC cutting table manufacturer. For more information, call toll free at*(866) 571-1066*or internationally at*(775) 673-2200, or visit the Company’s website,*www.torchmate.com.

The Lincoln Electric Company, headquartered in Cleveland, Ohio, is the world leader in the design, development and manufacture of arc welding products, robotic arc welding systems, fume control systems, plasma and oxyfuel cutting equipment and has a leading global position in the brazing and soldering alloys market.


Torchmate racing prepares for the 2012 King of the Hammers with a full schedule of activities is a post from: RockCrawler 4x4 and Offroad Magazine