OK, I've been trying to track down a weird groaning/dragging sound under acceleration from a stop that started after my family Death Valley camping trip two weekends ago. After some false positives thinking it was slider/cat contact, I narrowed in on possibly rear brakes...

I put the truck up on jackstands and ran it in drive, and noticed the passenger rear wheel wasn't spinning at all (both fronts and the driver rear were though.)

I then noticed the parking brake only seems to be impacting the driver side rear wheel--parking brake pulled or released, the passenger rear wheel exhibits the same (very small) amount of resistance to turning. (I should note I got a slight burning smell from this wheel on said camping trip after heavy downhill braking which I haven't looking into yet either.)

I have taken the drum off and am looking at the parking brake, but am not entirely sure I see an obvious problem here. Can anyone offer up thoughts? This could be a dragging caliper as well, although the fact the parking brake doesn't seem to do anything on this wheel has me thinking I should solve that problem first. Brake pads (I replaced in June) look to be wearing evenly/fine (only been in for 5K miles.) 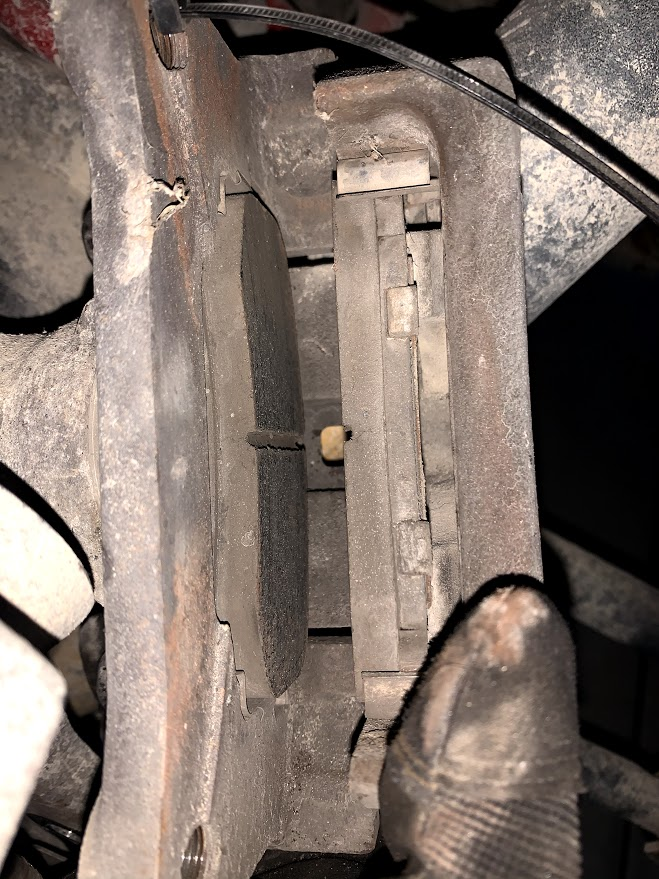 I've been referencing this thread, but let me know if there are others of relevance.

I measured the shoe as per the FSM and it's at 4mm, which suggests the PO may have had this replaced...also looks to be wearing pretty evenly from what I can tell. 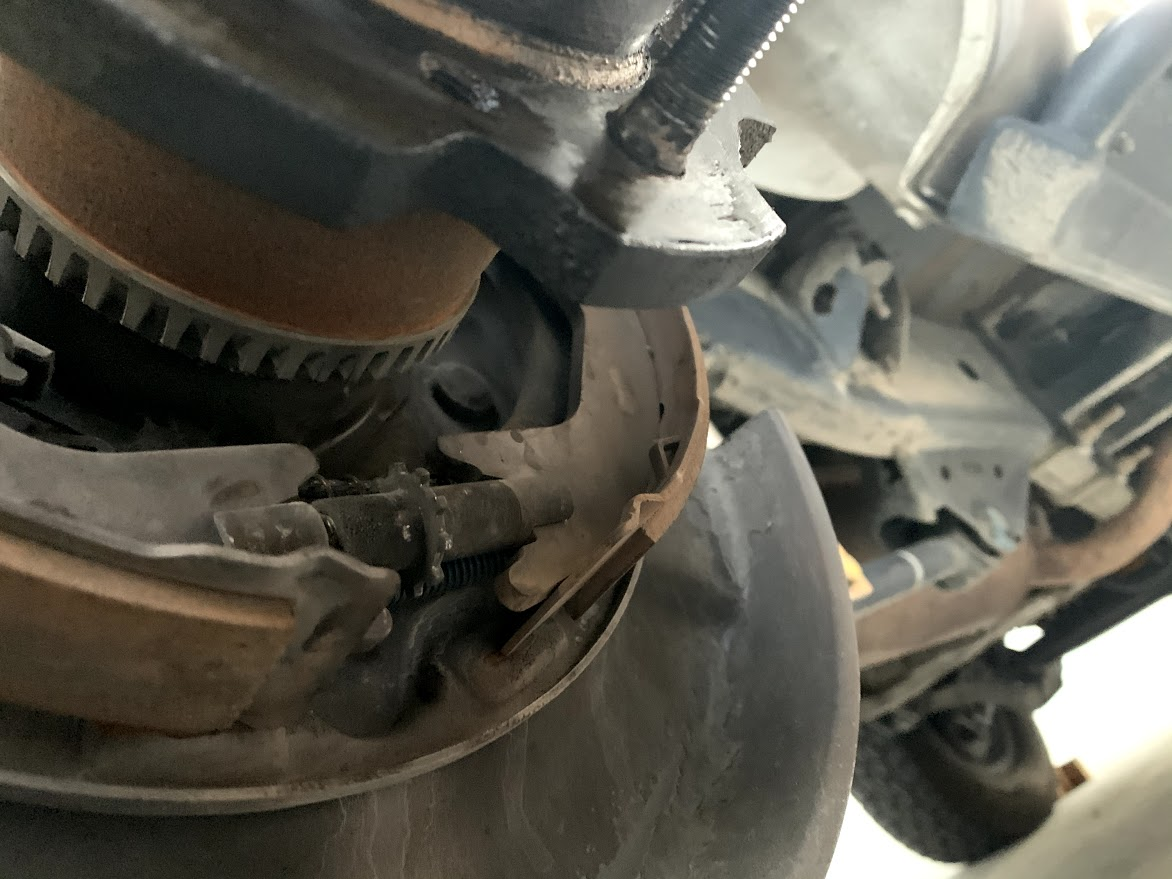 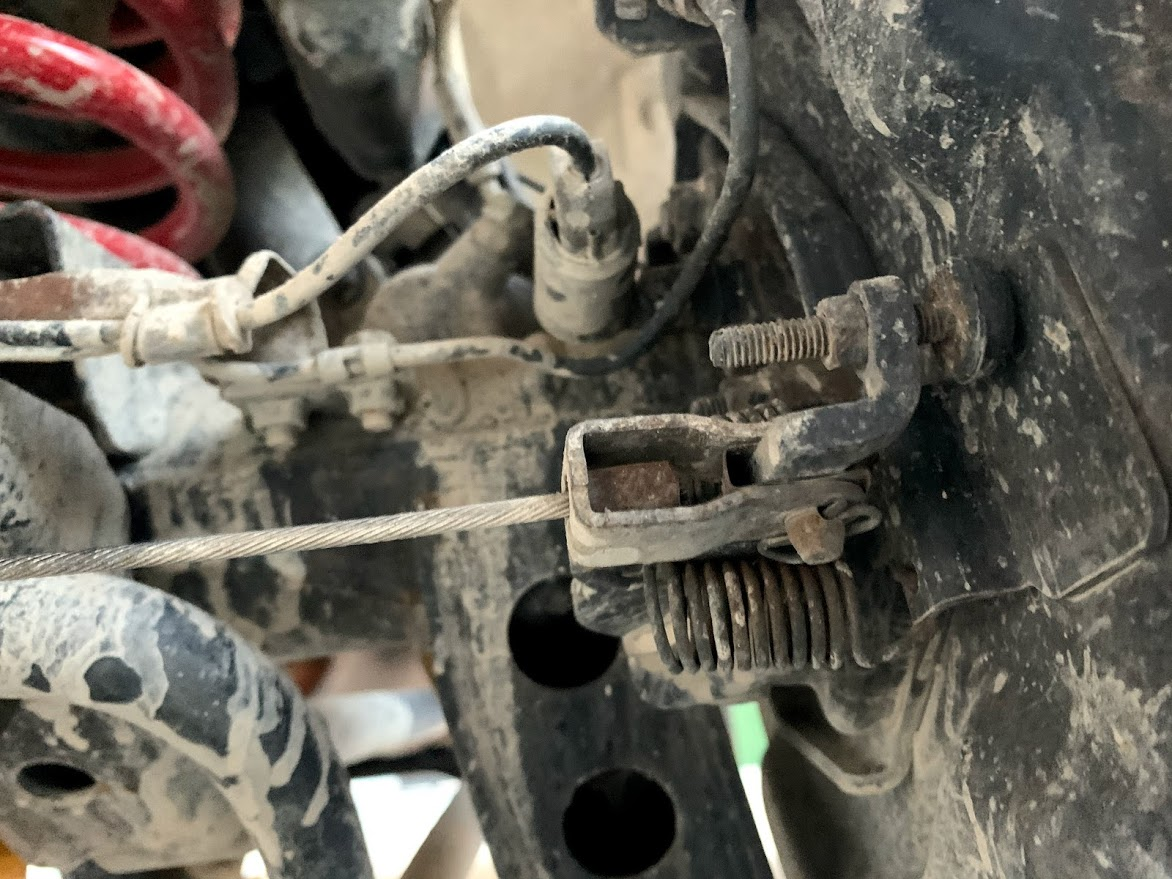 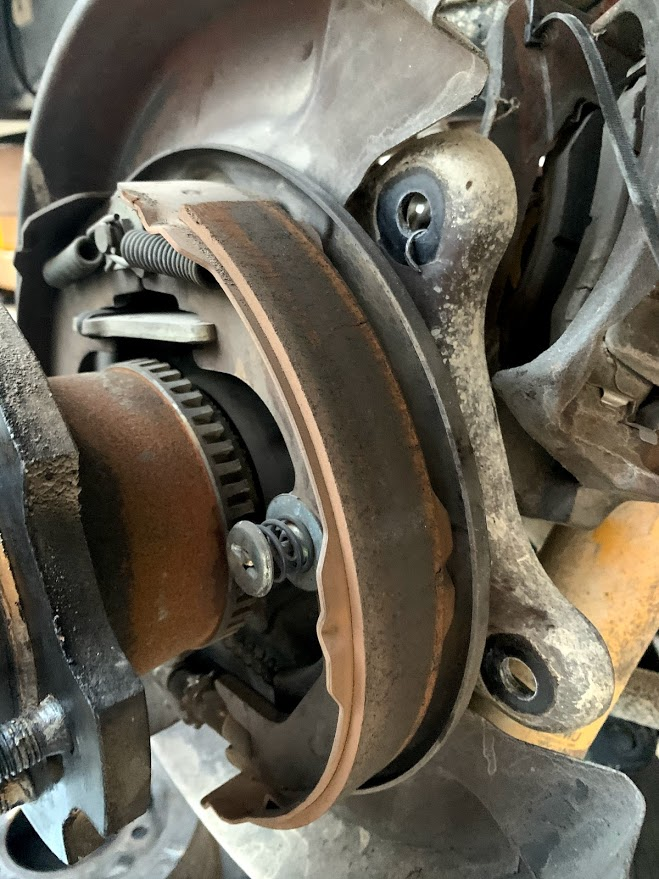 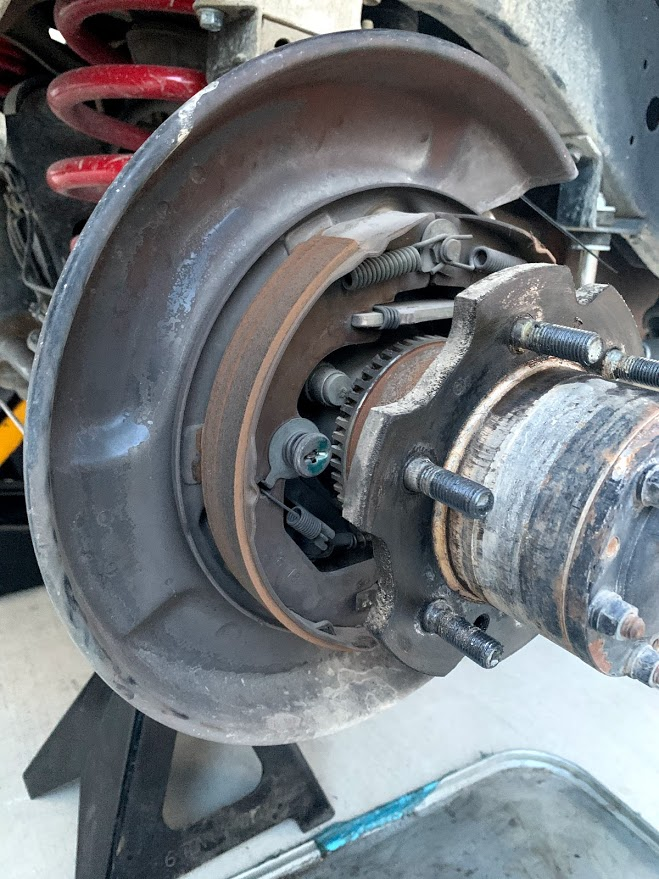 Can anyone suggest next steps? Could this just be the thing got knocked out of alignment and I turn that little adjuster sprocket or tighten up the nut on the backside? I've not messed with a parking brake before so not sure what the usual methods are.

bumping in case anyone with eagle eyes can spot an issue, or suggest some next steps.

Do your arms on the back pivot like they should and spring back or are they stiff and hard to move so they might be "hanging up" the brake shoes on the drum?

Is the inside of the drum clean and rust-free?

It looks like the one shoe is damaged on the surface of the braking material. It appear to be "feathered" which is an indication of dragging. (pic 4 above)

Also, your star adjust on the bottom should move freely against the spring and should be adjusted per the FSM. Make sure the star adjuster is properly lubed with white lithium grease on the threads.

If it was mine, I would probably replace the shoes due to that feathering because the pad will delaminate from the shoe and sieze the wheel at the most inopportune time.

Use emory cloth to clean up the inside of the drum and BraKleen to remove all dust and oils from the shoes as well as the drum/rotors.

BILT4ME said:
If it was mine, I would probably replace the shoes due to that feathering because the pad will delaminate from the shoe and sieze the wheel at the most inopportune time.

Use emory cloth to clean up the inside of the drum and BraKleen to remove all dust and oils from the shoes as well as the drum/rotors.
Click to expand...

Thank you! I didn't notice that but see it with you pointing it out. All the springs seem to be working OK from what I can tell, I was mainly looking for the corrosion of the lever that comes through the back side of the dust shield, which looks to be alright.

I went through this with my '94 and one of my '95s this summer. The fix (my '94) is to remove the boot on the parking brake lever and get it to swivel FREELY. When it's right, a light breeze will move it. I had to soak it with PB Blaster for several days and encourage it with a ball peen hammer to get it loose, and then in in Ed's Red (ATF & parrafin) for weeks to get it to move. (The soak was required because I had to polish all the piece parts to clean them sufficiently, and that removed the cadmium/zinc plating)

If you don't have that kind of time, you're stuck with option B (my '95), which is to replace the boot, lever and pin and whatever other parking brake components are stuck in the "brake on" position. You have to fix both sides, one side won't do it. Due to a lack of timely attention, I had to completely rebuild the '95's rear brakes, and I do mean completely. It's not cheap.

Disconnect the parking brake cable at the lever, after peeling the boot back (it won't come off until you separate the cable from the pin). Spray it with PB Blaster or better (not WD 40, please) (ATF and denatured alcohol, mixed 80/20 is really best but I can't get it in a spray can) for at least a couple of hours; two days will be better if it's really rusted. Tap the lever forward and backward on the pivot pin an try to loosen it so that it'll pivot freely. This took a couple of hours on one side and less than fifteen minutes on another. Don't stop until this thing easily moves. Don't go on to the next step until you get this far, because anything else you do before you get the lever to pivot freely will be a waste of time. There are adjustments that have to be made to a WORKING parking brake, which depend on all the components moving FREELY.

The FSM parking brake adjustment procedure will get you to 100% after this. Note that the FSM procedure wasn't written assuming that your parking brake system would be 25+ years old and rusted; it was written for the truck as delivered from the factory, so you have to get it to that state before the FSM is really helpful.

FWIW, I have had better success removing brake dust, etc with denatured alcohol than any of the commercial brake cleaners. It is also the only thing which will completely remove brake fluid. It's way cheaper too.

As a side note, I packed my rubber boot on the back side with Lithium grease to keep out water and keep it full of lubricant. I did not use wheel bearing grease because it is designed to melt and move. White lithium does not.

@Malleus that's great info, really appreciate it. Good to know I need to mess with both sides...I don't love that answer but it sounds like hard-earned knowledge on your part. Now to go order some parts.
You must log in or register to reply here.

B
Can't get E-brake adjusted