Hello - I wanted to take a minute and introduce myself and my FJ40 to the forum. I'm a married father to two young boys (with a baby girl on the way) and I live in Marin County just north of San Francisco. I'm starting a 'refresh' on my 1974 FJ40 that I've had since 1998. She was in pretty decent shape when I bought her but she lives outside and always has - so between the mild elements of northern California and my serious neglect at times while busy with other facets of life - she needs some TLC. My two boys LOVE the cruiser and take great joy in correcting other parents at preschool drop off when they mention that they like our Jeep - they're making me proud.

That's the short story - I've read a few other 'long' stories about their cruiser background so I've taken a stab at documenting a bit of how I got started below. (It got long....so skip to the bottom now if you want to save time

I purchased my first FJ40 a few weeks before I had my drivers license - it was a beautiful beast - with the rust to match the competition orange paint job. Was a 65 with most of a hard top. Sadly - that rig met its demise in an accident and left me with a permanent reminder of her (especially after a haircut). I knew immediately that I needed another FJ40 - in 1999 after an exhaustive search I found a great price on a 1974 up in Port Angeles Washington and I convinced my brother to fly up there with me and road trip it home. What could go wrong buying a one way ticket to purchase a 25 year old car right? We flew into Seattle and got on a small prop plane to make it to the tiny 'international' airport in Port Angeles. The seller met us at on the tarmac and after a quick once over and the handing over of 5 or 6k in cash and signing the title my brother and I were off.

We detoured slightly leaving the airport so we could at least 'see' the Canadian border (neither of us had been so far north before) and then we headed south. Nothing like trying to learn the personality of a rig than a quick nearly 1000 mile road trip. We made a few stops on the drive home highlighted by a stop to visit my sister who was going to college in Oregon at the time.

Once home I learned of my first mistake was that they original person at the DMV that I had checked with had been incorrect and I had to SMOG the FJ40. A few months - lots of headache and conflicting information - the engine throwing a rod - 3 trips to the SMOG referee - a new Chevy 350 Crate motor removing the CONFER auxiliary fuel tank (which was a god send on the 1000 mile trip home) and new EGR equipment and we finally passed SMOG. Fast forward a few years and we were SMOG exempt and over the years I've slowly removed the SMOG equipment that had been forced on it.

My interest and focus was high in the early 2000s - fixing what my limited knowledge could - buying the things that I could not (4-wheel disc conversion) roll cage. There was a mishap with the factory rear tire holder that ripped the top and bottom hinge mounts through the quarter and rear sill - which led to my younger self thinking a great solution was to add Diamond Plate and a Kayline tire and jerry can rack to the back. Had a lot of fun exploring the Tahoe side of the Rubicon trail and surrounding system (never ran the whole thing.....bucket list item....) Never a serious rock crawler - since I lacked the funds (or skill) to make major repairs.

The 40 moved from my primary and only vehicle to a secondary vehicle that I rarely drove after parking it at my parents house when I was living in San Francisco. I moved my primary mode of transportation to a BMW motorcycle. Fast forward to marriage and then moving out of San Francisco and I finally had a place to park my 40 again and it was the first thing that moved to the new house. After so many years sitting idle and then forced into a summer of driving around town she began leaking all over town. So new rear main seal and valve covers and I can't remember everything else we sealed up simply to use as a fun around town car that my wife could enjoy driving to the market as well.

Watching my two boys (3 and 5 now) grow to love the FJ40 has given me a renewed interest in preserving and refreshing what's there.

I've always drooled over the perfect restorations and always thought 'someday' I'd do that too - - but the reality of life - - cost - - and my skill level will yield a 'less than' but still hopefully 'pretty good' result.

I'd like to preserve what's still there - and make her look as good as she did back when I bought her (or maybe better).

In scrolling through my photos I realize that I seem to only take pictures of other peoples 40s.....so not too much to share photo wise today - but I will in the future and I'm sure I can find some old prints of that first roadtrip so I can compare the 'then' condition to the 'now' - - and then hopefully the 'future'.

Sorry for the long intro - - hopefully you only read the 'long' story if you had time and wanted to....I gave you an out up top.

I look forward to being an active part of the forum.

Here's a photo of my boys helping work on her. I'll find some others to share as well. 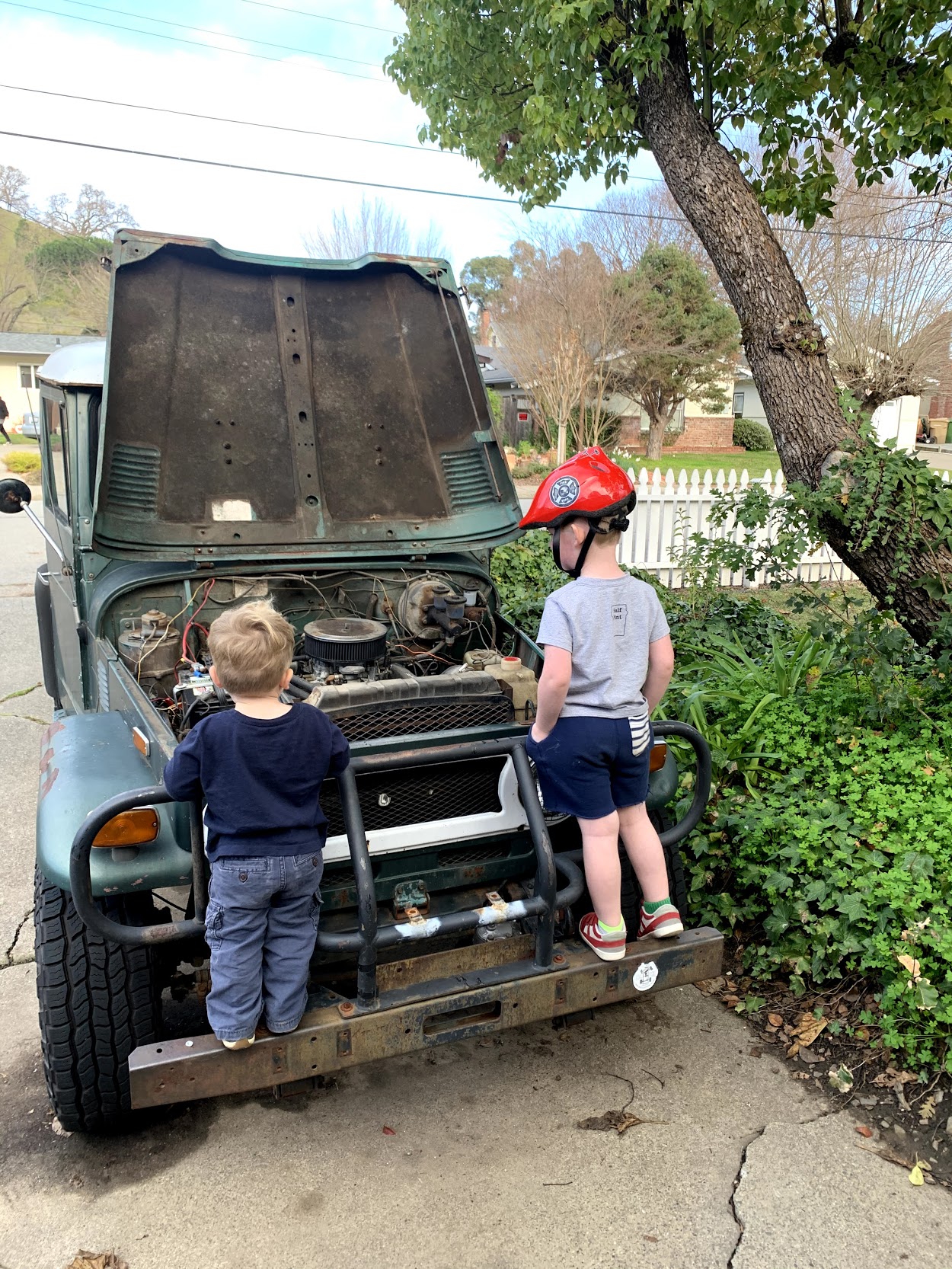 Nice intro. Your picture reminds me of when my boy were little. Those were good times, they always wanted to hang out with dad and help on projects. Now they are 25 and 22!
They will love riding around in the Land Cruiser.

Yes - my boys love “helping” me with any of my projects. Sometimes I have to remind myself that while their “help” isn’t always the best - it won’t last forever so I’m focusing on appreciating and soaking it all in. I think of it as deposits in hoping they still want to hang out with their old man when they’re in their 20s!

Ih8mud.com stickers ,,where did you all put yours.
2

New to IH8MUD but not new for Cruisers