Hello to All:
About a year ago I went to the Miami Auto Show and saw the FJ Cruiser. I really liked the look and functionality, but the two tone paint was not my mug of beer. I’ve been a full size domestic pick up truck guy for over 20 years. Anyway, a few weeks ago I saw a TRD FJC and that pushed me over the edge to seek one out for myself. I went home and did an internet search of South Florida Toyota dealers to see if any were available. I found two, one was a demo and the other was being purchased. I contacted the dealer for an out the door price on the demo and he told me it was already bought, but that the Ft. Lauderdale car show just got over the past weekend and Toyota had dropped a FJC TRD off that was displayed at the show. Needless to say I scurried over to the dealer and bought it on the spot. Well, you may be wondering what a flat-lander from south Florida would want a marvel of engineering such as a FJC for. First of all I had to convince my wife that with the oceans rising because of global warming and the monsoon season ready to begin in June, we may have to ford many intersections and Interstate highways, Also, tooling around with her in her 350z Roadster is not good for my inner child, and I know I’ll have to check the woods out behind my property in the Georgia mountains.
I’m glad I found this site and hope to gain some insight from everyone. 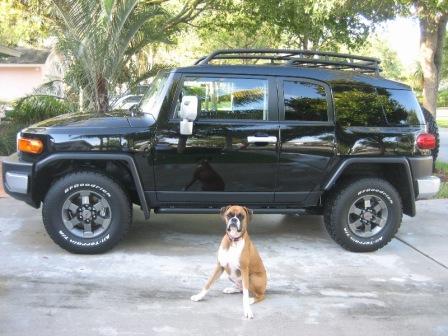 Good luck with it.

I'm hoping to keep it at least 300,000 miles or more. It just depends if I can make it that long . I didn't plan on making any mods, but after looking at all the great things you can do I've been researching them. I finally put 1000 miles on my FJ so I hooked up my boat to see if I have enough muscle to tow. Not much change in handling and the motor seems like it can handle the additional weight with no problems. The boat is a 1983 19 foot Grady-White and I use to pull it around with my Dodge pickup.

i'm at almost 3000 miles and i'm jsut starting to notice the engine loosen up some. admittedly i drive like a grandma on the pavement for the most part. as far as break-in in concerned theres several schools of thought, one is that if you hit redline as much as possible in the first 25 miles or so of your engines life it will actally seal better because of the surfacing they do at the factory on the piston sleeves. new engines arent desigend like they were in the 70's and 80's and ostensibly have a much shorter break in period. OTOH while this makes sene and i do believe its true (i've done a lot of researrch on this) like i said i've also noticed the engine begin to loosen up a little more after about 2500 miles. almost like a secondary break in. my only idea is that being that this is not a rac eengine with a 4 hour life cycle, the assembly is done up tight so as to provide a long life to the motor. i've tried a hybrid break in approach and its worked remarkably well. i gave it a lot of throttle on the way home from the dealer, and since then i only really get on it about once every 50-100 miles or so (unless i'm wheelin and i need to) i'm planning on getting it dynoed here in a couple months we'll see what kinda results it turns up.
2007 FJC "the short bus" friggin yellow!
AT/4x4
factory locker
A-TRAC mod
TuT Pirate.

the Amish do it with Hoes.

FJTex
Because the engine block is aluminum with steel sleeves is there any concern about breakin periods that I should be concerned with?

not to my knowledge. but i'm not a mechanic. you could assume that the difference in rates of expansion between the two metals would have a factor in the long run, but i'm certain that Toyota would have taken this into account. tbh i redlined my truck off the lot. if you're uncomfortable with that idea... by all means dont do it. i think that a modern car is pretty safe to break in any way you want. many vehicles (exotic sports cars and sport bikes) get redlined and taken to max speed before even getting to the dealer. obviously you probably arent racing your FJ but i dont thing that a hard break in would hurt its longevity either.
2007 FJC "the short bus" friggin yellow!
AT/4x4
factory locker
A-TRAC mod
TuT Pirate.

the Amish do it with Hoes.