LONG BEACH, Calif. (April 8, 2017) – Matt Brabham of Gold Coast, Queensland, Australia managed to avoid the carnage in the first half of the race to work his way past competitor after competitor and hold off a late charge by fellow Australian Paul Morris to earn back to back SPEED Energy Stadium SUPER Trucks victories of the young 2017 World Championship. 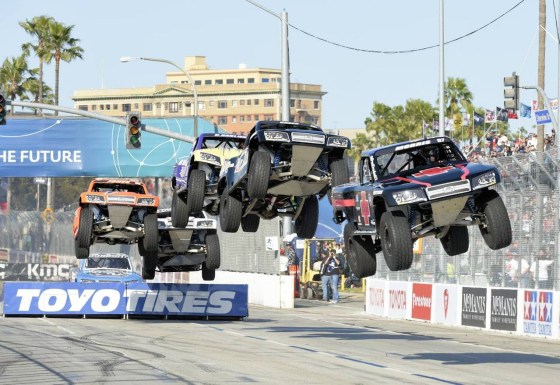 Friday’s Fast qualifier did not miss a beat on Saturday starting from the last position after the full field inversion.

The SafeCraft Safety Equipment entry worked his way to the front of the field following Norwell, Queensland, Australia driver Paul Morris driving the LIVE backed entry. By the fourth lap the only two Australians in the field were leading 10 other hungry American drivers.

Brabham would make several attempts at passing Morris as the two would put on a incredible driving exhibition for the thousands of fans whom lined the fences all around the 11-turn 1.968 mile temporary street circuit along the picturesque Pacific Ocean. Brabham would make a daring pass inside of Morris at beginning of Lap-7 to grab the lead.

However, the red flag would fly over the track on mid way thru Lap-7, as Burbank, California driver Erik Davis in the Always Evolving truck would bicycle his truck in his corner tipping it over on the side, and make heavy contact with the outside wall. The stoppage of the race would allow Morris to regain his composure, and make another attempt at the lead of Brabham on the restart.

Drafting Brabham down the long front straightaway Morris was able to slingshot past the young Brabham at the last second to grab the lead back. Racing clean as they can in SST racing Brabham would stay right in the tire tracks of Morris for the next 4 corners until he was able to set him back up for a last lap pass for the win.

Making his return to the Grand Prix of Long Beach since 2014 Gavin Harlien of Mesa, Arizona driving the Royal Purple Synthetic Oil truck would look to backup his previous successful finish. Starting in the seventh position Harlien would remain with the lead pack the entire race even contesting Brabham for the second position on Lap-6. Harlien would survive a real test the last three laps of the 9-lap race as Robby Gordon would be right on his bumper stalking every move to get by. Harlien would hold off one of the greats of SST racing to record his first ever SST podium.

Orange, California driver Robby Gordon sporting the Toyo Tires/ KMC Wheels livery this weekend would hang back in the pack waiting for things to sort out avoiding all of the carnage the first half of the race. After the competition caution Gordon would continue to pick off truck after truck through the field to ultimately finish in the fourth position after contesting Harlien multiple times for the third spot.

Jeff Hoffman of Phoenix, Arizona would show strong signs of competing for a podium early in the event keeping up with the quick pace of leaders hitting all his braking points and learning to conserve his equipment in only his sixth asphalt race ever. The young Hoffman would avoid contact with the other competitors and go on to finish the event in the fifth position.

Arie Luyendyk Jr. of Scottsdale, Arizona driving the LIVE/ United Fiber & Data truck would encounter a flat tire early in the first half of the event and would drop back in the field after a quick visit to hot pit area to change it. After the competition caution would re-group the field back up Luyendyk would battle through the hornets nest of trucks to finish in the sixth place.

Making his first ever Stadium SUPER Trucks start Myles Cheek of Anaheim, California would drive a smart and conservative race learning his braking points and staying out of trouble to finish the CMI Precision Machining truck in the seventh spot.

Davey Hamilton Jr. of Indianapolis, Indiana racing in his second straight SST event in the Always Evolving truck would run up front for a small portion of the event leading two laps before the missing his mark in the braking zone and loosing multiple positions to settle back mid-pack battling hard in the chaos. Hamilton would go on to finish respectively in the eighth position.

SPEED Energy/ Toyo Tires driver P.J. Jones of Scottsdale, Arizona would go on to finish the nine-lap event in the ninth position after late contact with Arie Luyendyk Jr. would send him spinning from his sixth place running position.

Bill Hynes of Nazareth, Pennsylvania battling through a case of the flu would safely navigate the United Fiber & Data/ LIVE truck to a tenth place finish after encountering brake issues early in the event.

The rollover on Lap-7 for Erik Davis was just far too much for the Always Evolving truck as the damage acquired would force the truck to be towed off the racing service crediting Davis with the eleventh position.

Lodi, California driver Troy Deide would loose the handle on his Deide Construction truck going for the lead on Lap-2 making extensive contact with the outside wall. The damage to the front end was just too much to continue causing Deide to pull off the track and be scored in the twelfth position.

The second and final round of the SPEED Energy Stadium SUPER Trucks at the 2017 Grand Prix of Long Beach will take place Sunday at 4:05 PM PT just after the completion of the IndyCar Series event.

About SPEED Energy Stadium SUPER Trucks Influenced by the former Mickey Thompson Stadium Off-Road Racing Series, where drivers such as Gordon, Casey Mears and seven-time NASCAR champion Jimmie Johnson got their start, Gordon created SST in response to the public’s overwhelming interest in trucks and off-road racing. His plan to re-launch the former stadium series has led to exciting racing on both asphalt and dirt, while producing one of the most extreme forms of action sports today.

Other than the trucks launching 20 feet in the air covering distances more than 150 feet, what sets the SST program apart from other series is the fact that all the SST trucks are identically prepared and delivered to drivers in race-ready condition. Race winners are decided by driver skill rather than individual team engineering and budgets. Drivers and their personal mechanics are assigned specific SST mechanics who together tune and make minor adjustments to the 600-horsepower trucks.

Team Nitto Tire Sweeps the Podium at King of the Hammers