Man, they are BRIGHT!!!
EDIT: Just drove them at night on some dark windy roads and damn. It lights up everything. Even my wife was shocked at the difference when I turned them off. Very happy with the purchase at the moment. 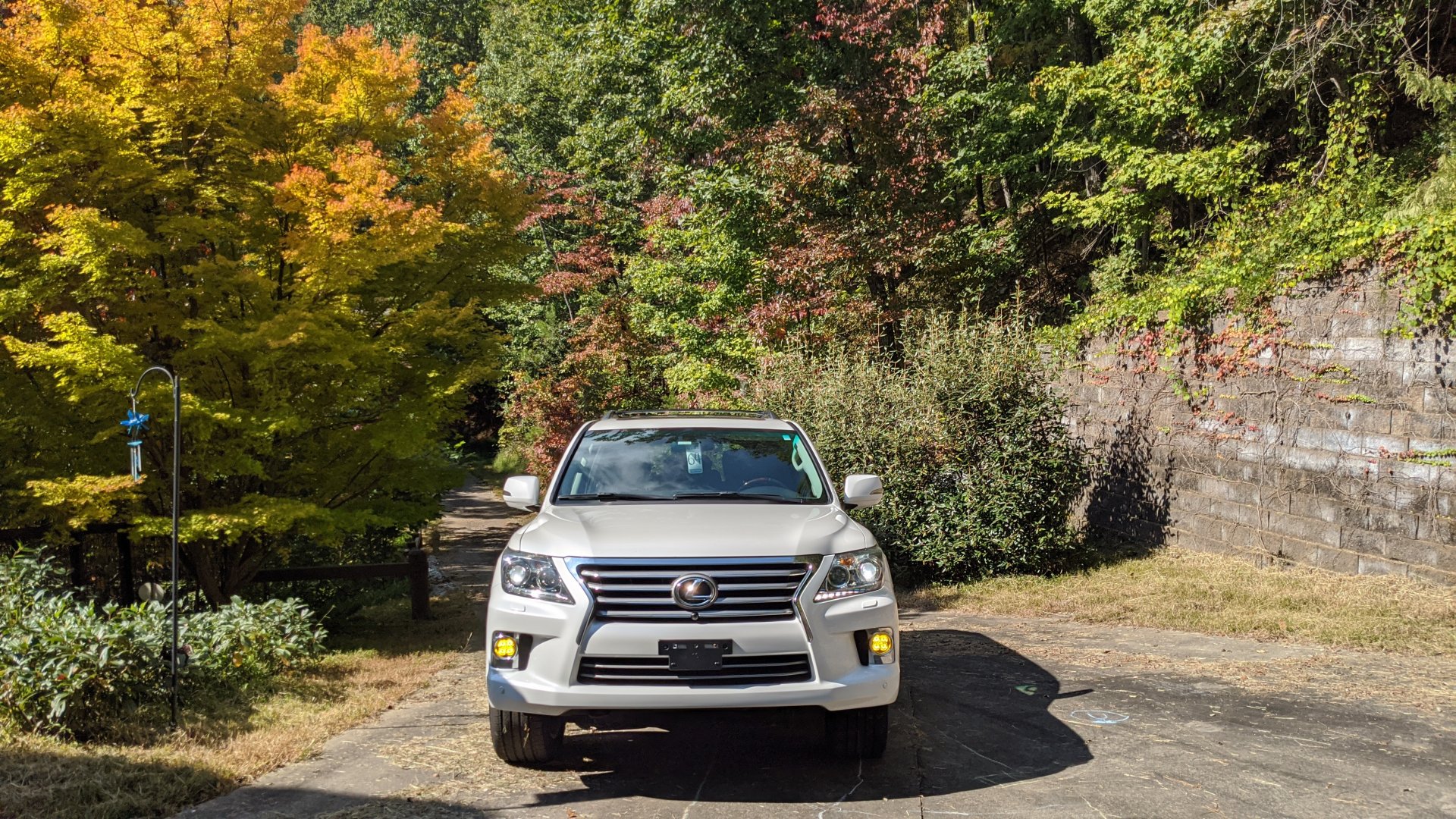 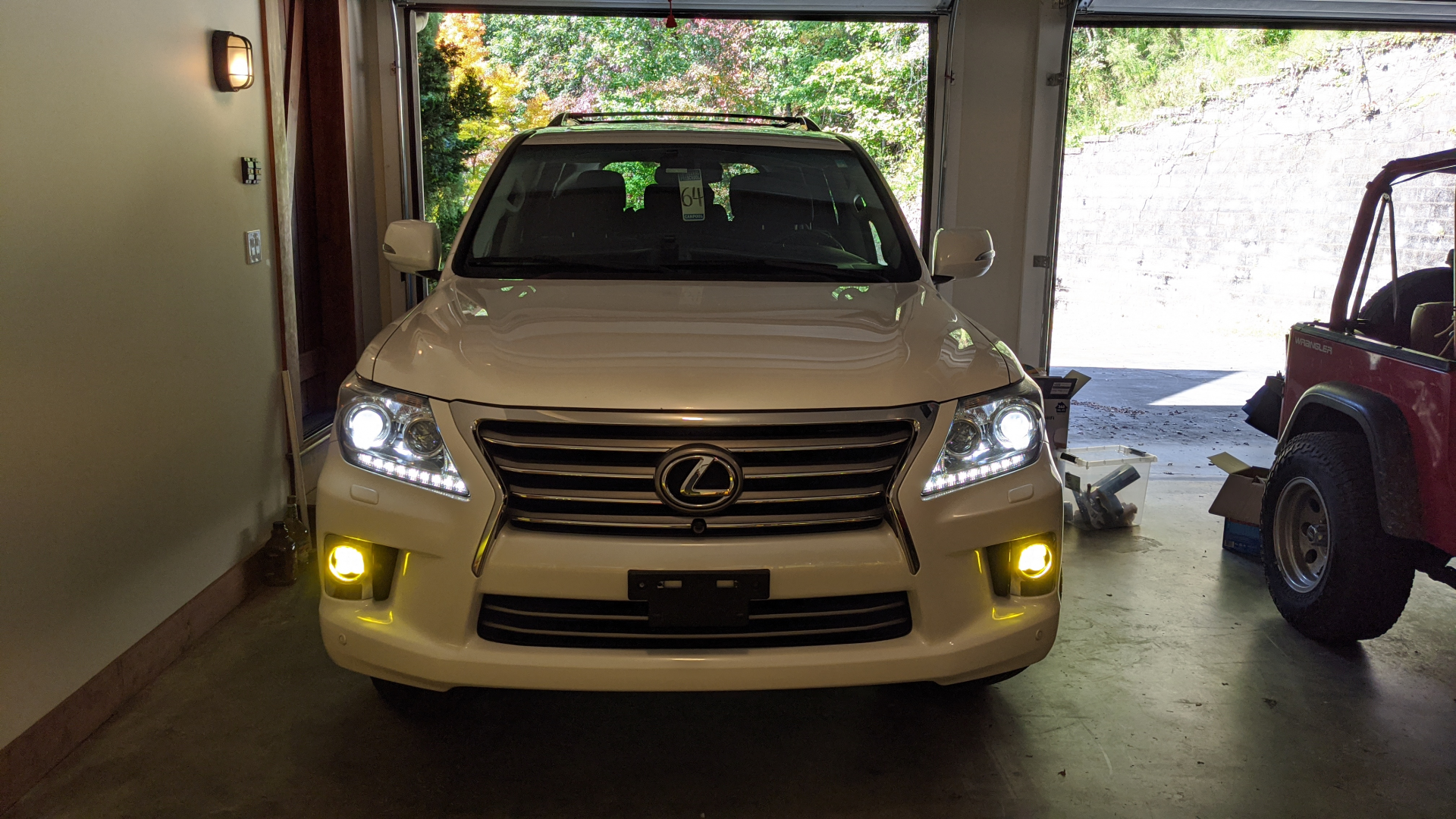 I thought I would add a little install instruction after this because all I can find online is an RX and they are pretty similar, but not exact.
Last edited: Oct 6, 2020

INSTALL FOG LIGHTS ON 2013 LEXUS LX 570:
As I said before I could only find a guide on an RX and wanted to put out a specific LX guide.

Step 1 - Access:
The way to access the fog lights on the LX is through the wheel wells. There is a one piece cover that extends from under the front corner of the car to the back of the wheel well. It is held in place with three 10mm screws, three torx (star) style screws and about 7-10 of the pop clips similar to the engine cover. Two of the 10mm bolts have a clip holding them in place and two of the torx bolts do to. These clips are for sure the trickiest part of the entire install. Once you figure out how they work, you could probably complete this part in less than 5 minutes. As it was. this took me about 20 minutes on the first and 10 minutes on the second. Turn the tire towards the opposite side you are working on. 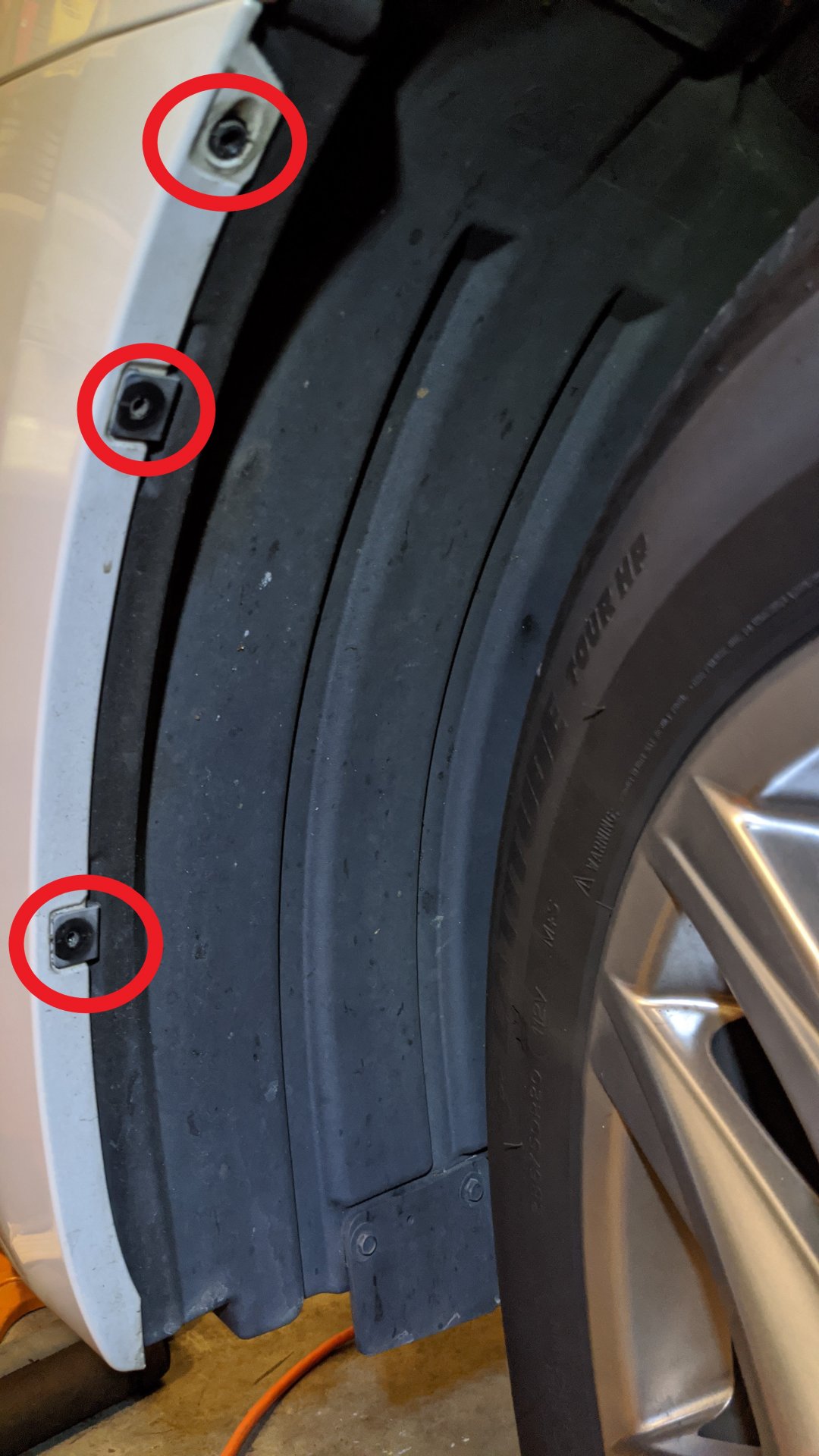 The bottom two torx screws are the ones that have clips on them. 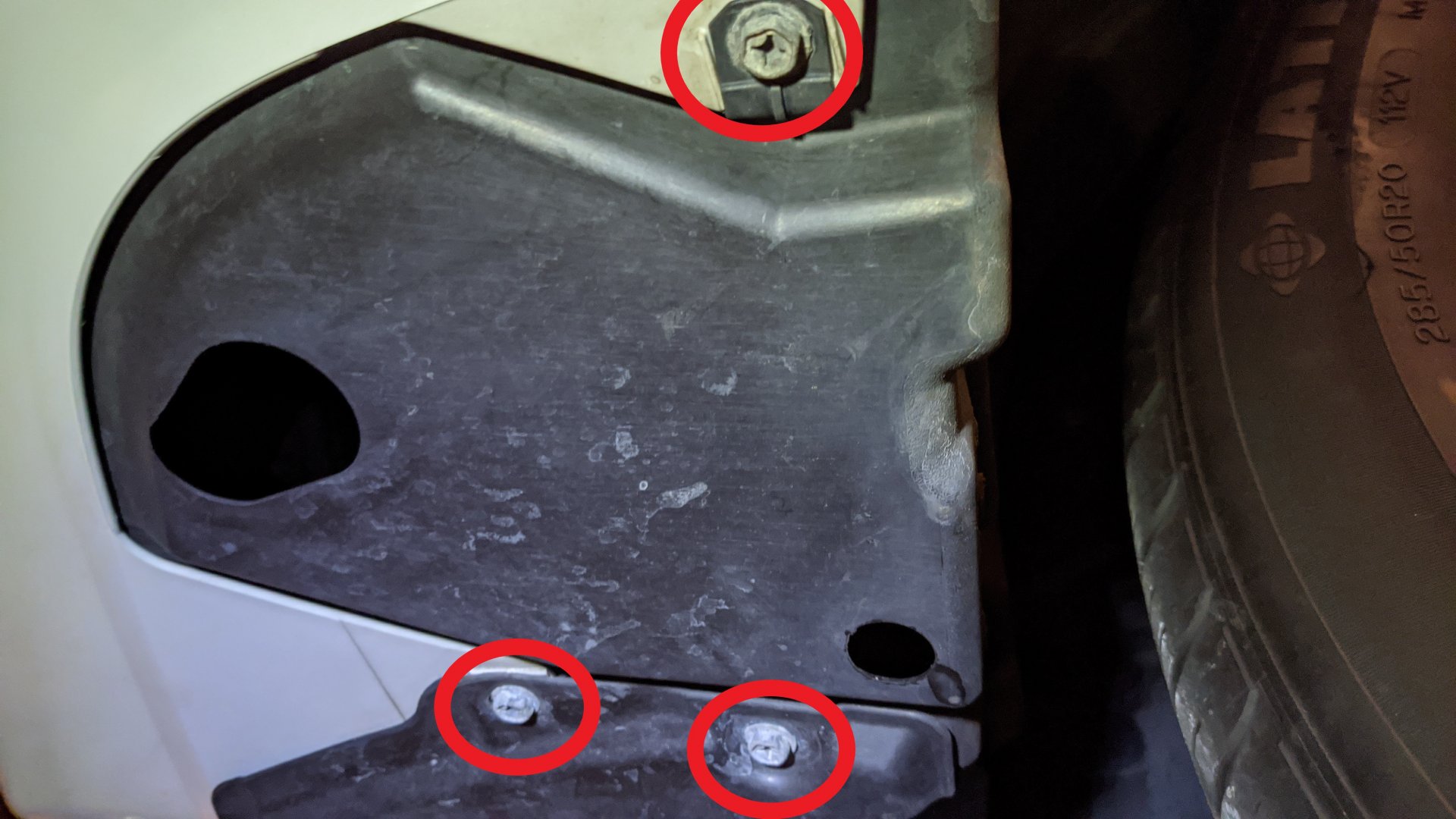 the two 10mm screws closest to the wheel have clips. 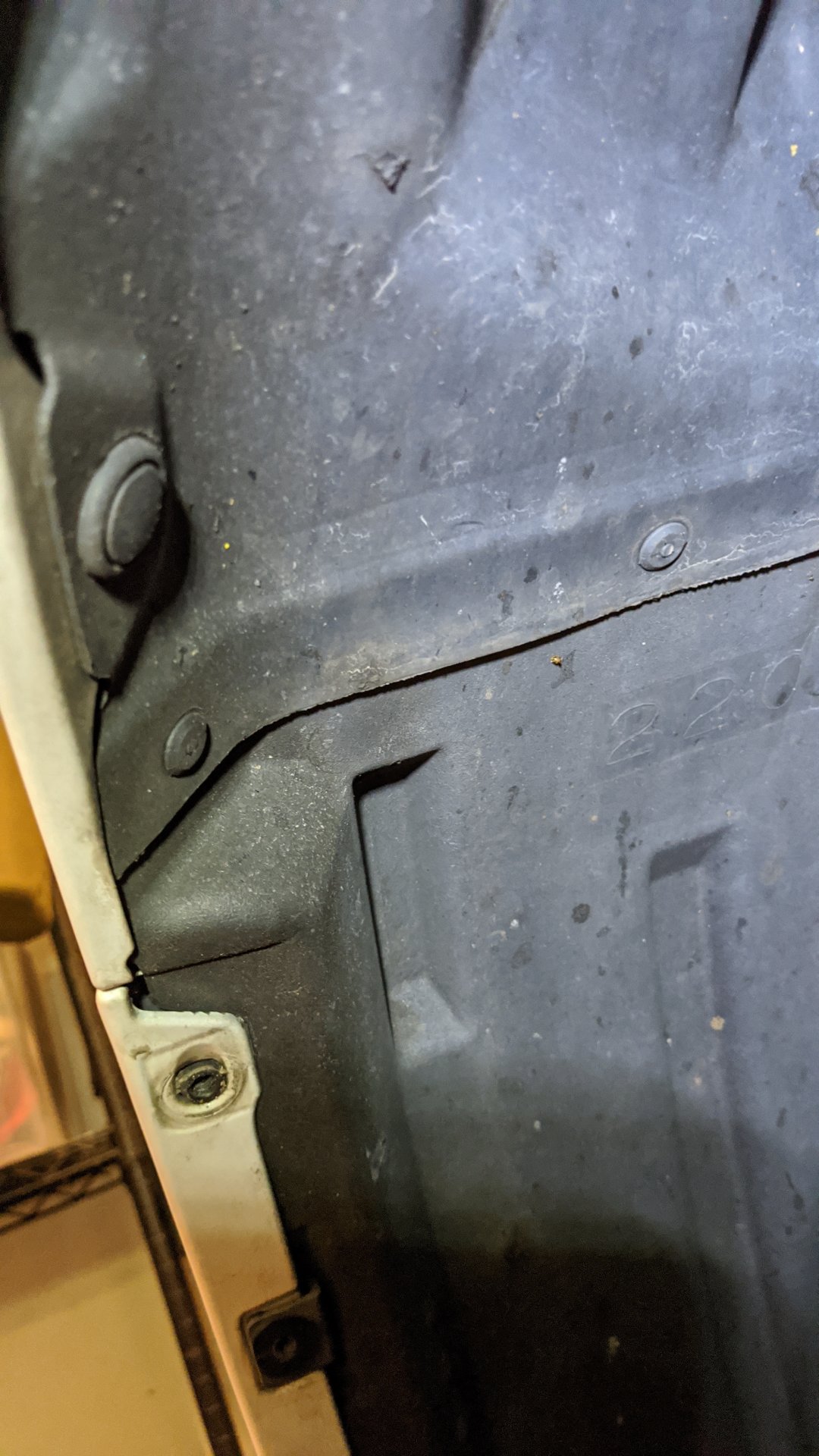 This was the only clip along the outer wheel well that was really needed to remove. It is just above the torx style screws If you like to work in a wide open environment then you could pop all the clips really easily, but it just isn't necessary for how simple the actual replacement of the fog light is.
So I popped this on and the following one circled in the front back of the wheel well. 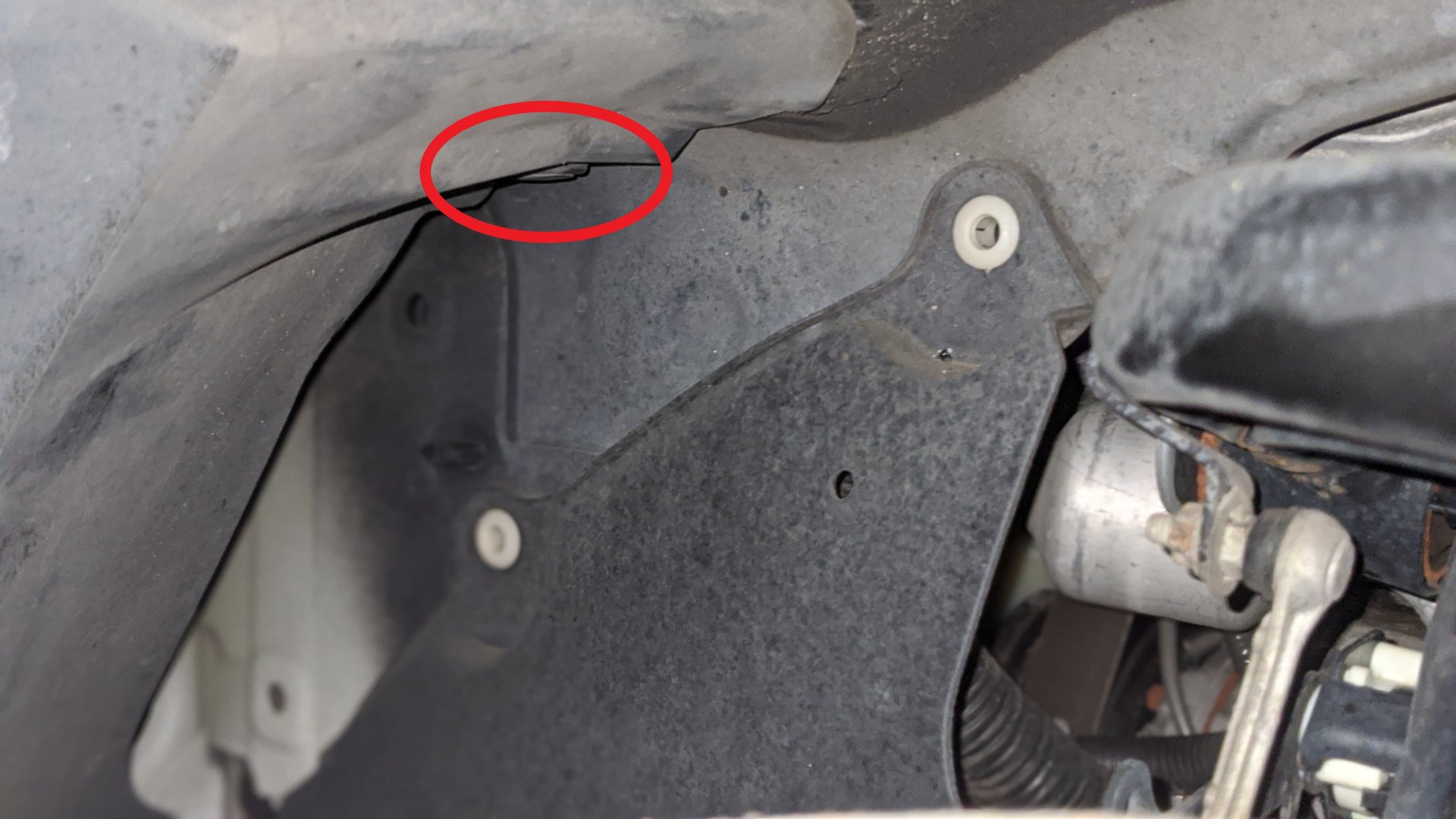 The next part is a bit of finesse and a bit of brute strength. The panel is over lapping a couple of others so you want to free everything up so you can move the panel. It is pretty tightly held if this is the first time the screws have been removed. I started at the 10mm bolts and got that part free. The clips are just sandwiching the part in place. At the 10mm bolts there is a cut out that you can use for leverage. You should be able to pop out the bottom while leaving the clips in place. Once they are out move up to the torx style clips. You basically want to show the cover straight towards the other side of the car to get it out of the clip. It takes some strength, but if you use short fast accelerations, they came straight out of the clips for me. Here is a picture so you know what you are dealing with. The bottom of that picture is facing you on the outside of the wheel well. You are reusing all hardware so be careful. 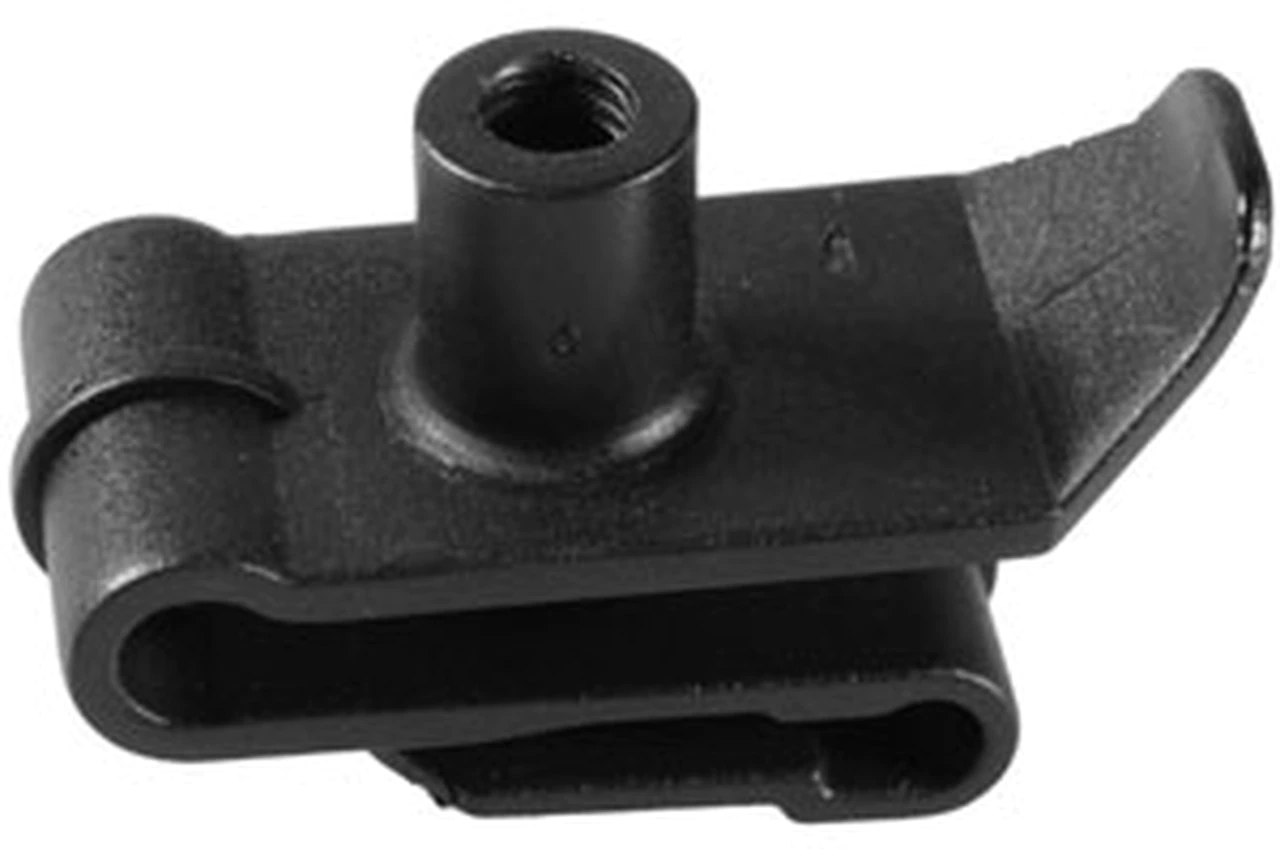 This was a little different between Driver and Passenger for me, but I may have been missing a piece on the Drivers side. The passenger side had a plastic shroud over it. It wasn't a major difference regardless.

So peel back the wheel well cover and you will see this. 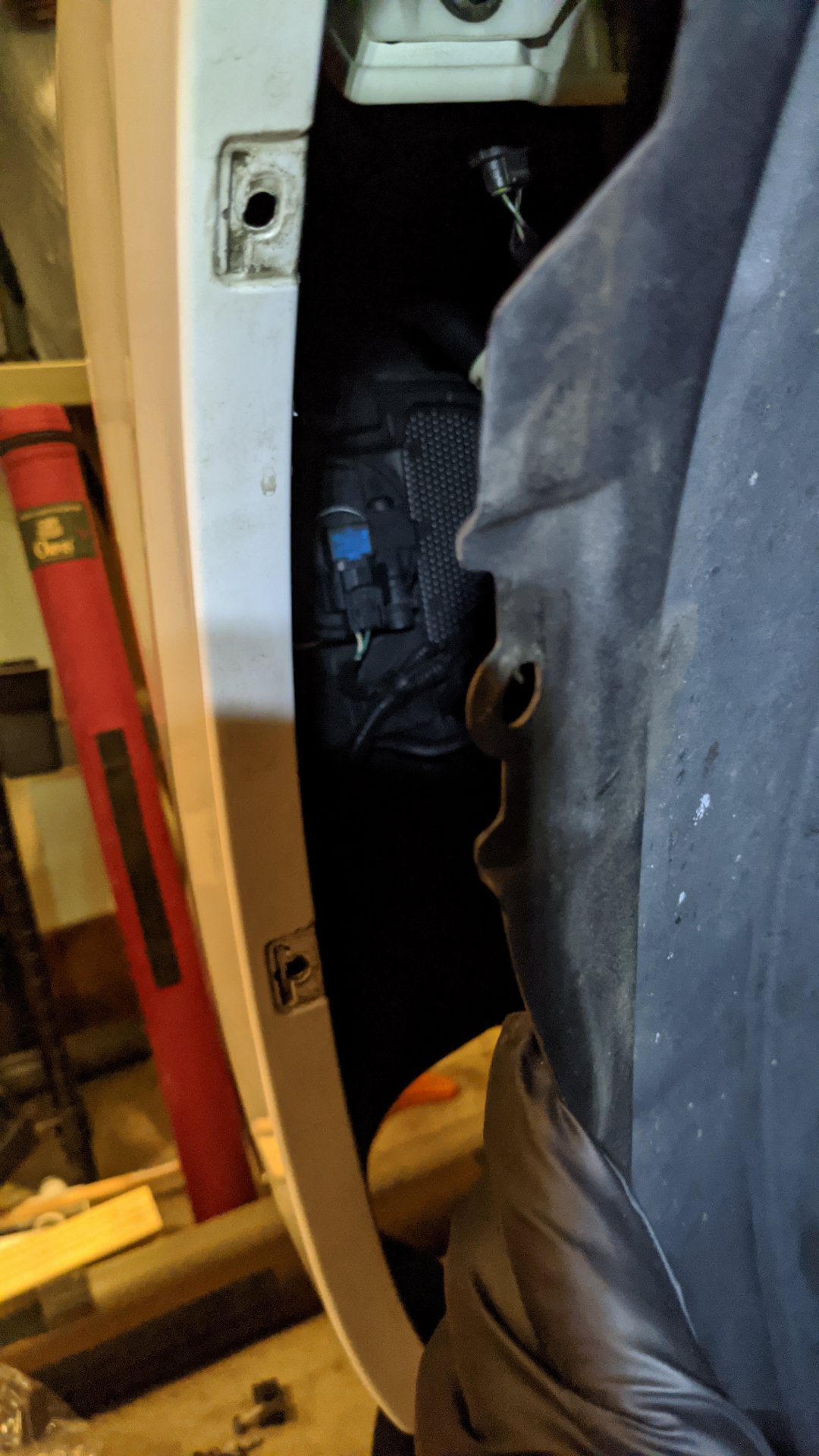 The blue dot is the fog light. It is just sitting there waiting to be replaced. YAY! 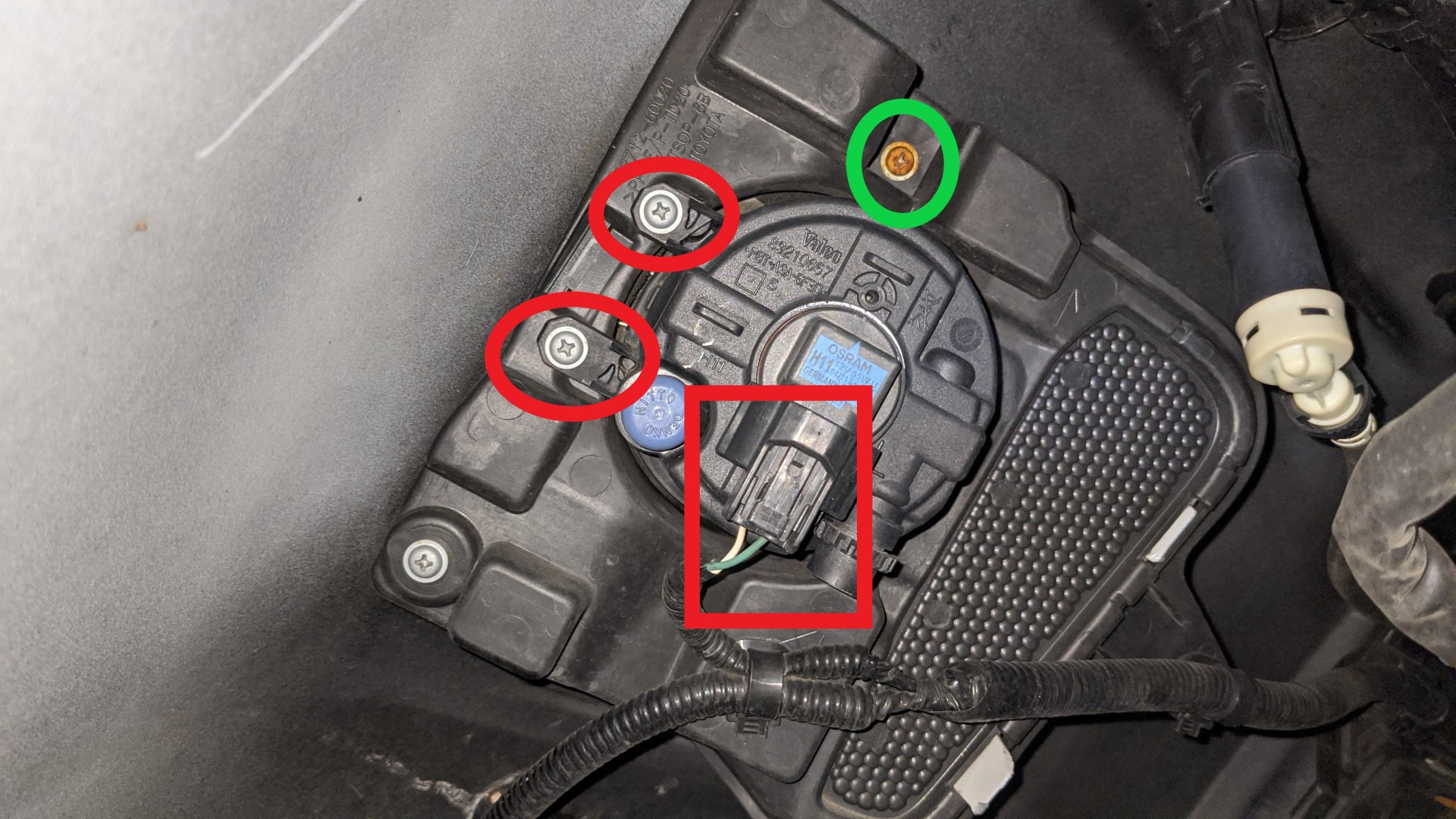 Remove the 2 phillips screws in red and unclip the power to the fog light in the red square and it should swing free. I unscrewed the green screw, but I don't think it was holding the fog light on. Either way they are super easy to deal with. The right side of the fog light is just lightly held by some clips that the housing rotates under.

I will add the bit about the Passenger shroud here in case you start on that side. 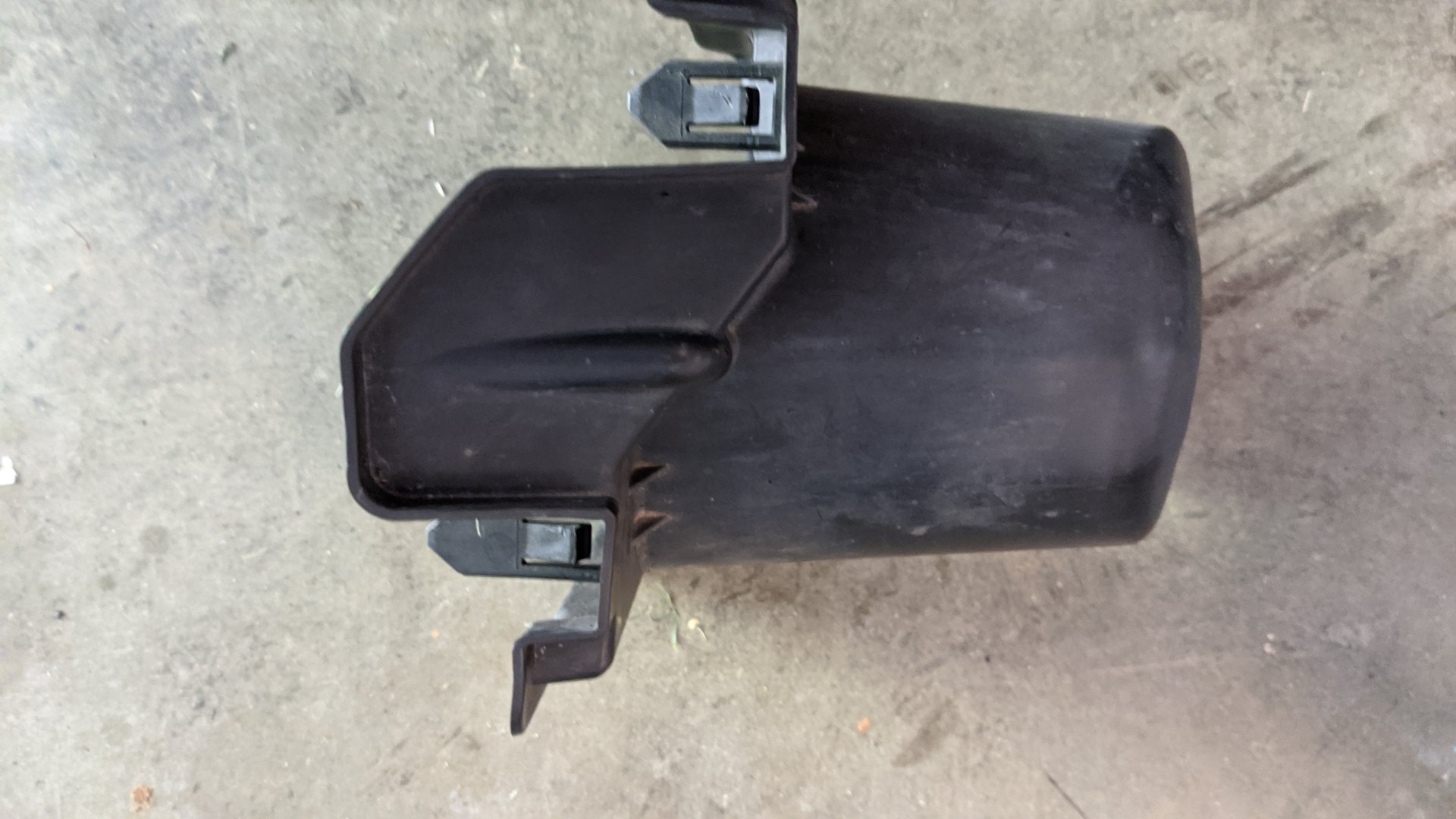 To get to the passenger side fog light screws you need to remove this shroud. It is held in place by the 2 clips you can see on the top of this picture and one on the bottom right as you are looking at it from the wheel well. Honestly I just kinda yanked it and it came off. It is pretty easy to find the clips though once you know what you are looking for.

That's it! Your fog lights are gone. 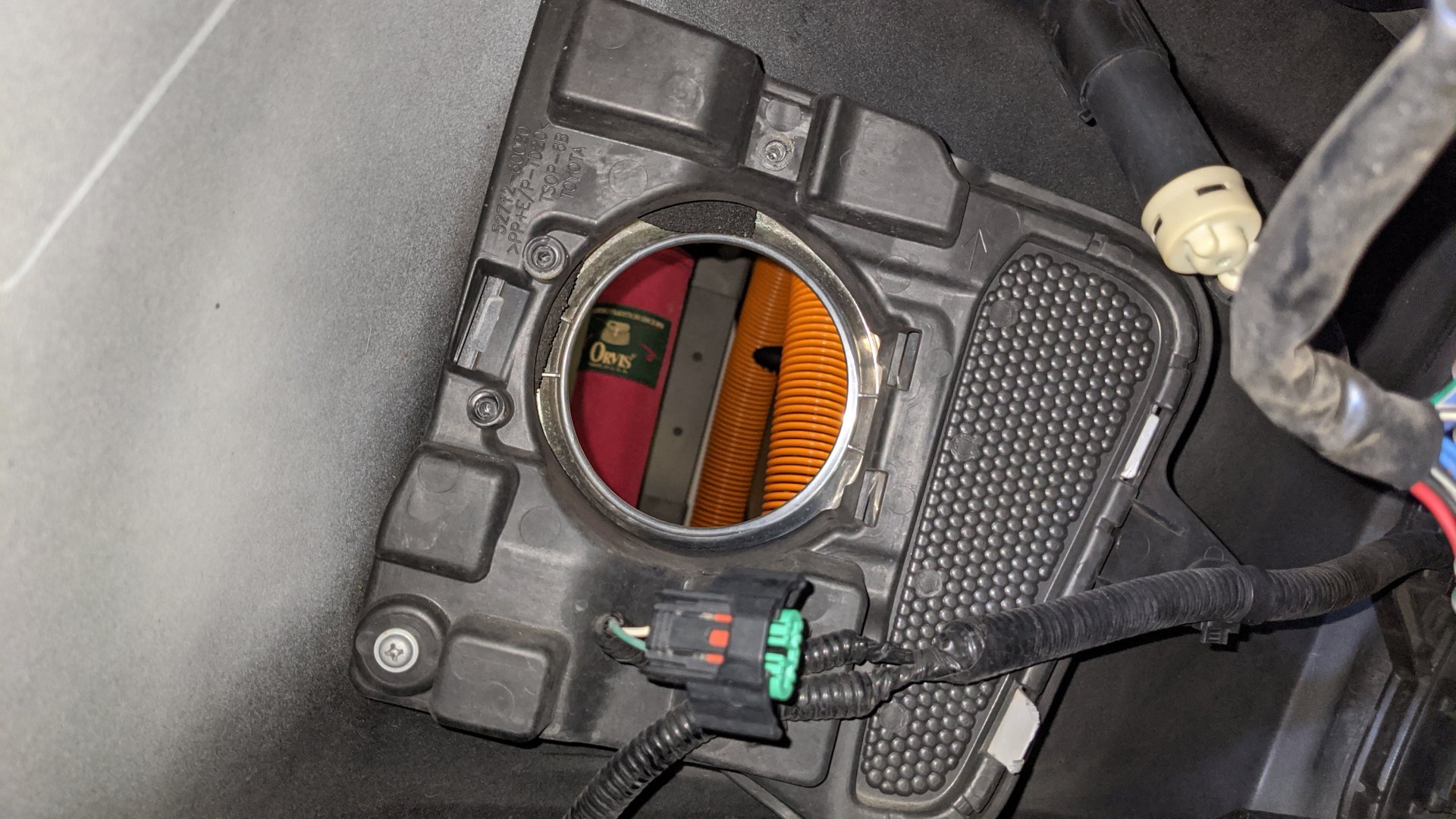 Here is the empty space if you need to estimate spacing or anything.

This is pretty specific to my Fog Lights which was dead simple. Can't say enough about how easy this was and how effective they are over stock equipment. In Love... 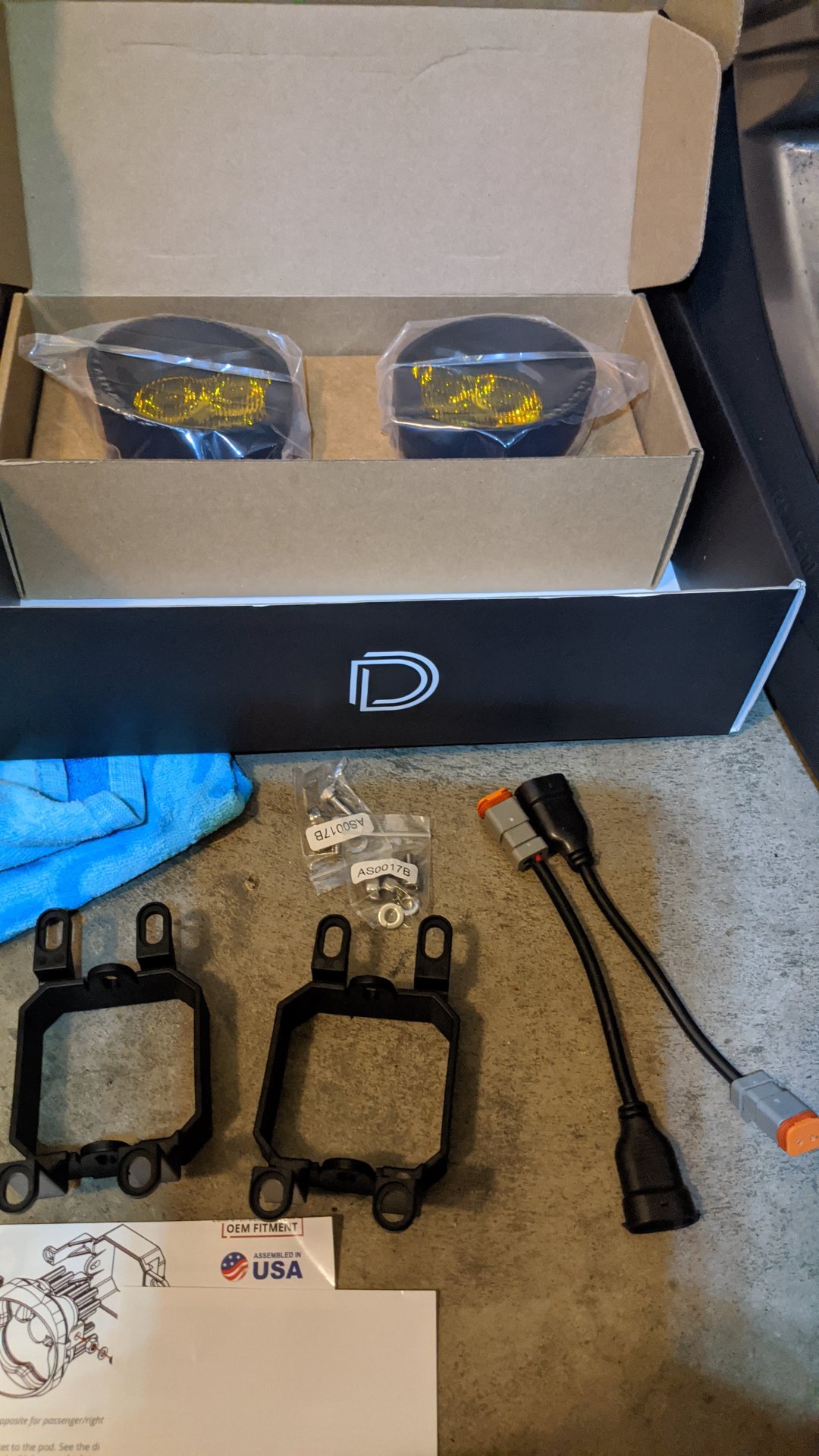 Here is what came in my box. Headlights, Mounting brackets, Screws, wiring harness. 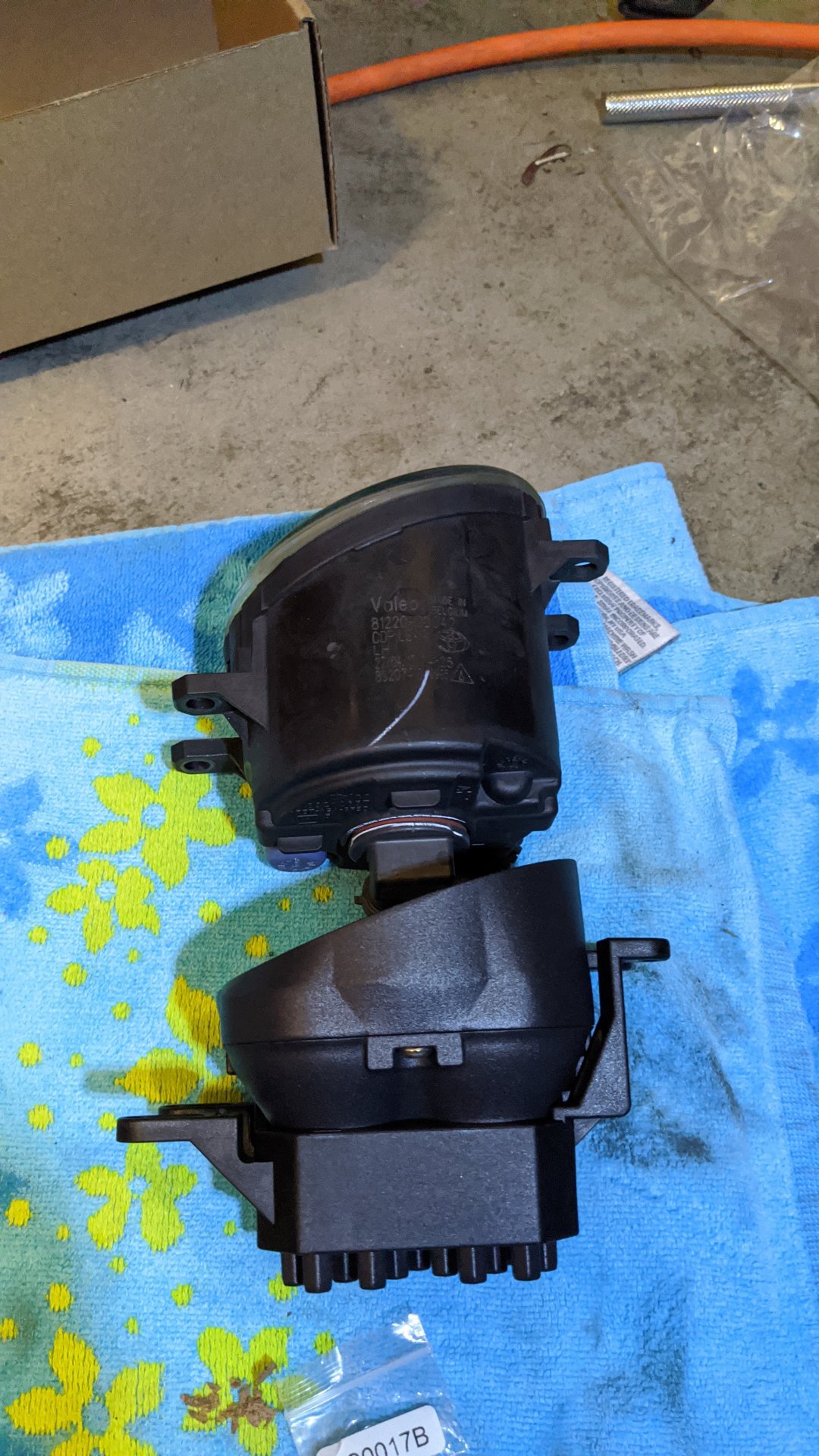 This is the only "tricky" part of the SS3 install. You just need to match the angle and height of the light and mounting bracket to the OEM equipment. Remember OEM plugs in from the bottom for frame of reference. Plug in the wiring harness into the back of the new light and then pug the other end into the car's wiring harness. It had a raised bump that clicked when it was seated. Pretty easy, plug n play. 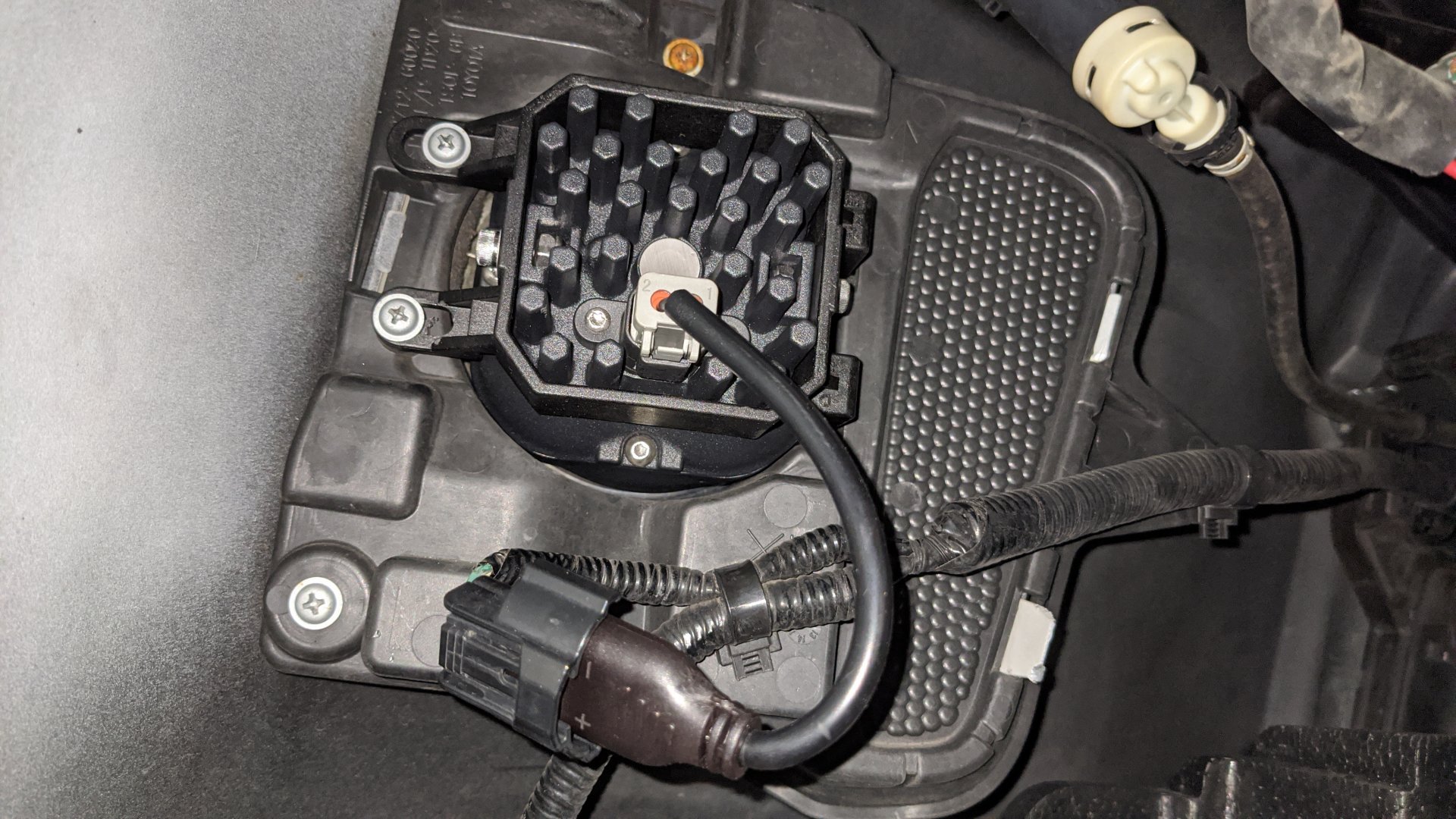 Closing up is just a reversal of Step 1, but go slow and don't force anything. Once the overlaps are all back in place, it should seat correctly and you can reinstall the screws. Feel free to ask for clarification. Good luck!

Tried searching the site but no results returned, only white fog light replacements and a bulb replacement. Looks great and would love to do this mod. Thanks for the great write up.

rick312 said:
Tried searching the site but no results returned, only white fog light replacements and a bulb replacement. Looks great and would love to do this mod. Thanks for the great write up.


Thanks for the kind words and Glad you found them!

They have a sport, pro, and max version I believe. The Pro is so bright I can't imagine needing anything more. I still love them.

Watch out when you install them. Mine are aimed little high and I literally watch as people coming the other way put their hand up to block the light. It's that bright, but makes driving at night a pleasure.

I have a GX 470, but I'll give a little plug here regarding light quality...Diode Dynamics lights are AWESOME!!! You can see an amazingly in depth comparison here.
I had DD SS3 yellow fogs on my Tacoma, which I just sold; so now I'm in the process of getting them on the GX.
They have tons of high quality adapters for all different applications (the kit I got for my Taco worked great)...but it's kinda hard to tell what works for your specific vehicle (unless I'm missing something).
I bought mine through Hotshot Offroad, because they're really active on the TacomaWorld forum. They're super helpful, so you could contact them to get exactly what you need to fit your rig.
Last edited: Feb 18, 2021
You must log in or register to reply here.