I'll start by saying that I was beyond impressed with the Explorer 1000. I looked at quite a bit of information before determining that Jackery was the brand of battery pack that I wanted to purchase. My original, and still my main purpose, is to power a 12v fridge while away from the house. The Explorer 2000 is overkill for that purpose.

If you live somewhere that regularly experiences power outages, or need to power your devices for extended periods of time, then you need a larger portable power station. Sure, you can get a traditional generator that will provide power in the event of a power outage or camping excursion. There are 2 drawbacks to consider. First is the noise. I've never seen (or heard) a quiet generator. They have gotten better over the years, but they all still produce some noise from the engine running. I absolutely HATE camping and hearing someone else's generator. The second major drawback is fuel, and that is sort of a cumulative drawback....it has to be available, it has to be affordable, it goes bad over time, and it releases toxic gases after combustion. Not to mention other mechanical issues. A combustion engine should really run periodically to stay lubricated and stay in working order. Gas reached over $4.50 per gallon last week where I live, and I've seen prices posted online closer to $10 in places like California.

All of those make for a fairly compelling argument for a "solar generator" (a.k.a. portable power station and solar panels). The Explorer 1000 is awesome. I don't have a single complaint with it, but I questioned how long it would last in a true emergency situation. As long as the sun is shining, the cost of gas is irrelevant.

When the power goes out, my main concern becomes keeping my cold food storage...well, cold. A household refrigerator can use a decent amount of power. Especially if it is opened and closed often, which you would try to minimize (obviously). A quick google search shows that the typical home fridge ranges from 300-800Watts when running. My side-by-side fridge looks to be on the higher end of that range, and I understand that could surge to double when the compressor kicks on. The Explorer 1000 can handle approx. 2000W surge, so starting a home fridge is no problem for it. However, 300-800W is going to run it down fairly quickly. What about charging it back up? It can take a full day to charge in less than ideal conditions (i.e. a cloudy day).

The initial charge on my Explorer 2000 was 22%. It took approximately 2 hours to charge to 97% with 6 200W panels. 2 of my panels were damaged in shipping, and I'm not sure they were doing me much good even though I had them hooked up. The readout on the display indicated that I was pulling in about 800W consistently. I think I saw it get up to 881W at one point, but I wasn't watching it consistently. This was on a day where there were virtually no clouds in the sky. I'm absolutely blown away at how quickly this thing charged! 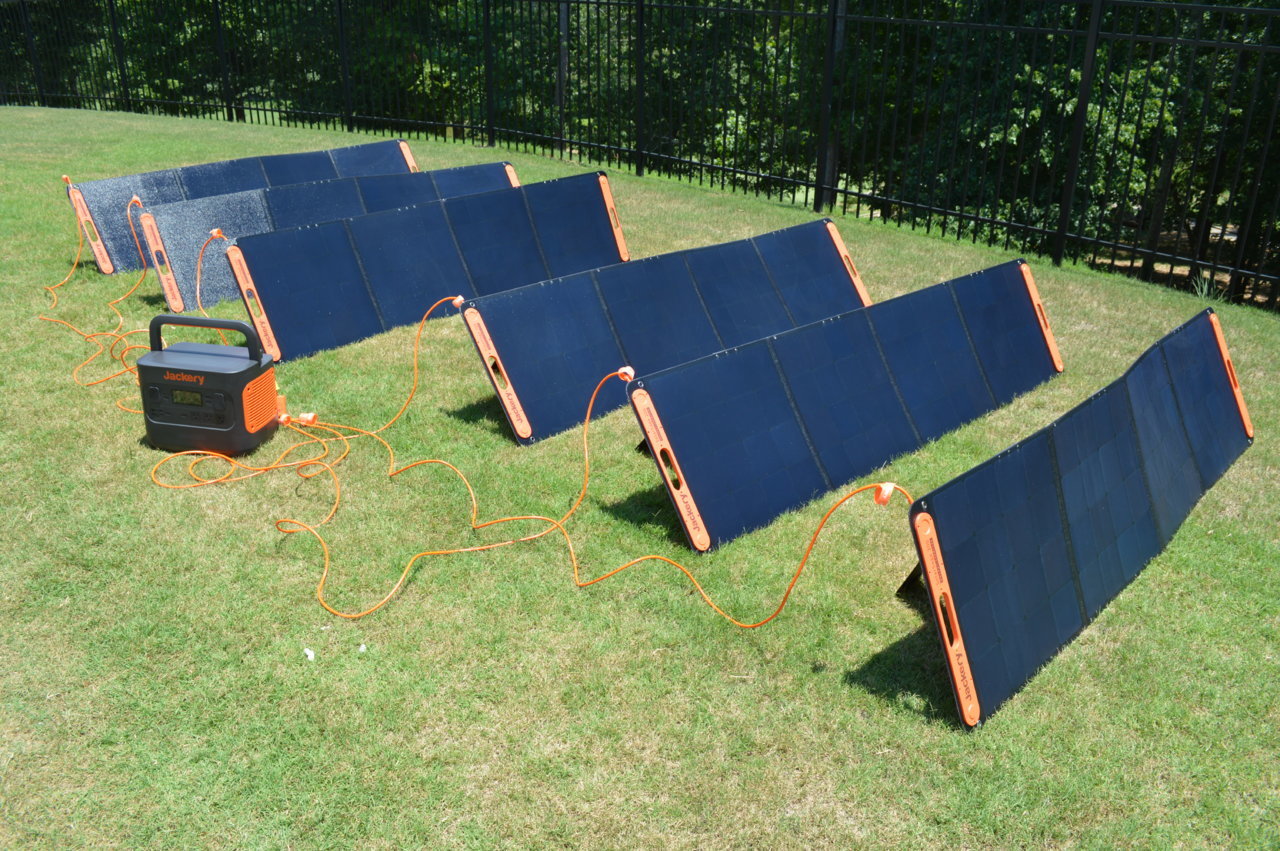 An input wattage reading is pretty standard on other Explorer models. The 2000 pro has an estimated time to charge indicator right below the input. That's a cool little feature and I found it to be pretty accurate.

Another major difference between the Explorer 1000 (and smaller units) and the 2000 Pro is where the charging ports are located. The 2000 charges from the rear, whereas the input on the 1500 and lower models is on the front. I also found that there is no longer an external charger "brick." The new unit takes a standard computer or monitor cable that plugs directly into it. Those are commonly available if you ever lose the charging cable. 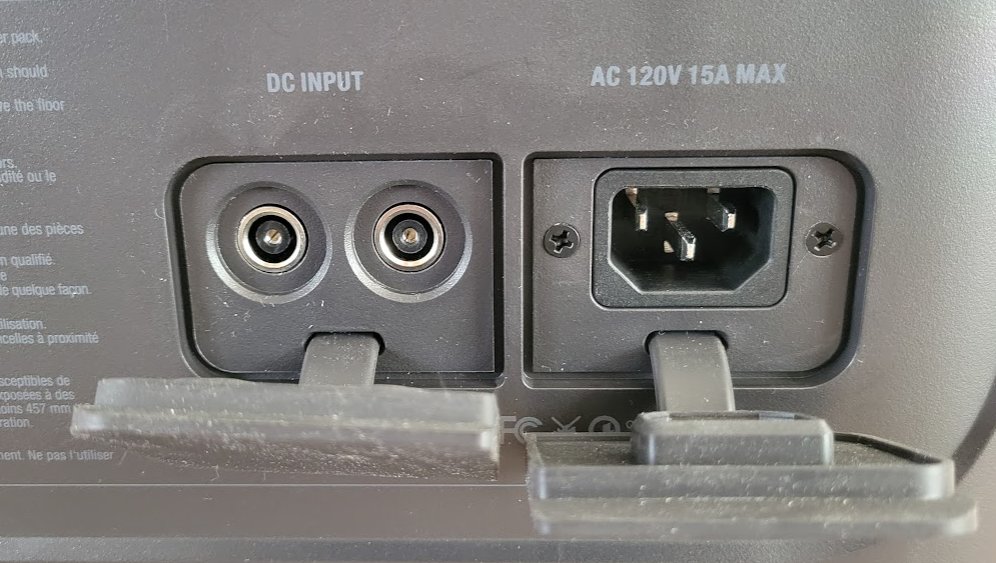 My next concern in an emergency situation is the temperature of the living space. You're typical emergency situation seems to happen when the weather is extreme. In my experience, either really hot or really cold. Heating and cooling living space can have a pretty high energy demand. According to a quick google search, a "portable" (i.e. window unit or stand-alone) AC can consume between 500W (small) and 1500W (large) with an average medium sized unit using around 900W. A small space heater fan typically consumes about 1500W. No worries there either.

So let's take the natural disaster situation out of the equation. I suspect people with campers who are off grid for a while are the more likely purchasers of an Explorer 2000 Pro. While it is the first Jackery that I've seen with a folding handle, it certainly isn't light. It's not going to easily fit on the floorboards of a Tacoma, but it could do nicely in a (covered) bed. So while it is techincally "portable", I don't want to lug it around very often. I certainly don't see my grandma, or even mom, picking this thing up. My grandpa probably would, but I don't really see him wanting to either.

Let's talk about output for a moment. 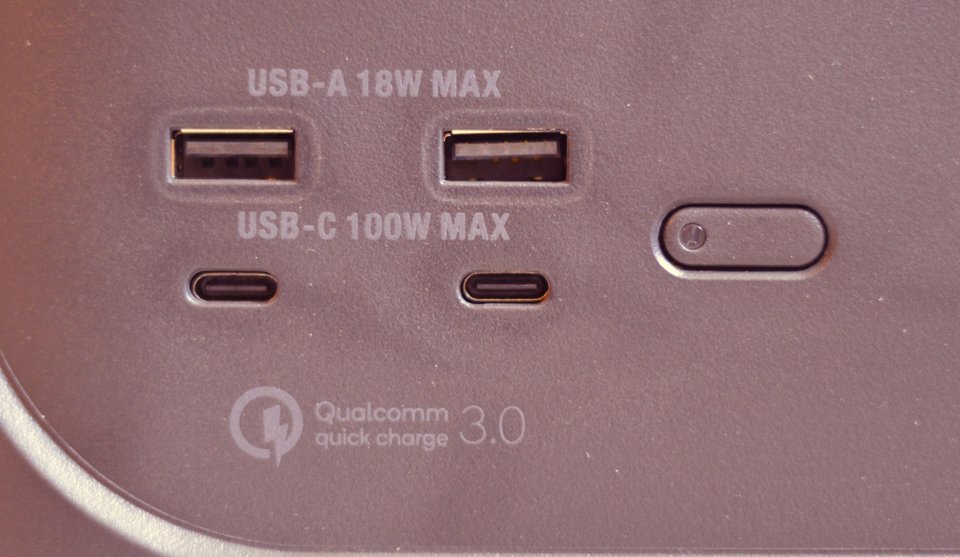 The DC 12V port is similar to previous models and is covered by a rubber protector on the right. 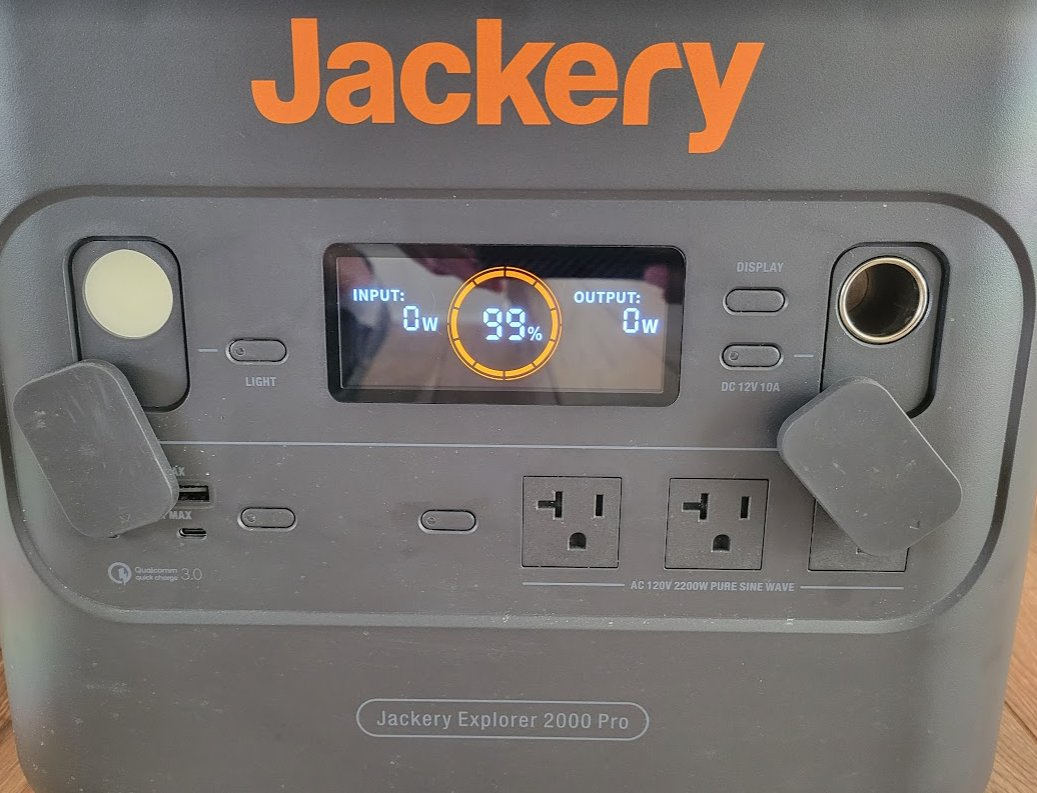 If you are out in the wild and need the flashlight, this one is considerably brighter than the one on the 1000. However, due to the weight, I wouldn't really carry this around for the purpose of having a light. Instead of a clear lense, it has an obscured covering to better scatter the light. I'm not sure the proper term, but it produces a smoother light (if that makes sense). There are multiple brightness settings and even an SOS feature....again, nice to have in an emergency.

The Explorer 2000 Pro will accept the 100W SolarSaga solar panels. Something to look out for: if you have an older 100W panel, it may not have the adapter on the end to connect it to the newer 8mm connector. I had a 100W panel replaced under warranty. The original one just had the standard 8mm connector on the end, but the replacement had an adapter with a sticker that stated it was for the Explorer 1500 and 2000. I'm sure it would be easy to get the adapter, but just something I noticed. Obviously, it will take longer to charge with a 100W panel, but you can hook up to 6 panels total with the included adapters that come with the 2000. 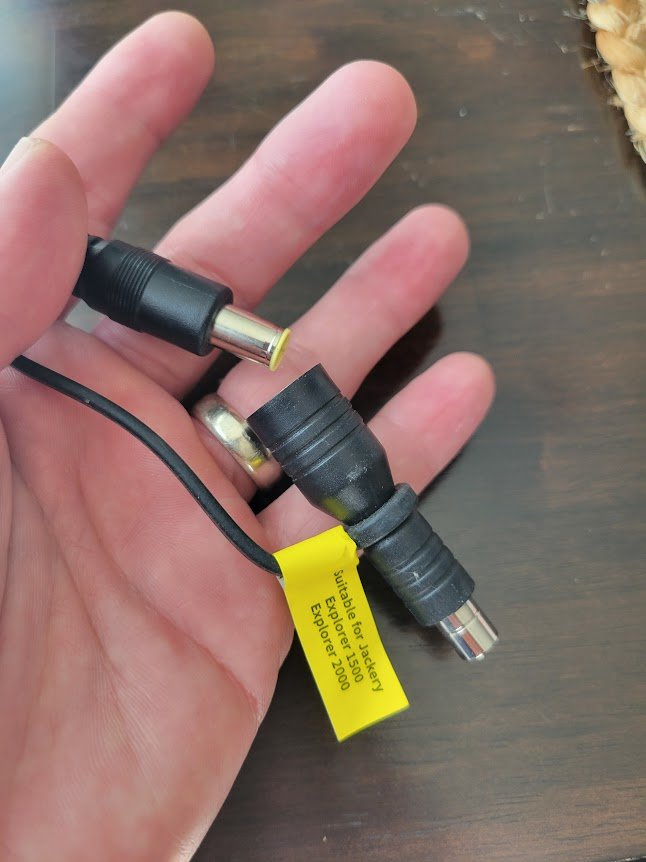 Another thing I noticed while charging is that an internal fan kicked on almost immediately. I'm not sure if that is standard due to the higher wattage of input, or if it is because it was a particularly hot day. I always try to put my Explorer models in the shade while charging. Even hiding them behind the panel will help keep it cool. Otherwise, they will get EXTREMELY hot when exposed to direct sunlight.

All those marketing campaigns and people on facebook/instagram/whatever other social media app that show pictures of them out in the open.....those are just for the pictures. I don't recommend doing it that way AT ALL. You'll kill your expensive purchase real fast. That's not to say that it can't handle it for a little while, but certainly not good practice.

Other differences that I noticed are in the panels. The 100W panels have a cloth backing and the charging cable is permanently attached. Not so with the new 200W panels. The edge of the panel is hard plastic and the charging cable plugs into a port on the side of the panel. I actually think both of these design changes are important and a step in the right direction. Remember when I said that I had a panel replaced under warranty? The cloth backing got stretched so tight that it was pulling away from the panel. I'm not sure if that was due to humidity or what, but it was certainly not due to misuse....at least, I don't think it was. Since there is no fabric on the new panels, they are less likely to constrict. Also, if the cable gets damaged, it can easily be switched for another.

Another difference between the 100W and 200W panels is the storage. The 100W has a magnetic closure and a zipper pouch physically attached. This is where the charging cable resides. The 200W still has magnetic closure, but comes in a zippered case that has an pouch to hold the removable cable. Given the design changes, the 200W is remarkably similar in size to the 100W panel when fully collapsed. It's when you unfold them that you can see the larger size of the 200W panel. The 200W panel is also significantly heavier than the 100W panel. 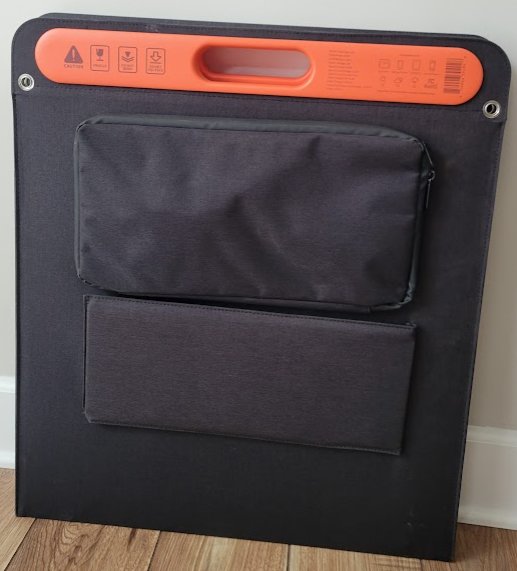 and a side-by-side showing the difference in how they fold up: 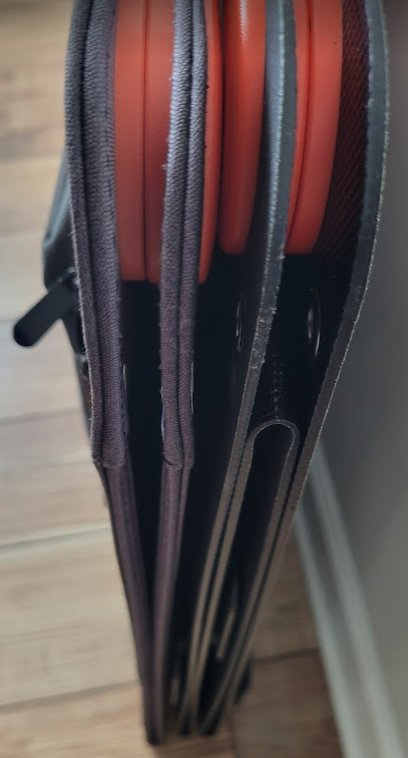 I hope this is useful for anyone who may be considering their options when looking at portable power stations. Any questions, please ask!

very thorough! And seems like quite a capable unit based on specs, both the max wattage and battery capacity are up there.

On a side note, one thing that I noticed when reading your post is your estimates of power used by house refrigerators. I suggest that you buy -if you don't have one already- a little wattmeter, and actually measure your fridge (didn't sound like you had). You may be pleasantly surprised if your fridge is not an ancient monster. I have a full-size side-by-side that is about 3 years old. On the lower end of cost, not particularly efficient. It uses about 100W when the compressor is running (1/3 of the time maybe), and 2 or 3W when it's not. Very rarely, and I've never actually seen that (I have a wattmeter on it full-time and I monitor it), if it defrosts it may go up to 300W or so per the manual. So 300-800W seems high to plan for with modern fridges. With my fridge at, say, 100W 1/3 of the time, 2160Wh might keep me going for a couple of days with no charging, depending on the unit efficiency. Not bad. Space cooling or heating, I would not care much about in a power outage, living in a temperate climate.

@e9999 , you are correct, I have not measured the usage of my fridge. It is a Whirlpool side by side that is about the same age (purchased new in 2019).

Something else to note on the solar panels: the 200W panel does not have the USB connection to charge a cell phone (or similar) directly like the 100W panels. However, you could just plug the phone into the Jackery Explorer that you are charging. So I don't see that being a deal killer.
You must log in or register to reply here.

How would you wire a system that used a switch panel (switch pro/auxbeam) but have a fuse/relay/rocker switch redundancy?