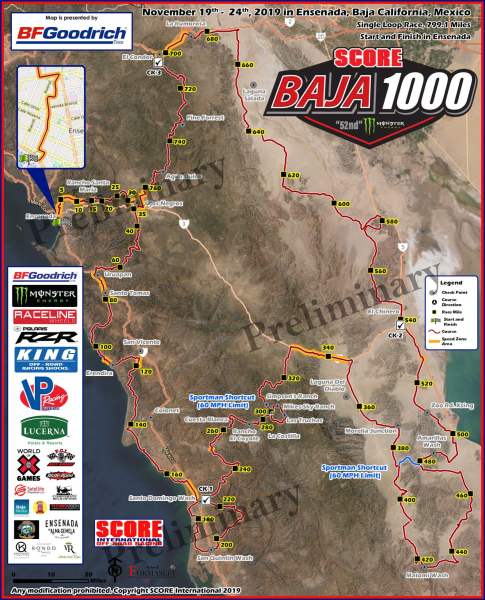 ENSENADA, BAJA CALIFORNIA, MEXICO, NOV. 15, 2019 — BFGoodrich® Tires is seeking its 31st overall win at the SCORE Baja 1000. The grueling race pushes the world’s best off-road drivers to their limits and tests equipment in a way no R&D laboratory could.

BFGoodrichhas won 95 SCORE Baja races during the past 40 years and will support a crowded field of contenders who will descend on Ensenada, the desert racing capital of the world, at the end of the month. The brand has a lot to celebrate at this year’s Baja 1000.

BFGoodrich Tires has been designated the title sponsor of the 2019 SCORE Baja 1000, a testament to the brand’s roots and commitment in the sport.

“For more than four decades the Baja Peninsula has been our real-world testing ground,” said Chris Baker, Motorsports Director for Michelin North America and BFGoodrich Tires. “To be the title sponsor of this race, especially on a year with so much action and an extremely competitive field, is significant.”

In addition to title sponsorship, BFGoodrich is offering a $40,000 contingency prize to the overall winner of the race if they are using BFGoodrich tires. That winner will have a lot to contend with in this year’s course – a rocky, technical 800.5 miles that will put drivers, vehicles and tires through a punishing test.

Defending Baja 1000 overall winner and BFGoodrich racer Cameron Steele will compete for a second consecutive Trophy Truck victory in a Team C Mason all-wheel drive trophy truck with Ricky Johnson. He will find tough competition in Ryan Arciero, who has the top starting position after an overall win on BFGoodrich tires at the SCORE Baja 400 in September. BFGoodrich veteran and four-time Baja 1000 winner Rob MacCachren is always a threat and will be joined by Justin ‘Bean’ Smith in this year’s race.

Eight well-known champions from other motorsports disciplines are racing in the Baja 1000 this year on BFGoodrich tires. This list includes:


“To see these internationally known names in motorsports testing their skills and endurance in the Baja 1000, and to see them choosing to use BFGoodrich tires, says a lot about the allure of this iconic race and the legacy of the BFGoodrich brand in this sport,” Baker said.

The recently revealed Ford Bronco R race truck, which made its debut in early November, will race in the Baja 1000, 50 years after desert racing legends Rod Hall and Larry Minor won the 1969 Baja 1000 in a Ford Bronco. The modern take on the Bronco will be driven by several notable drivers including Rod Hall’s granddaughter Shelby Hall, Cameron Steele, Jason Scherer, Steve Olliges, Brad Lovell and Curt Leduc. The Bronco R will race on 37-inch BFGoodrich® All-Terrain KDR2+® tires.

This year’s race also features a reimagining of the legendary “Baja Boot” raced in Baja by Steve McQueen and other desert racing pioneers in the 1960s. Scuderia Cameron Glickenhaus (SCG) will debut the 21st century interpretation of the iconic Boot in the Baja 1000. The unique vehicle can overcome the toughest off-road obstacles on the course but is also designed to be street legal. SCG selected 37-inch BFGoodrich® Baja T/A KR2® tires for the race.

The brand’s support and dedication to the Baja 1000 goes far beyond title sponsorship. Perhaps more famous than any partnerships or desert racing technology is the unparalleled support BFGoodrich provides for desert racers.

The BFGoodrich pit and radio relay network set up at every SCORE desert race, including this year’s Baja 1000, provides teams free support including fueling, vehicle welding, tire changes, mechanical repair and water. The only requirement teams need to have access to this support network is to race on BFGoodrich tires at all SCORE races. For this year’s race, six pits are strategically set up along the course to support race teams.