which truck to 13 BT...NOW, installing prep

I'm sure this will get a mixed bag of responses.....

I have two bone stock rigs, both in great shape and running. I bought a 13BT w/5 spd , PTO, and cable lockers to put in my 74V8j40. Problem is that I sold that truck before I received the diesel motor and bought this sweet 78fj40. So, do I put the 13BT and axles in the 78 california spec fj40 or the nearly pristine 66 FJ45? Neither truck will see heavy wheeling, but I do take the 40 out some to Tellico and Uhwarrie.

Both seem to be a crying shame to modify, but I'm also excited about the diesel and cable lockers.

Now, I won't start this project until the winter, so I have plenty of time to think it over. 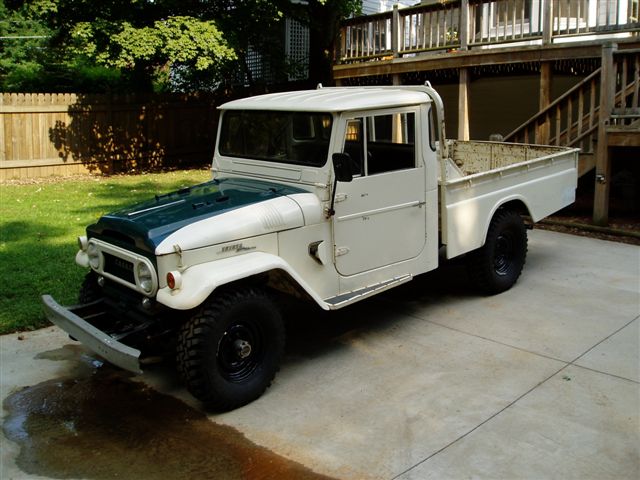 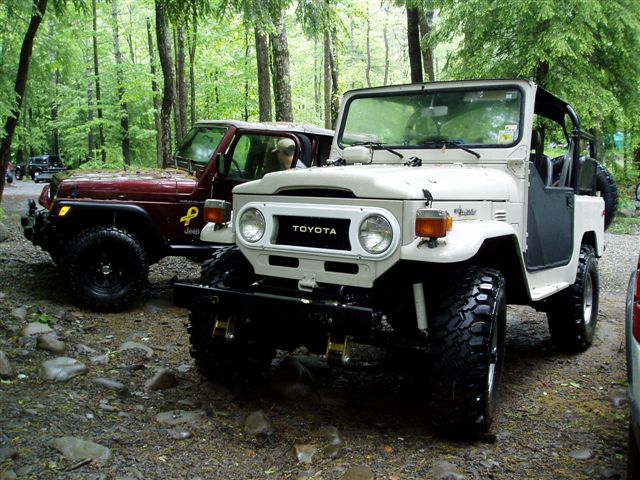 no brainer,
go with dieseling the 45, that will make it a pleasure to drive and much mor epracticle than the 40...
cheers

Would you split it up then and put the cable lockers in the 40 since it's lightly wheeled or just go ahead and take the 45 to the max?

there are soooo few nice stock 45's around. if it's as nice as the pics, just leave it.

put the diesel in what ever you will drive the most. ie: the 40

that's what i'd do. but what the hell do i know!

rutbeer said:
Would you split it up then and put the cable lockers in the 40 since it's lightly wheeled or just go ahead and take the 45 to the max?
Click to expand...

i would stick the entire drivetrain under the 45 since it will fetch the best dollar down the road.
i do agree with crusty though the 45 is a rare beast in really nice shape but the parts are getting harder and harder to find to rebuild the brakes and clutch and axles so if you will be needing to upgrade anyway might as well go with the best milage and once you go diesel you won't go back...
cheers

The true no-brainer was taking the piece of crap V8 out of the solid bodied 74....I have been truly wrestling with this since I sold it and realized what I had with the two stockers. The 78 has a valve guide leak, manifold leak, and the tranny doesn't shift nearly as smooth as the fj60 I had, but it starts every time, doesn't complain, doesn't dictate a motor removal, and holds it's value as it is. You don't even see that many solid stock 40 anymore either.

You are right that the 45 brakes suck....big pita. And as cool as the column shifter is, it certainly has it's limitations.....but it's a step back in time. I've never driven anything like it.

Honestly, if the conversion was done right and made to "look" factory, I think either would hold their value pretty well. 10 years down the road, maybe not, but now, probably. Regardless, I tend to do either conversion so that it could be "undone" in the future. Everything I ever do is bolt on modification so that if I change my mind, you won't know it was there. I fabricate brackets and what not, but try not to even drill holes.....I'm kind of weird that way.

Tough decision, prolly go with the one you are planning on driving the most.

Sounds like that would be the 40 and then pop in those cable locked axles, I assume they are out of a 7 series?

If so you get a little added width for stability.

Either truck will rock with that little brute of a power plant.

Guessing you have vacume s*** on the transfercase? If so you will have to loose it or notch the frame for either vehicle install.


Edit, also to mention split the tranny from the engine and make sure the pressure plate is not stuck to the flywheel if it has sat for some time in Japan outside. I learned this one the hard way after it was in the truck.

I think you are going to be happy what ever you do.

I'm pretty sure adding the 13BT will increase the value of either. The purists will cringe if it goes into the 45 but the market will pay more for the the rig with it in.

Being one who appreciates purists but modifies nearly everything I'd recommend putting the diesel in the 40 in spite of agreeing with most of what crushers said and the only reason is the wheeling. I'm sure you're going to take whatever rig gets the diesel further than you ever would previously for events etc. My GF and I think nothing of jumping in her 13BT powered 40 series for a thousand mile trip. The 13BT makes the wheeling even more fun once we get there. If that powerplant was in the 45 its inevitable that its going to see rock rash sooner than later. Its easier to avoid in the 40 and easier to fix.

I have to say, however, a 13BT in a 45 would be ultra cool. Rob got me thinking about the vac shifter... the 45 would have had it stock. Stratospheric super coolness would be achieved if you and 66LWB45 got together and figured out how to column shift an h55f.
T

Oh, to have this problem... Um, so where should I put my new 13BT and cable locking axles, in my good looking 40, or my minty 45? Golly, whatever should I do?

If it were me I'd put it in the 45, but it would prolly be the smart choice to transplant into the one likely used the most.

Not sure if this picture shows how close the tranny is to the frame, but its close. 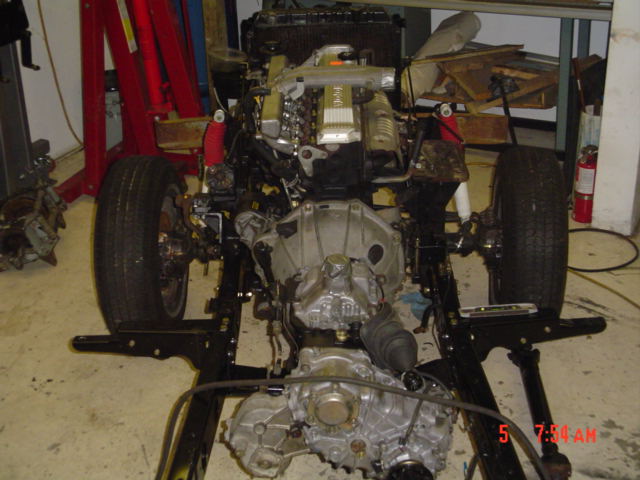 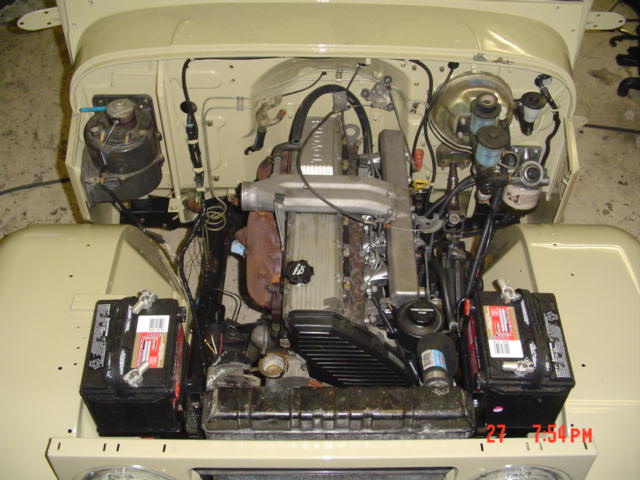 Is that the 6 cylinder? It is not a 13BT I have that figurd out.

canadian bum said:
Is that the 6 cylinder? It is not a 13BT I have that figurd out.
Click to expand...

So you can see how much room there would be with a 13BT.

Forgo the battery tray on the passenger side as it did not allow enough room with the 1HZ for a factory type air cleaner.

With the 13BT, (which I am not familiar with) the air cleaner turns a 90 degree elbow and down. Might be a good fit even with the battery tray.

I think that the 13 BT will fit fine. I wonder how much room you would have with a 1HD T. Yours doesn't look to bad.

the 40/42 series did come with a vacumm t/case and you could move the tranny mount over an inch or more to clear the vacumm OR you could buy the front half of a manual t/case and r&r that part in for a very clean install.
these are just a suggestion of course...

Radd Cruisers said:
You got it Pontiac......

So you can see how much room there would be with a 13BT.

Forgo the battery tray on the passenger side as it did not allow enough room with the 1HZ for a factory type air cleaner.

With the 13BT, (which I am not familiar with) the air cleaner turns a 90 degree elbow and down. Might be a good fit even with the battery tray.

Rob ,where did you finally put the vac canister for the brake booster.

Rutbeer ,they are both gonna end up diesls,so whats it matter which is 1st

I have a simular question. I just picked up a short box 64' FJ45, it is minus the original F motor and comes with a Chevy V8, drivetrain and dana rear axle as well as the original. I am thinking about putting in the drivetrain from one of my 70 series that I just parted out. the usually 3B, H55F. So my question is this, should I stick with the 3B or think about something more like a 1HD-T or maybe (dare I say it) a Cummins 4B.


On another note might be useful for some of you out there. SOR it going to start selling half cut of 40's and 45's with Diesel engines. Currently they do half cuts with 60's and 80's but there is a demand for the 4x series.

Funny you should mention dieseling both. I also have a 1HZ w/5spd, but my current plan is to sell that one and just stick with the 4 banger turbo.

I have also thought about the vacuum shifting transfer in the 45, and without actually looking at it, I bet you could hook up a mechanism to retain it. The split case vacuum unit is said to be too wide, but I bet you could rig something up to combine the two. I've heard people talk about tweaking a column shifter to work a 4spd, but talk is all it was....I have yet to see a pic.

crushers said:
the 40/42 series did come with a vacumm t/case and you could move the tranny mount over an inch or more to clear the vacumm OR you could buy the front half of a manual t/case and r&r that part in for a very clean install.
these are just a suggestion of course...
Click to expand...

You would need more like 3 inches over on the frame, I could not make it fit without cutting into the frame.

You made me go crawl under it with my good cloths on(actually I had to know).

Exactly 1.25inches of space on PTO side, with less than 1 inch on vacume side.

Maybe the older style transfercase was physically a tad smaller or the vacume setup was different.

So as for a newer split case assembly it would not fit.

Rob
You must log in or register to reply here.