Which Series for Baja?

I'm getting too old for my ex-USArmy Jeep CJ5. I need more room for family, more comfort for a long trip I'm making soon around the back roads of Baja, and something I can sleep in if I must. So I am in the market for a Land Cruiser. I'm told by some Baja enthusiasts, that for what I am going to do a 1980-87 manual FJ60 is the best, with the auto FJ62 a close second. However, in my search I am finding few of these vehicles and a lot of 91-93 models.

Is it right to be sticking with the FJ60/62 for a vehicle that is worth putting money into and will be servicable for a long time to come? Or do other later models have their plusses?

If I should post this in another section of the forum please tell me.

a 60/62 is a model that if you take good care of it, it can last you for ever1!!!! no matter what you can do with it. it can take u any where just like every land cruiser.

Second, bunches of info in these forums on your questions. Doing some simple searches will reveal lots of info.

Help narrow down the model for best fit.

And somewhere there is a best fit for your needs. Best of luck, all Cruisers are fun !!!

Location
outside if possible

I drove to San Carlos in our 62 w/5 spd tranny(16 hrs.) and absolutly loved it! the seats give enough room to spread out on long hauls. I owned an 1992 80 and drove it on some long hauls and ended up cramped and uncomfortable + the milage was worse due to the fact that the rigs heavier than a 62. 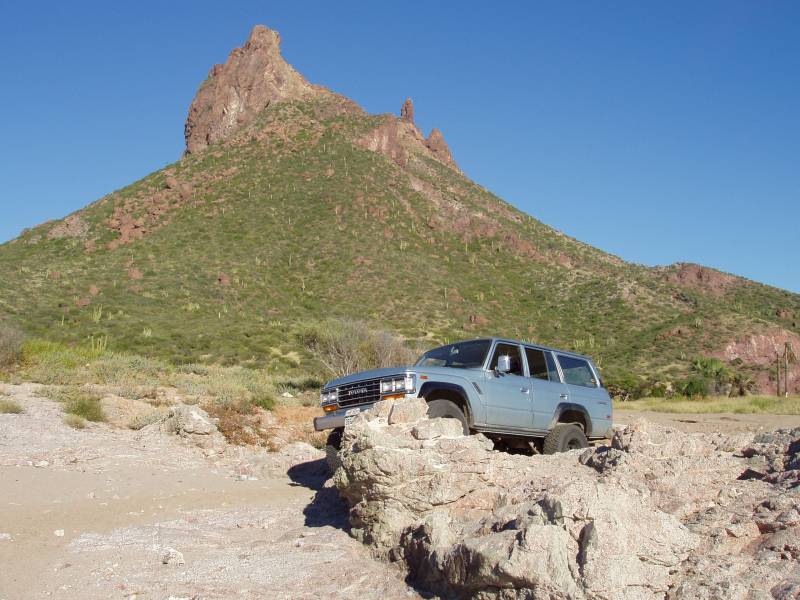 A 60 series will give you more interior room, as noted above- but the 80 is a better hardcore wheeler, especially if you get one with lockers.

However, you could buy two decent 60's for the price of one nice locked 80 series currently.

I would think that for just a Baja trip that the carburetted 60 series would best be able to handle the sometimes iffy quality of the Pemex gasoline you'll be buying. The injected trucks - 62s and 80s - are much pickier about what you run through them. Whatever you decide upon, Baja will be great fun - have a good time!

Welcome to MUD. You Heep is a M38-A1? Nice little trucks. I have a CJ2A and love it for trail running, but it's a towable vehicle.

I was having the same dilemma as you. Wanted a cruiser but unsure what to buy. My first cruiser was an FJ40, and had a lot of respect for the durability and low end power of the F series engines. But, like you, I needed more room.

I opted for simplicity and toughness... and bought an FJ60. I have put quite a few backcountry miles on her, and never had a failure. The truck now has 167,000 miles. I use it for camping, fishing, bird hunting and I fool with it doing maintenance.

An FJ60 can be bought for as little as $2500 or as much as $10,000 plus. Generally I would recommend that you get a basically stock truck with low miles (under 130K), and no rust. The cost varies by area. In the West, they tend to bring a little more because they are usually rust free, and offer more utility to a user in the Western states.

Some upgrades are desireable - good suspension, 5 speed transmission, tires, lockers. For your intended use, I would avoid V8 swaps (soemtimes done poorly) and highly tricked out trucks. They are often very good in the rocks, but marginal on the highway.

Thanks for many constructive and interesting replies. You guys are sure knowlegable and largely confirm what I had been told that I need a basic, all manual close to stock FJ60. Getting one under 130K miles that can be juged as a genuine 130K is going to be real difficult for me here (Temecula, California) and the prices you guys quote seem unreal compared to what I have been seeing. Here 91-93 which I guess are 80 series are much CHEAPER than the FJ60'. The typical FJ60 with 200k miles is advertised at around $7000-$8000.

I'm a good mechanic, done everything myself all my life, which means I've done everything, so a basic unit with sound frame and body for restoration would be ideal. TLC in Van Nuys has fully restored FJ60's starting at $52,000 and going up to $78,000! Southern Californai!

Regards and thanks again
Mike Stevens

Regarding Mexico (and I assume Baja), I have been told that Toyotas are not so well represented. So maintenance support might be a problem. I would go to some of the Baja specific sites and query there as to what vehicles are popular down there. Now, if the Toyota makes the cut, I would stick to the FJ60's as there are no computers/auto trannies to diagnos/repair in a break down situation (I believe all '80s are fuel injected/auto tranny rigs). Though I have heard that the computer chips are reliable, I would hate to be down there when something goes south (no pun intended) and you need the assistance of the local shade tree mechanics!

By the way, what time frame where you thinking of your baja adventure? I have been planning a trip to central america (now scheduled for fall of '06) with a leg through Baja. You also might want to check out www.sandcruiser.com and http://www.balum.com/ as both of those two guys have extensive info/knowledge on expedition vehicle set up and Baja.

I had a water pump go out on me near Mulege in Baja. Took a few days to get the part trucked down from Tijuana but that just meant more days on the beach. As stated on this thread, stick to the simplistic mechanics of the FJ60 and most probs can be overcome should you ever have any failures on the road. Good luck!

The FJ60 seems to be the truck of choice for people making long trips on poor roads.

If you are mechanically capable you will be WAY ahead, and will find the FJ60 really easy to work on. No computers, no injection, just a crude smog set up that works pretty well. I modified my 60 for the kind of traveling that I beleive you want to do, and it really serves me well all over the Western States.

TLC in Van Nuys has some nice restored trucks. For sale at extreme prices. I alsways wonder who buys them.

I am going to differ a bit here from the norm... You will be hard pressed finding a rust free cruiser. I think there is an acceptable level of rust that most people can deal with. Surface rust on the frame, if taken care of, is not the end of the world. Same for some bubbling on the body. What you want to avoid is any sign of signifcant rot, too much bondo and foam used as body filler.

And, there will be leaks under it. This is normal IMHO and expected. It is mostly up to the new owner to make it leak free if he/she wants. That is what mine did and that is one of the reasons I got the truck.

So, my truck has some surface rust on the frame that I will hit with a wirewheel, then Eastwood Rust Emulsifier (sp)... Then some Chassis Black paint of theirs as well. As for the budy rust? I grind it out, hit it with some Rustolium or like product. To deal with the wheelwells - a common rust area - I just bedlined the truck:

This truck has 34" M/T on it, ARB lockers front and rear and will travel at 65 - 70mph with little effort. For better gas mileage I would go 60ish but that is all personal preference.

This truck will take me from CO to Baja someday... It is my dream. First I have to move to CO though...

So my long winded point is... Don't hold out for something totally rust free unless you have $10k to pull the trigger when you want to...

OK. So the prices I have seen are reasonable? I would not want to say no just because I thought it was too expensive when it wasn't.

I'll post if I find anything interesting. My old Jeep should raise enought to pay for a Cruiser so price is not too critical. Just want to get the right model that will keep running and will respond to love and care.

Less than 130K miles will take some time to find. Unless your planning putting another 130K on it soon, I wouldn't let mileage bother me much. Most of us are rolling around in rigs with 150K- 250K on them. 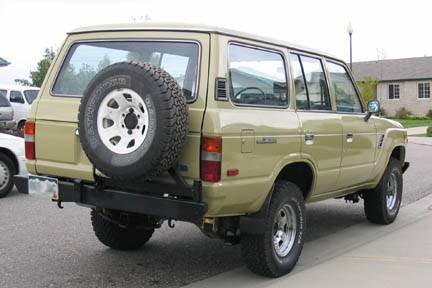 yeah these trucks will go forever, if you get a high mileage one be sure to re-build the front axle before you go.

It is my opinion that you can build a better and cheaper Baja rig by starting with a locked 80 than a 60 or 62. Based on the assumptions listed here:

At this point you have $100 bucks less in a carburated truck with way less horsepower, rougher ride, less articulation, more noise, etc, etc, etc... Don't even think about an engine or tranny or gear swap.

I have managed OK without any of this stuff. The two mods I would consider DESIREABLE (not essential) on a 60 are OME/Dakar suspension and an H55F. These will cost about $1500 and $ 2000 respectively (not installed). So, you buy a $5000 to $6000 truck, spend another $3500 and you have a tough, simple, go anywhere vehicle. The FZJ80 is a very nice truck, but you could spend similar $ fooling wiith it, and you won't find a clean one for much under $10,000. So the cost will be sorta similar, the result will be different.

Frankly, I can afford either, and chose the 60 for the above reasons, plus lighter weight and the 'cool factor' (priceless).

Live to Ski said:
Regarding Mexico (and I assume Baja), I have been told that Toyotas are not so well represented. So maintenance support might be a problem. I would go to some of the Baja specific sites and query there as to what vehicles are popular down there. Now, if the Toyota makes the cut, I would stick to the FJ60's as there are no computers/auto trannies to diagnos/repair in a break down situation (I believe all '80s are fuel injected/auto tranny rigs). Though I have heard that the computer chips are reliable, I would hate to be down there when something goes south (no pun intended) and you need the assistance of the local shade tree mechanics!

By the way, what time frame where you thinking of your baja adventure? I have been planning a trip to central america (now scheduled for fall of '06) with a leg through Baja. You also might want to check out www.sandcruiser.com and http://www.balum.com/ as both of those two guys have extensive info/knowledge on expedition vehicle set up and Baja.
Click to expand...

There is some truth to this statement but if you are doing regular maintenance on the truck, know how to fix it, and take a reasonable supply of spare parts you shouldn't have a problem. I wouldn't be buying the truck today and leaving tomorrow for your Baja adventure though.
Mexican's like Toyota's as much as we do so there are Toyota's there though mostly pickups. There was no Official Toyota dealer network or parts distribution system and the one now is still basically for official imports.
You must log in or register to reply here.
Share:
Facebook Twitter Reddit Pinterest Tumblr WhatsApp Email Link

Which one would you keep?
2

Does anyone know which non-OME shocks will work with the OME heavy lift?

S
Which differential do I have?
2