hey,at 40-60 k`s my right front tyre area has a noring slight grinding sound,doesnt happen b4 that speed and if i go faster it goes away,,rotated my wheels and my right has that noring sound and left bearly nothing,(right is way more noticable than left)
looked at brakes and cover thing 4 rubbing etc,trying to cover all angle b4 thinkng its cv or bearing..

no matter what gear im in its there at that speed..

its there when coasting in nuetral as well..(at that speed)

and what size is that nut over the bearing on the front,looks 50+..

ok,just went 4 a little drive and noise still there on and off,then on way home my brakes went... pedal went to the floor when used,then went back to normal pressure when i pumped them,then when i went to use them again ,straight to the floor again,

could this have something to do with my noise or something different??

red lines is maybe the bearing or the pins that lock it in place,it has exploded,,

green crosses is what i can move if i pull on it,

maybe nut has loosened itself or bearing has gone boom!.. 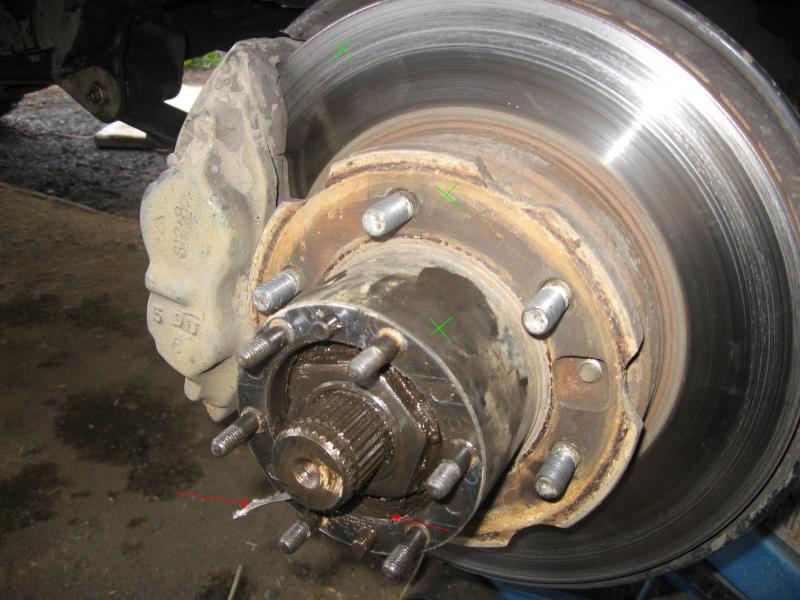 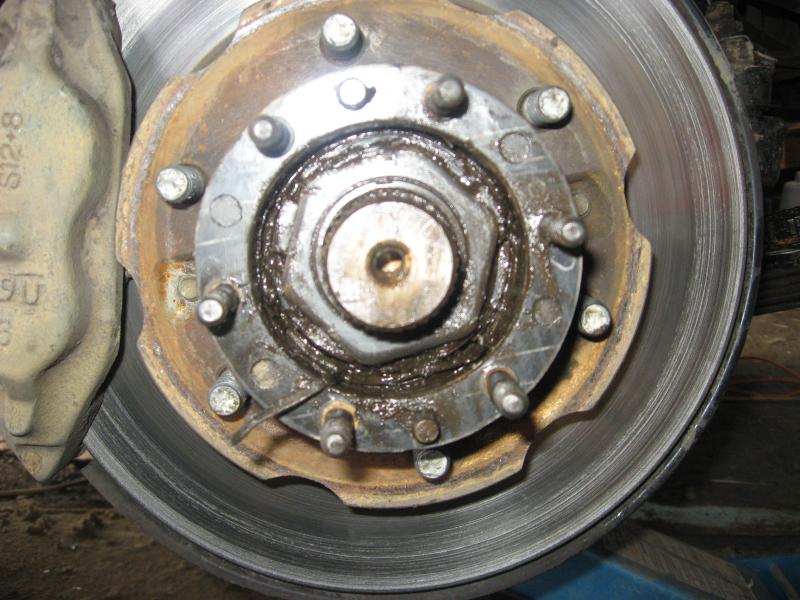 Your wheel bearings are knackered there Crelok! (And judging from that piece of metal hanging out - the outer bearing has completely collapsed.)

Sorry to say ...I think you're likely to have to replace not only the bearings but the stub axle too.

And since that wheel is so bad, you really need to dismantle/check/repair the other three as well.

PS. Wheel bearings need to be set up properly so be careful or else you may damage your new ones.

thanx lost marb`s 4 reply, i wanted to know 4 sure what im up against,
is that nut a 54mm,?? and how will i tell if that stub is cooked,thread knackered? or what??

Crelok said:
thanx lost marb`s 4 reply, i wanted to know 4 sure what im up against,
is that nut a 54mm,?? and how will i tell if that stub is cooked,thread knackered? or what??
Click to expand...


I think 54mm is correct but in a quick search of my garage I couldn't find my socket to make certain. (But my brief research now backs 54mm)

In a good "free-floating wheel bearing assembly" (like the one you have pictured ....except yours isn't "good" LOL) .... the outer races of each bearing are a light press-fit in the hub while the inner races are a sliding fit on the stub-axle. And the hub is able to spin freely on the stub axle with that movement being accomplished by ball-bearings rolling around (inside the races) while the individual races stay stationery with respect to the surfaces they fit against. (If you can follow this laborious explanation.

But when a bearing assembly becomes severely worn/damaged like yours appears to be .... the ball bearings jam and force one race (usually the inner one that is a sliding fit on the stub-axle) ... to spin when it shouldn't.

And as it spins it will wear a groove on the stub axle.

The outer bearing is the worst culprit for this damage and it will tend to leave a wear-groove on the underneath-side of the stub-axle.

When this groove is at all "significant" ...the stub axle must be replaced as well as the bearings.

PS. My rear axles are fully-floating (like your front ones are) .... so none of my vehicles weight at all is supported by my driving/spinning axles.

But I'm guessing you probably don't have a fully-floating rear axle. In this case ...the explanation for your rear wheelbearings is a bit different and is best left to others (if you need it) who have the experience working on them.
Last edited: May 29, 2010

thanx for that awesome response marbles!!

my brakes were starting to bang at my foot pedal b4 i stationed my 60,i guess it was the disk leaping in and out with the brakes going with it??

Generally speaking, mud is not a very good lubricant.

Better have look at the brake issue, sounds like you have another separate problem there. Check your master cylinder for leakdown, as that would explain the pedal sinking to the floor.

I agree with John's comments above.

And when setting up each new wheelbearing assembly make sure you avoid over-tensioning them. IMO you really need to have your brakes off (so there is no brake-drag on your discs/drum as you spin each wheel and check for bearing-play) but do have your wheel fitted so that you can easily "rock" the wheel (with a hand on both the top and bottom of the hanging tyre) to check for bearing-play. Then lock the adjusting nuts (using a new locking tab-washer) when you have only-just eliminated "play". But be careful because bringing the outer-nut down on the inner-nut usually alters the free-play/tension by itself. (In other words ... it is a "skilled operation".)

I personally ignore the stuff in the FSM on "bearing preload". (In other words ... I don't intentionally create any resistance-to-turn in the wheelbearings.)

lostmarbles said:
I personally ignore the stuff in the FSM on "bearing preload". (In other words ... I don't intentionally create any resistance-to-turn in the wheelbearings.)
Click to expand...


I tried not preloading and had them set-up nicely, so i thought. 10 kms to the inspection shop and there was a little bit of play (but hardly noticeable). Inspecting mechanic sent me home to do it properly with preloading, backing off, and then loading with scale according to the FSM. Back to the shop and he said they were perfect. I presume the FSM calls for preloading for a reason.

canucksafari said:
I tried not preloading and had them set-up nicely, so i thought. 10 kms to the inspection shop and there was a little bit of play (but hardly noticeable). Inspecting mechanic sent me home to do it properly with preloading, backing off, and then loading with scale according to the FSM. Back to the shop and he said they were perfect. I presume the FSM calls for preloading for a reason.
Click to expand...


The FSM does indeed call for preloading John.

But personally I think you did it right the first time and your mechanic later got you to do harm to your vehicle.

Can I suggest you recheck your wheelbearings in 80,000kms time! (It takes quite a while for the damage to occur.)

In that time you'll probably find they're all overheated/stuffed! I found this myself and was sooooo annoyed because it damaged some of my axles too! (And "yes" I do believe I set my preload accurately. And "no" I don't believe I overpacked my bearings with grease!)

I told this story to a "mechanic" (actually he was not only highly qualified but a "trades-lecturer" too) and he replied something like "80,000kms! What do you expect? That's a good life!".

So I don't have a great deal of respect for "mechanics in general". (I only have repect for those with hands-on knowledge relating specifically to my vehicle.)

The truth is that 40-series wheelbearings are so big and tough that they should last foreever! (Provided they're set-up correctly and not allowed to get full of mud/grit.)

This is one of the rare occasions when I disagree with the FSM.

But I don't want to pursue this aspect anymore (because arguing against "FSM best-practice" is futile and timeconsuming).

I'll be back in there before 80,000 kms go by. I usually open them up a few times per year to check for water and other contamination or to repack them. Also, I won't be be doing the pre-load again unless I make myself a proper tool. I bent the one I had all out of shape getting the right preload. The Safaris don't use the nut and locking washer as in the Land Cruisers and GUs. They have the lock rings like with the GUs. With my other Safari, I have not had any play with not preloading according to the FSM.

i will get my socket on monday and post pics,

i have the haynes manual,but it is not the best(better than nothing though)

im sure i will have questions while doing it

my patience fell short and i looked at the 1st nut,and it was tightened by a hammer and chisel or something(nice dent in it)

I`m gonna bye new ones anyways and did the same to get it off,

have lots of pics,my camera is filthy.....and the 1st bearing to come out was un recognisable.....

rang around 4 the socket 2 day to do them back up when finished and no one has them, gonna get one online for 30$, 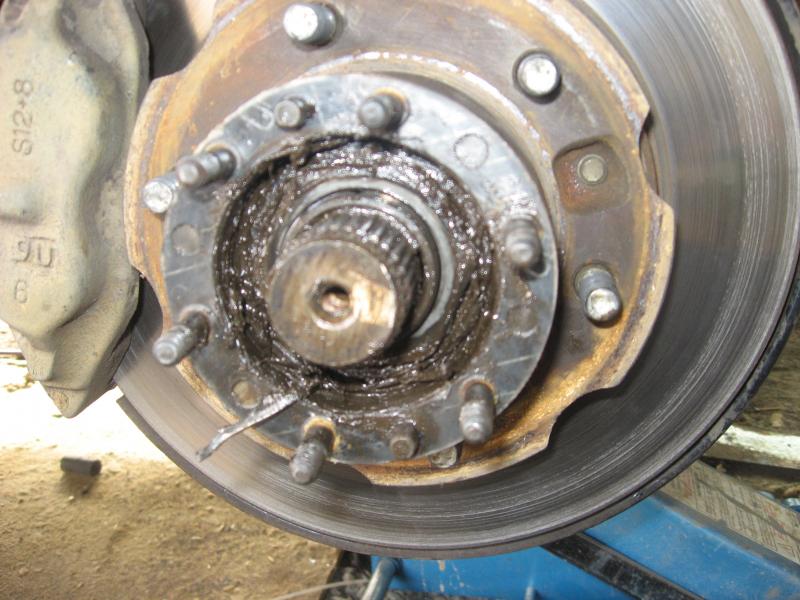 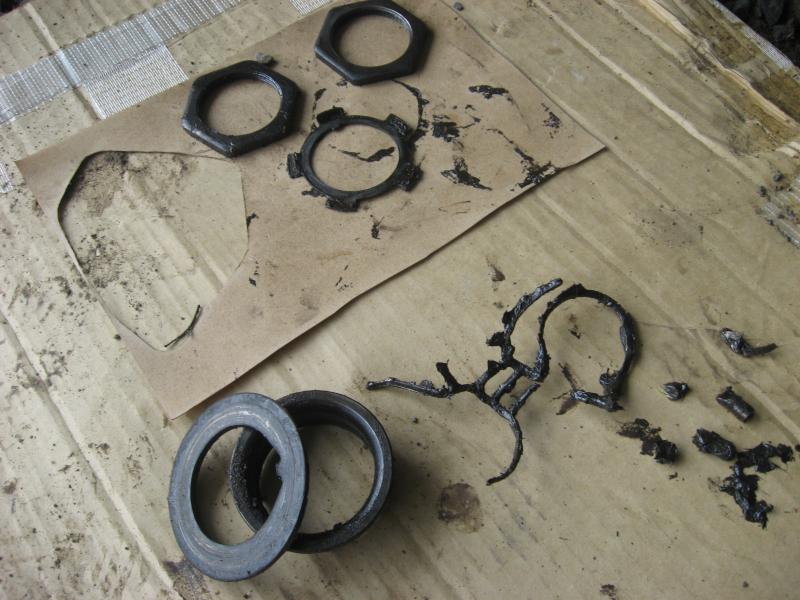 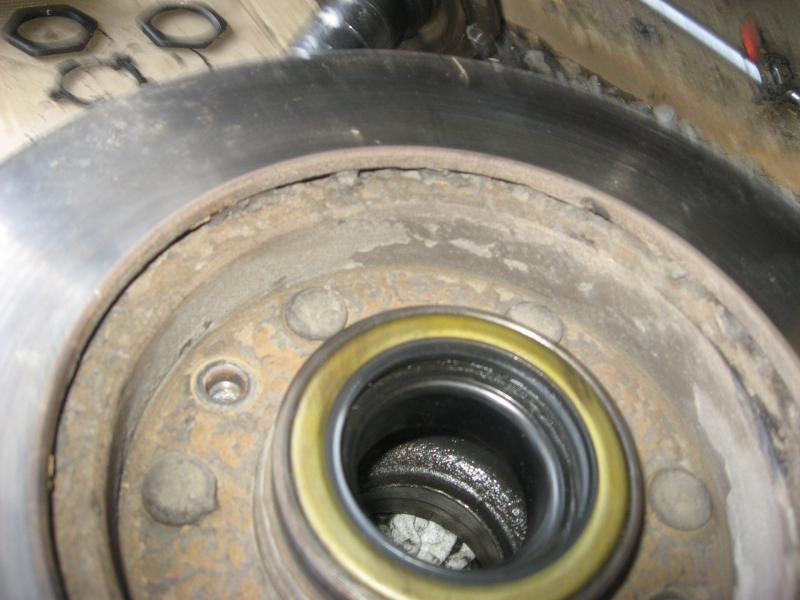 green arrow area is full of that bearing 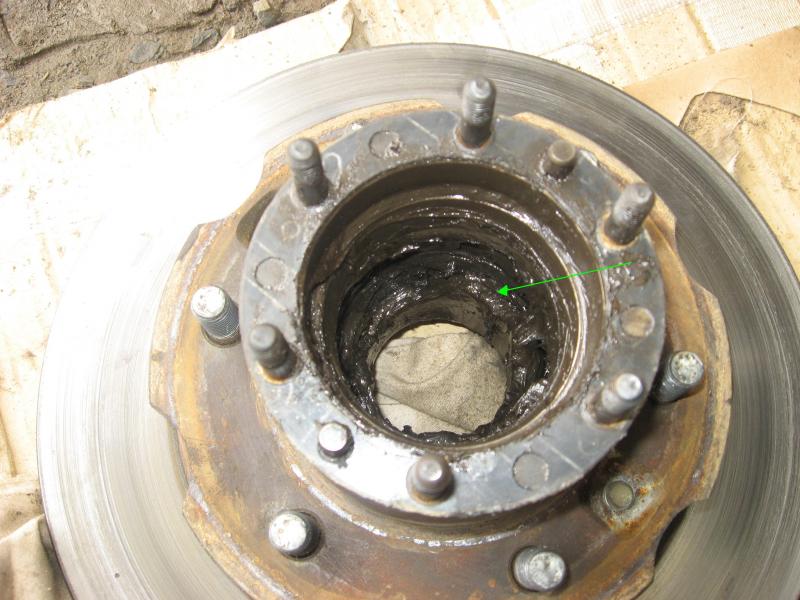 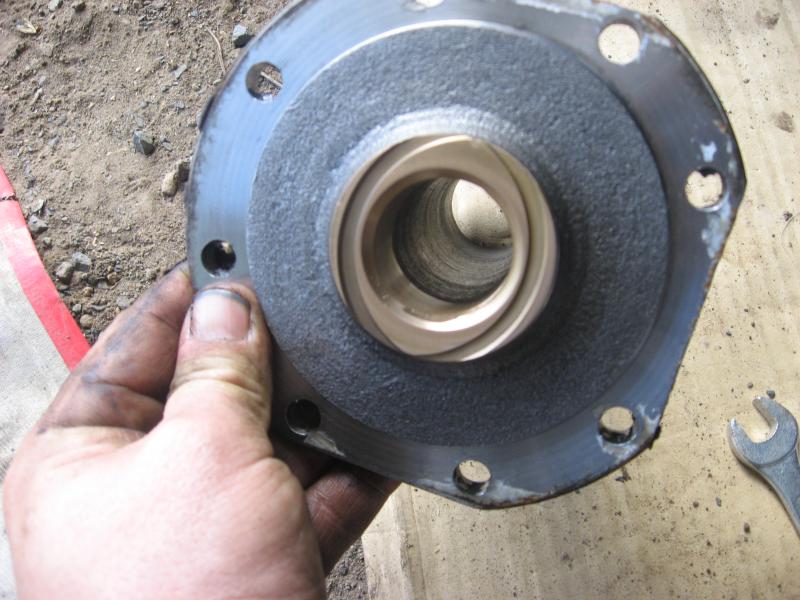 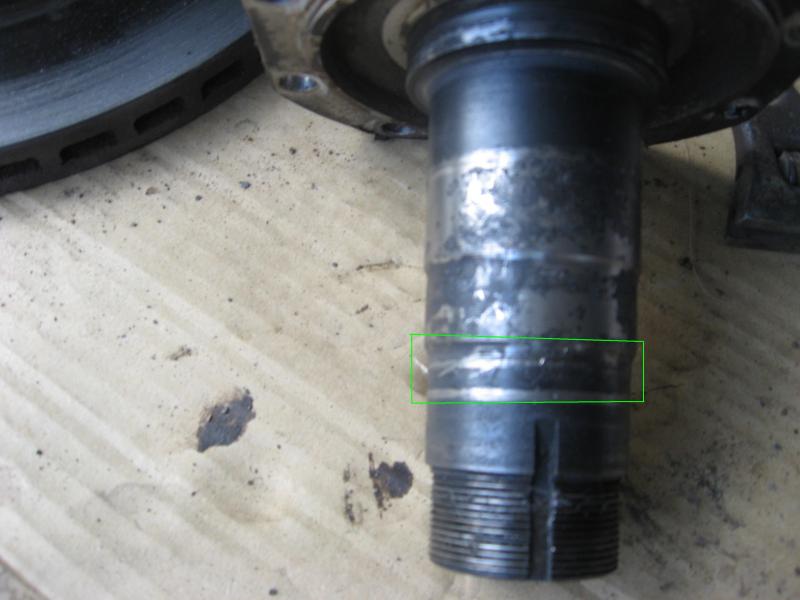 the bearing with the green arrow seems fine but will replace anyways..

with the red arrow,theres a little play moving it in and out(normal?)

all in all,the 1st nut was not locked at all,and done up by a hammer and device of somesort,,and my bearing is destroyed,

I`m enjoying it to be honest,not the cost of it but the wrenching 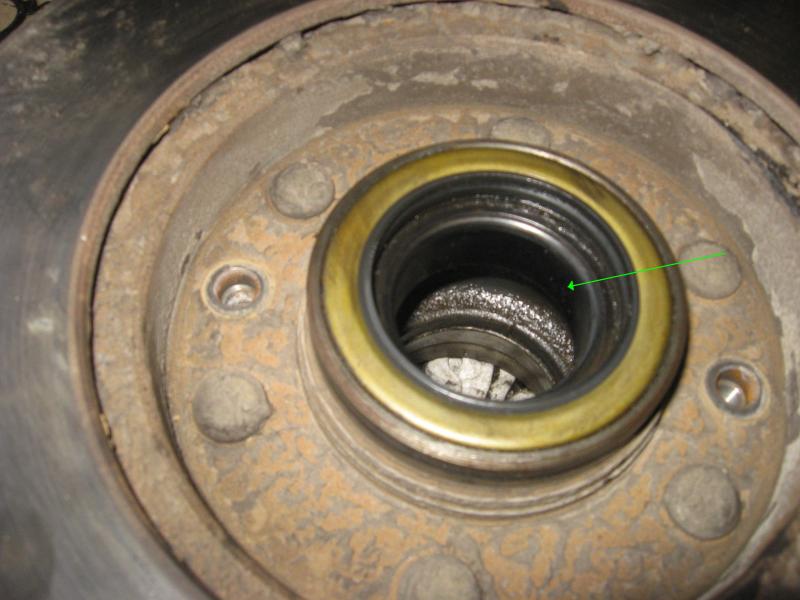 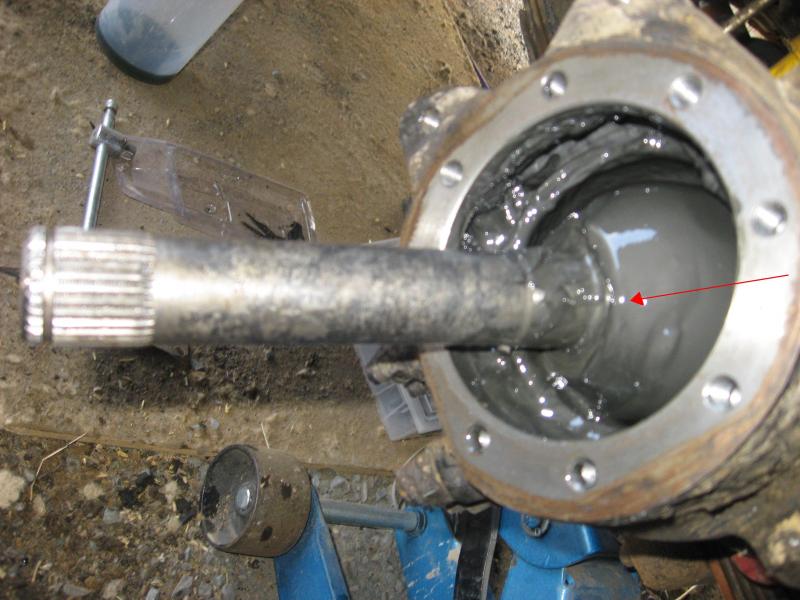 im thinking this pulls apart too,it would be easy to clean it etc,ive undone the 2 bolts and its on tight?? 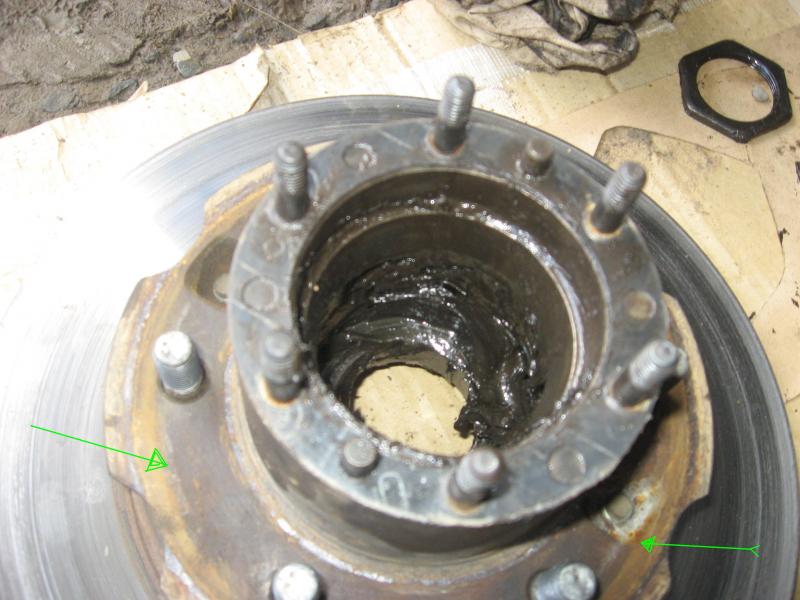 The 2 bolts are removed so you can remove the disc- might be a good time to machine or put a new rotor on - you'll have to do the same to the other side as well - just because you should check the other side bearings as well.

Pull the birfield (CV joint) and install a new axle seal - you are right there anyway. Just pull on the shaft and turn it at the same time until you find the sweet spot - it will pop out. Replace the bearing - it may seem "fine" but it is toast - don't forget that one bearing has more or less dissappearred into the grease

I don't care if the world explodes

just my two cents...
your brake pads/caliper pistons most likely got pushed back from the wheel wobbling, then when you hit the brakes there was a long distance for pads to travel, resulting in pedal pump to reestablish contact with rotor. I'll bet master is OK, but do check out brakes when done.
have fun

A note on bearing pre-load - yes, they need pre-load and the factory manual should be carefully followed. At the service level, we see many front (and rear) wheel bearing with inadequate pre-load. I would say that perhaps half of the vehicles that we see have improperly (loose) adjusted bearings.

We also find that many bearings are not serviced often enough and that bearing failure is most often related to contamination by water or dirt. The dirt is usually carried in by the water during running through deep puddles, water crossings, or driving in mud. Generally, one should avoid mud if they can - it's very hard on parts.

Another issue that comes up from time to time is the use low quality grease, inadequate grease being used, and/or improper packing of the bearings. Use the best grease you can find, clean and pack the bearings really well, and put the correct amount of grease into the cavity in the hub.


~John
You must log in or register to reply here.