Stupid thing here. '84 FJ60. A/C system completely redone by PO through LandCruiser Specialists down in Austin Texas with AFAIK factory parts. A/C works great, but has always had this odd groan to it when it runs. Sounds like a loud condenser fan whirring or something. I just always thought thats how they sounded but got together with some fellow cruiserheads this weekend and one of them mentioned that it shouldn't sound like mine does. Should sound quieter and suggested maybe its in need of oil. He ran his and it didn't sound at all like this. Again its sounded like this since I got it and works fantastic in terms of cooling the truck. Just sounds loud. Link to how it sounds running:


What you think Mud? Something wrong here or nothing to worry about. Hopefully you can hear it with this video. Thanks in advance.
P

Funny you should mention oil. I added a bit of oil to my system recently and it did seem to quieten it a bit.
That noise doesn't sound normal. It's possibly coming from the the compressor?

It shouldn't sound like that- but at this point, unless it bugs you too much, just keep on using it as is. If the compressor is on its way out, (my guess) might as well use it till it borks— then replace it.
Compressor oil is added when the refrigerant is added. If a shop did it, then there's oil in the system.

OSS said:
It shouldn't sound like that- but at this point, unless it bugs you too much, just keep on using it as is. If the compressor is on its way out, (my guess) might as well use it till it borks— then replace it.
Compressor oil is added when the refrigerant is added. If a shop did it, then there's oil in the system.
Click to expand...

So no reason to have someone check the oil level? This compressor was replaced in 2017 so pretty fresh. It does appear to be a denso unit I believe is OEM. Not sure if there were new options or only reman'ed in 2017. Cost of this unit on the invoice was some $450. The noise does not really bug me and as I mentioned it works great. But would like to figure out what the deal is. So, yeah, I guess it does kinda bug me. Just wondering if its common to only get 4 years out of a reman'ed/new denso unit. Shot of it in the engine bay in the hope someone can detect if its factory unit: 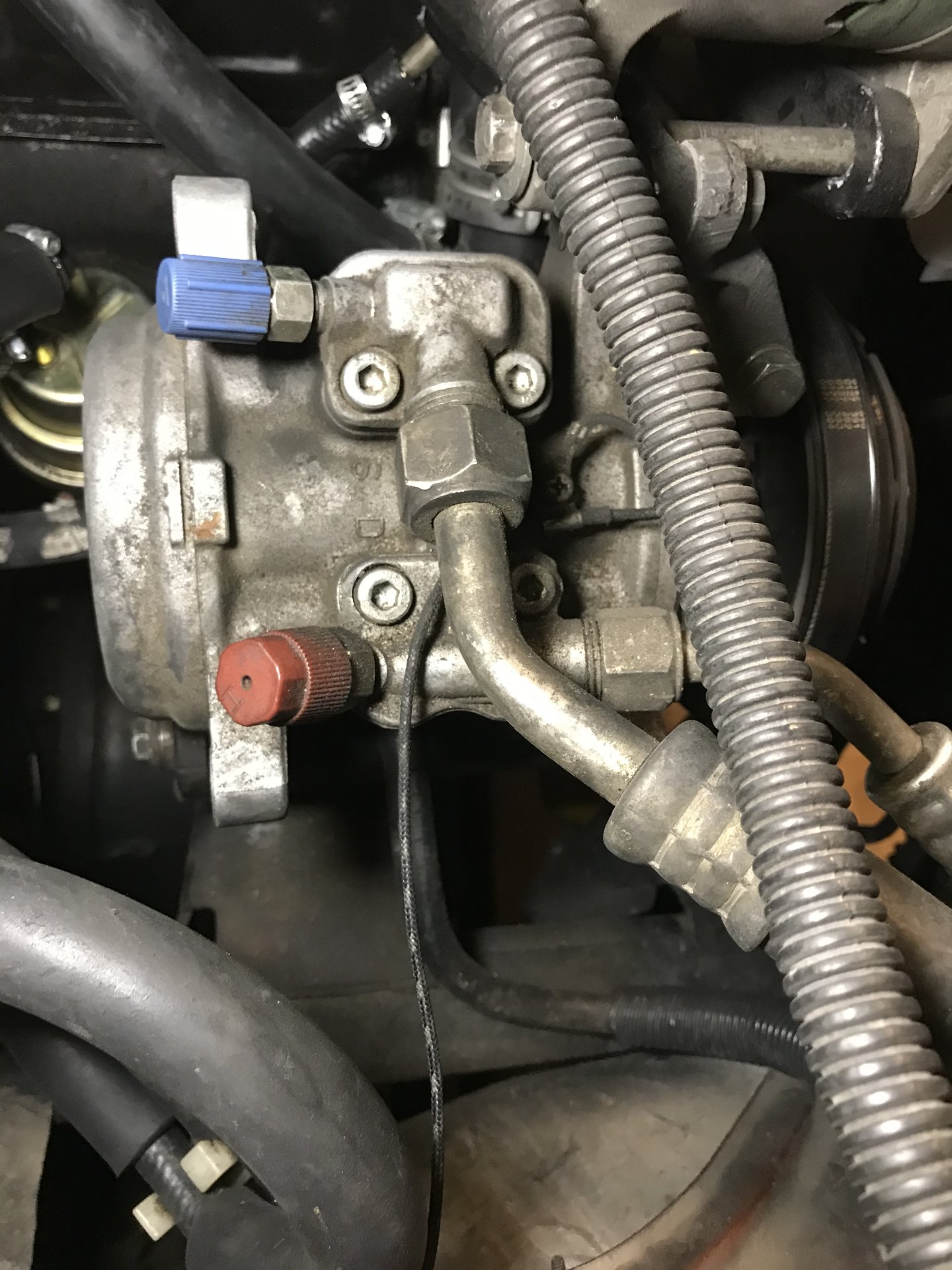 Invoice has this note:

It's impossible to check the oil. It's hard to know what the mechanic did when it was serviced. Can you find out? Could have been flushed and had new oil? old oil left in?
Mine had original oil from 1985, and when I added a bit with a new rec-drier it noticeably quietened it.
The oil would degrade after years I imagine.

So got a shot of the label on the unit. Definitely reman'ed, which may be, like starters, is all thats offered for A/C compressors. See below: 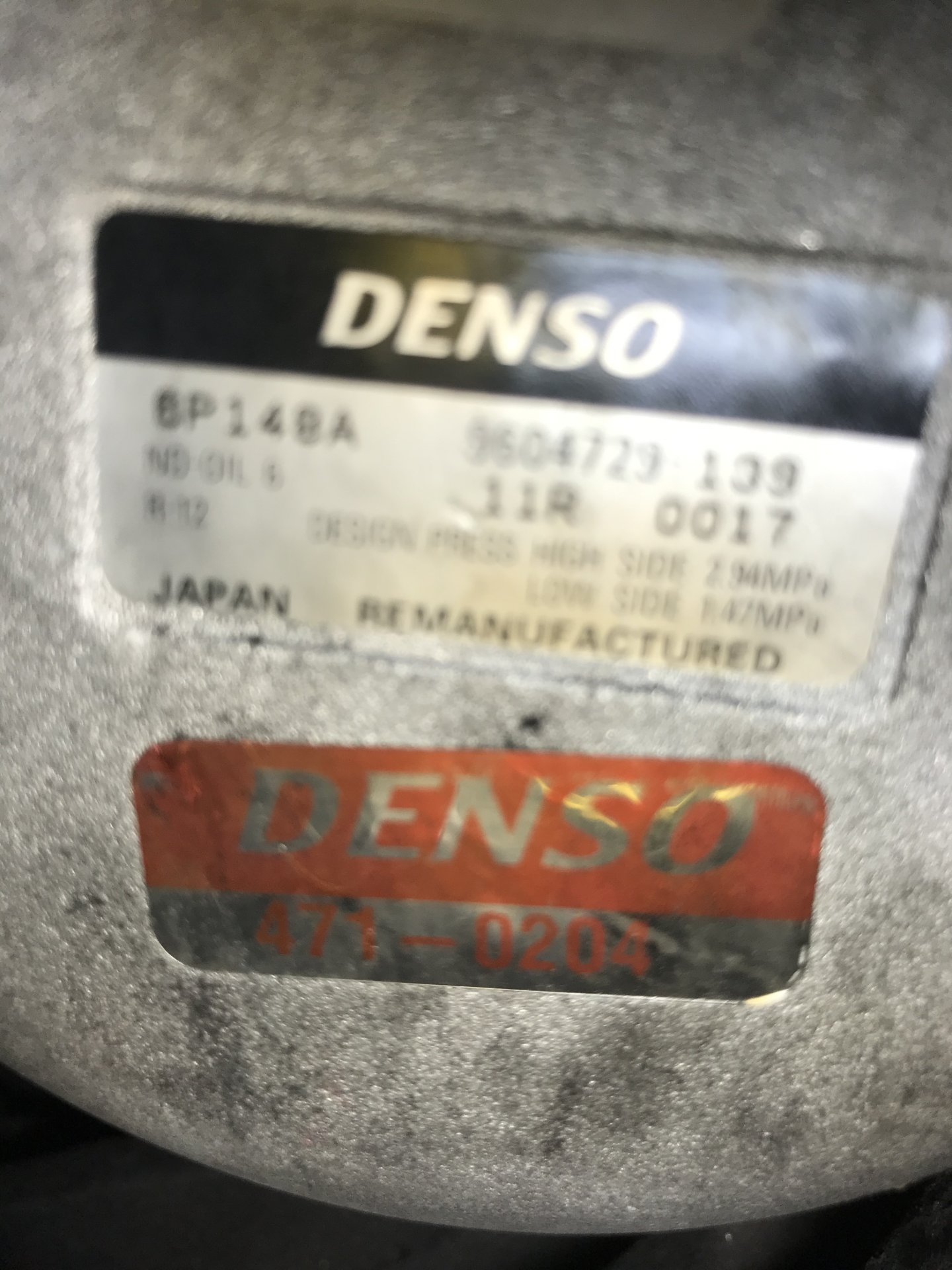 So with a reman'ed replacement, don't those come filled with oil? Surely the guy wouldn't put back the used oil in there right? Maybe @OSS is correct here and its just on its way out. But has sounded like this since 2017 which tells me it has never been right if there is something wrong.

I could possibly call the place and see if they could at least tell me what they normally do with them. But I doubt they would remember what was done 4 years ago.

Being lazy here, but whats the process of 'adding' or checking oil level of these? Can that be done without totally evacuating the system?

Edit: Nvm I see the answer to the oil question in @OSS reply. Thanks sir.

Maybe the reman'ed don't last. Possible they sound like this? Its just not something that is a recent thing. So its been broken for several years if its broken.
Last edited: Jun 28, 2020
P

The old oil stays in the system unless flushed out. Some leave it in, others flush and replace.
It would bug me too. You can have a little extra oil in the system without damaging the comp.
I would get a syringe and inject 10mil of a universal refrigerant oil into the low side, and see if it quietens it.
Fixing a Vibrating and Noisy Car AC Compressor.
3 years for a compressor is unacceptable.
If the shop always flushes and replaces oil, then it wont be an oil problem.

"So with a reman'ed replacement, don't those come filled with oil?"

It's a little more complicated. Sometimes the comp's come with the wrong oil for the freon being used and has to be changed.

Sorry should have mentioned, the oil is mixed with the freon, and remains in the evaporator condenser etc, unless flushed out The compressor does not have it's own separate oil system. It's lubricated from the oil in the freon.
Last edited: Jun 28, 2020
S

You might also check the A/C belt idler pulley bearing. I had a "growl" once on my 60 and it turned out to be that bearing.

Magnetic clutch bearing? does it make noise with A/C off? When you do a complete evac it would usually suck some of the oil out and you want to put that back in when you recharge the system and i would add an extra ounce or two if the oil evacuated was less than an ounce.

sims said:
You might also check the A/C belt idler pulley bearing. I had a "growl" once on my 60 and it turned out to be that bearing.

Yeah I thought about this too. I thought about replacing the bearing while I had the cooling system apart last year, but it seemed to move freely enough with the belt off so I decided to leave it as it.


vipergrhd said:
Magnetic clutch bearing? does it make noise with A/C off? When you do a complete evac it would usually suck some of the oil out and you want to put that back in when you recharge the system and i would add an extra ounce or two if the oil evacuated was less than an ounce.
Click to expand...

No noise with AC off. Only when compressor cycles on which may rule out the idler pulley.

I assume since the shop replaced most all the A/C bits they would of had to evacuate the system, no? There is not a way to replace things like a dryer, compressor without doing that, right? Shop had to put Freon in it when they did the work so if the oil is mixed in with the freon gas charge, then is it safe to assume there is oil in the system? Shop invoice does not say what type of freon they put in. I have the invoices from the PO but unfortunately didn't talk to the shop myself. I have since done all the work on this truck myself, but don't have the skills or tools to mess with A/C systems as this post thread may reveal to everyone. Any use it taking it to Toyota to have them mess with it or is that a mistake? Its working fine and maybe @OSS is right I should not go looking for problems where there are none. Let it ride and deal with it when and if it breaks? Just makes loud annoying noises.

When i replaced my A/C ...I had found some info on using PAG46 ac oil. Not sure where I found this, but I used it on mine and is doing fine. The 85 FJ60 chassis and body supplimental has info on A/C rebuild and shows using Denso oil 6 or Suniso 5 gs or equivalent. 5.2 to 6.3 oz. Maybe important to note here that freon has changed and r134 or r12 may or may not make a difference in what type of oil. I put r134 in mine ...changing the ports out.


Any A/C shop would know to add oil to the compressor. You need to remove it, dump the old out ...install it in the truck and add new oil before charging. Also they should have pulled a vacuum on the system to remove any contamination. When old compressor fail they will push debris around the lines and into other parts. That's why it's recommended to replace the dryer, expansion valve, and condenser when replacing a failed compressor.

I imagine running a compressor low on oil would be similar to running an engine low on oil. When the rotor bearings wear prematurely because of lack of oil and start making noise...it would be to late. Adding oil at this point is not going to make the bearings less worn out even though it may quiet it down some. You'll need to evacuate the freon, vacuum the system and add oil then re-charge freon. But in reality it may be a waste of time and money.
Last edited: Jun 29, 2020

So noticed today that the compressor is quiet when first starting the truck. After some time it gets loud. Would that change things for anyone with regards to why its making noise? Low on oil and as it cycles on and off gets louder and louder because of lack of lubrication? AFAIK there is no condenser fan on these trucks (don't see mention of one in the FSM anyways), but thats kinda what this sounds like. Like a fan motor going out.

BlackCat said:
The reman’d Denso I now have sounds like that, just not as loud.
Click to expand...

Glad I am not alone in this sound. Thanks for confirming. I am not going to go looking for trouble here as suggested. It blows cold just makes noise. Worse things in the world I guess.

Did notice something on the invoice regarding work done on the A/C system:

So good to know. Change anything with regards to why my compressor sounds like this?

When it's 107 degrees and muggy and I turn on the A/C, mine sounds like this:

What @OSS said. Shouldn't sound like that, but from my limited experience it's not indicative of something overly bad or impending catastrophe. My first guess would be its the clutch bearing on the compressor getting worn. If your original clutch was put on the new compressor I would definitely lean that way.
P

That note appears to read flushed mineral oil and they used poe oil . Looks like the shop knows what they're doing.

Mine just sounds like the blower fan. Other than the 25% drop in HP I'd never know mine was even on
You must log in or register to reply here.