What is this thing called? (it's a part on a '78 USA fed spec carburetor)

See the pic below. Does it have a name and what does it do? Rebuilding my carb and the gasket inside this doodad is toast. Can't seem to locate the part at SOR, so I need a more specific reference. By the way, many thanks for that Youtube tutorial, @Pin_Head. You rock. 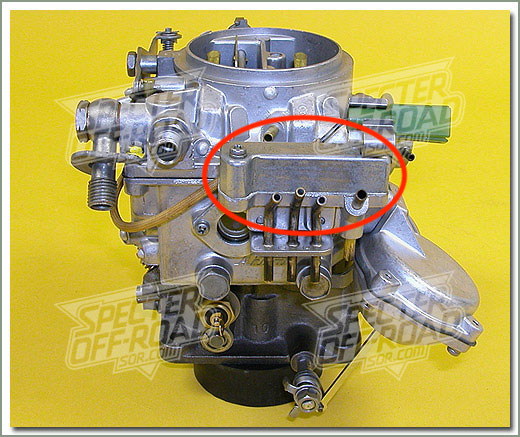 I think it's called a hot idle compensator.
N

Probably has a name. Jim C. or Pinhead or Mark or whoever might know. It's mostly just a junction point for vacuum lines to the ports on the rear of the carb near the idle mixture screw. The three small ports will be for the vacuum advancer, the egr control line, and the throttle position sensor. I don't remember the order... and it doesn't really matter. If you look at a factory diagram you'll see that quite a few other functions use those same vacuum sources for a host of other duties - mostly smog related - via "T"s, orifices, and the VCV (vacuum control valve) on the driver side fender. Still, not as bad as the '79--> stuff. The larger port has a reed type metering valve inside the rectangle box section. It controls the manifold vac signal from the smaller of the two ports facing the master cylinder on the stock carb insulator base and up to the port directly behind your "doodad" that is just within the upper left of your circle. I can't really remember what it does as its been a non-issue for me so...oh look... a bird. What were we talking about?

I still have the OEM fossilized-but-functional red-colored line running from the larger port to the carb. I don't dare touch it out of fear it will crumble into dust. 75 carbs may develop the most power out of the pre-cat carbs but I really like the '78 federal carb for its' versatility.
N

The big port may indeed be the HIC line. That seems to ring a bell.

It's a "Thermostatic Valve" 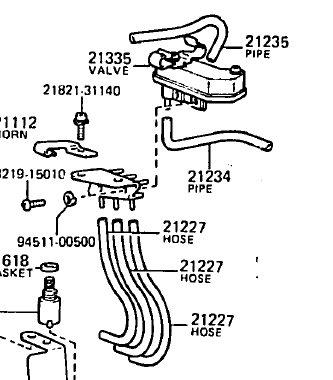 It is a thermostatic valve that is the hot idle compensator.
N

@Pin_Head So it's not a reed valve but a bi-metal valve? I haven't looked inside it in years. I wonder if there is enough heat from the intake on an engine with headers to have any effect.
You must log in or register to reply here.

W
What is this?

Is this a symptom of a weak alternator?

K
What part is this - Can you help