You will see several threads from me on my fuel system and I have spent a lot of time and $$ trying to get it just right. I recently gave up on the full pressurized system and drilled a hole in my gas cap to keep the pressure from putting fuel into my carbon canister. It has been working great as long as I don't fill it until today.

We were doing a climb to Kingston peak, about 12K when my engine sputtered and acted like it was missing and died.

I got strapped to the bottom of the last steep hill and was able to get it started and running if I kept it at 3000 RPM or higher. Once it dropped down it died. I started it a few times and it died before I could get it in gear and get the RPMs up. Fortunately the way down from the peak was all downhill and I was able to coast to the highway were I got it towed home

I want to see if I can determine if its a Fuel flow problem, the EFI Computer or other issue before I figure next steps

My old Gas tank was leaking so installed the Man a Fre pressurized 22 Gal tank in the rear under the bed. Its my only tank

They added a Carbon Canister and pressurized gas cap. Fuel would go through the carbon canister making the truck stall, Didn't seem to be that today

I was still having issues only when I filled it, so now only fill it to the 3/4 level and that at least seemed to take care of the running issues

I also was still getting a fuel smell in the engine bay, so I drilled a hole in the Gas Cap and gave up on the Pressurized system

When I had the issue today, I took the cap off and no pressure issues. I even removed the grommet around the cap to provide a greater vent

Even now sitting in my garage at home it won't start, so not an altitude issue. At least anymore, potentially altitude could have done something to gum it up

I changed the fuel filter about 300 miles ago. I know that is a potential

Looking for some advise on how to isolate the problem. For example, whats the best way to see if their is fuel flow? I don't know if I should attack the computer, the fuel delivery or other.

Thinking if I disconnect the battery the system may clear. Is it possible the learning program did something?

I received a comment that fuel injection should have nothing to do with Altitude, which is what I thought. The suggestion is we were wheeling on bumpy rocks and maybe some connection got loose

Other thoughts is to drop the tank and check the connections with the new tank and custom fuel pump @RLMS put in. They did great work and always very clean and professional installs so being clear not a knock or blame on them. 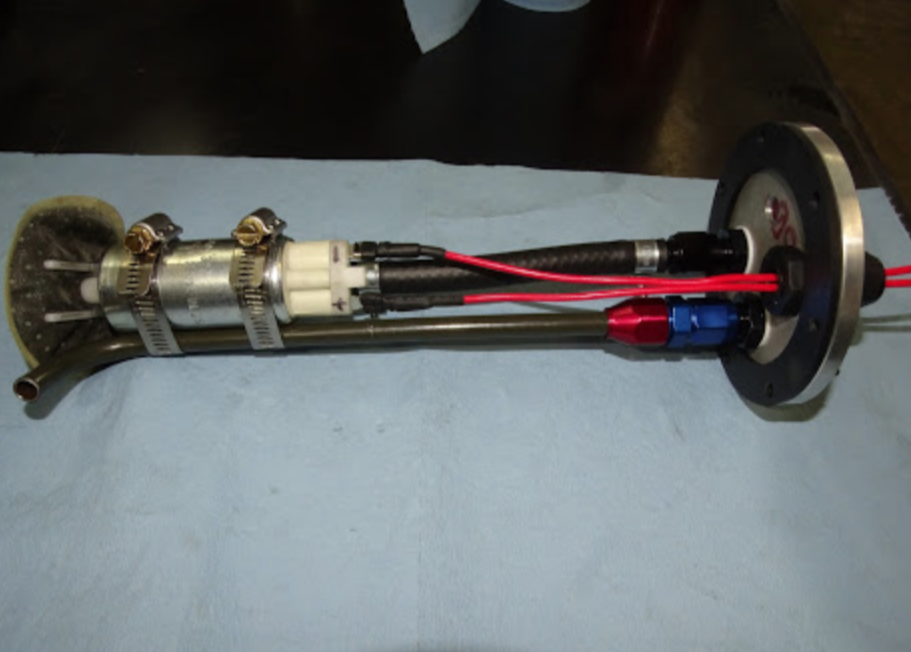 The fuel sender does appear to work so that would be the yellow and white wires on the 2nd plate. That doesnt have anything to do with fuel supply though 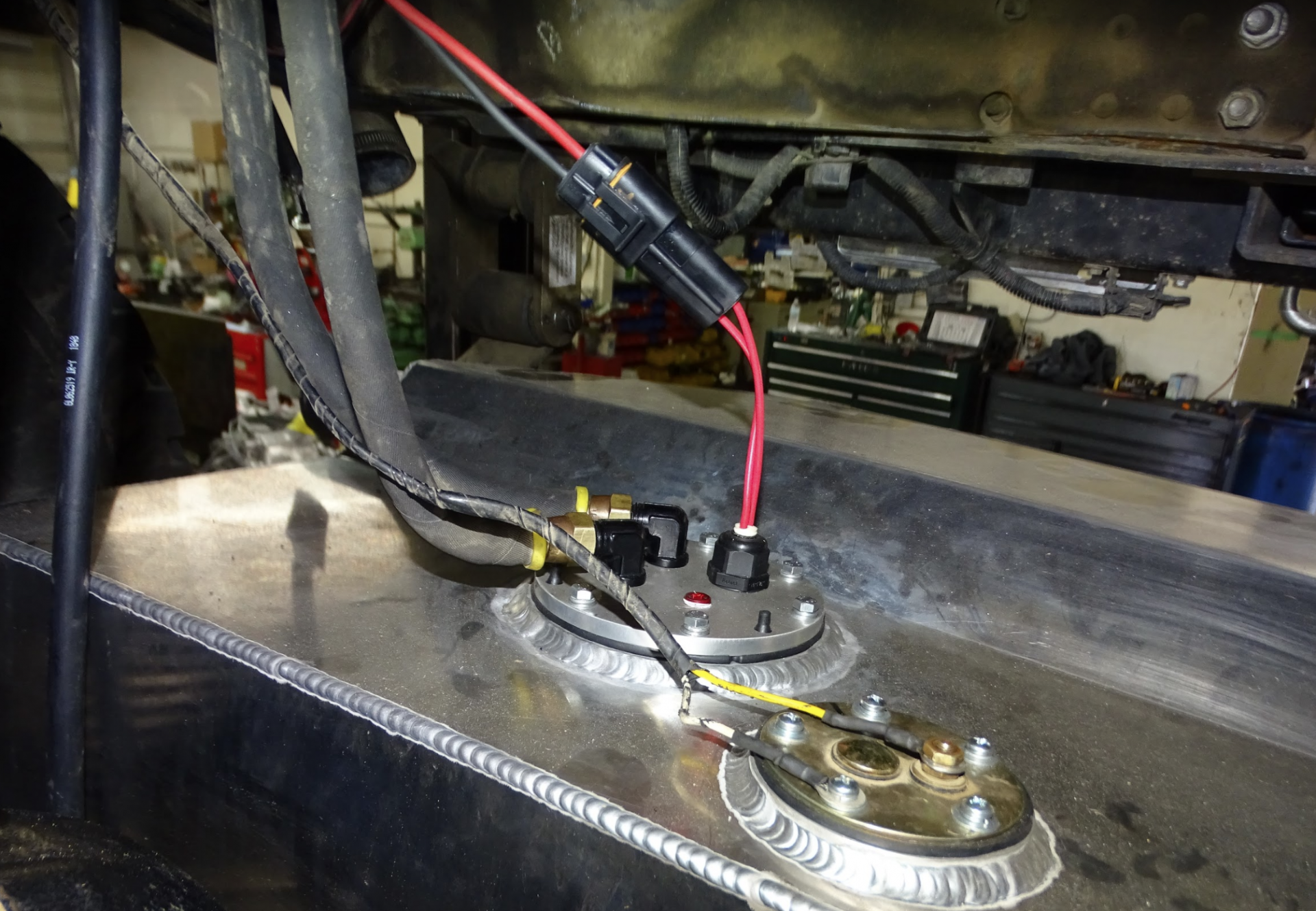 sounds like your on the right track. did you try a aerosol spray can of starting fluid in the air cleaner with the filter removed? be gental with the spray at first but that will tell you if you need more fuel if its starts on starting fluid or if it does nothing I start looking for something other than fuel

Thanks. Getting tips from my club forum as well. It is helping me break it into pieces to solve the problem

I'm not familiar with Holley multi port fuel injection, but fail to see why you would need any canisters or separators (literally any smog systems) with your 383 conversion ??? If your rear tank is your one and only tank (not plumbed into a stock tank) why wouldn't you just run a fuel delivery line directly to the fuel injection system, and a return line back to the tank- - -must be something about the Holley injection I don't know ???

Jim, thanks for your reply. I added the stuff as when I pressurized the tank, excessive fuel ram to the injectors wetting the air filter. Maybe I should just go back to a vented system. I wanted pressurized because my wife was complaining about the fuel smell in the garage

I disconnected the fuel line and there is gas flow. I reconnected and it started right up. It would not start when it got home after sitting for a couple of hours

So wondering if:
When I filled up the tank before heading to Kingston Peak wonder if it had to much pressure and saturated the Charcoal canister. I can take it off and see if there is gas in it. The one way check valve should have prevented that

Something with the computer?

Its boxed in now so I will take it for a drive later and see how it responds.

Charcoal canister is empty so fuel coming back that way isnt an issue. .
Wondering if either the fuel level in the tank or pressure could have sent fuel back the return line saturating the injectors?
Last edited: Aug 23, 2020

I wouldn't think it's the computer. My approach would be to start with the most likely, check filters then pump.

Regarding your original issues, Is it possible your pump is providing too much pressure?

So read that the O2 sensor can cause this problem on the Holley EFI. Took it off and took it to the guy who built my engine and he said it looked fine, I bought a spare new one for later

He looked at the fuel trim etc in the computer, I downloaded a plot before I came and he didnt see anything there

Looking like the new fuel pump with 600 miles on it. My engine builder was wondering if the pump was starved, but the 22 gallon tank is still 3/4 full. Not sure if its baffled

Wondering if the fuel pump is heating up and stops working

Cause is a bad fuel pump. In my tank setup have to drop the tank to replace.

What kind of fuel pump was in it? Dont you need a separate vent line for a evap system? I would check to see if you have baffles in the tank. I'm curious how your fuel lines are plumbed.

I was thinking about your seemingly intermittent problem, that it would run above 3k rpm. My experience with fuel pumps is they work or they don't, no in between. You may have a loose wire at the pump instead of a bad pump. Curious to see what you find when you pull it.

Update:
I added a fuel gauge and tied it into the computer

Red Line found that they way they modified the tank and provided a foam soffet (Wrong term?) around the pump was actually clogging the pump and overworking it. It had created debris of foam particles. So they removed the foam and replaced the pump and cleaned out the tank. The purpose of the foam was to ensure there was fuel around the pump input even at angles. There are a couple of baffles in the tank so will have to rely on those.

They said it is working fine now and they are going to do some more testing to ensure there are no more issues
You must log in or register to reply here.