Okay, so a friend with a transmission shop lent me a bay and a mechanic to swap out my clutch today. They're not so familiar with FJ's, so things didn't go so well.

They couldn't get the transmission back in with the top plate on, so we dismounted it, held it in place while they stabbed the tranny, and reinstalled it. Of course that didn't go right as a quick test revealed that I didn't have 1st or 2nd gear. Apparently the detents didn't seat correctly.

Long story short, we ended up having to remove the tunnel (seats, brackets, carpet & heater core dismounted) in order to get the top plate on correctly.

So, question is, what did we do wrong? Should we have unbolted the rear engine mounts? Is there a trick to getting the tranny stabbed without removing the tunnel?

One other thought... Any good preventative maintenance ideas for while I have the tunnel off?

No friendly tips eh? Thanks anyway.

It didn't go well because they did it wrong. The correct way is from the top, as you eventually found out, by having to remove the seats and transmission cover. There should have been no need to remove the heater though.I would love to know how they got the gearboxes out with the two shifters in place.

Preventive Mx items to do while it's opened up would be replacement of pilot bearing and rear engine seal. Also drain and refill the two gear cases with fresh oil. And put a new gasket on the transmission cover.

There should be no need to remove rear engine mounts, in fact doing so would greatly complicate the job.

Did they resurface the flywheel?:whoops:

Not having a good day eh?


johmbie said:
Should we have unbolted the rear engine mounts?
Click to expand...

Just drop the rear down till the head rest on the firewall and you'll have plenty room w/o removing the shift tower.......

Your friend that loaned the bay and mechanic must be a pretty decent fellow because he lost a days revenue........

Toyota manual says to remove shifter covers, the tranny shifter has a retainer on the top, press this down, and rotate to the left as I recall. The retainer is just metal colored, and is the peice the actual shift lever protrudes through, and covers the area between the lever, and tower on the top plate. If you look on each side of the tower, there is a pressed head. These are the two pins that hold this retainer in. I'm sure other truck trannys have used this settup. The shifter will come right off, stuff a clean rag in the hole. Transfer shifter, depending on year is straightforward, but tough to get at. It requires removing the linkage going to the high low selector, and the two long bolts that the lever attaches to the side of the transmission with.

Drop driveshafts off course, remove speedo cable from transfer. E brake cable can be removed from backing plate, but I've never attempted it, looks like the clip is not very reusable when you do that. I usually take it loose at the fire wall to get the need length, or take the entire backing plate of transfer, but this requires pulling the drum also, risk of seal damage, and gasket replacement.

Tranny uses 4 bolts, Clutch has 6. As others mentioned, replace rear main if you want, pilot bearing, throwout bearing. Flywheel resurface if needed. I find the fit between the tranny front and bellhousing opening, coupled with the tight fit of the pilot often times can make it very hard to stab the tranny back in unless perfectly aligned.

Buddy is great for lending me the facilities etc. Yes, we resurfaced the flywheel. Downer was that they chose not to replace the pilot bearing while I wasn't there. He claims it was in good shape, but still. Also, He says the u-joints I got from MAF aren't the right ones. I find that hard to believe.

johmbie said:
He says the u-joints I got from MAF aren't the right ones. I find that hard to believe.
Click to expand...

Doing one now, without unbolting the rear motor mounts..I don't see how you would do this without
removing the tunnel.

remove rear motor mounts lower tranny pull it out using tranny jack replace clutch and other related parts.its only a 3 hour job i have done 40 or more cruiser clutches and never had to pull the tranny hump and or seats .most tranny hump bolts around here break off so its way more work to fix all the broken bolts and just pull it from the bottom good luck

Well, the job's done. Now I'm driving around without a tunnel, cooking my leg! Want to take my time putting it back together: reroute my stereo wiring (tuffy center console), clean out the heater core etc.

Broke the welds holding the honda seat to the stock seat mount for the passenger seat; might be a good excuse for not taking the

around with me for a while till I get it rewelded! Also pressure wash the inside out while I have access to all the nooks & crannys, then mount up some new 6x9's I've been meaning to put in for a while. Fun stuff!

Thanks for all the advice! 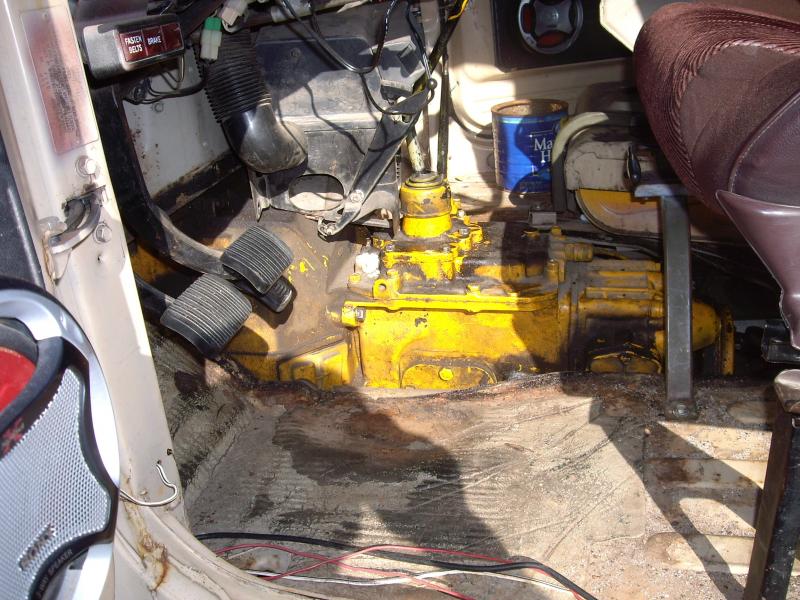 Any recommendations on what to use for the tunnel gasket? Other than ordering one, can I use weather stripping?

I used some heavier duty black weatherstripping I picked up at the hardware store. It was cheap and has worked OK so far.

The foam weather stripping works just fine, find a width that fits well, and also pre punch the holes for the bolts. Getting some with adhesive on one side makes the install easy. You can punch holes with a sharpened little peice of pipe or shell casings of various calibers for a clean hole in the foam.
You must log in or register to reply here.