real easy question: what's the difference between a turbo and a twin turbo?

me and a bud were tryin to figure it out, but neither of us have ever turbo'ed anything.

thanks,
jonathan
'these are my awards, mother, from army. the seal is for marksmanship and the gorilla is for sand racing.'

i figured on the two turbochargers thing comin up. thanks tex, i respect the insult.

jonathan
'these are my awards, mother, from army. the seal is for marksmanship and the gorilla is for sand racing.'
T

Not always, though. I think the GMC Syclone / Typhoon is a single turbo, but is a V6. I don't know much about turbos, either, but two small turbos will spool up faster than a single, large turbo. This allows for a more linear torque curve. I could be completely wrong, but this is what I have heard before.

Some cars aren't limited to two turbos. Check out the Bugatti EB110. It had four turbos.

the peterbiult(BIGtruck) at work is an I6 with a twin turbo. and i think how it works, it's through one and into the other then the motor.
i guess i know more once i get my cdl.

Twin turbos can be smaller and spool up faster, yet still move a large volume of air. A number of I-6s run twins and most V motors run singles. One of my students has a 58 Bel Aire with a monster turbo on the 350. The 3rd gen RX-7s used a sequential turbo set up to spool up fast and still provide prenty of air at high RPM.
The Supra twin was imported here, but not for long. Well built ones run 1000 hp reliably on the street.

Twin turbo's are also used where a smaller turbo does the down low boost at low rpm to spool quicker and the larger one does the volume at high rpm.
Darren M.

"There's a gigantic grey area between good moral behaviour and outright felonious activities. I call that the Weasel Zone and it's where most of life happens." -Scott Adams

I don't know anything about Turbochargers.

i love supra's almost as much as cruisers. 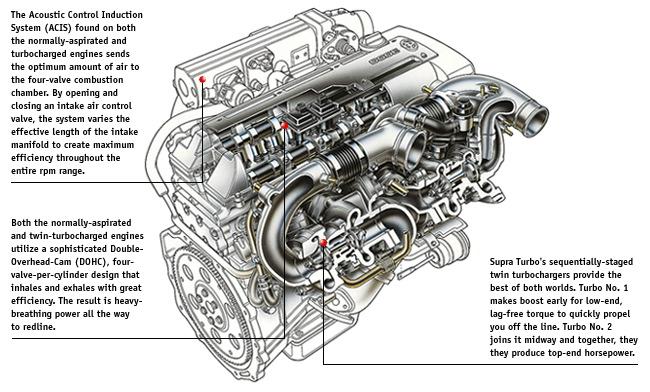 i figured on the two turbochargers thing comin up. thanks tex, i respect the insult.

nah bro, it's all in good fun and i didn't think it was an insult.

i doubt a person from texas could insult somebody from south carolina anyways, i've heard it all already. haha

(now i get to go act like i know what i'm talkin about. haha.)
'these are my awards, mother, from army. the seal is for marksmanship and the gorilla is for sand racing.'

I will be working on a twin-turbo setup for a 2F pretty soon if I can. I haven't figured out how yet, there isn't terribly much room in the engine bay, I haven't done my homework on this either, but I hope it could make a drastic improvement in torque and low-end power, allowing the use of a big overdrive ratio for improved mileage : turbos combined with fuel injection, maybe LPG... oh, well, time will tell what I do I guess... I have to find myself a 2F rig before
'73DW15 '75BJ40 '90HDJ80 '98CE110 '01UCF30

72cruiser, I'm at Clemson University but from Vermont orginally. Just aquired an '86 HJ60 (still currently in Canada, I pick it up in Dec.). Any good wheelin' trails up in the mountains? Some weekends I just need to get off campus...
IG: @TransientRambler
Project Overland (old build thread)

glad to hear about another tiger on the board.

there are some decent trails up around walhalla (past seneca) and there's a place called horse pasture (haven't been there, but heard about it). nothing serious, but still fun. i have yet to take the cruiser out this year (actually since fall semester last year), due to some technical difficulties.

i hear ya about gettin off campus, i was dyin for fall break. and now that i'm home, i can't wait to get back. crazy stuff.

where you live at? i'm over in lightsey ii. oh, and more details about the hj60.

see ya round,
jonathan
'these are my awards, mother, from army. the seal is for marksmanship and the gorilla is for sand racing.'

I am in the process of taking a 2F to a forced air induction system. I thought about turbo, which I am a HUGE fan of. Big fan of Audi quattro turbos.
But in my research, and even before, I knew the 2F only has 4 main bearings and that is great for a stock engine that has some slight tweaking done to it, but not for anything more than 8-10lbs of boost. I decided I am just gonna cast my own intake that will accept a Roots style blower, so I can keep the boost in the 5-6lbs area.
That would give me great low end power and top end as well, without sacrificing
the engine. Even with the small blower I will have to have forged rods and pistons.
But the reciprocating assy. can't hold up to that with any type of longevity anyway.

The single turbo and twin turbo argument was right and wrong on a few accounts.
The term "twin" implies two turbos, but initially indicated that you had to identical turbos on whatever vehicle. The Supra(one B.A.M.F!!) has sequential twin turbos.
Meaning that (someone else stated this right) it has a smaller turbo, smaller impeller anyway, and a larger turbo that it fed. The smaller turbo gave the initial "get up and go", then the wastegate was programed to feed a portion of the charged air into the larger turbo to help it "spool" faster. The larger turbo was the high speed nuts of the car.
Some friends and I "Toy"d with the idea of a Supra TT in a 40, but there isn't much low end where we would need it. Unless we geared it like Marlin at 2K:1 then we could wind it up and go. But they do not lug at all. There is a local guy here that runs a Supra engine in his 40. Not sure if it is a TT, or single turbo, or the older I6.

But forced air induction is the quickest way to get reliable power(other than nitrous),
but I think it should be throttle reactive charged air, no lag time available when climbing rocks. Now, a mudder truck, that would be cool!

P.S. To introduce myself, I usually am on Pirate. I go by Kruzrtek, of course.
I rebuild Cruiser carbs, do a lot of fab work on Cruisers and other 4x4's. Do a lot of gear and locker setups. Do a lot of engine conversions(you know, shoehorning this into that), then I do all the wiring.
I like the way you guys are setup here on Mud. If it is alright, I'd like to stick around sometimes and more often. thanks, Rich

i would invite you over this weekend, but unfortunately, i am gonna be out of town. i'm even gonna miss the game. AHHH! do y'all need tickets or anything? give me a couple days notice and i can probably get you a few.

if you'll still be around on sunday (doubtful) i could probably meet ya somewhere or something if you'd like. if not, it'll have to be some other time.

i am comin down to atl 2nd or 3rd week in nov to see rx bandits and something corporate. don't know if you like indie or anything, but it should be a good show nonetheless.


aight bro, have a good one,
jonathan
'these are my awards, mother, from army. the seal is for marksmanship and the gorilla is for sand racing.'

this setup, has anybody done it before? i've heard of some crazy stuff goin on, but it usually deals w/ something other than the 2F. do you have some personal preference towards it? (i personally like it, and i can't afford anything else, so.....i like it.)

it sounds like a lot of fun tryin to work all that stuff together. i hope it comes out well, and maybe that i'll be able to see it someday.

also, i have a couple of carb questions. do you mind if i send you an email about that?

thanks,
jonathan
'these are my awards, mother, from army. the seal is for marksmanship and the gorilla is for sand racing.'

[quote author=Gumby link=board=1;threadid=6496;start=msg52614#msg52614 date=1066601319]
Twin turbos can be smaller and spool up faster, yet still move a large volume of air. A number of I-6s run twins and most V motors run singles. One of my students has a 58 Bel Aire with a monster turbo on the 350. The 3rd gen RX-7s used a sequential turbo set up to spool up fast and still provide prenty of air at high RPM.
The Supra twin was imported here, but not for long. Well built ones run 1000 hp reliably on the street.
[/quote]

the twin turbo supra was manufactured here from 93-98, single turbo before that. a lot of the twin turbo supra guys switch to a single, huge turbo for huge HP gains, but they also have to deal with the lag. twin turbo's spool faster but you get a lot more power out of a single huge turbo.
You must log in or register to reply here.

Muffler for turbo 'd 2H to pass inspection in BC

A
California Spec vs Federal Spec