trying to find some fittings.. (1 Viewer)

i am trying to find some pieces needed for my turbo kit.. i am not sure if my "google-foo" is not working right or mabey i am looking in the wrong places but i am not having any luck.. i have about 20 different ih8mud threads saved talking about putting together their turbo kit but no real good info on where they actually bought the stuff. i see references to a jgs turbo website and some ebay stuff but thats it.. and mabey it would be just easier if diesel42 (keith) can just sell me the parts that i am looking for but i would like to have my own source so i am not depending on or having to go through someone else to get me parts..

i am doing the gt2052 turbo setup on my 3b (same turbo as diesel42's kit) and have sourced everything myself so far.. i am building my own manifold as well because i think the 13bt manifold is a bit limiting on what you can actually do with a custom turbo setup and my engine bay is crowded as it is..
All that is left to source is the M10x1.0 metric fitting for the oil feed and the oil drain flange.. both have been a bit annoying to find.. i havent been able to check any turbo rebuilders here in town yet or even perhaps with the cummins or detroit dealer but the hydraulic shops are being a bit difficult to deal with regarding the issue..

i would like to find a M10x1.0 to -4an fitting for the oil feed and the ebay stuff i see all have 1.5mm restrictors in them.. i have ready nothing about people using a restrictor fitting for the oil feed to their garrett turbo so i assume that you shouldnt use one.. most of what i read says you only need a restrictor fitting if you are running over 60 psi under load.. (to prevent oil pushing past the turbo into the exhaust..)
also, i wonder if it is possible to find a banjo fitting that could go to -4.. i see a lot of volvo heavy equipment and some other foriegn stuff using a M10x1.0 thread fitting..

for the oil drain, i know you want to go as big as possible and i have also read that you dont want to run the garrett drain clocked more than 15 degrees but where is a good place to find this flange?? i dont think it matters if it has push on barbed ends or an actual jic fitting.. once again, some to be found on ebay but i would like to find a reputable dealer for this stuff.. whats the minimum you can go on this?? i am seeing a lot of -8 to -10 stuff..
F

anyone?? i am still looking but still need some help here...

Summit raceing equipment sells a ton of AN fittings.... Have you tried looking there? If you still have troubles let me know, Ive got allot of websites from when I had my VR4 Galant. Hope this helps.
dmx

I had the same problems with my build, the biggest headache was finding the right fittings, mainly the turbo inlet.
So I bought several different fittings, off the net, fittings from pipe stores etc. My wife was being induced and I was looking for fittings (3rd child).
Found one on ebay for my turbo (I have the older version of the gt2052, the T25) but it had the restricter on it. I guess you could drill the hole out.
I used one of the other fittings I had ordered from mcmaster or somewhere as I thought it threaded better without the restriction.

I actually ended up overtightening it when I was threading on the oil feed line, I didnt realize it though until later. I was going up a mountain pass on a date with my wife on our first longer trip post turbo when I thought I smelled oil and noticed the oil pressure was very slowly dropping.
I pull over and realized that oil was pouring out of the oil feed when I revved the engine, not tons, but way to much but enough to make a steady drizzle with revved. Before this there was a faint seep, but nothing to alert me to this.
It shortened our date as we went back going 45mph on the freeway and took the lx470 real quick to get some food. I had oil with me, and if I kept the rpms down it would barley drip. My wife took it very well, she has been around cruisers enough by now.

Since then I replaced it with the ebay m11x1.0, it has seeped ever so slightly, but nothing more and I have put 500 miles or so, with lots of freeway driving.
Sorry for the long post. I havent had a problem since the replacement that I know of.

For the drain I was in a time crunch and didnt want to spend more money so I used the drain hose/bung from JGS and then just 1/2 pipe as it threaded onto the drain supplied, its not fancy, but it was like $5 and works well.
Hope your kit works out well, its well worth it! 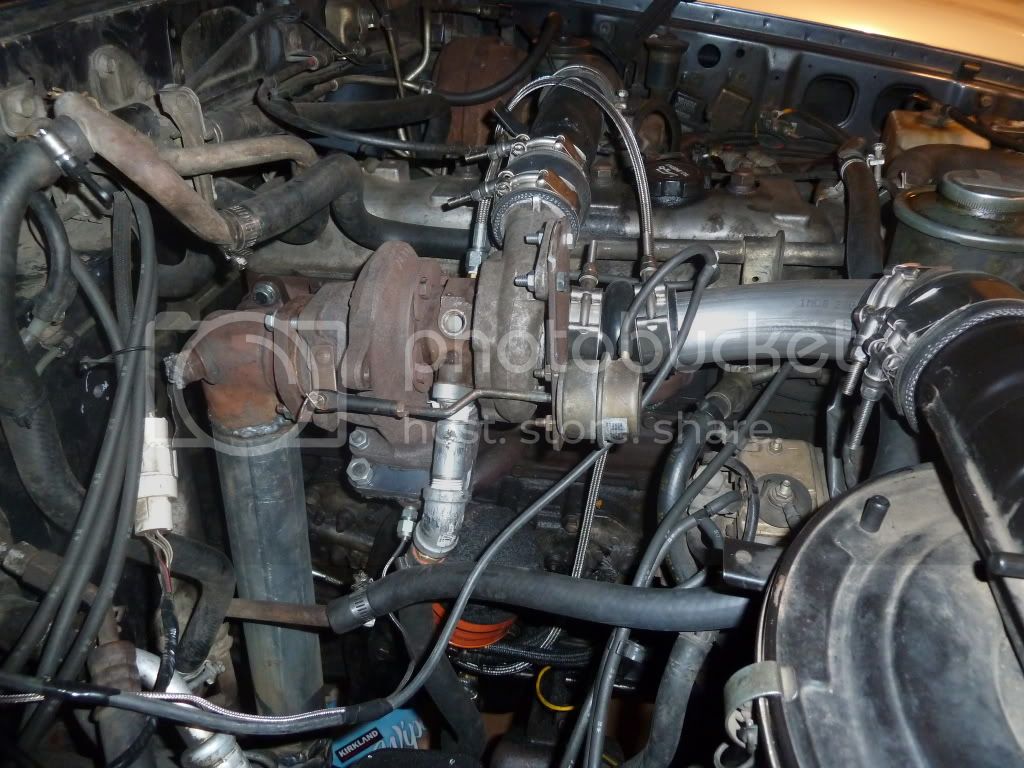 thanks for the input so far guys..

i see that summitracing sells the right fitting size made by Russel.. they are aluminum though.. i dont know if thisis a problem or not using these..
with some of the turbos i see at work they all need a brass/copper washer beween the fitting and the turbo for it to seal.. some are banjo bolt style and others use a jic type connection..
i checked with all of the performance shops here in town today and no one knows nothing other than t3/t4 stuff or other "common" turbos.. i still have to check with three diesel shops tomorrow...

i found a great website today that would take care of everything but they dont ship to canada.. i do have friends in the states though that i can ship to and then they can ship to me hopefully..
i am just checking out frozenboost right now..

i am hoping diesel42 can chime in here as well.. i suppose i can just pm him as well...
L

I've never heard of not using an oil restricter on a Garrett turbo, but I haven't read up on it in a while.

As for the fittings, I've had pretty good luck finding odd sized JIC fittings at MRO Stop but their search feature is terrible and stuff took two weeks to arrive.

I got my banjo fittings at the local hydrolic shop. Although 1 of them was from russel. I also run a restrictor (Had oil blowing past the seals when cold without it.)

Japanese tractor parts departments often have an excellent supply of metric fuel and oil fittings. I get mine from the local Kubota tractor dealer.
T

Look for a hydraulic fitting supplier in town. We have Fluid Connector Products locally so thats where I go. Ask them for a M10x1 O-ring to -4 JIC Male. Ditch the O-ring and replace with a copper washer and go. Should be around 5 dollars and its steel.

Here is the Parker number- 4M10F8OMXS

you guys are all great.. this really helps me out.. i appreciate all of your responses so far..
i saw the oring fitting from Parker online and wasnt sure if there was enough shoulder on the fitting to have a copper washer on there to seal properly.. .. if this works than this is great!! i appreciate the help.. i feel i have definitelly overthought this all a bit..

i just have to see now if there is an easy way around the oil drain now.. so far my options are to buy one off of ebay from a guy out of the usa..

fj-rankenstein said:
i just have to see now if there is an easy way around the oil drain now.. so far my options are to buy one off of ebay from a guy out of the usa..


What about building one? There not that special, just a plate with three holes and a tube welded to it. Go wander around a junk yard if possible, you might be able to find one that can be modified to work(drill new mounting holes).

ThreeEyedBandit said:
What about building one? There not that special, just a plate with three holes and a tube welded to it. Go wander around a junk yard if possible, you might be able to find one that can be modified to work(drill new mounting holes).


you are very right.. i am just being lazy.. actually its not even that.. i have a rear bumper with tire carrier build on the go right now with a fuel cell install and a toybox and a roll cage for my 45 that all need to be done by mid july so i thought it would be easier to buy the parts rather than make stuff.. but for the 1/2 hour i should just make this...

I used two of these for my t3 (drain and oil feed) : Vibrant Performance ::.

Not sure if they have one to match your turbo?
F

Toshi38 said:
I used two of these for my t3 (drain and oil feed) : Vibrant Performance ::.

Not sure if they have one to match your turbo?
Click to expand...


i ended up buying a few things from vibrant but they didnt have oil intake fittings/drain flanges for the gt2052..

Ah I wasn't sure if any of them crossed over... there was another company too my parts guy mentioned but I forget the name...

Have you checked ebay?
F

Toshi38 said:
Ah I wasn't sure if any of them crossed over... there was another company too my parts guy mentioned but I forget the name...

i think i have it under control.. i will post all of the link to where i am getting everything.. i went to one of my local hydraulic shops with that Parker number in hand given by Threeeyedbandit and they had 3 fittings in stock so i bought two.. they were under 9 bucks a piece and i got the copper washer for free.. thanks for that tip.. that fitting is perfect..

as for the oil drain flange, i was going to make one but then i found what i needed on ebay.. i will post the link soon... i dont have it handy at the moment.. i ended up buying two versions of the oil drain because they were cheap... one version had a 5/8 nipple (16mm) and the other had a -10 jic fitting.. i bought both just to have the option to see what i like better...

so, once again.. thanks to all of you for helping me with this.. i really appreciate it..

post up a list of all the parts you used, part numbers and where you bought them from.
okay?

For the weld in bung for the oil pan drain I just got it at the same hydrolic place I got the fittings (I ended up getting new fittings as the Russell ones weren't the ones I ended up using.

Some of these parts may require the older British Standard Pipe-taper--I needed one for my oil sending unit. Go to Plews & Edelmann--www.plews-edelmann.com. Take a look they may have what you need.
You must log in or register to reply here.

What is it? Pressure line coming from the center of the turbo crossover

R
What size thread/fitting for 3B diesel oil port?