So in my continuing quest to try everything I can with my new favorite thing,,I towed a buddys broken jeep (go figure) about 80 miles to another friends house to begin repair. I rented a tow dolly from uhaul, and broke out the tow straps and comealong and got it hooked up, put transmission in power mode, and took of down the freeway. I must say that at cruising speed I didn't even notice the 3000 lb jeep, stopping took a bit longer and starts I could really tell it was back there. over the two mountain passes involded I kept speed at about 50mph with the o/d off cruiser did great, I have been testing a fuel addative a friend helped develope and got 12.5 mpg. I was cruising at 65mph on the flats never went over 70. The best tank I got before the addative was 12 flat babying it around back and forth to work and store, and a quick road trip to the same destiation as the jeep delivery during my stuck addventure, I got 11 with it ideling for roughly 3 hours and lots of heavy pedal usage on unleaded gas, more to come on the fuel addative.. With the weight of the doly/and jeep it still sat prety level, sorry the pic from the side did't turn out so good but here is one at the drop off.. 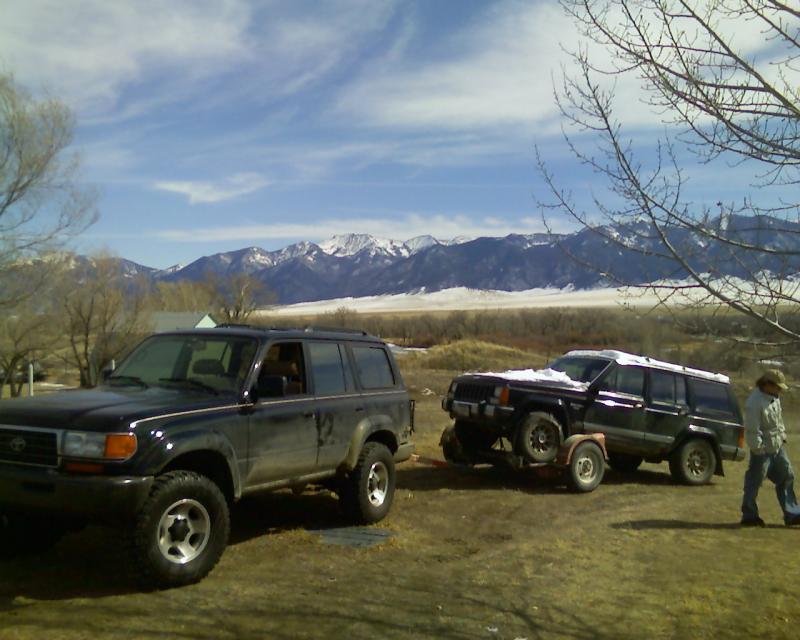 The last 2 times I towed with a rental from U-Haul it was cheaper to rent the dual axle auto hauler than the dolly. Although the trailer was heavier, it was easier on my brakes because the trailer had its own brakes (activated by the the slowing of the towing rig), an ingenious system. The most trouble I had was chaining up to get down the hill in my town to the highway. We had about 5 or 6" of snow and the local roads were packed snow. Once I got on the highway, it was mostly bare pavement, so I pulled over and removed the chains. My towing sounds pretty similar to your experience. That's one of the things I love about my 80 - versatility!
H

I thought about using the car hauler, but I wanted to start small, I didnt mention but I had a bit of a hassle with uhaul, I told them what I was doing and where I was going, on my way back with the empty dolly in tow I saw a uhal, I remember seeing there add that you can drop off at any uhaul so I stopped after 30 minutes of waiting while the guy helped everyone but me he tried to charge me $218 dollars, instead of the $41 That it said on my bill. So I hooked back up and drug it the 70 miles back to where I got it not a big deal just thought it would make sense to put less miles on there dolly I only had it for 4 hours.
7

Yes Sir. Mine serves duty as my DD, mild wheeler, AND tow rig. It tows waay better than most think, even w/the 39's. F'n love this thing! This was the last thing I towed, and the heaviest yet. Did fine: