Hey, guys, I was wondering if other 60 owners have had this problem. A few months ago I bought new brake shoes. Installed them, bled them. After a few months: BENG! Right rear brake. The brake pads lay loose in the drum. I bought a new set of brake shoes. Same day: BENG! Other side. Also renewed left side, put new seals in the brake cylinder and bled the system. After two hours driving the same day (paved and unpaved, but no wheeling and no water): BENG! Left side again.
I got my money back from the shop and bought a new set in another store. They ensured me that these are from the States, so no Chinese. The only difference I see, is that the arc of the new ones fit better in the drums and look like they are a little better quality. As you can see on the picture, it looks like the glue let loose, but... Any ideas why?
Thanx in @vance 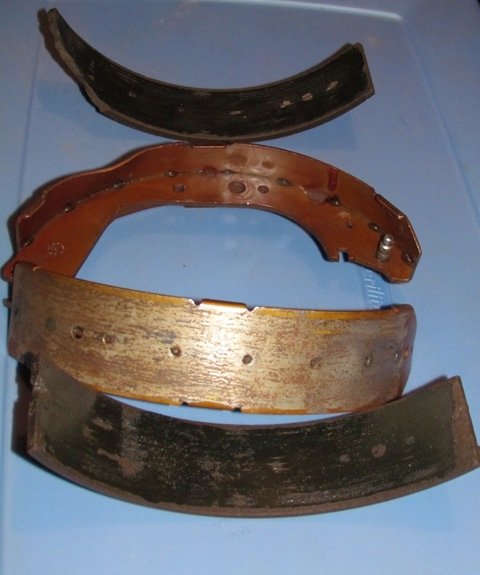 yikes! That can't be fun. Last time i did rear brakes i went with Toyota pads. A bit more $, but hopefully they last as long as the first set.

Sounds like crappy pads - what kind am i going to avoid? (what kind were those?)

sounds like you should have stuck with chinese parts. I'd say just poor adhesive that maybe didn't set properly at the factory. If you got two bad sets in a row i'd say that company would have done a whole run of those. Any idea what brand?

I've seen similar things happen to motorcycle drums but not on a cruiser yet.

Brand doesn't matter, as our poor friend from SA is stuck wading through lots of counterfeit parts. Even parts labeled OEM are not to be trusted on face value.
x2 on just being crap materials.
Wim, by the way, how far are you from Paramaribo?

Wile E Coyote said:
Brand doesn't matter, as our poor friend from SA is stuck wading through lots of counterfeit parts. Even parts labeled OEM are not to be trusted on face value.
x2 on just being **** materials.
Wim, by the way, how far are you from Paramaribo?
Click to expand...

Yeah, I think it's the materials. I just tried the brakes out with just the left rear shoes changed to American brand and I already feel the difference in braking power. Tomorrow I'm gonna do the right side, because now it's raining jaguars and monkeys (tropical cats and dogs) and I don't have a garage. I'm really sick of all these Chinese fake parts. A team of Dutch specialists traveled all over the Caribbean a few months ago to check how big the percentages fake brand parts are. Suriname ended on place one with 80% fake! Car parts, washing powder, watches, soap, everything!

By the way, these new American brake shoes go by the name Wagner? Sounds familiar?

How close to Paramaribo? If I could fly, just about 5km's. It's a little village east of Paramaribo. If you use this link, you'll see our house. And our land (room enough, or nt?)
Google Maps

I'd like to pick your brain one day in hopes of finding the little compound we (US military) made down your way back in the early 90's. My memory is failing, but I don't think we were much more than an hour from Paramaribo in one direction, and a large airport in another. It was next what I was told was a former Dutch military camp. We built it for "Operation Distant Haven" which was in response to all the Hatian and Cuban refugees trying to make it onto US soil for asylum.

What?! You Americans wanted to dump Cubans and Haitians on Surinamese soil? Shame on you!
I'll see what I can dig up about that camp, when I have the time. Was it a 'fixed' camp or just some temporary militairy playground?
I know the Dutch camp you're talking about. It's close to the airport. Do you remember more details about the place? By the way, if you were there in the 90's, how old are you that your memory already is beginning to fail you?

Hehe, it was a fixed camp. Several permanent building, but many just hadn't been used in 25 years or so. If you know of one close to an airport, that's likely the spot. As i think about it more, the camp was minutes from the airport. I should see if the pics I have shed any light on it for me. Where is the airport in relation to Paramaribo? I'd say it was to the south/southeast?
I also did some work at the US embassy, stayed in the Krasnapolski hotel, as i recall. Some of us guys got suckered into buying the freeze-dried piranhas in the hotel gift shop.

The airport is about 50km's south of Paramaribo. Just passed by this weekend, when we went to a savanna in the west.
The US embassy? Been there. You American tax payers paid for the total rebuild of the road along the Embassy, because they were afraid for terrorist attacks. In Suriname! Okay, I know it has happened in Africa too, but here... Two funny things. The embassy wanted to buy the neighbouring house, for safety reasons, but the owners, quite poor people, refused to sell it, although they would have earned 60 year salaries with the sale. And second, the embassy is guarded by Surinamese guards!
'Look, a terrorist.'
'Where?'
'That guy with the beard.'
'Don't tell anybody, it's time for my siesta!'

By the way, I don't like the freeze dried piranha's. You can't eat them.

There's a reason why Chinese parts are less money and it's not just because they pay their worker's little money.

Anywhere I can, I steer clear from ANYTHING Chinese except food and women.

JLH911 said:
There's a reason why Chinese parts are less money and it's not just because they pay their worker's little money.
Click to expand...

I know, but a lot of times I can only get Chinese parts in this country. And if I have to choose between no driving or buying Chinese parts, I choose for the latter. And it's going to be a little expensive to import everything from Europe, Japan, Australia and the Ustated Nights.
If you call 'China!' in this country, the whole country falls apart

Methusalem said:
I know, but a lot of times I can only get Chinese parts in this country.
Click to expand...

And therein lies the problem...we sometimes don't have a choice and that's not cool. I'd rather pay more for OEM (Toyota) parts than for some part that I'll need to replace in a year or two.

Don't get me wrong, there is a time and place for those kind of parts but they're just not on my FJ60.