My new MetalTech sliders arrived yesterday and I'm going to install them on Saturday with the help of two grandsons. Awesome to have drooling 15-year-olds who desperately want to drive your truck! Actually, who want your truck... I keep telling them I'm not going THAT soon.

I'm wondering how much to cinch down the nuts on the U-bolts. Any suggestions on torque specs would be very helpful. I just want to set my torque wrench and start cranking 'till it clicks.

I'm curious too. I got mine recently and put them on but got them tight. Don't know the torque spec. I think u bolts conformed a little bit to the frame rail too as it pulled taught.

When I out mine on, I used two Jack stands with a cloth over them and a floor Jack. Had some help lining them up and then I got the bolts started on the u bolts. Once that is done, it's a one man job.

You can use the Jack to get the incremental help you need and hold it up against the frame rail. Also helps to get the height.

Now, as to why you probably can't use a torque wrench... There's not enough room down there. I believe on the lower nuts in the front and middle, a ratcheting wrench is your best bet. Otherwise you run the risk of getting your socket stuck on the bolt and sandwiched against the leg of the slider.

I took mine town tight but don't think I over did it and still think a few of the u bolts conformed to the frame a bit. Could be an optical illusion though. I guess you don't really want any play in the mount because of you slam it against a rock later, that play could bite you in the back.

Curious to see other people's thoughts

For the record, I don't think they have any torque specs but I could be wrong.

And also, don't forget to move your brake lines on the driver's side. Don't want anything in between the u bolts and the frame to pinch. 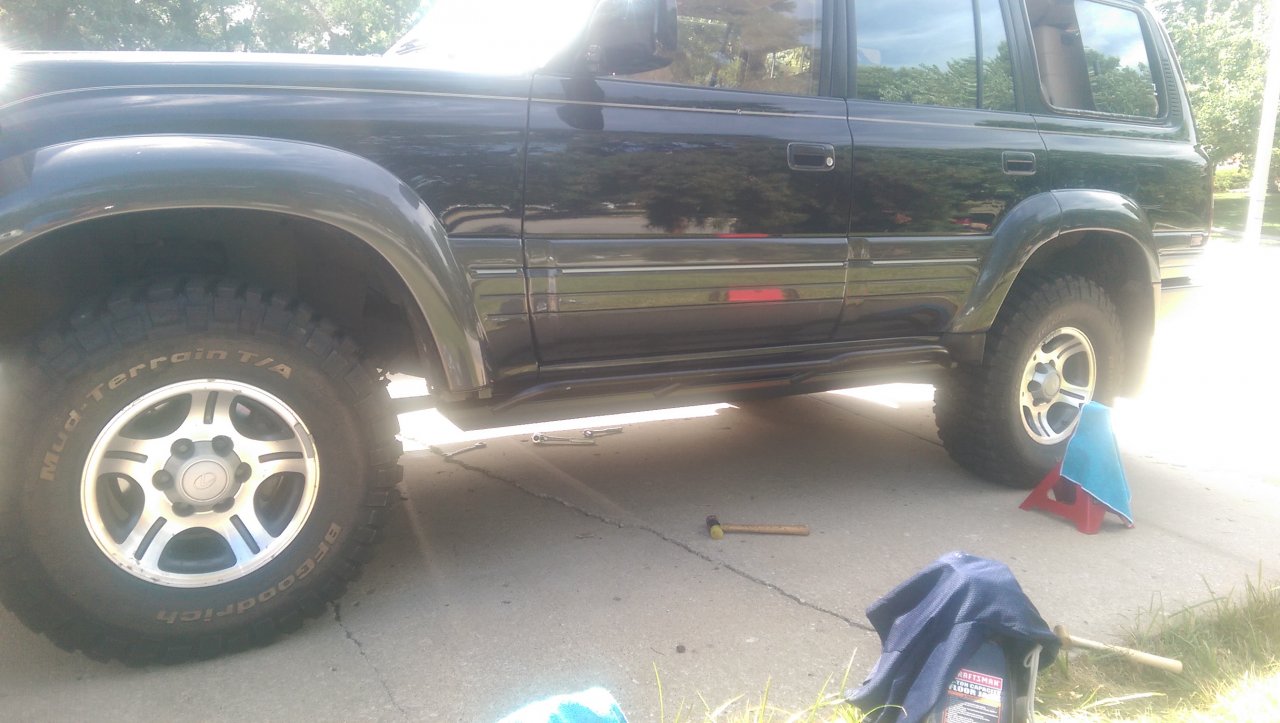 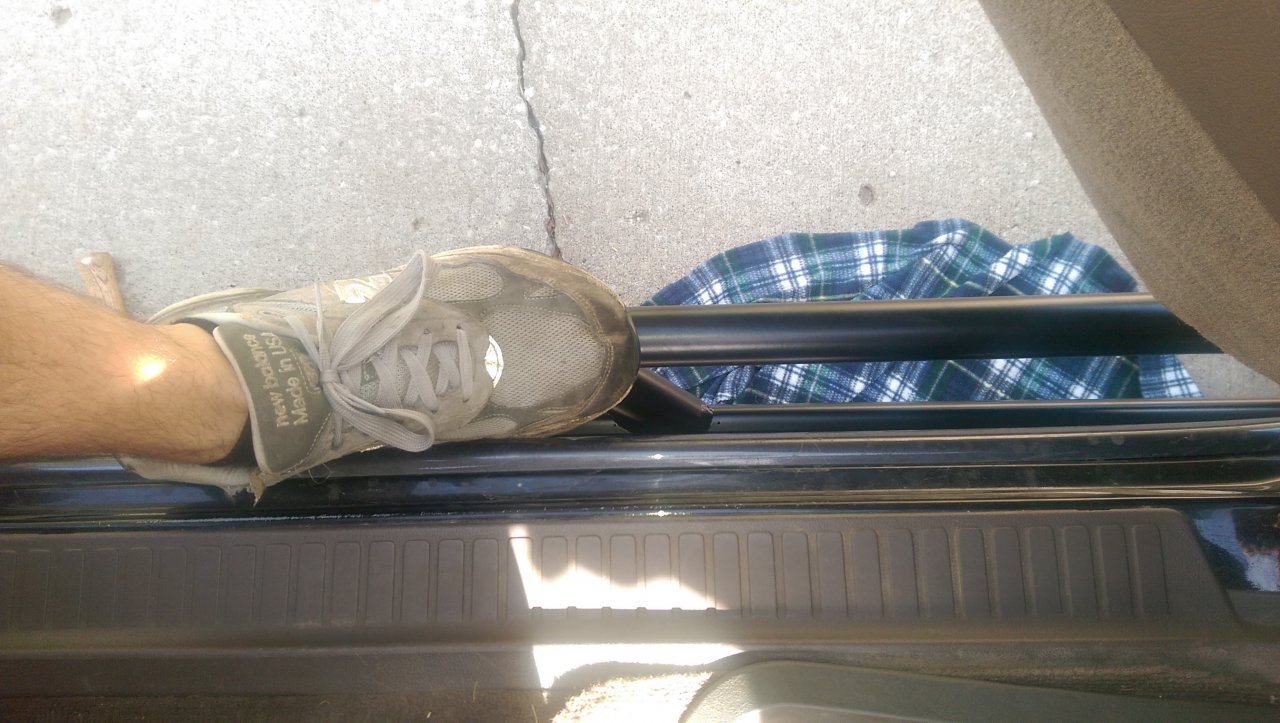 Torque for the MT sliders I put on our LX recently is 'Chevy-tight'... not much room for a torque wrench. Fiddling with the brake lines took a bit.

I went with as tight as I could get them with a standard length 1/2" drive wrench. Been fine for 120K.

Tighten it down until you break it off, then back it off a half-turn.

Hard to explain... I happen to drive a K5 Blazer, though

Plan on the LX is to drive it a while as is, then go back to tap the u-bolts a bit back and forth, see if anything moves, tighten if necessary - or wait for rock contact, then re-evaluate; whatever comes first.

I remember asking Metaltech about this when I got mine a few years ago. The consensus was that the long-shank nuts they provide don't need to be cranked down very hard at all in order to get some serious clamping force. "Medium-tight" with an 8-inch long ratcheting wrench has worked fine for me.

Seriously, though... What size and type of U-Bolt is it? Torque is frequently set by the size of the size and grade of the bolt. I am guessing that these are 1/2"-13 grade 2 bolts. If so, then see the following chart. Unfortunately, I couldn't find anything for a grade 2 fastener, so use the rating for grade 5 and reduce it by 20% to 30%.

I've had to remove my driver side OPOR slider several times. I don't know how tight they're supposed to be but its not very tight. The 3rd time I put the slider back on the threads were history and could only get the nut on the bolt about 1/3 the way. There's no way to get a 1/2 drive tq. wrench up in there but maybe a 3/8". I'd say medium tight or about 40 ft/lbs. I went about tight tight, or 60ish ft/lb , and it destroyed them. I had to order new bolts for my DS slider but luckily MetalTech sent them to me for free.

lfd, why did you have to take them off?

Once they're on, regardless of spec, they're good to go, right?

BILT4ME said:
Tighten it down until you break it off, then back it off a half-turn.
Click to expand...

Or you could use the German method, gutentite

Haha now you guys have me worried mine may be too tight...

rockstate45 said:
Haha now you guys have me worried mine may be too tight...
Click to expand...

rockstate45 said:
lfd, why did you have to take them off?

Once they're on, regardless of spec, they're good to go, right?
Click to expand...

The DS was built wrong and was hitting the body.

Okay, I get it. After careful consideration, I believe the consensus is: tight.

I guess once they're on as tight as a 1/2" drive socket will take them, where they gonna go, right? I won't forget the brake lines. Thanks for the reminder.

Also just arrived: New flares from jamisobe and IPOR skid plate. At last, the mountains of duct tape can come off the DS front flare. I wuz gettin' kinda used to the look...
Yea, I'm stylin'.

Thanks, all, for the tips.

LFD2037 said:
The DS was built wrong and was hitting the body.
Click to expand...


Ah okay, that's what happened to mine too. I'm surprised you got yours on... mine was so far out of whack, it wasn't gonna work at all.

I ended up refunding mine and going with the MT sliders.

Post up a pic of yours if you get a second.
You must log in or register to reply here.