Hello everyone, finally got my caster situation worked out and the sled runs down the road straight as an arrow at 70-75mph. Now to my question: Has anyone used, heard of or had any luck with "TLC's Monster Brake Calipers"? Now that I'm running 35's my braking is a little weaker. Thinking of revamping the calipers, so naturally I thought I'd ask the experts. Any comments, insights or wisdom are much appreciated.

did you make that up?

you can bolt on bigger calipers from v6 4runners. the only difference is that the LC calipers have small+big pistons, the v6 ones have big+big pistons...far from monster 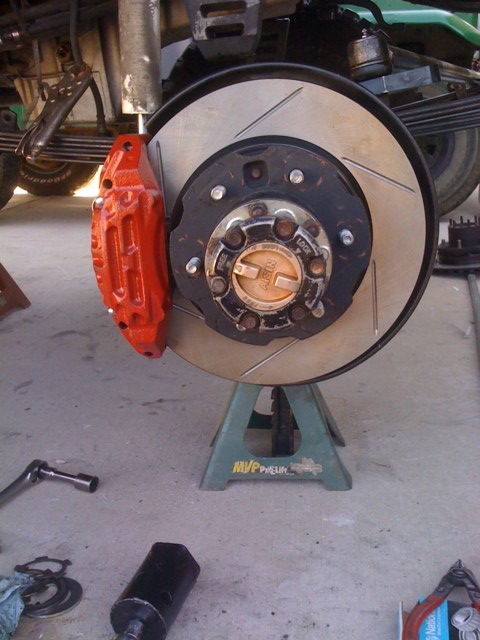 Make up which part? My quote or my question? Thanks for the information.

Thanks Kling-on...I'll research some threads on the 4Runner Calipers

I did the TLC calipers (actually made by SSBC) years ago before the 4runner swap was common. They are bigger (4x40mm pistons) than the 4runner calipers but the pads rattle a bit. They do get it but for the money I'd do the 4runners. I would if I had to do it again.

sorry i did not know such thing existed

i used 1990 v6 4runner calipers, had to cut a bit of the dust shield. didnt notice that much of a difference

There is no magic bullet here, going to calipers with much bigger pistons just starts a cascade of needing other parts that will land you back about where you are stock. I did the V6 calipers, that's about as big as I'd recommend going. Any larger on the piston size and the pedal will become really mushy feeling even though there is no air in the system.

If you want better brakes the calipers aren't the answer. Try some good pads first. Then look into a wider rotor (& calipers to go with). Wider rotors will weigh more (more thermal mass - takes longer to get hot) and have increased ventilation (better fade resistance). The only way to get more brake power beyond that is to increase the line pressure (hydro-boost) or go to larger OD rotors (needs larger wheels to fit).

I've had them for a couple years now, with 31" tires. They work great, a noticable improvement over stock, with no rattling. The pedal doesn't feel real firm, though it never did.

if he goes with the 4runner calipers should he get a t100 1 1/16th master cyl to supply more volume? i think i read that some where but have not done it myself.


NTSQD - With quality rotors, what pads do you use (recommend) ?

Thanks for all of the suggestions.

EUROTECH1986535 said:
if he goes with the 4runner calipers should he get a t100 1 1/16th master cyl to supply more volume? i think i read that some where but have not done it myself.
Click to expand...

No, not really. Changing the calipers to a set with larger pistons increases the leverage of the system. Going to a larger m/c bore reduces the leverage of the system. Increase the leverage too much and you get a soft feeling pedal. That's unacceptable to some folks. Reducing the leverage gives you a nice, firm pedal. Which most folks confuse with being "good brakes." Nothing could further from the truth. The pedal feels good, but to stop at the same rate as someone who did the caliper swap but not the m/c swap you'll need to push much harder than they do. Doing both the T-100 m/c and the V6 calipers results in total system leverage that is less than all stock.

If you like the way that a T-100 stops and how it's pedal feels and want to duplicate that in a 60 series then you also need to transplant the T-100's brake booster and it's brake pedal (unless that pedal has the same pedal ratio at the 60 series - something I know nothing of). Brakes are a system, can not alter one feature without considering at the whole thing.


Spike Strip said:
NTSQD - With quality rotors, what pads do you use (recommend) ?
Click to expand...

So far I've only used what came in the loaded calipers. I've read other posts here by folks who've gone to OE pads and been very happy with the improvement over the generic pads. It would be nice to be able to buy pads from the various racing mfg's and have some idea of their cF vs. temperature curve, but I don't know of any such source for these calipers.

My cruiser stops better with v6 4runner calipers in the front and monte-carlo's in the back with 40's on it than it did with 33's. I have the original brake master with no probs.

There are quite a few pad options out there for the runner calipers. One of the advantages of going with them.

Any ideas one what wider rotor to use (closer to 25mm wide) that would match the runner calipers better?

That would be a nice setup.

FWIW - the pedal distance increased a bit with my TLC4x4 Monster calipers but it isn't mushy at all (with stock MC). With these calipers, Super Blue fluid, stainless brake lines and a properly adjusted proportioning valve my cruiser stops significantly better. Even my wife says so

Doing four-wheel disk on mine with T-100 calipers and MC made for brake performance that would give some people a nose bleed. Absolutely transformed.
You must log in or register to reply here.