Run-out is something I've been look at for a year or so now.

Rotor warp as it's called, comes in different forms. We use ceramic pads (OEM). Which breaking in new OEM pads, is call "bedding in". Not or improper bedding in, may yield brake pull, squeal and or pulse.

Pulse felt in hands, is more of a front braking issue. Pulse felt in seat of the paints, is mostly associated with rear brakes.
Pulse is the pads unevenly garbing high and low spot on rotor. We can also have variation between outer and inner rotor surface. Where the run-out is different from side to side of a rotor.

Improper braking can also "warp" rotor. This can be from over-heating pads & rotor, creating hot spots. Hold brakes held on when very hot, it is believed leading cause of "warp". Does the metal actual change in flatness (warp) or just amount of deposit build up vary. IMHO either or both.

Why do some get pulse after doing a perfect job, dive perfect and all good at first. But then later get pulse (warp). A leading cause is rust! Parked vehicle and water get on rotor (wash, splash, rain, sprinkler, etc.). When we drive rotor are self drying, by rotation. Pads dry when braking. So after any event where rotor get wet, we need to drive to dry. Or the rust ends up cause high spot, even after driving. If rust old been growing say for a day. We'll likely not have issue. But say vehicle parked a week, we may get issues. The likely hood of rust build-up causing issue, increases with time.
Master thread, with index to many helpful links.

Location
RV on the road in the USA

OregonLC said:
I've never had a 'warped' rotor. Why? Because even after hard stops I don't let the vehicle stay static. Even a very slow creep at a light will prevent this. It only takes a few inches to move the pad slowly along. As others have said, it's most likely uneven pad material transfer resulting in spots where the μk is higher on the rotor. The change in friction results in the feeling of pulsation. Sometimes a different pad can reduce this, but it's more about driving technique than chasing different brakes.

That said, if you've not tried Hawk LTS they're really quite good on the 100/200. I'd say 30% reduction in pedal effort and really good braking performance. No increase in dust either.
Click to expand...

I’m suffering from the dreaded brake “judders”.It feels like the abs is pulsing,but strangely enough it seems to come and go and vary in intensity.I’ve read that brake rotors don’t warp and turned enough new ones that seem to have as much run out as used ones. I’m more into the buildup or stuck slides theory.

"Vary in intensity" is sign of warp rotors disk. If brake "judder" is vary's with heat (fiction for braking). OTV (on the vehicle) mechine turning should correct this.

OTV lathe machine turning is the preferred method. As it trues disk surface to wheel hub.

Does turning reduce braking effectiveness, due to metal thinning. YES it can!
But staying within limits set by Toyota, on the 100 series: front is 30mm front, 16MM rear minimums. At or above these minimum thicknesses, will not be noticeable or a problem in normal breaking.

Some say turning reduce life of disk. YES it can!
If to much material removed. But disk metal wears, with use regardless. Less wear if a perfect surface and better braking.
Master thread, with index to many helpful links.

I really found no advantage turning rotors on the vehicle.I’ve been doing brake work for 50+ years and have owned three stationary Ammco lathes and one on the car lathe. I don’t remember “warped“ rotors being a big issue until the 1990’s.I know from a friend of mine that designed brake rotors and drums at a Chattanooga Tn. foundry he was told to make the material as soft as feasible.That may have some bearing,along with the EPA approved glues and materials used in the pads.
J

DBULL said:
I really found no advantage turning rotors on the vehicle.I’ve been doing brake work for 50+ years and have owned three stationary Ammco lathes and one on the car lathe. I don’t remember “warped“ rotors being a big issue until the 1990’s.I know from a friend of mine that designed brake rotors and drums at a Chattanooga Tn. foundry he was told to make the material as soft as feasible.That may have some bearing,along with the EPA approved glues and materials used in the pads.
Click to expand...

DBULL said:
I really found no advantage turning rotors on the vehicle.I’ve been doing brake work for 50+ years and have owned three stationary Ammco lathes and one on the car lathe. I don’t remember “warped“ rotors being a big issue until the 1990’s.I know from a friend of mine that designed brake rotors and drums at a Chattanooga Tn. foundry he was told to make the material as soft as feasible.That may have some bearing,along with the EPA approved glues and materials used in the pads.
Click to expand...

Which OTV Lathe do/did you have?

Big advantage with OTV Lathe. Is not only trues rotor to wheel hub. Which save running-out wheel hub and the disk 5 times, and than moving rotor to best point. Saves most time, when dealing with front wheel hub of the 100 series. As it is not practical, to remove wheel hub 6 times. A good OTV will run-out to less than .002", without the need to remove wheel hub.

The service industry today, seems to see big advantage to the OTV lathe:
Every Toyota and Lexus Dealership shops, I've been in locally. Has 1 bench and 4 or more OTV lathes. So they must see value in OTV. As they cost about $15K each. Snap-on see value, as they bought the leading OTV manufacture.
Master thread, with index to many helpful links.

I had a SnapOn.I just seemed to get a better surface by using a slow .002” finish cut.My last on the car was back in the early 90’s so I’m sure equipment has considerably improved..

DBULL said:
I had a SnapOn.I just seemed to get a better surface by using a slow .002” finish cut.My last on the car was back in the early 90’s so I’m sure equipment has considerably improved..
Click to expand...

Snap-on put their red color and name on the Ammco 800 OTV ( seen in video above, post # 24) at one point. So perhaps you had the Ammco 800.
Master thread, with index to many helpful links.

I replaced my front pads about 6 weeks ago with OEM Toyota parts. I didn’t have time to get into turning the rotors, servicing bearings etc. but I did throw a dial indicator on there to check warpage. As predicted by some, there was little to none. I measured maybe .002” max. 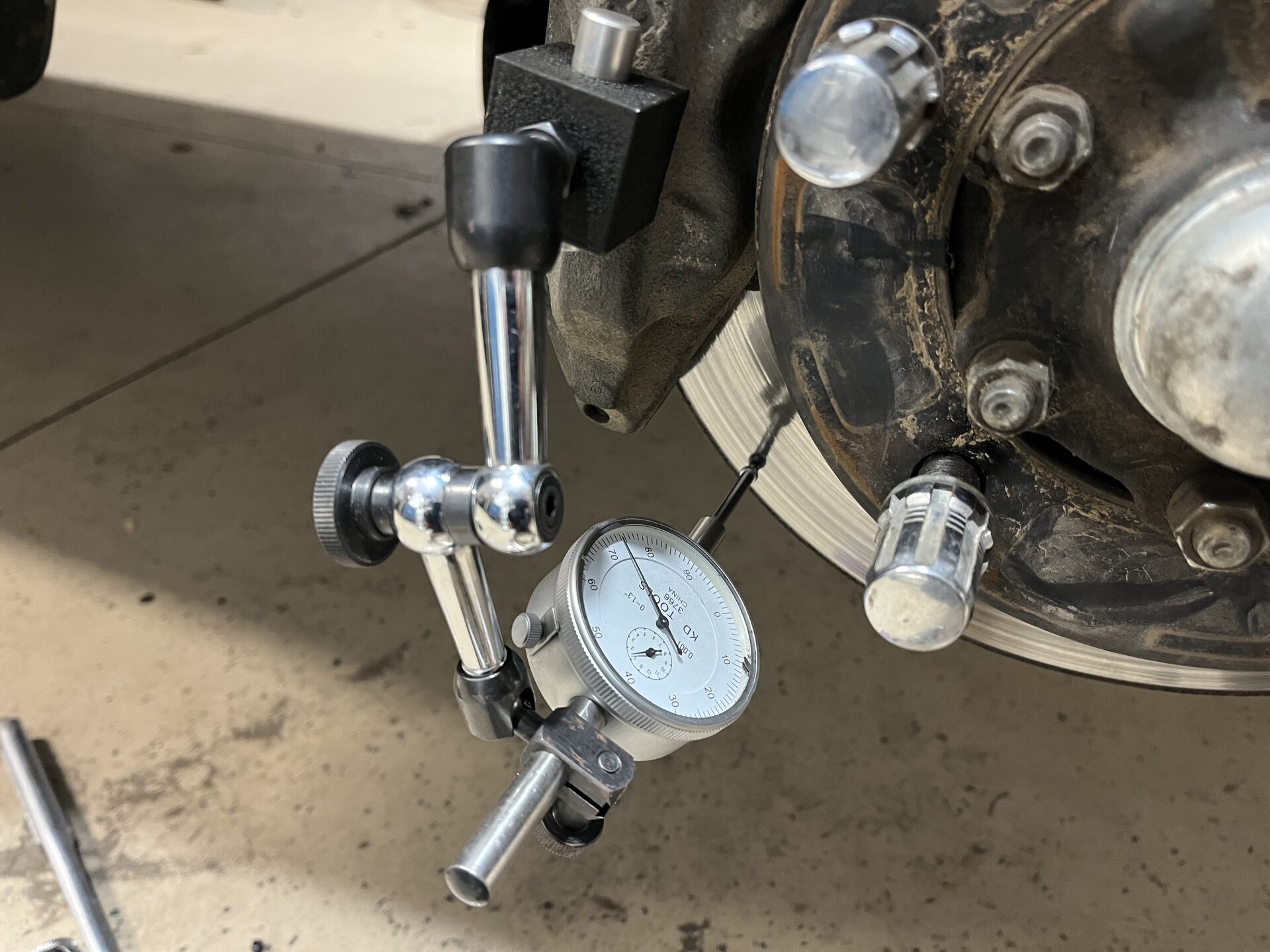 So I removed the calipers and “resurfaced” both sides of the rotors in situ with a 3” Roloc disc. It seemed to help at first but now the brake pulsing is back and still irritating. I guess I just need to service the bearings properly and try to find a shop that will trim the smallest amount off the rotors 🤷🏼‍♂️
2007 LC VX Dual Vibration Dampeners

Definition: Parallelism = thickness variation, between front to back sides of disk.

I've an 03LX, which had server brake pulse. Before driving this 100 series. I noticed the shift gate plastic worn badly. My first thought was, the PO really knew how to use transmission braking to control down hill speed. But man, I've never seen the shift gate between 2nd and 3rd worn like this one.

Going thought the braking system. I found stuff I've never seen before. I may write it up one day, as I learned a lot. One interesting thing was, rear brake calipers on backwards. Really! LH of RH and RH on LH. Putting brake flexible line, coming into the bottom of the calipers.

As I've worked thought the many issues of this 100 series, the most I've every dealt with on any. I ran-out rotors in the processes. All four actually within spec. On my very first drive, once brakes heated with just a few stops. It begin a very violet brake pulse, wherein the whole vehicle bucked. Now I understood the shift gate wear. I found myself downshift deeply for every stop, as I tried to use the brake as little as possible. Often going down to 1st.

I too had cleaning the rotors with pads. But even though my dial gauge shows all rotor in spec, it continued to buck.

It became obvious, this rigs had braking issues for a very long time. The PO apparently tried many things unsuccessfully to correct.

I found these to be relatively new rotor, based on disk thickness. With run-out within spec, on all four. 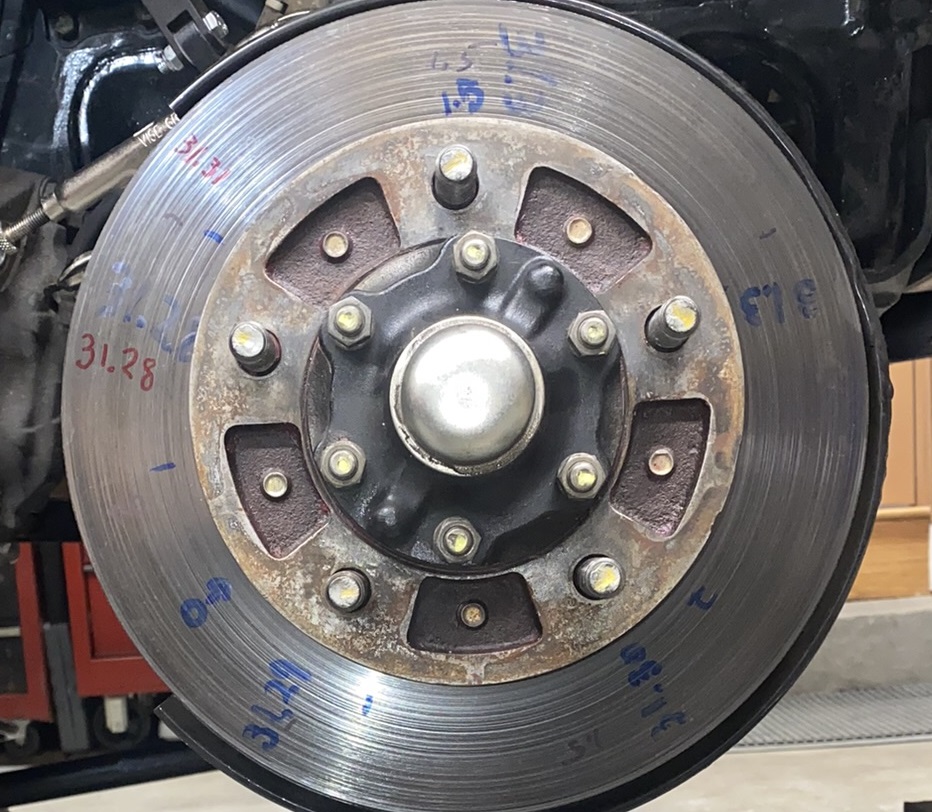 Once I customized and restored my Ammco 800 OTV brake lathe working. I cut the disk on this 03. Finally no more bucking. I took all thickness variation out, complete. Going from the .03" to less than 0.0000" 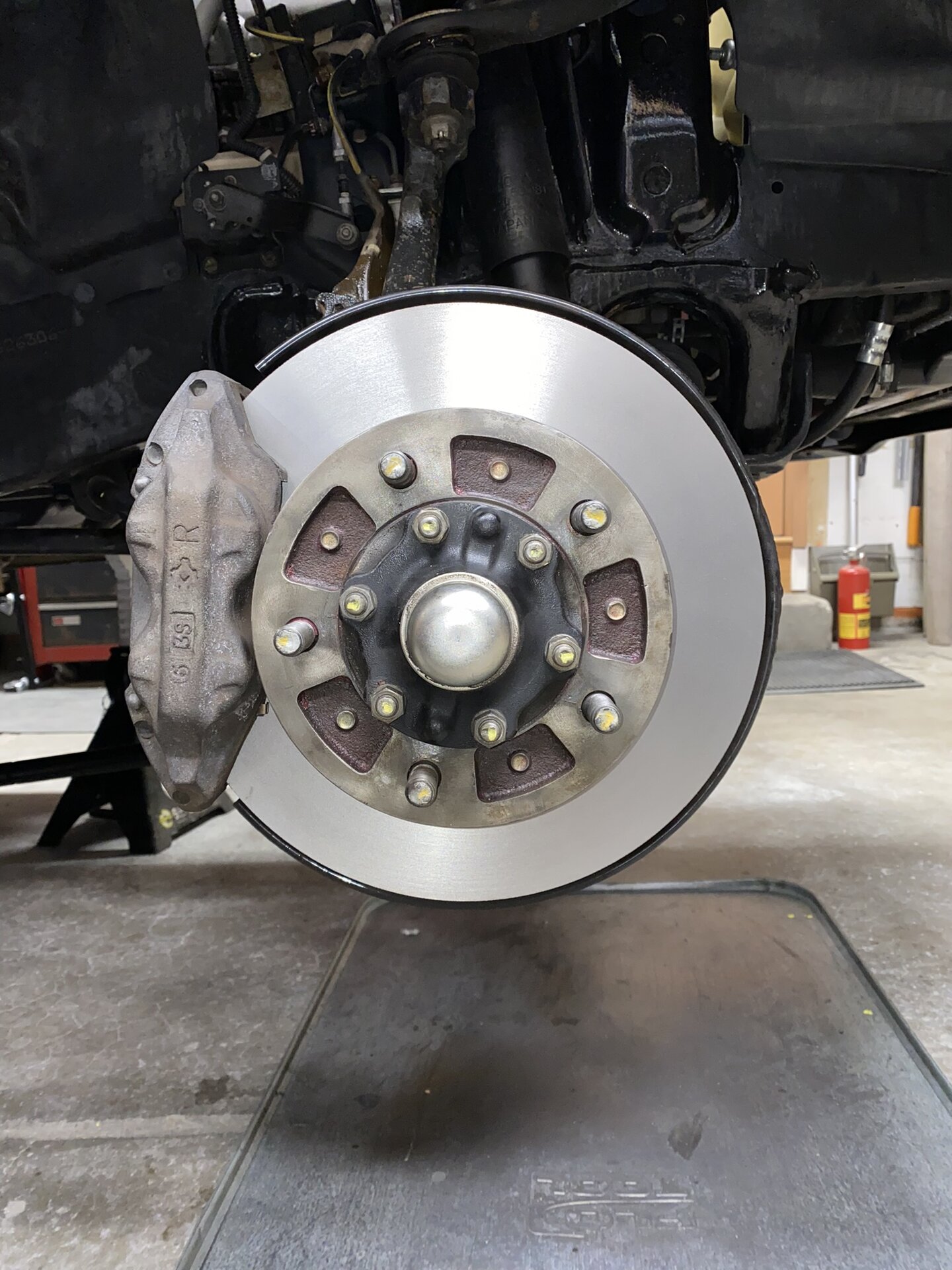 Braking's smooth as can be now!
Master thread, with index to many helpful links.

Braking's smooth as can be now!
Click to expand...

pjabber said:
When can I drop my LX off?!?
Click to expand...


I should also point out a few condition that need taking care of before turning disk on OTV lathe:

With front wheel hubs, bearings must be tight. If any play in wheel bearings, they'll need serving first. At minimum snugged.

Whereas we can just use the OTV lathe, which corrects run-out to vehicle variation (other than bearing play). ie: rust, wrap, etc of hub inducted run-out issues. Best practice is to correct all first.

With rears, we de-scale/rust hub and rotor first. We then run-out the hub. Which includes running-out the axle bearing play. Then run-out rotor disk, and rotate disk to best position (least run-out). If run-out and Parallelism well within spec at that point, we don't need to turns. With rear rotors, we can just replace rotors. It's a judgment call, based on condition. Which includes disk thickness, drum ID, rust, damage, etc.

Also worth noting: If we can see and feel grooving and or spots on disk, when installing new pads. Turning will yield longer life of pads & disks. Also eliminates braking pulling to one side or the other and in some squealing.

Note:
Also the backside of wheel where it butts to wheel hub. Whereas this does not effect run-out of brake rotor disk or turning on a OTV lathe. It does effect wheel balance and alignment. We also run-out the wheel hub. Unfortunately all to often, the front rotor has been improperly remove from wheel hubs. This becomes evident on hub face, in uneven surface at wheel to mount points. In these cases, I restore the hub. In one really bad case hub was damaged beyond restore.

This hub severely damaged beyond restore. When wheel mounted, it may results in false lug nut torque. As vehicle rolls, this damages wheels creating impression, as wheel to hub works to a flush point. Lugs will then be found loose. 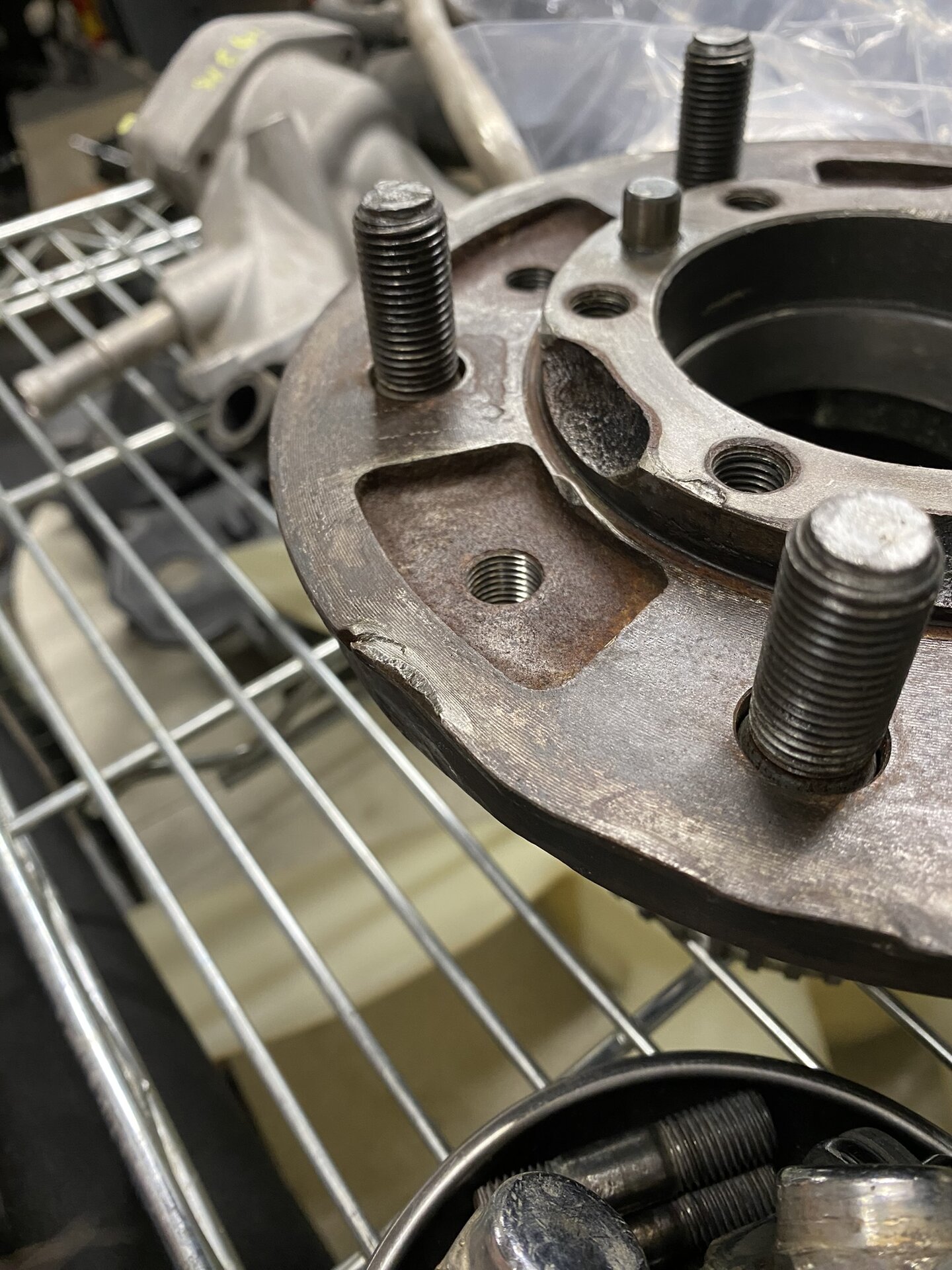 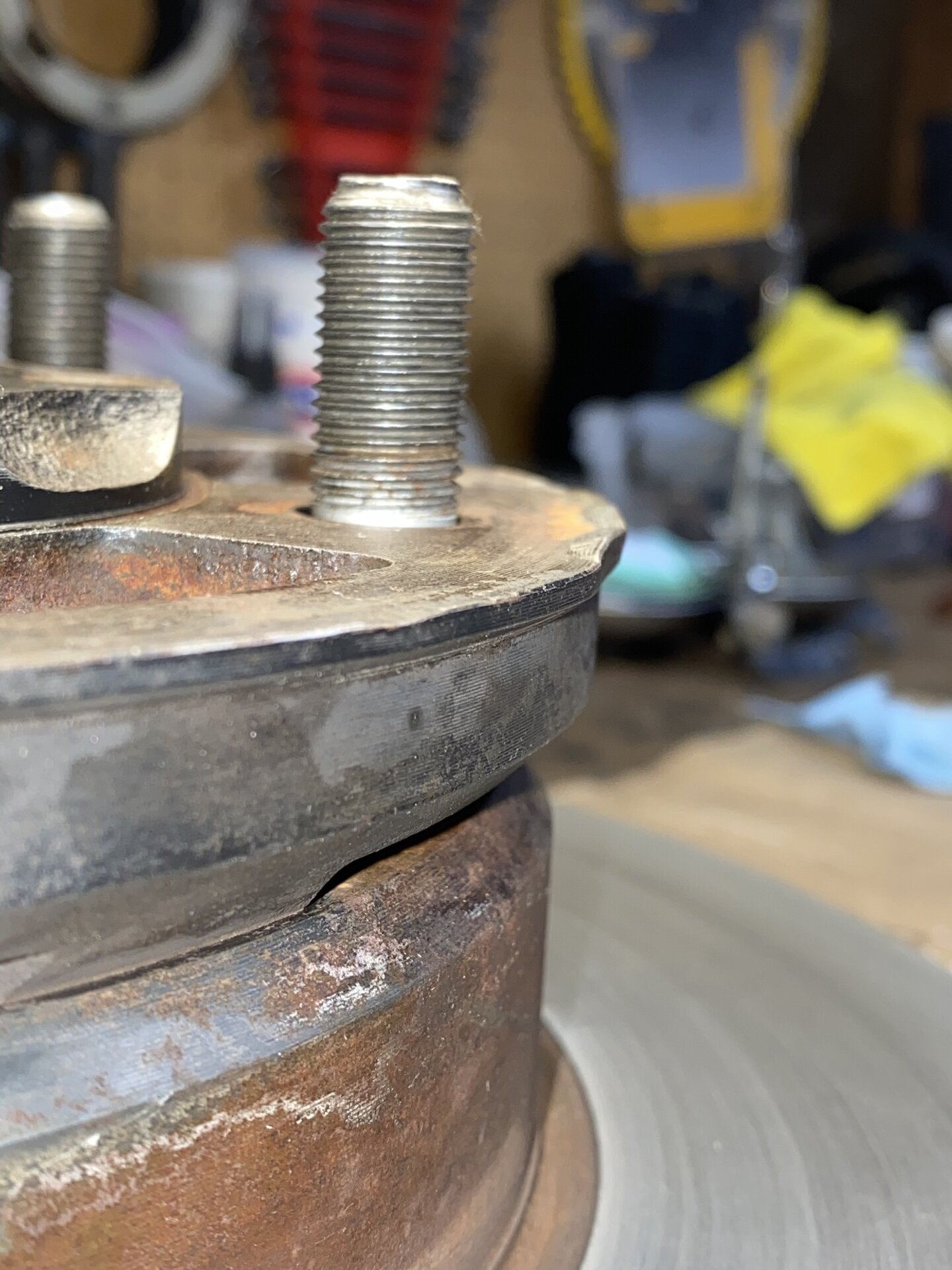 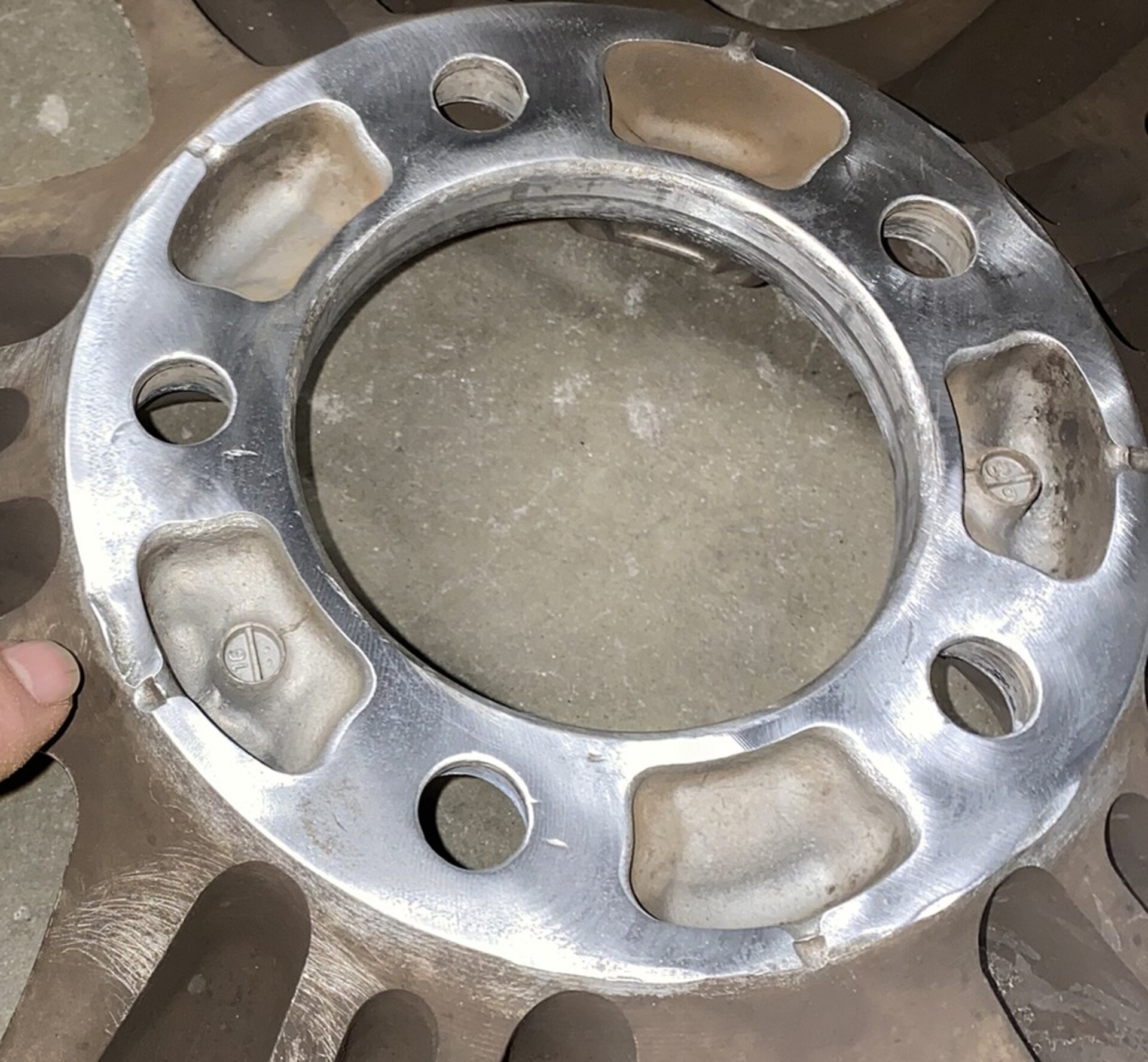 This rear hub after de-scaling, was 0.003" out (.001" out of spec). Which is a bit to much. Likely caused be improper torque of wheel lugs or accident. Spec limit .002" (measurement is actually done axle out and in SST tool). By rotating disk to best position than turning with OTV lathe if needed, we can correct for braking. Toyota recommendation is, to replace axle 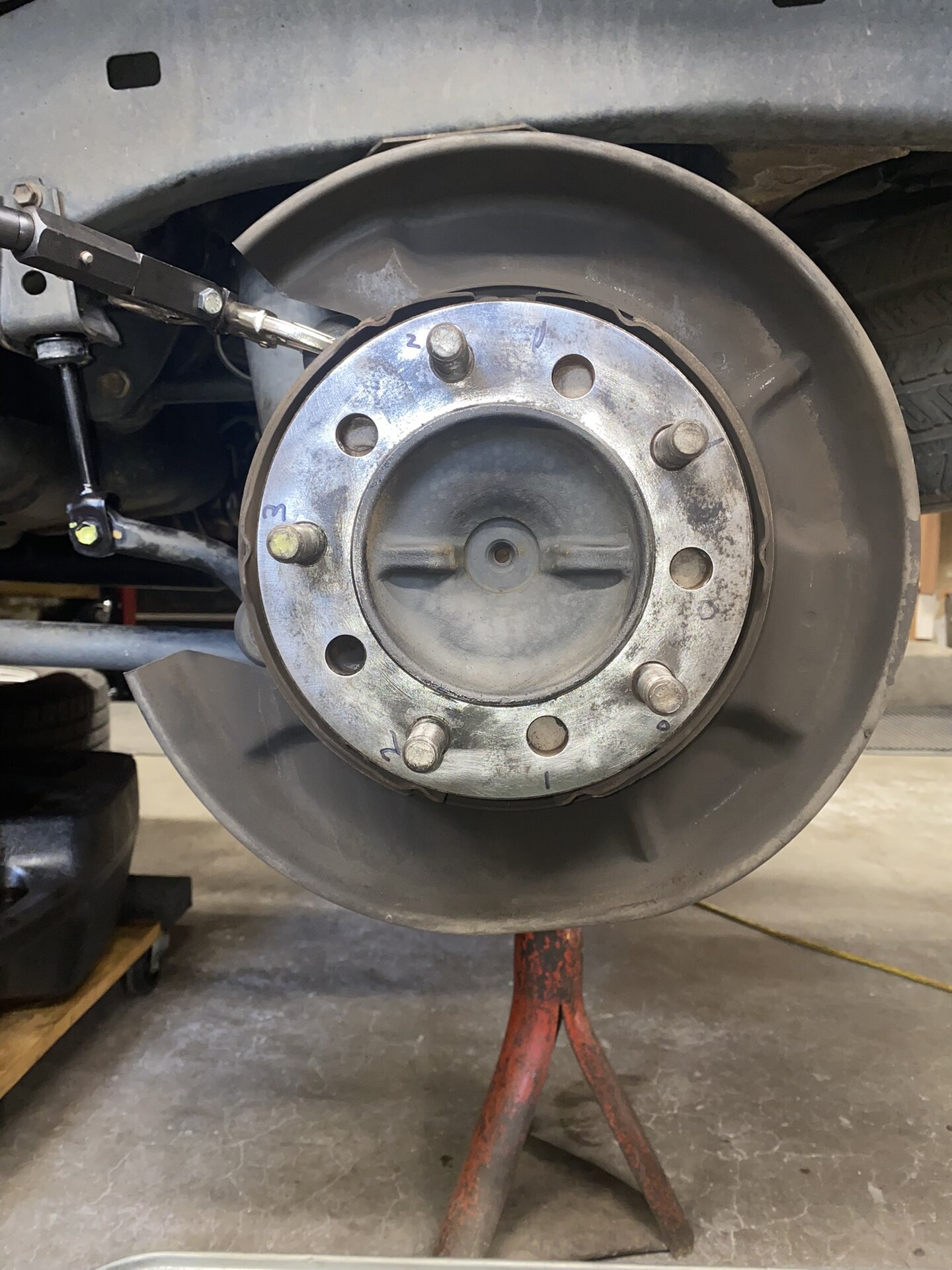 Master thread, with index to many helpful links.

L
Warped rotors or what?

Thoughts on this frame