Hello, I acquired this 2000 LC last weekend. Currently sits with a little more than 242,000 on the odometer. It replaces my 2013 Honda Pilot EX-L (with just 64k, oof!) that was totaled by an idiot on the interstate (she hit someone else, spun, and her rear destroyed my front left quarter panel, suspension, and the killer... the shock tower). The vehicle was our family long-distance trip car. Enough room for kids' bikes, dog in the back, etc.

In case you're wondering about my username, chalk that up to being a teenager many, many years ago and using it on Bimmerforums. My first car was a 1995 BMW 318is, and I have something like 3k posts there, so I have kept the username on automotive forums. I should probably change it, but, here we are.

Maybe it's been this crazy health crisis in the country, maybe I'm just tired of boring Hondas, but here we are. Seeking a bit more adventure. Almost bought a Land Rover Discovery 2 but thankfully ended up in the LC camp.

I purchased this as a learning project for myself and my kids as well as our secondary vehicle to take the mountains/beach/wherever. To conquer all that come before us. To have fun.

Please feel free to explain like I'm 5 and forgive my potentially basic questions. I've always wanted to work on cars, but ... haven't. So here we are.

I'm big on sharing info -- have learned a lot here thus far -- and will try to do my best to document with photos, part numbers, videos, and posts so others can search/find/learn from my experience as well.

What I know has been done and have receipts for:
What I don't have receipts for, but did speak to the mechanic that did some of the work:
Known issues:
What I've done/about to do:
Based on the above, what do you think I'm missing from a maintenance/getting started list?

I'll reserve the next few posts for photos and then help to diagnose a suspension noise I'm having as well as a leak from something right below the glovebox.
Last edited: May 26, 2020
T

(Reserved for more photos, goal of the build)
T

(Reserved just in case I need it)
T

Two Maintenance Items I Could Use Help With:
Suspension Bushings:
Getting started on maintenance, and looking for some assistance on a few noises:
- when I go over speed bumps, kind of a bouncing sound from the front left
- when turning left and hitting an angled up surface (like turning into a driveway with a slight incline) a bit of a creak/thump

I figure noises like that are usually bushings and/or something loose.

This led me to check out the swaybar/stabilizer bar bushings on the front left and look cracked and shot: 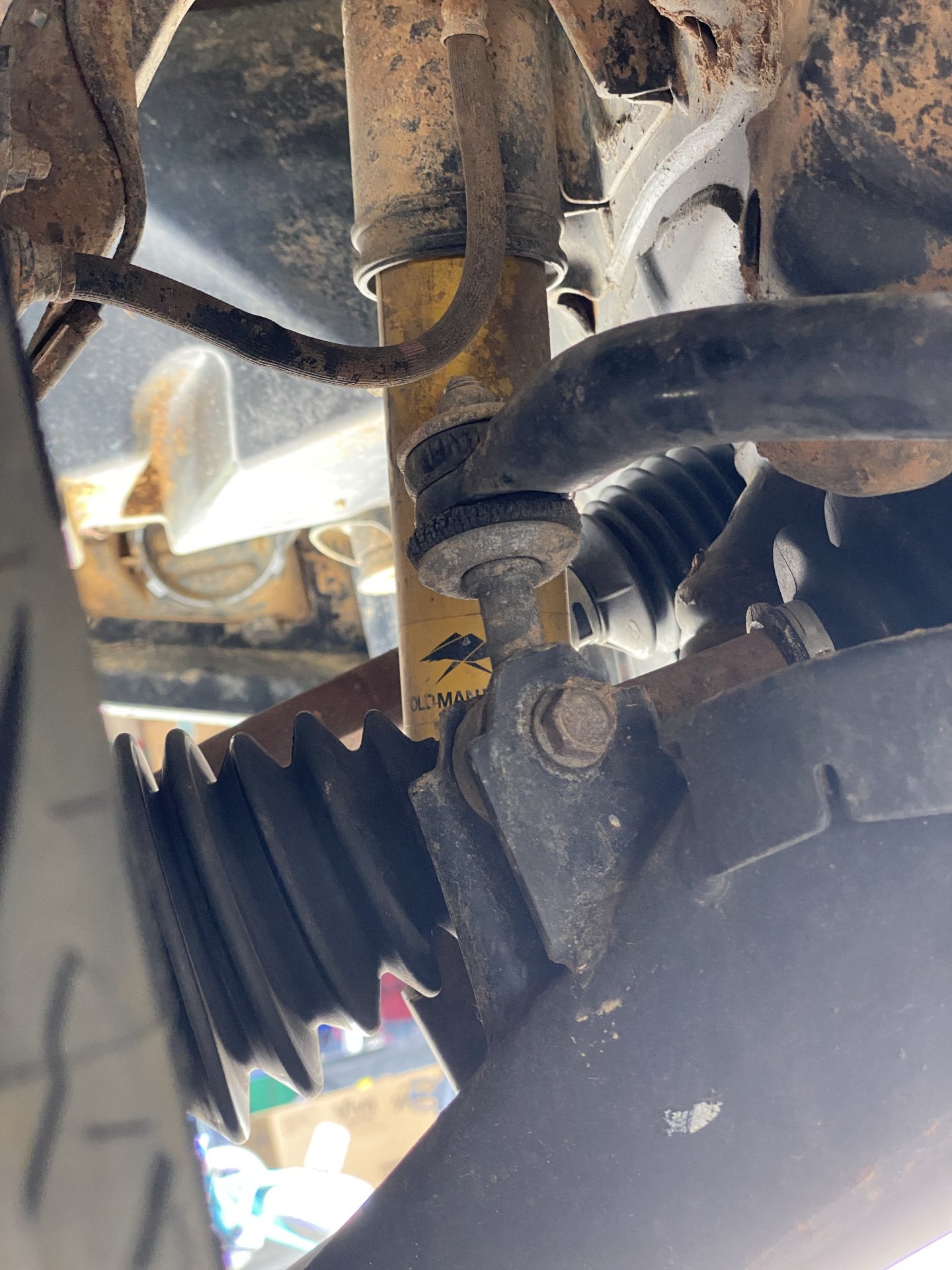 as well as the other bushings for the stabilizer bar: 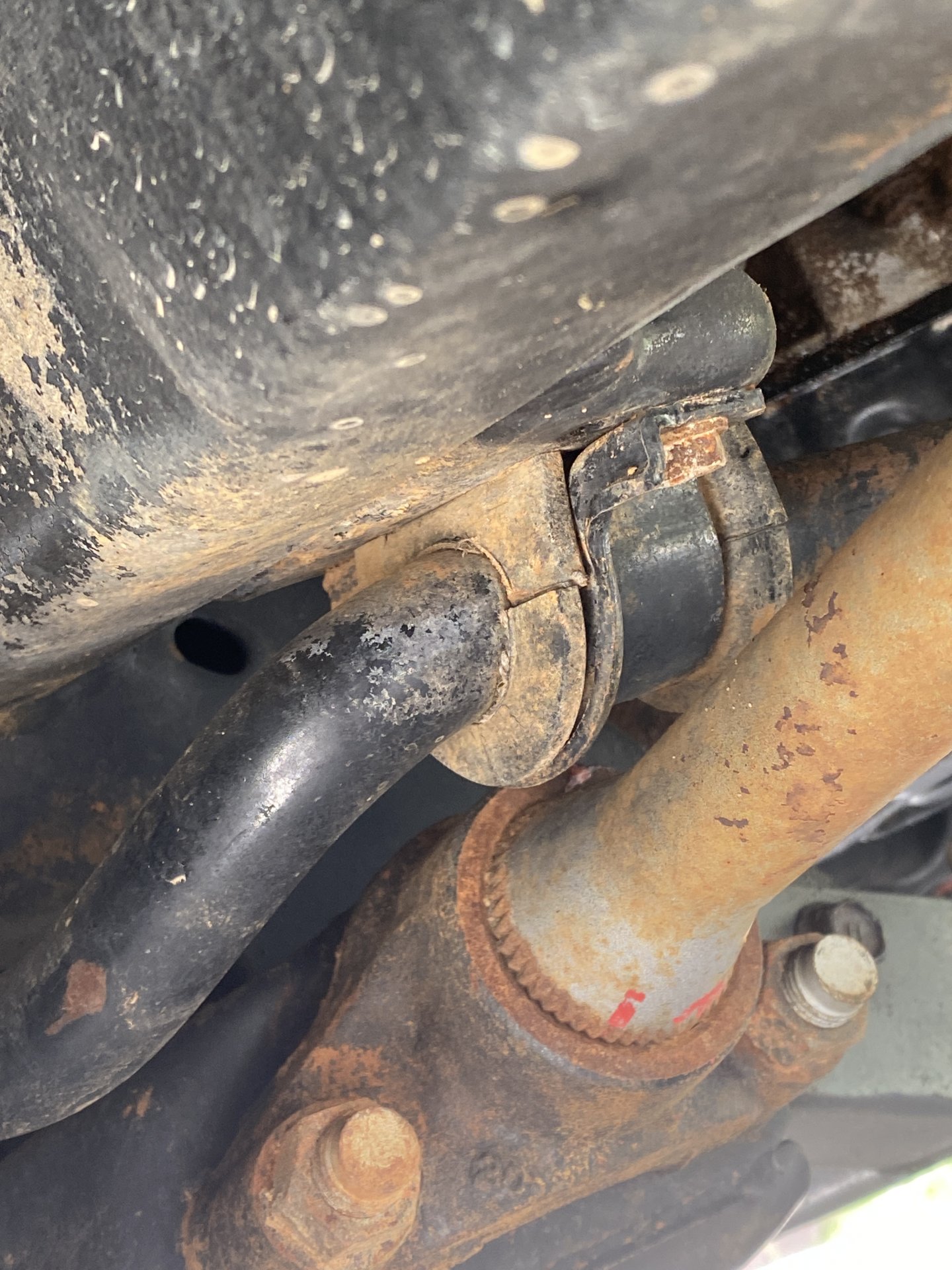 As noted in the for sale thread, this car has been used and seen some clay that wasn't powerwashed off.

I've read this post about a 200k bushing makeover and wanted to get thoughts on the above noises... did some digging on Partsouq and came up with the following list. It includes everything that I can tell for the stabilizer bar and link bushings, nuts, bolts, bracket, etc. I know I might be able to trim a few bucks to buy just the bushings only, but considering the cars history (and above photos) I don't mind to just replace it all:

Questions:
I've also priced out (since I'm paying for shipping already with partsouq):
What's this leaking below glovebox: 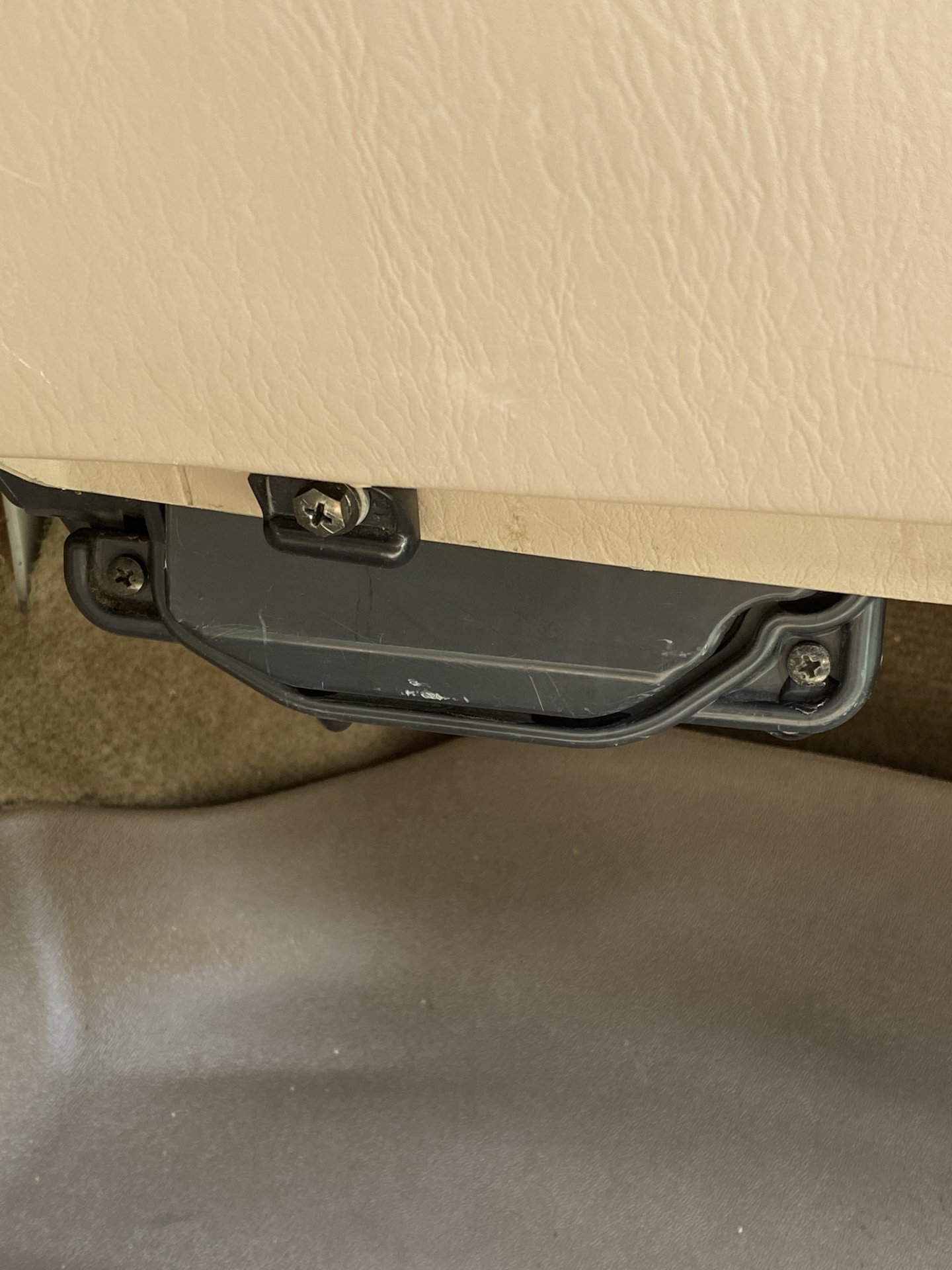 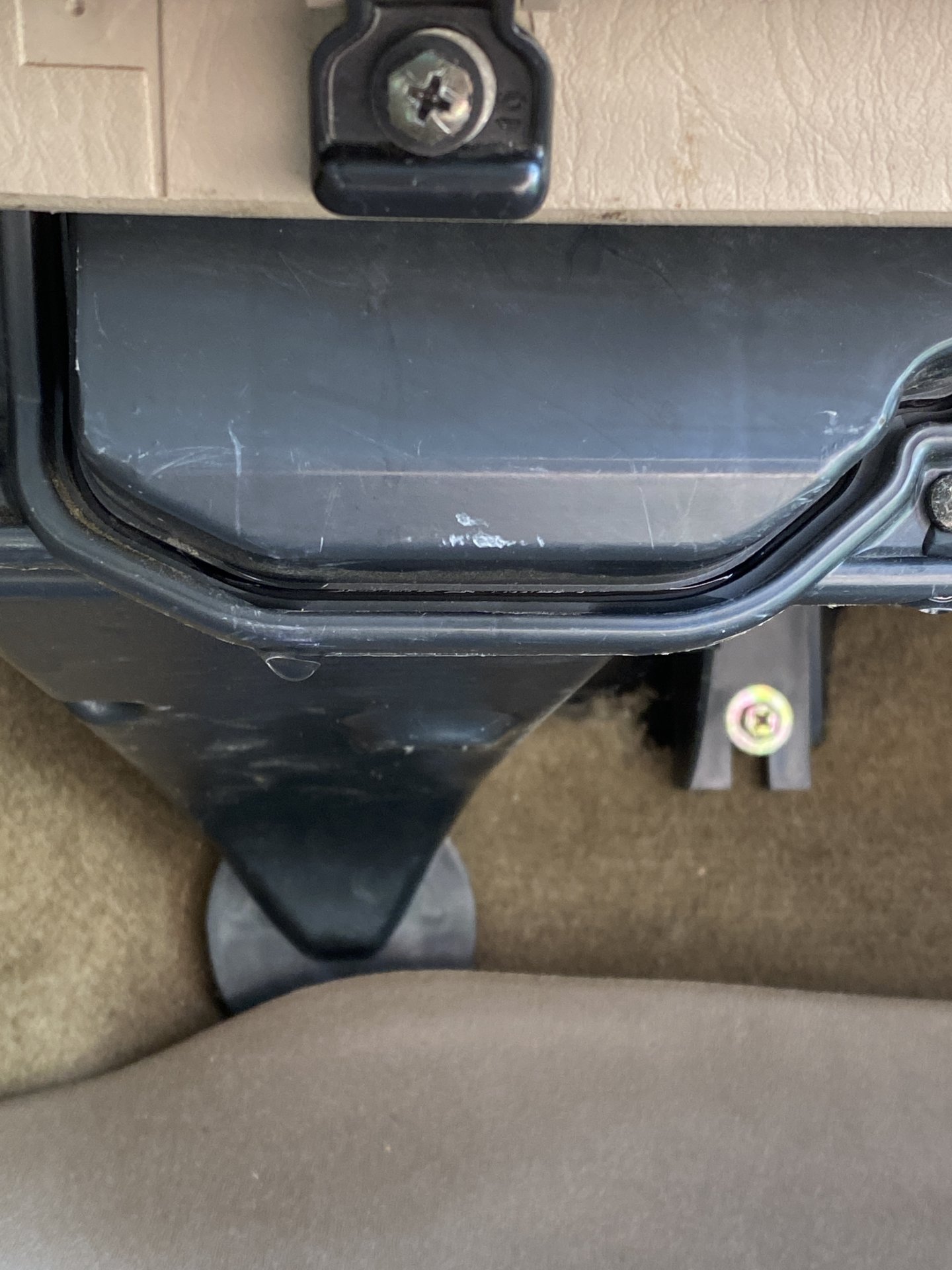 The blower motor is squeaky... the wheel is dirty, I can see rust on the nut/bolt holding the wheel in the middle. Apparently this LC came with or was retrofitted for cabin air filters... which are not there. I've struggled to find consistent information on the filters and whether or not this came from factory this way or not. Cruiserparts appears to have some filters -- $20 -- do I need two (thought I read something about how they stack on top of each other)?

My guess is the above leaking part is... A/C evaporator? Condensor? Saw something on the 80 series forum that was a kit to clean out the system from nastiness that builds up, but no idea. Haven't had a chance to take apart, would love your advice. Drips... I dunno, 20-30 times when blowing AC at full blast. Not a constant stream, but pretty consistent dripping for a while.

Also, when set to dual blowing (so, upper vents for face and lower vents for feet), nothing comes out on driver's footwell side.

Imposter syndrome hitting me hard tonight. I know it is normal when you're trying something new, but definitely having a bit of that "you idiot, you thought you could do this and you clearly have no idea what you're doing" running through my brain. Persevering through it!

Completed the first oil change of my life last weekend. Went great aside from many, many paper towels giving their lives in service. Not having to jack up the truck was awesome and made everything so easy. I did have a lot of dripping onto the under engine cover when I removed the oil filter, not sure if I was supposed to remove it or not.

It legitimately took me 4 hours because I did a 5 tire rotation as well and was jacking up one wheel at a time, and I was triple checking everything with the oil change, but by golly I did it.

While under the vehicle for the oil change, discovered lots of clay in the bottom of the ... radiator. I think it was on the radiator. A thorough bath is due once I get the sunroof seal done. Seal came with the PartSouq order, but I read how using a 3M stripe off wheel would make like a lot easier, so I ordered one from Amazon and it comes on Monday.

I was going to do the bushings today, but discovered in setting my parking brake as a test, that it doesn't stop the vehicle. Considering I know there is an ABS code and I'll likely need to replace the ABS Actuator in the near future, this is now an even more pressing issue.

So I watched a couple of YT videos, read some threads, got the rear of the car on jack stands, got the wheels off.......... and then read the diagram wrong, thought the bellcrank stopper was the adjusting bolt, and snapped that sucker right in half. (I forgot to PB Blast it first.) So, add that to the parts needed.

I also, for the life of me, couldn't figure out how to use the star wheel. There was no adjusting plug in the rotor, but when I stuck my screwdriver in I didn't feel any wheel or movement. Does it have to be at a certain position (one of the videos had it at the 6 o'clock position) in order to work? Or is it more likely mine is crusty and hasn't been adjusted in a while due to the lack of plug?

And no, I didn't remove the bellcrank tension springs because I couldn't figure out how to do it without pushing on the spring so much I thought I'd break that, too. Would love any pointers... would like to figure it out before buying a stopper and then needing to go back to buy a tension spring or two!

I did try adjusting just from the lock nut and turn buckle to see if I could get any kind of engagement (Yes, yes, I know I'm supposed to work from the brakes to the turn buckle to the lever) and no dice. Got it to turn, also crusty, but unless it is supposed to go all the way to the engagement mechanism (to the left) then I feared going too far. The cable also made a popping, for lack of a better term, sound when I was turning the turn buckle from the clip mounted in the middle. Felt like it was relieving tension but not sure if that's accurate.

And lastly, I DID get the hood struts swapped out with the help of a neighbor. But I dropped one of the washers from the old struts (the classic thinking before it happened "hmmm, I should get my magnet to catch that" but not doing anything...), grabbed my magnet, stuck it down below the second battery, the plastic cover of the magnet came off and fell down as well and I didn't notice, the tool latched onto the right front quarter panel, and I dragged a nice 6" scratch into the paint. Idiot!

The truck's got dings and scratches so it shouldn't bother me, but because it was my own stupidity... I'm annoyed.

Oh, and with a battery tender from Harbor Freight discovered the 2nd battery is 9.2v and essentially not salvageable.

So yea. Imposter syndrome is real. I'm still a rookie. Bu hey, the hood won't come down on my head now, I changed the oil and rotated the tires, and did the same on my wife's car to save some money. So we've got some wins to bolster morale for the time being.
Last edited: Jun 6, 2020

Good brake bleeder for 100? Going to do my rear brakes
2