Yesterday As I was letting my dog take a crap, I opened FB Marketplace and saw an ad for a 97 FZJ needing a Transmission.(title shows its a 96) Just a couple pics of the truck, no interior, but it was clean enough and no visible rusted panels.The seller was only two towns away so I messaged him. I couldn't tell how old the post was and assumed at the price of $1,500 it was long gone. He answered and I told him I'd be there within the hour. Before my boy was done dumping, my mind was made and I'm pulling my cash out to go get this thing.
I arrived and sure enough, the truck is up on a lift way in the back of the shop. These guys spoke the worst English ever. We were in the heart of the Asian district of, Lowell, Ma.
The interior was clean(NO LOCKERS), it started and ran, but sure enough the tranny is pretty much non functioning. Looks like it recently took a little front end damage which is a good excuse to get an aftermarket bumper. Has brand new brakes and tires. A nearly full stainless exhuast and the engine looks clean with a new battery and unmolested. I didn't poke around a whole lot. I just needed to make the deal and peel back to work. I paid the man, collected the title and sent the tow truck to bring it to my friend's shop in that same town. I'll shake it down later this week and see whats going on. The reason they sold it is because the shop it was at told the PO they couldn't find a transmission for it! But he seemed very satisfied with his $1,500 and I didn't even try to negotiate. The guy's phone was ringing the whole time I was there. He kjept on answering and telling the callers it was "just sold"... It felt so good!
I thought I took more pictures, but in my excitement, think I looked with my phone flashlight more than i should have and forgot to take many pics. Here's what I got.
I'll be documenting it's condition, issues, maintenance, upgrades, repairs.

First things first, assess the Transmission. Does it need to be replaced, or is a flush and maintenance in order? I'm hoping to find out soon, but since a shop already had it, I'm thinking a replacement may be in order.
Anyone have a replacement in the New England area? I'll have to call cruiserparts.net as I know they part out but do not show what I need on their site. 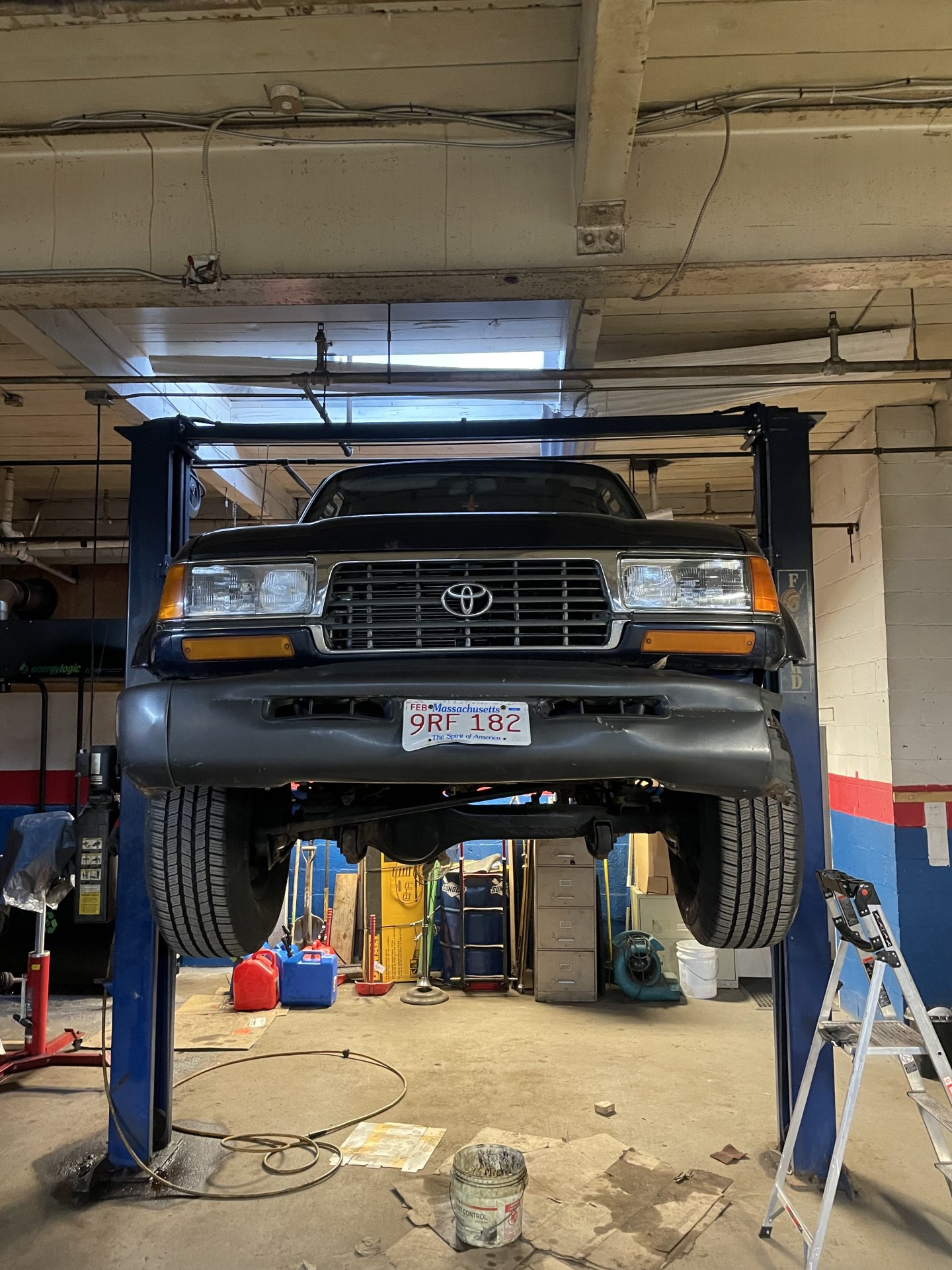 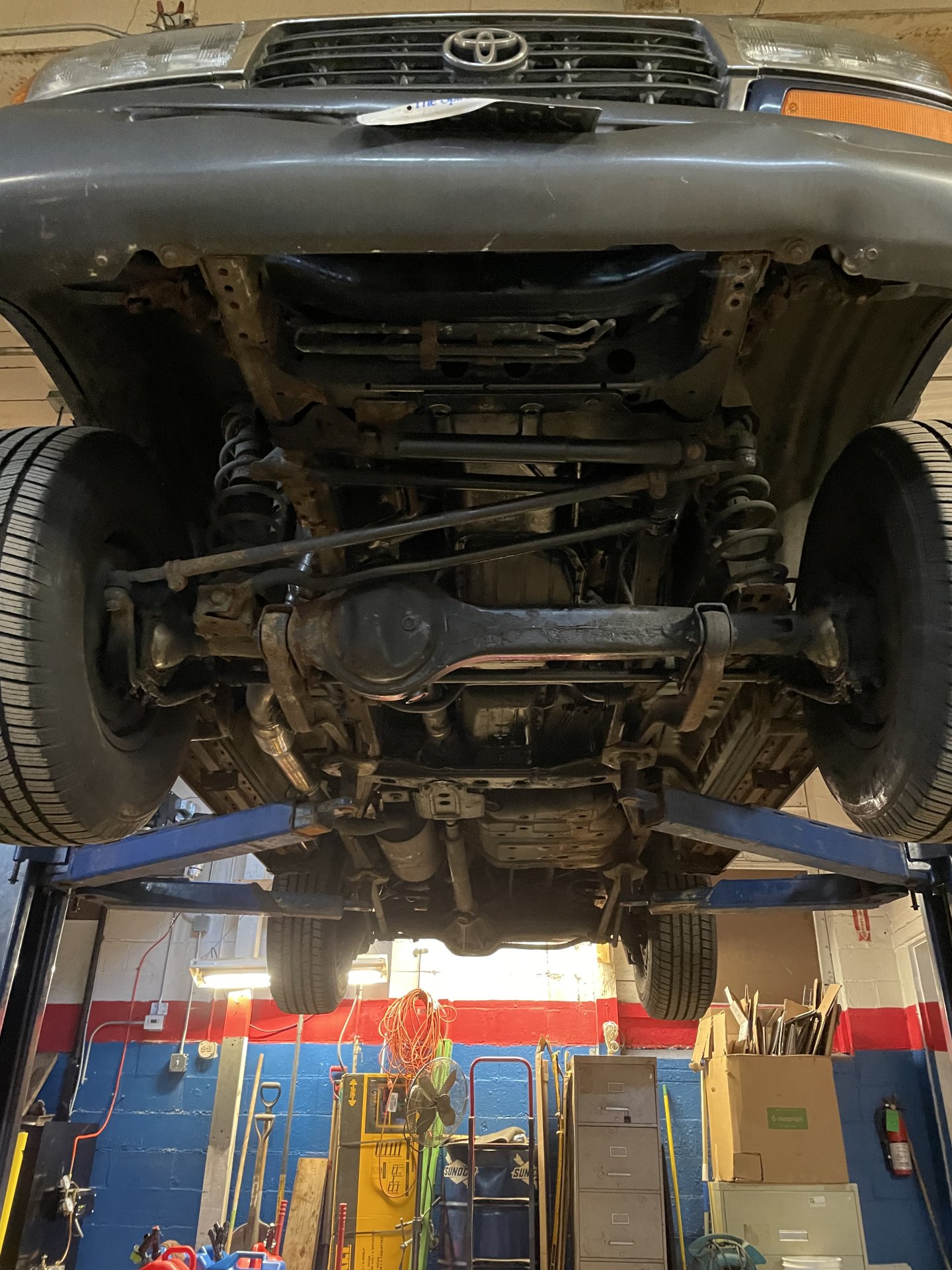 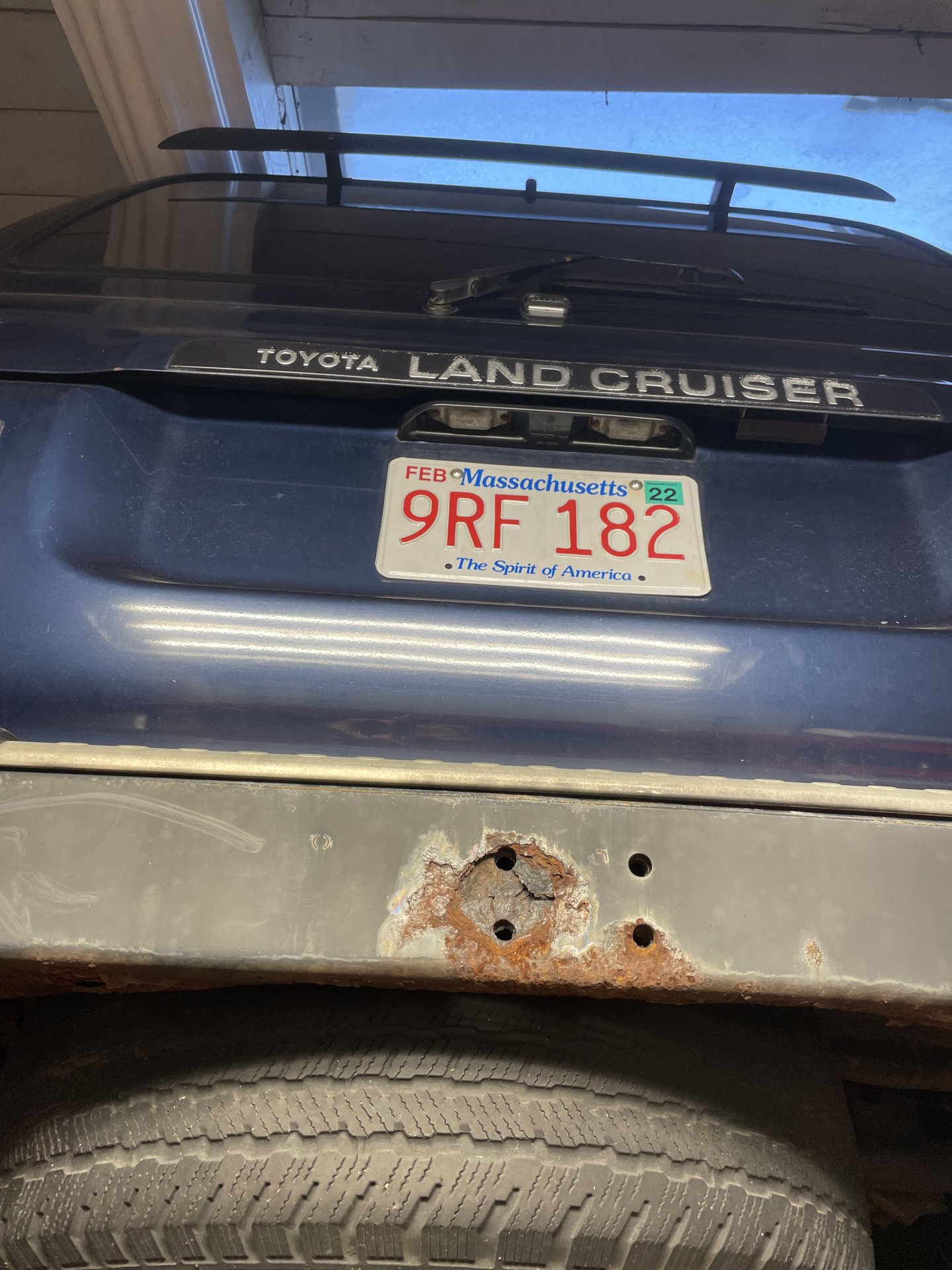 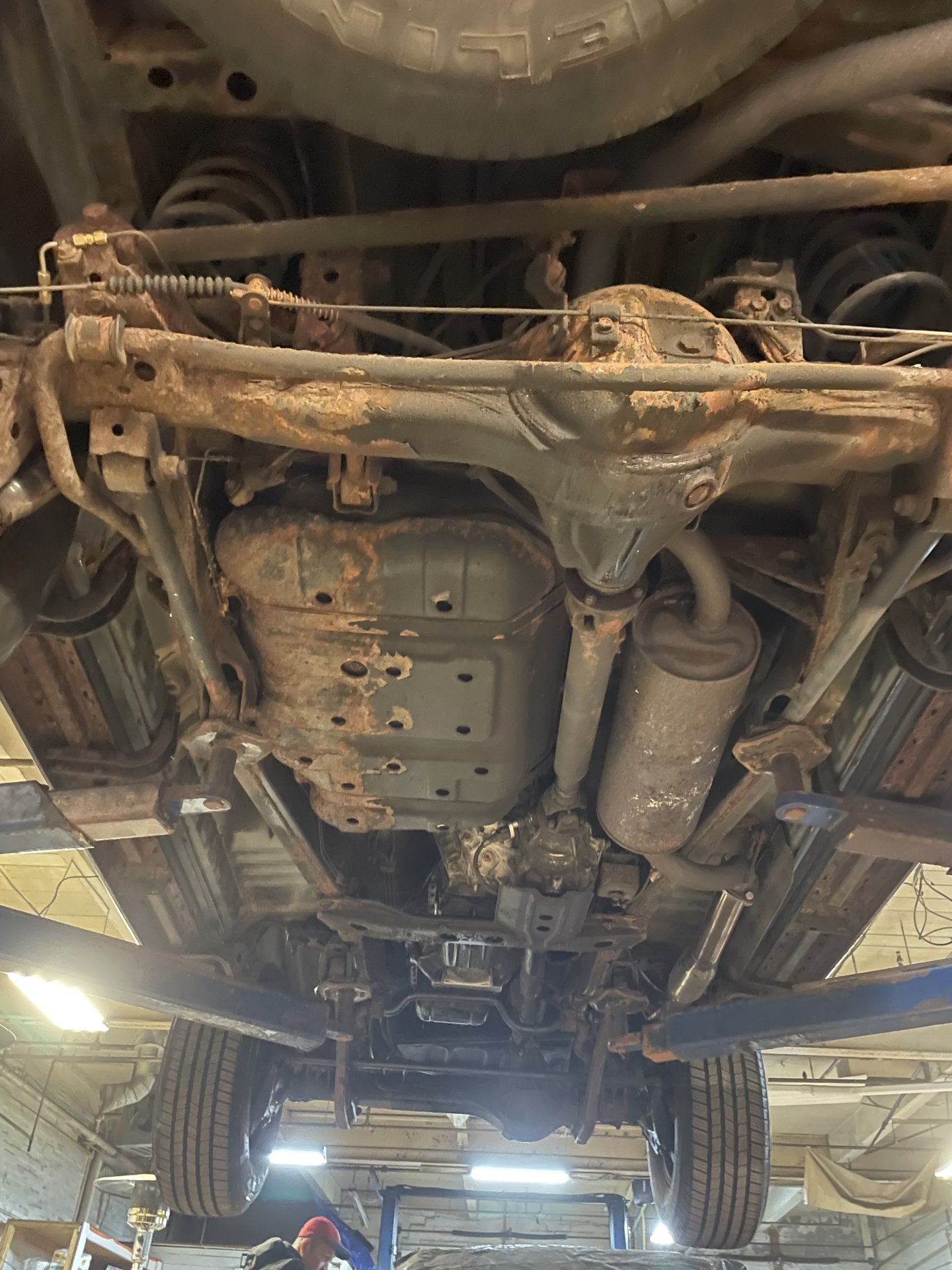 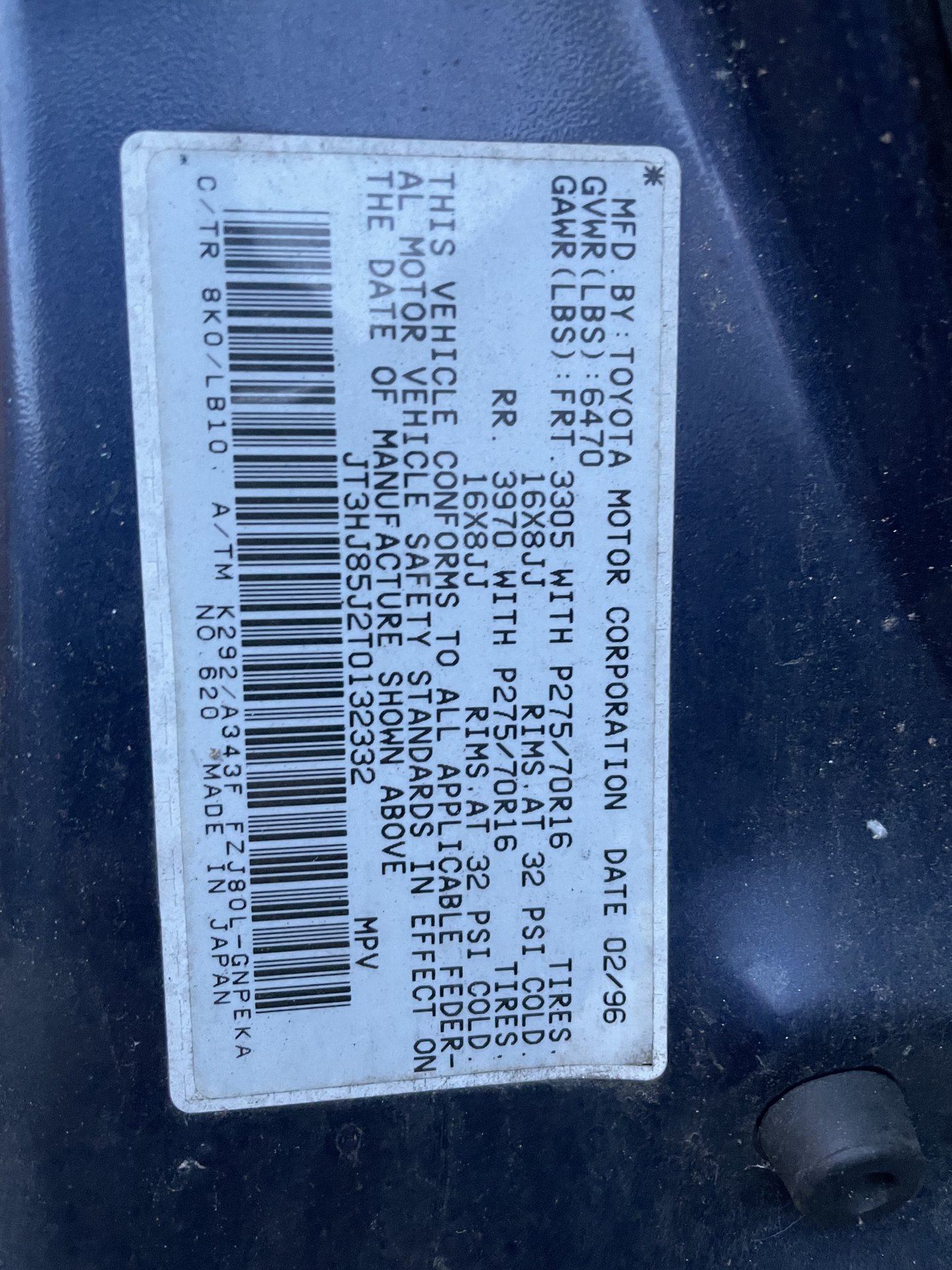 It's not unheard of for a transmission to die, it's just uncommon. One guy even had his transmission completely rebuilt, only to find out it was the inexpensive drive flanges all along.

If the CDL (center diff lock) still engages you can try to shift it into low range then test the trans. If the trans works in low after the CDL locks but doesn't in high when the CDL is open then that points towards the trans being ok and something like stripped drive flanges or similar in the drive train.

Nice score! I think it's clear your dog is the real MVP here. Had he not needed to go out at that exact moment in time, you may not have been bored looking at your phone.

That dog is the goose that lays brown eggs.

You guys are right. he's a heck of a good boi! Always patient and gentle. He rides in a lot of different cars and gets lots of treats 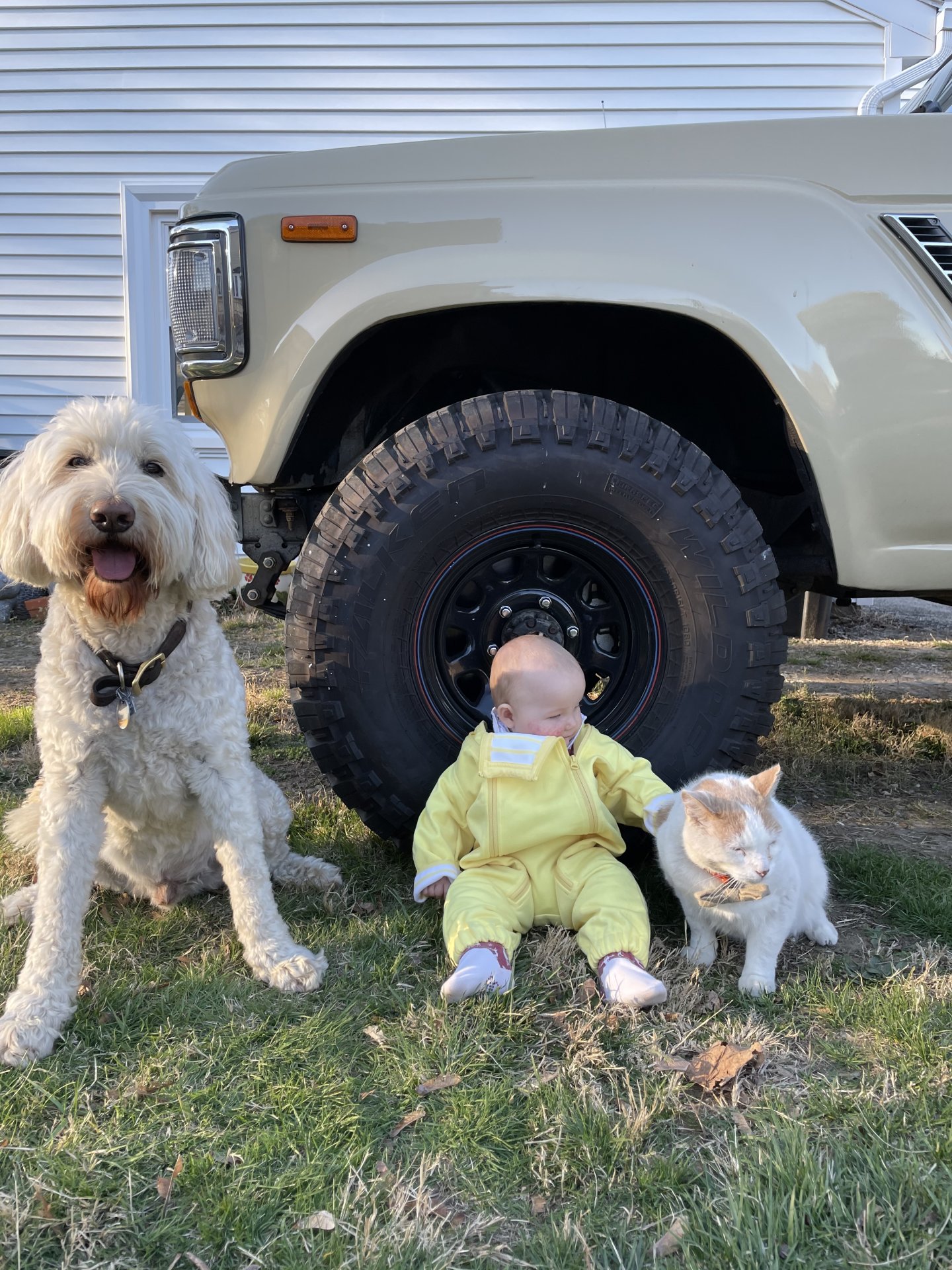 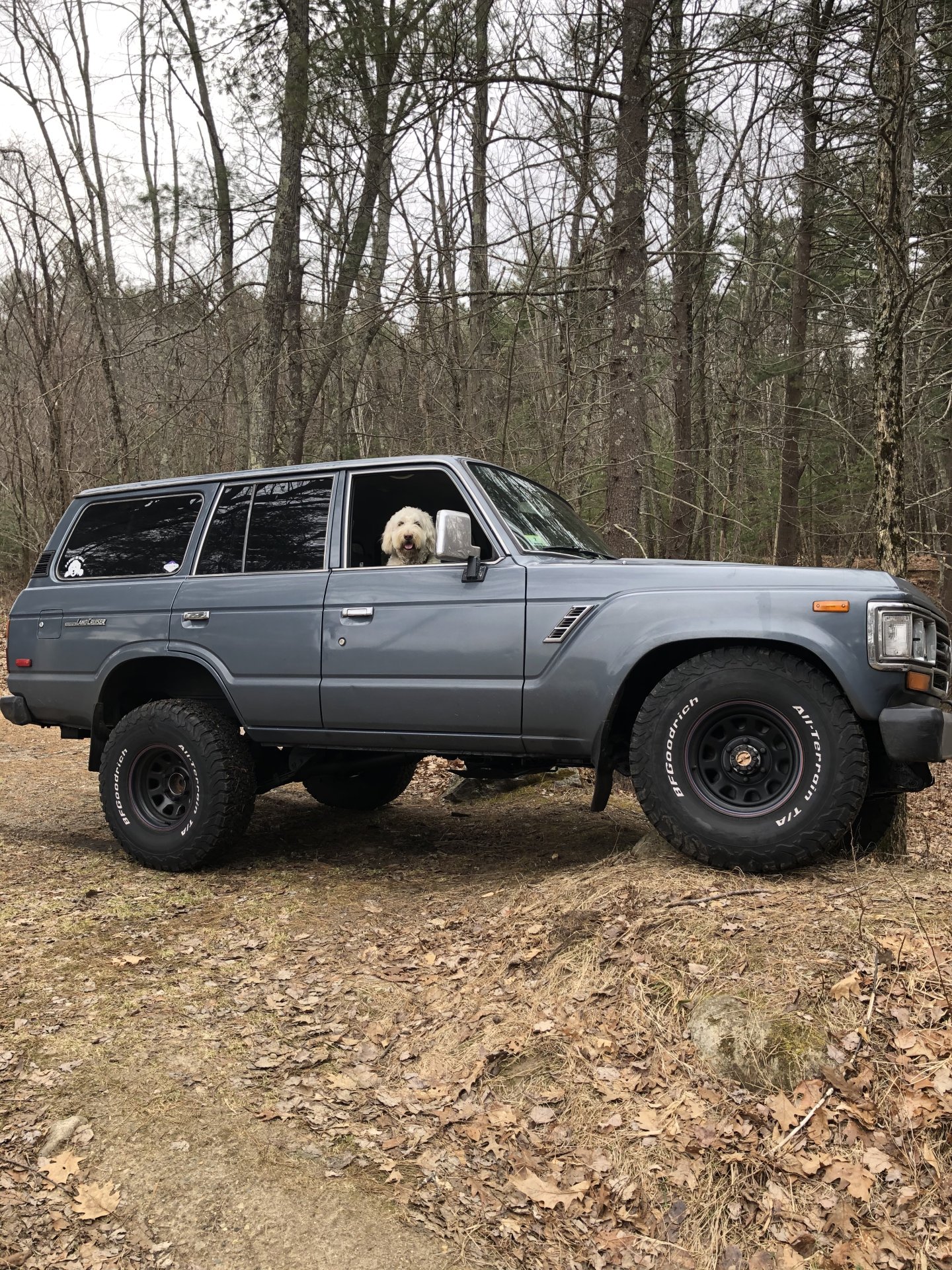 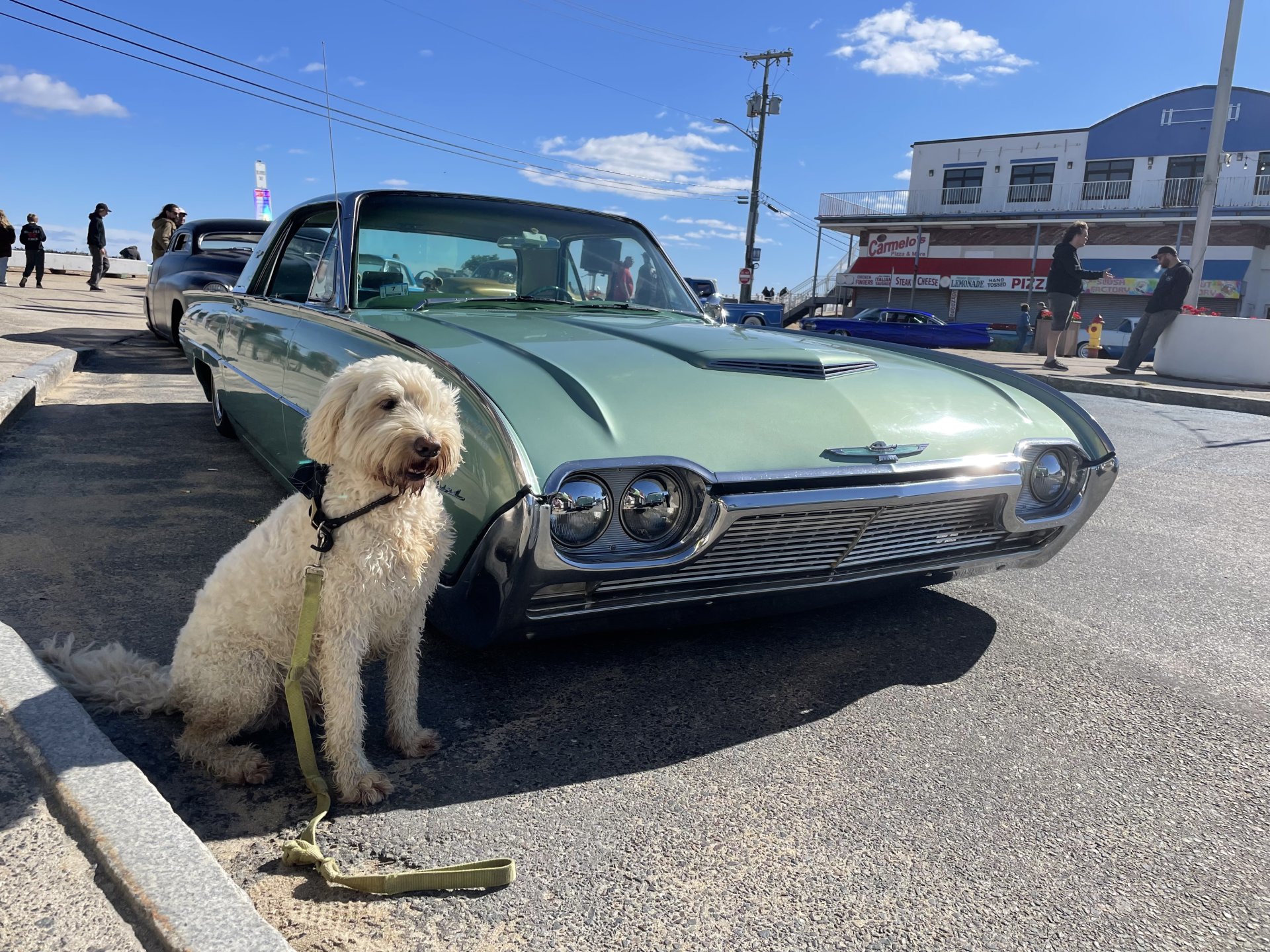 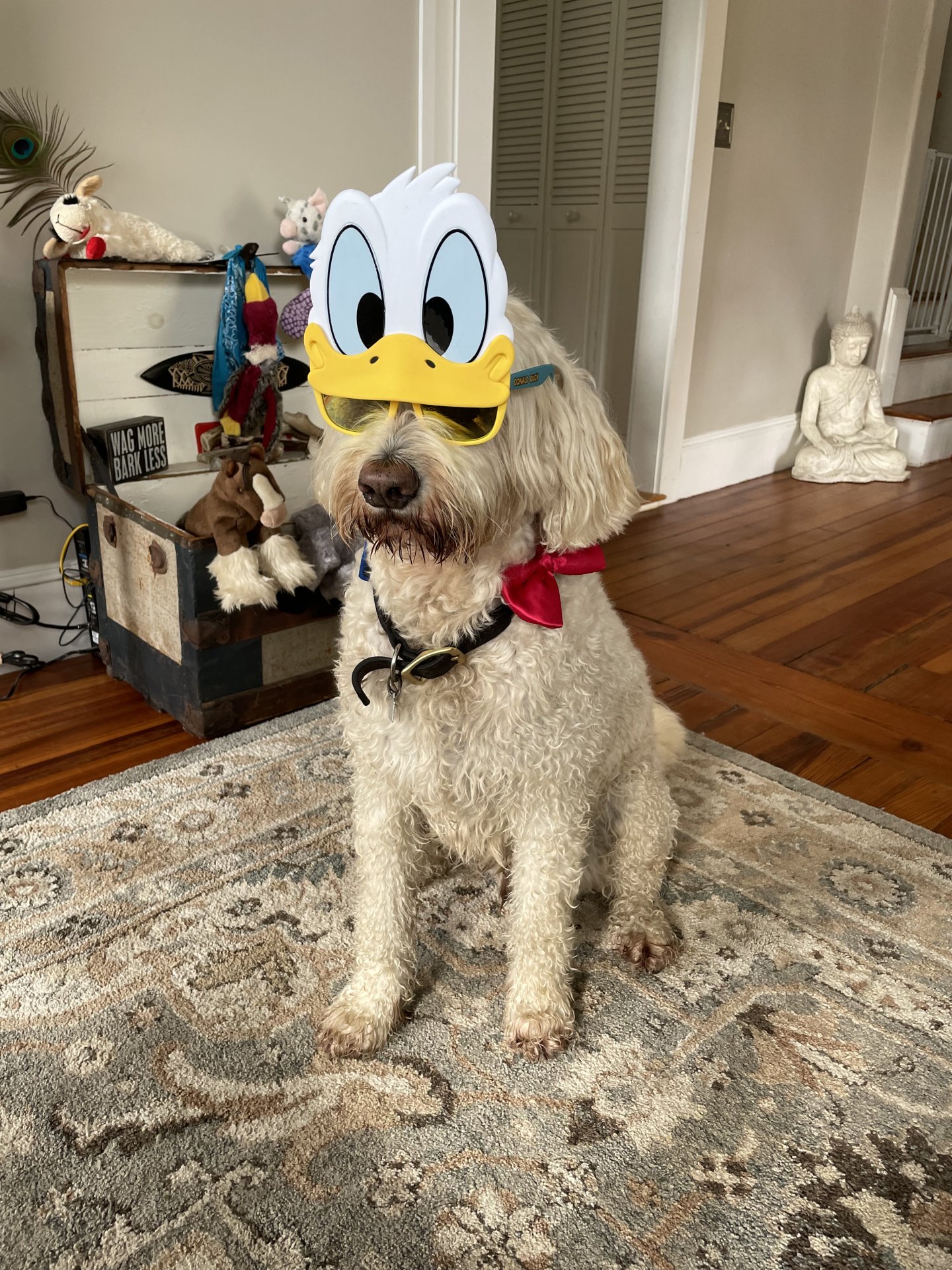 Sweet! Excited to see what unfolds! You going to flip it or keep it?

Get rid of that rust on the rear axle and gas tank skid and you got a winner!
K

Picked up a Sage 40th with a “bad transmission” this passed summer for $1,200. Seller said he stopped at a light and it just wouldn’t go after it turned green.

Got it to the house and found the undercarriage covered in oil. The metal tubes that pass though the core support to the cooler had a pinhole in it. Sprayed all the trans fluid out. Bypassed with hose and topped off and all is good. 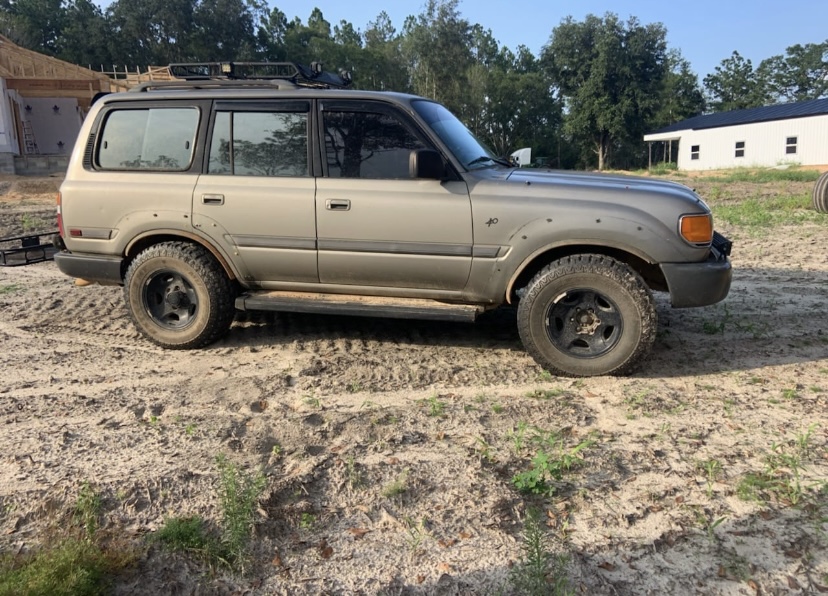 The idea that the transmission might be just fine and that the Birfs/cv's could just be broken or no fluid in trans gives me hope. I really had zero invested into diagnosing it at the time of purchase. So as soon as I get to check it out, I'm looking at this stuff. The knuckles are both leaking and neglected, so its not out of the question. I'll bet the axle has never been serviced, or maybe once. since it has 250K roughly.

Probably just throw a dealer plate on it and drive it(I sell limousines, strange, I know) but now I have a LX450, FZJ80, a 95 4 runner(broken) and my 07 Sequoia. The wife is getting a little fed up with vehicle purchases, but I couldnt pass this one up. The key is never ask if you can buy it. You can always ask for forgiveness.
Last edited: Dec 2, 2021

Wow this makes me so happy that the deals are still out there! That's my favorite color on an 80 also!

Even if the transmission really is dead, it shouldn't be too hard to find a used A343f. I think scrapyards usually can't give them away since they almost never break!

Ozark80 said:
Wow this makes me so happy that the deals are still out there! That's my favorite color on an 80 also!

Even if the transmission really is dead, it shouldn't be too hard to find a used A343f. I think scrapyards usually can't give them away since they almost never break!
Click to expand...

Yeah, someone on here that scraps 80’s says he doesn’t even keep the A442’s, just pulls the solenoids, I think that was it, and tosses the rest. I need to get one of those!

Ozark80 said:
Wow this makes me so happy that the deals are still out there! That's my favorite color on an 80 also!

Even if the transmission really is dead, it shouldn't be too hard to find a used A343f. I think scrapyards usually can't give them away since they almost never break!
Click to expand...

Same. We always read stories about other people getting awesome deals. I really thought it was too good to be true or that I would have been too late to the party. But there it was, $1,500
I was literally expecting him to change the price on me any second based on the way his phone was ringing.

My wife is still annoyed I snatched up a couple extra dollars out of the house account to make it to the asking price. She told me to "piss off" over text earlier! LOL
K

Take the wife out for a steak dinner ASAP to a fancy restaurant and buy her a small gift, flowers, jewelry, etc, value doesn't matter. She'll forget about the money spent on the 80 (because you just spent some money on her).
Last edited: Dec 3, 2021

Awesome deal. I saw that listed and figured it was too good to be true. Glad you scooped it up and hope it is a great truck for you.

I have been dreaming about getting one that color
John

B
Considering selling my'96 FZJ 80