The Pirates of NYC

Read their tale of woe: 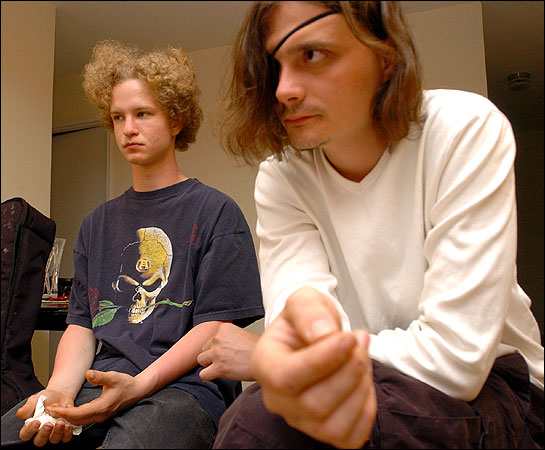 I've been trying to think of something to do to liven up things around here...and now I have the inspiration needed! (always wanted to ride in a helicopter!)

Jman, can you copy/paste the story, I don't want to register.

firetruck41 said:
Jman, can you copy/paste the story, I don't want to register.
Click to expand...

Afraid of the big, bad, NYT?

firetruck41 said:
Jman, can you copy/paste the story, I don't want to register.
Click to expand...


Ben---you can use this login:

Anyone on MUD is free to use this to login to that liberal rag from NYC!!

no, i'm on the waterjet 'puter.

The final voyage of the boat with no name, formerly docked at Kings Plaza Marina in Jamaica Bay, Brooklyn, began innocently enough on Monday night, with three friends, an assortment of guitars, a full bottle of Myers's Rum, a hookah and a dream of the open water. It ended yesterday afternoon in a stalemate over a $3,000 towing fee.

The ill-fated 24-foot sailboat bobbed in Jamaica Bay Wednesday, a day after it became the centerpiece of a comedy of errors by three friends.
What happened along the way, a comedy of errors involving an ill-fated attempt to swim to safety, signal flares wasted as fireworks and an empty bottle of Myers's Rum, drew in the police, worried families, a helicopter rescue unit and a singularly displeased marina owner.

For Alexey Zharov, the 16-year-old at the center of it all, the voyage draws to a close with a mixed legacy. The boat is shipwrecked and he has a nasty cut on his finger, but at least Alex is not grounded.

It should be explained that Alex, as he calls himself, runs with an older crowd. He speaks with an East European accent, has an unruly blond Afro and plays in a band with several fellow Ukrainian immigrants, most of whom have at least a decade on him.

"It was very cool to have older friends," Alex said.

It is also useful to know that Alex's bookshelves contain, among very few titles in English, the complete works of J. R. R. Tolkien and an illustrated hardcover edition of "Treasure Island."

"He is very adventurous," said his father, Viktor Zharov.

One of Alex's band mates is Roman Gadzhilov, 26, owner of a 24-foot white sailboat, which he keeps on a dock behind Macy's at the Kings Plaza shopping mall. Mr. Gadzhilov said he had planned to name the boat after his daughter but never got around to printing the name on the side.

Christened or no, a boat is a boat, and Monday was a warm spring night. Around 7 p.m., Mr. Gadzhilov and Alex shoved off from the marina, accompanied by Alex Glubochansky, 31.

"Our goal was the open ocean," Alex Zharov said.

From the start, the voyage was troubled. Mr. Gadzhilov fell into the water and lost his cellphone, Alex said. But they forged on, with Alex at the controls and Mr. Gadzhilov on the deck, naked as the day he was born. They took lots of photographs, which bear this out in excruciating detail.

The ride out from the marina runs through Mill Basin into water that has been ranging from about five feet at high tide to less than one foot at low. Getting stuck is not uncommon, said Lewis Martin, 51, owner of the marina.

"I had a customer the other night who got stuck out there and called me and said: 'What do I do?' " Mr. Martin said. "I said: 'Are you out there with your girlfriend?' "

The boat with no name sailed into Jamaica Bay, where the shore is lined with houses and the Empire State Building is visible in the distance. Their ride was a party, for a while.

Around 11 p.m. Monday, as the men tried to make a turn, the boat's outboard motor ran out of gas, Mr. Gadzhilov said. A gust of wind pushed the boat into the clay, and the party was over. The onboard radio was nonfunctional, the cellphone was in the water and the boat's flares had been fired off earlier in the night in a celebration (photographically documented, of course).

They slept the night and awoke feeling not so well, and here their paths diverged. While Mr. Gadzhilov and Mr. Glubochansky rested, Alex took his fate into his own hands.

"It's noon already and I got bored," Alex said.

He waded out to explore Stony Creek Marsh, then thought he saw the mainland, though he was really looking at Ruffle Bar Island. He stripped to his underwear, put his clothes in a waterproof box with his keys, MetroCard and Buddha medallion, then swam.

On the island, he built a raft of plastic sheets and wood, which fell apart. He found baby ducks and came to terms with the notion of eating them, if necessary. He tried signaling a helicopter. He dug huge letters in the dirt, spelling out "Help."

Back on the boat, Mr. Gadzhilov and Mr. Glubochansky were spotted at 5:55 p.m. Tuesday by a helicopter crew, according to Lt. Kenneth Solosky of the New York Police Department Aviation Unit. The men made no mention of Alex during their helicopter ride, but back at the hangar:

"I hear him say: 'I'm worried about my third friend; my heart's in my throat,' " Lieutenant Solosky said. "I'm thinking, the third friend?"

Others were worried. Alex's parents called police precincts and private water rescue companies, but there were no reports of Ukrainian guys with guitars.

"I was desperate," said Alex's father.

Back on Ruffle Bar Island, Alex was trying to dig a scooter out of the mud, intending to ride it to safety through the water somehow. This effort produced a gash on his middle finger and convinced him that additional swimming would subject him to shark attacks. Finally, after seven hours alone and wet in his underwear, Alex was spotted by a fishing boat.

"I felt like Robinson Crusoe, you know, in New York," Alex said.

As he summoned the courage to swim to the boat, mindful of his shark-attracting wound, Alex heard a great whooshing sound. He was lifted from the water into the same helicopter that had rescued his friends. He left his Buddha medallion behind.

By yesterday afternoon, the crewmen of the boat with no name were safe and dry. Mr. Gadzhilov, who was wearing a pirate-style black eye patch, said he had been hit by the metal pole at the foot of the sail. His boat was still stuck in the mud.


LOL, Swank, I added "ARRGGH" and "AVAST" to my earlier post at the same time you did.

The picture is indeed priceless, this is continuing to crack me up.

You obviously haven't read this:


Someone once lectured me at length about this making the term "Butt Pirate" so much more offensive. I then asked her about the history of smugglers.