MUDZLLA said:
Would maybe have it shipped to Halifax and drive home from there (I live in Canada).
Click to expand...

Funny you should mention that--a Canadian who assisted me in this process is doing exactly that with the HZJ105 he just bought. He had planned to have it shipped to Nanaimo (like I did) since the port is close to his house, but for some reason (not really sure) no RoRo ships are coming to Nanaimo now. Maybe they'll come back later? Who knows, but his car is on the way, and the only port he can use in Canada is Halifax. So...road trip, I guess.


kenavt said:
I’m really impressed you got these photos of the RORO process.
Click to expand...

The photos I posted of my car driving off the ship upon arrival are actually stills from a video, I was just too lazy the other night when I posted to bother uploading the video to YouTube so I could post it here. But here it is:

Glad to see you made it home Steve, this 80 is definitely the nicest cruiser I have seen in person. Excited to see what you do with it!
B

Congratulations with getting it home. You left out the bit where you bought some projects before hand, that's my favorite part cause it gave me a LHD Donor for my conversion . 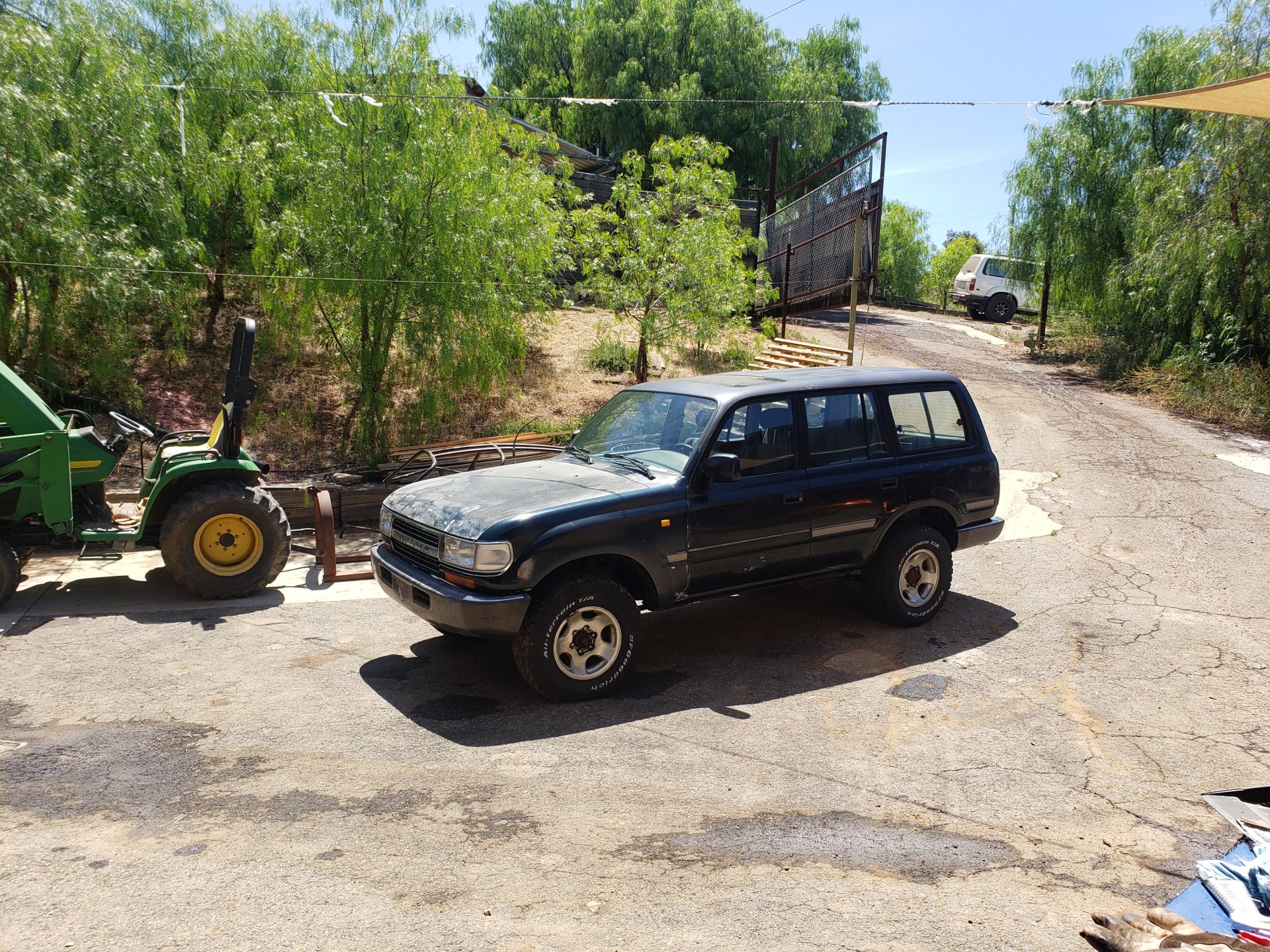 Finally had some time to get outside and do some cleanup and assessment today. First project was to remove the miserable cluster of a trailer coupling off the back. Besides it being ugly, I was concerned I'd whack my shins on it. The majority of it came off with just four bolts, so not too bad. The remainder is welded on, and will probably require the replacement of the rear frame member to put it right. That's for another day.

Here's how the tail end of the car looked when I got it: 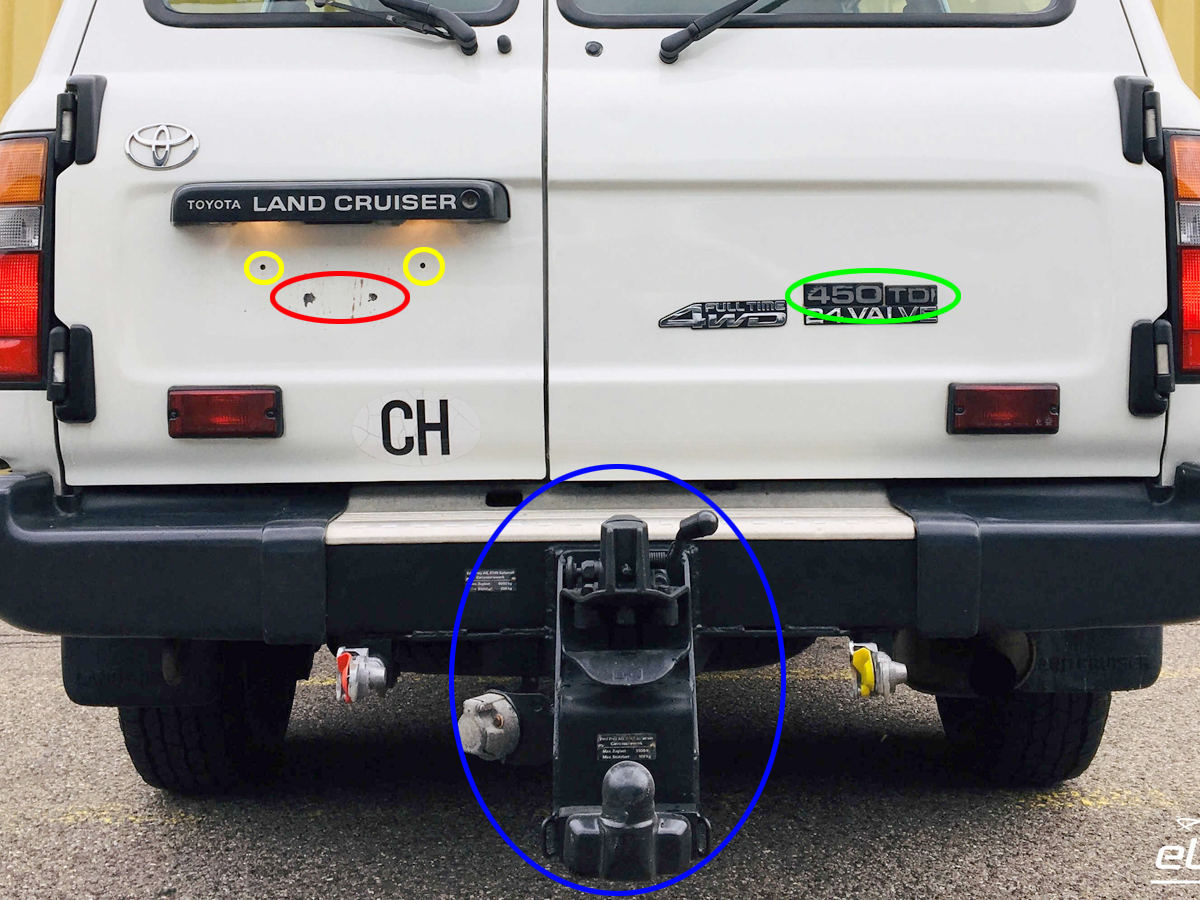 Circled in blue is the hitch that's now gone.

Circled in green are the "450 tdi" badges that were apparently added by the Swiss distributor--I've never seen an 80-series marketed as a "450" anywhere else. It doesn't even make any sense. There's nothing 450 about the car. lol So I took them off.

Circled in red are some random-ass holes that a PO put in, probably to help hold the license plate on securely or something. Surprisingly bad engineering for a Swiss guy. I cleaned them up and put a small (M4) button head machine screw in each, sealed with silicon and backed with a nylock nut. Should be fine and it'll be behind the license plate anyway.

Circled in yellow are the license plate mounting holes that came from the factory. There are captured nuts behind, which is a nice touch, but a PO (probably the same guy that randomly drilled the other holes) used big sheet metal screws in them, rather than machine screws, and messed up the threads. They cleaned up OK with a tap.

Here's how it looks now: 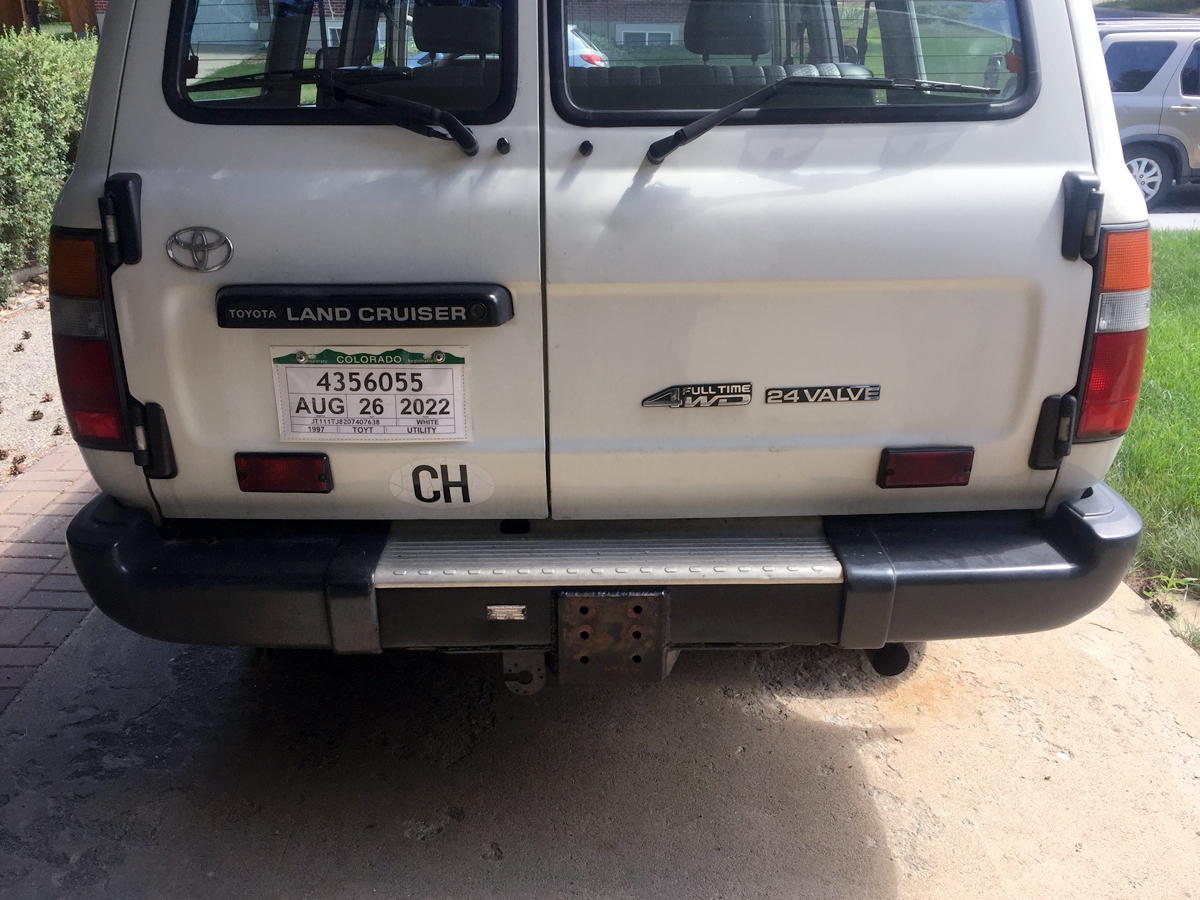 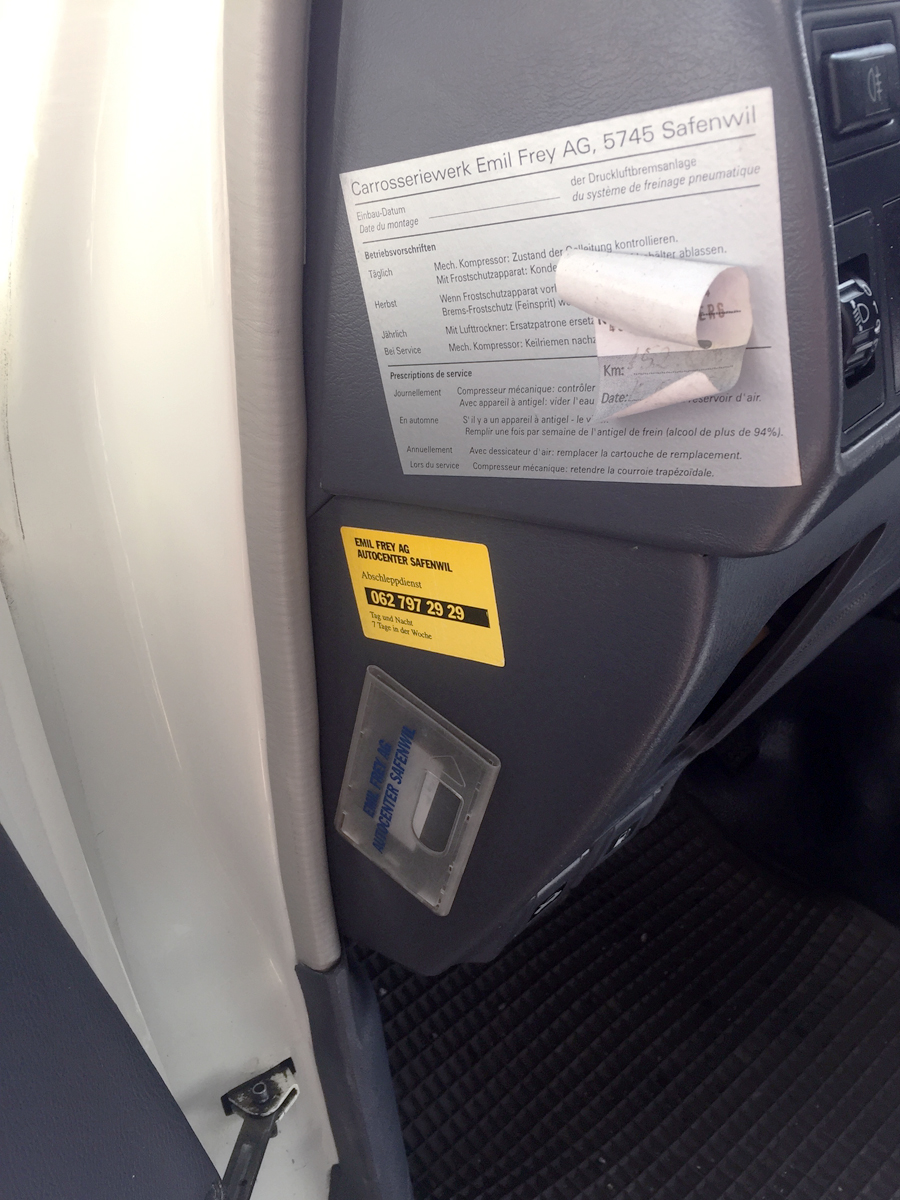 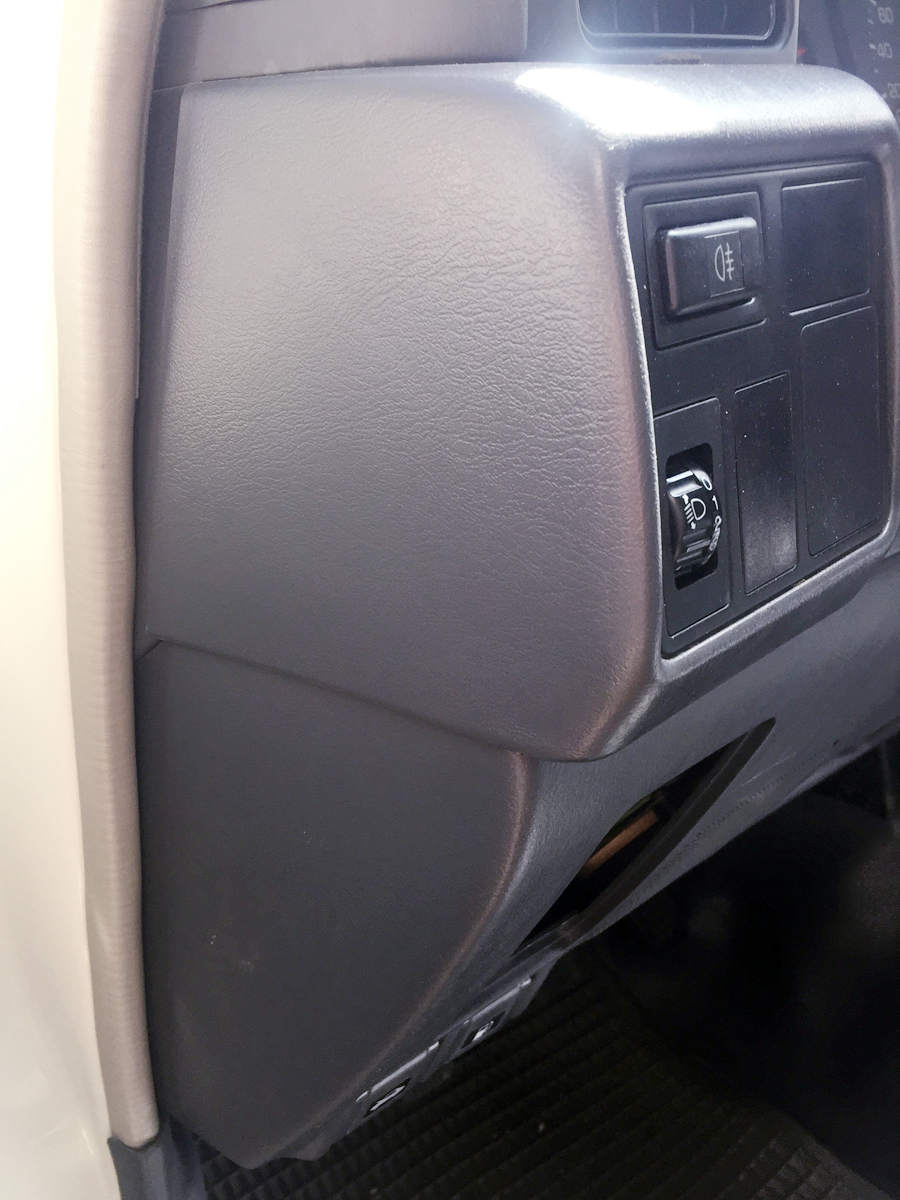 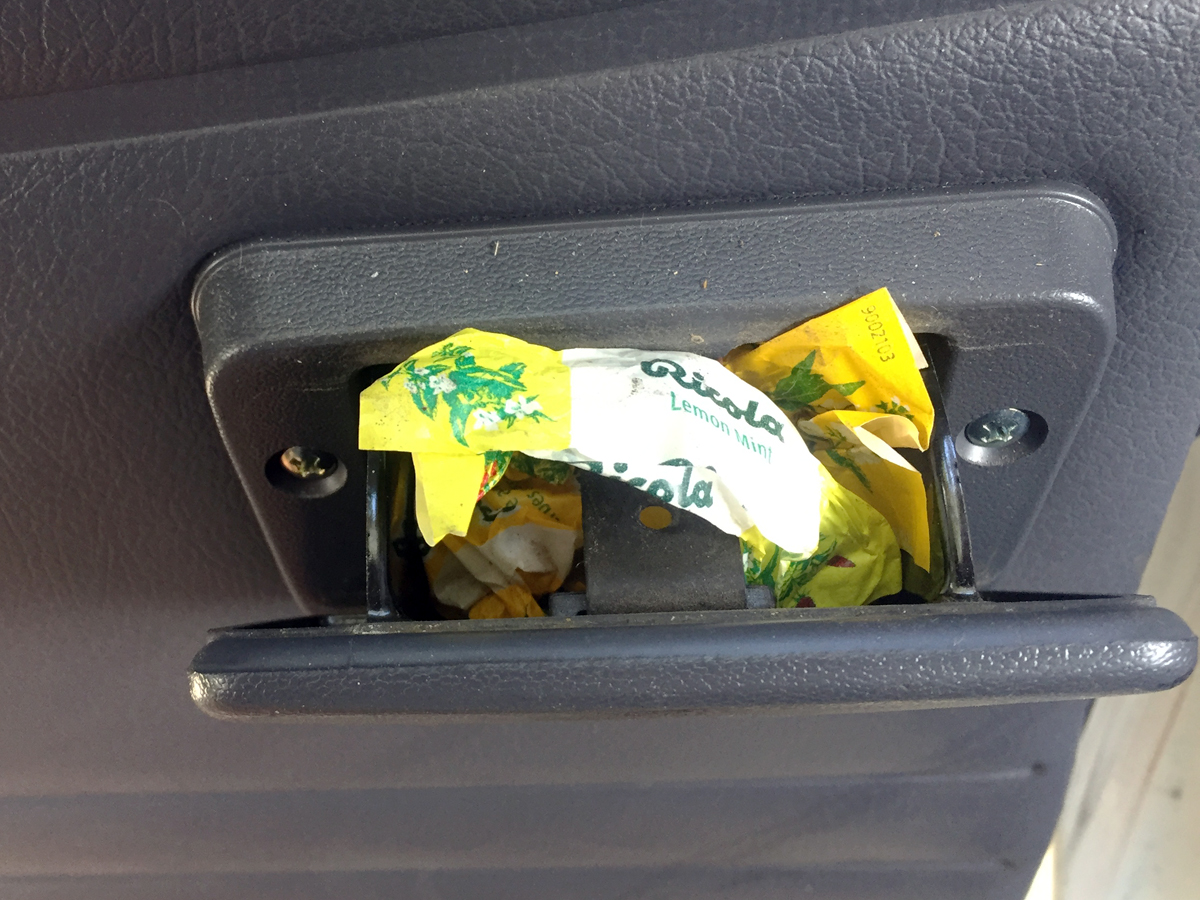 gilmorneau said:
I also went around the car removing stickers. Europeans seem to love them. There were insurance stickers, shipping stickers, service stickers. They're all gone now. Here's a sample of Swiss handiwork:


I would have left or relocated the clear little pouch, great place to store stuff especially if you get held up. They will get away with a few items but you'll still have a few other cards/ID.
1994 Land Cruiser, Yokohama Geolandar MT G003 315/75-16, CSC #572

gilmorneau said:
...and this was too funny to not post.

While in preschool I shoved tons of candy and wrappers in these cubbies while in the third row of my mother's 80. Upon discovery she was not impressed.
TLCA #28126

I’m from Switzerland. Emil Frey AG is the sole importer of Toyotas into Switzerland and hence all the stickers with that name on them. I have the CH sticker on both by land cruisers. You going to keep it on the back? Gives the truck some provenance.
1993 FZJ80 all stock
2021 Magnetic Grey

The CH sticker on the back is probably as old as the truck, so it would probably be difficult to remove anyway. I was planning on leaving it on there partly for that reason and partly for provenance, as you suggest.

gilmorneau said:
I also went around the car removing stickers. Europeans seem to love them. There were insurance stickers, shipping stickers, service stickers. They're all gone now. Here's a sample of Swiss handiwork:

Yep, that was an option in Europe (and Japan?)

gilmorneau said:
The CH sticker on the back is probably as old as the truck, so it would probably be difficult to remove anyway. I was planning on leaving it on there partly for that reason and partly for provenance, as you suggest.

@ToothDr PM me if you want to come have a look at it.
Click to expand...

Nice. The first Toyotas were imported into Switzerland in 1967 via Emil Frey AG
I believe they still hold sole rights to the Toyota franchise in that country.

I’d love the see the truck. Will shoot you a PM