Suspension Conversion on a 73 (1 Viewer)

A brand new member. Just finished the engine swap on my FJ73 to make
it an HDJ73 with a 1HD-T and is definitely the most powerful rig I
ever owned. I put in Old Man Emu leafs with LTR
shocks which are good enough in general conditions. However, the suspension does not respond fast enough. I am actually looking right now to convert
it from leaf to coil or coil over. I was looking for
anybody who ventured on such a project before or can
at least point me in the right direction as far as parts and
suppliers. Mine is a 73 but I think the process would be very similar to a 40 or a 60 if anybody has more experience with them.
My biggest concern is length and location of control arms. Choice of suspension make is an issue as well but probably a later decision. Any Advice? 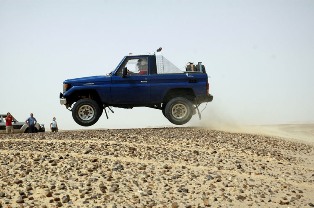 if you are going to go to coil pick up an old LJ71 and you will have everything you need to do it right. order a front set of springs for a 2001 79 series and if youneed a lift or custom springs made up then there is a company in NZ that is making "one off".
cheers
A

Thanks Wayne. A couple of questions: Isn't the LJ71 wheelbase 90 in? The 73 is 102 in. Wouldn't that differ in control arms lengths? Also can you send me the contact of the NZ company?
thks

i will need to find the address, it might take a while.

yes the frame is shorter but the mounts will be the same for both. i would cut out the pieces you need and weld them into the 73 frame. i was going to do this with an old 74 series i had but i lost interest.

yah i was thinking the same thing leave the leafs and use the front end of a 79 series...
good call.
cheers
M

What I am going to do to mine fairly soon is swap the whole tub over on to a 80 series chassis. I know someone who did it with a 75 series (ute) Basicaly all he had to do is move cab mounts and shorten the steering rod.
On a midi you also need to cut a bit out of the back of the rear wheel arches as the wheel base is a little longer.
You must log in or register to reply here.