Long overdue pictures, been busy trying to get caught up after a delayed start. Project is to swap 2F, sm420, Toybox with a 4.3 Vortec and 700r4, into my Atlas 3.8. Also had to return my frame to UROC legality, removing the clearanced cutout in the frame sections. Choose to cut the entire front section off and replace, raising it at the same time.

Parts used for this round of upgrades include:
700r4 by Rusty Bray (fellow Uroc competitor)
2001 4.3 Vortec 3000 miles on it, dealer take out (thanks Jon!)
Art Carr shifter
Northwest-Aero pulley's and accessory package
Howell-Efi harness and ecm, and a wealth of advice!
Misc GM stuff from my local dealer (and wife's employer) and the uncounted $$$$ spent at Earls, Summit and Jegs on stuff I didn't need before.

Got some help from a few guys on here too, some bought parts from me, some sold/donated parts to me, Thanks to all of you! Followed Texican's thread on the 4.3 he is doing/did and got some ideas too, old fart has some' good ideas! But, night after night, AJ and Bob have been here getting dirty, and making this all happen! Thanks guys

No real order on the pics, and many more to follow, if you see something that interests you, I probably have a pic of it, just ask! 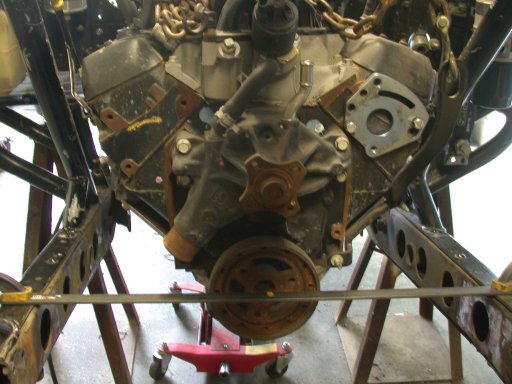 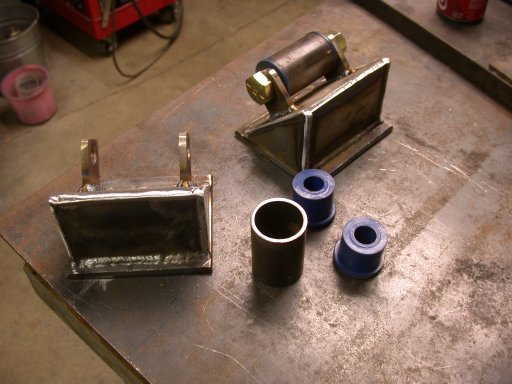 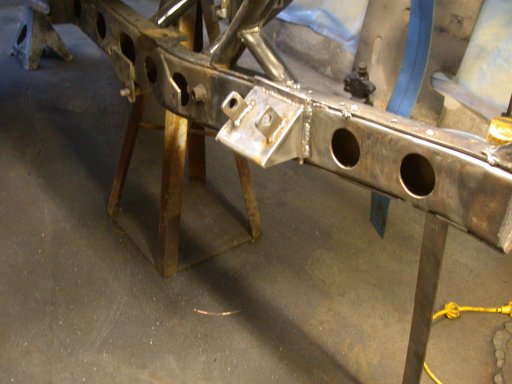 Rear mount Atlas hangs from this, second pic is front mount pass side. 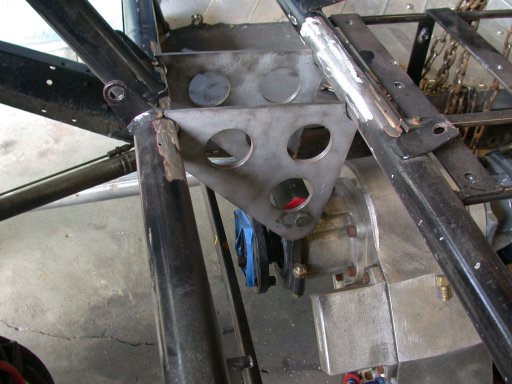 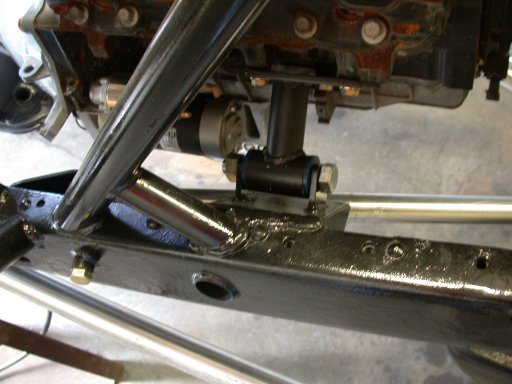 Steering box, stuck with the sagianw unit and a shot of the motor sitting in place 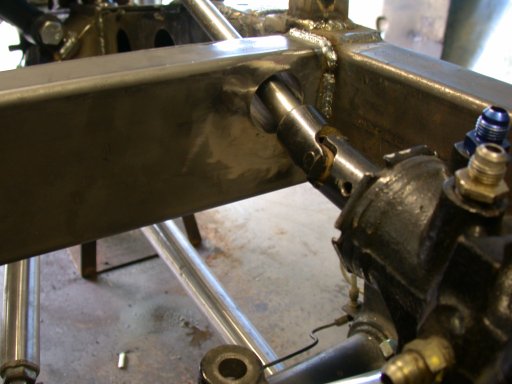 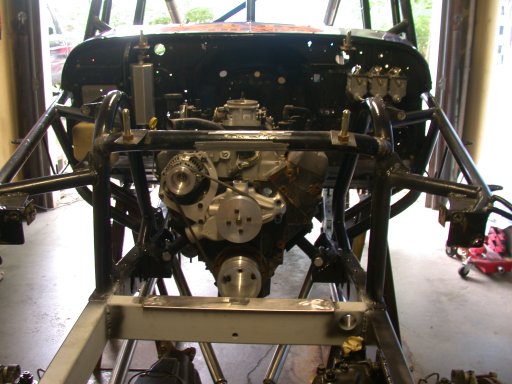 Rear mount with paint, and tranny cooler followed by power steering pump, and partial shot of the bling ass serpentine pulley set (more to come), then the hand fabbed exhaust, stock 01 blazer manifolds, routed up n over tranny and mated together. One piece into muffler, and wrapped to keep the heat down. Thats all for today......................... 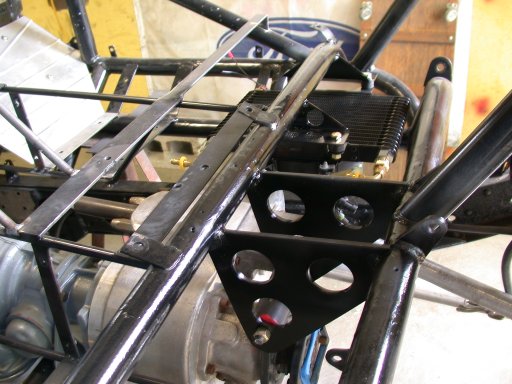 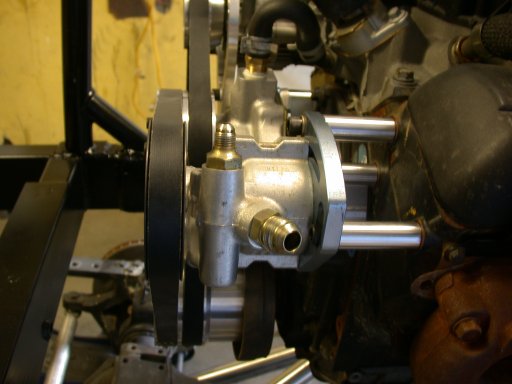 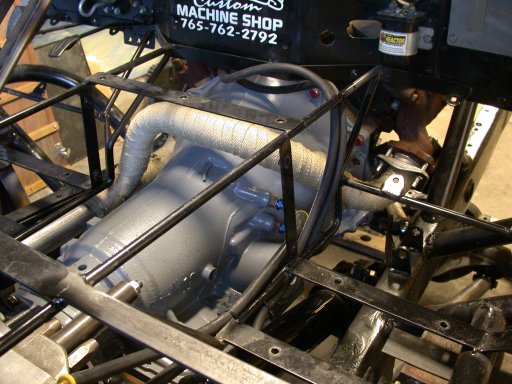 is the trans adapter going to be supported from the bottom as well?!

orangefj45 said:
is the trans adapter going to be supported from the bottom as well?!

Yes, we chose to put the mount under the tranny, not the adapter. Bushed on the ends, like the motor and rear mount, here's a partial pic. 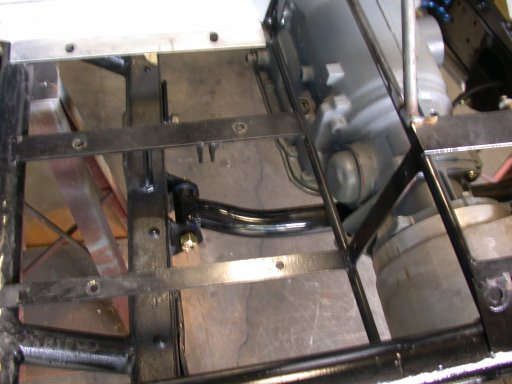 I may be interested in your toybox if you still got it.

Turd polishing going very well, that wrap on the exhaust really brings down the temps I have been told.

See you placed pretty good in the event this weekend Mike. How did you like the new setup>?

Multiple replies all together cause I'm a lazy and sore bastid today!


Toybox setup is sold, shoulda removed the post I guess. Hopefully megolfer is a happy buyer, I don't think he has had time to do anything with it yet.

Yes the wrap seems to cut the heat down some. No denying this thing makes some heat, thermostat is a 195 deg, and it runs just above that acording to guage. probably gonna swap in something lower and shoot for 195 overall. We finished the interior panels and sealed up all the holes in the firewall and that dropped the temp inside substantially. I think I will have to insulate the tranny cover area with some kinda thermal mat to reflect the heat off the panels, friggin burnt my thigh. Running the exhaust up and over the tranny eased the space cramping issues, and was actually easier than I thought it would be, and allowed the use of the stock 01 exhaust manifolds. But the heat is an issue here at mid 90's, use caution if you live in the heat belt!

Overall I am very pleased with the outcome. I feel quite stupid now for hanging on to the old drivetrain as long as I did. Reminds me of the cruiser axles I stuck with way too long as well. Maybe I'll learn, oh wait it was all about the $$$$.

Best I can tell I lost almost 275 lbs, I didn't use the same scales before and after so some error is considered based on others experiences with the different scales. We used a nice set of corner plates to get the current weight and balance ratios. Don't know where the actual notes are but total was 3400 ish, and frt/rear was 53/47. Power to weight is way up, getting the tires turning is effortless, and the full manual 700r4 makes choosing gears easy too.

Raising the front section of the frame was noticible as well. We lowered the front ride height and still had better approach than ever before. Getting the tcase clocked up level and the tranny pan above the frame rails means we can mod the skid plate to be totally flat between the link mounts. Nolan noted the same thing in another thread, this is a big improvement, you will see it right away.

Have a couple of issues to cover before the next event, first off the little alternator isn't spinning fast enough to keep the battery charged at idle. The custom pulley's and mount stuff is very trick, and great quality, but was designed for a plane where the motor turns 4k for extended periods. Not practical for a rock crawler. Local rebuild shop told me that unit wasn't big enough (physically) to crank up for more output. They have a small machine shop and do all types of one off setups for hi output stereo gear, and old restorations, I am gonna take the whole rig to them next week and see what they suggest.

Second issue, and I should have seen this coming is the huge amounts of oil that pours into the intake from the valve covers when UPSIDE down! Hydro locks the motor in a matter of minutes, so several things will be done to eliminate this. I will add a holding tank for the oil to enter when upside down, and vent it with some creative routing and maybe check valves so when righted it doesn't just suck it all into the intake anyway. I did this on the 2F and stopped the huge clouds of smoke after I laid it on it's side (passenger is worse, pcv is so low in block) and eliminated fluid leaks from rolling.

I don't think I need anymore power to do what I am doing with this. Actullay I know there is such a thing as "too much" , parts break, and it becomes harder to drive. Now if I can just keep my left foot still!

Our finish this weekend was dissapointing for us. It was muddy and some stuff was nasty for everyone. We made a couple of costly mistakes that turned into 40's. 2 rolls, one definetly driver error, and the other just a bit off line and could have been prevented, and likely scored very well. For what it's worth, we had tempered our expectations (seeking a top 5) for the first run on the combo. We had no mechanical failures, or broken parts, and besides some fresh dents on the purty ass hood, nothing needs repaired.

Good read, each time I read a post like yours I learn a dozen new things, take care of those old bones.....
M

Thanks Mike for the toybox. I got it all un-packaged and everything looks like it is brand new. Now I just need to get time to get it in. Still gathering all the parts like drivelines and metal to makes the skids.