Something's cookin under the hood.. and it sure smells good!

While in Moab I developed an affinity for engine-baked burritos. Wes & Perry showed me the ways with the foil, and the technique made for some very tasty trailside treats. The downside was I was always a little preoccupied about the burritos falling out (I think Wes' BJ had one burrito casualty that week..), plus I kept worrying about cheese or something dripping into the distributor or something. You can cook 1 burrito very well wedged between the valve cover and that hook thing used to yank your engine up, but any more than that become incrementally sketchier, as they must be wedged between other wires & hoses.

Then while discovering a new leak in my sprinkler system this weekend , I uncovered a grill accessory that I haven't used in years. It was at that moment that lightning struck

, so I quickly ran downstairs to shut the sprinkler water off, and diverted my attention to working on the truck. It's a rotissorie rack for the spit on the grill, I cooked salmon in it once 4 years ago but it turned into a real mess, so the thing found its home in this storage box out on the deck that also houses the sprinkler backflow valve.

Had some long bolts from something else laying around, that threaded nicely into some existing tapped holes in the engine. Used some nuts as "jack nuts" to secure the bolts, then some other nuts & washers to secure the rack. Had an old oven thermeter I was using to monitor my wood stove.. well that stove will be off until November so it too got donated to the more urgent cause.

Yesterday's run was the debut of the new cooker, and I must say it performed quite well. Held 6 burritos very nicely, and the thermometer showed around 175 degrees F all day. The highest I saw it was 200, checking right away after driving over an hour to meet up at the meeting place.. and the lowest it got all day was about 130, after the engine was shut off for an hour while we were all digging snow.

Next plan is to figure out how to catch & contain grease, so I can start doing more elaborate meat dishes.. I think a roast or tenderloin would do quite well in there, and would provide a nice finishing touch to this year's night run. But for now, I'm content with burritos, as they sure hit the spot! 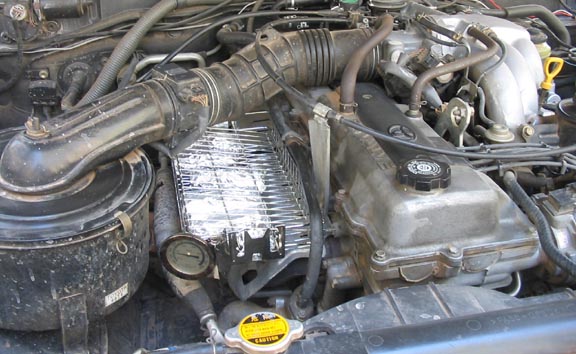 Looking good
Too bad I got the SC in the way

That just cracks me up..

There used to be this great book out there on engine cooking (there was a much better name than this) - filled with recipes and how-tos, etc. I think it's out of print though. Anybody remember??

I like your setup. Another meaning to your straight-6 -

I have that book . I'll look for it this weekend. All kinds of recipes and driving time for cooking.

Tim, you have waaaaayyyyy too much time on your hands!

I think the cookbook was titled "Manifold Destiny"

Now that U have the broiler done how about cooking up those capes we talked about.....

patpend2000 said:
I think the cookbook was titled "Manifold Destiny"
Click to expand...

That's the one! Good call

I had to print that pic out to show the wife (she generally won't get anywhere near me when I am on Mud).

wow, that guy had to be drinkin!

that's it, Manifold Destiny, I should pick up a copy. And I'm going to resist the urge to post a pic of the oven light, while I've still got half an ounce of credibility here.. Romer the LX version will have an in-cab thermometer. And Dan, you know it's much more fun to work on these dweeb mods, then to actually do something substantial... don't worry there are some gears turning upstairs for you too sir.

Romer said:
Tim, you have waaaaayyyyy too much time on your hands!
Click to expand...

humm. it dosent seem that way. if you dont mind me saying, hes not the one with almost 2,500 posts. so again WHO has to much time on their hands? id rather be under the hood with something creative then looking at a computer screen.

Nicely done with a touch of Red Green.

Location
Shufflin' Through the Texas Sand

nakman said:
But for now, I'm content with burritos, as they sure hit the spot!
Click to expand...

SWEEET!!!!! Finally a thread with some substance.....a nice change of pace from birfields, CEL codes and fluids. Good work nakman, George Foreman ain't got nothing on you!

Just when I think that you guys can't get any stupider....


You go and totally redeem yourself!!
What a great idea, I love it!

My favorite manifold meal is Wings of Fire from Gordan's Food Service. Wrap 'em in tin foil and strap 'em to the manifold heat sheild.

Transmission won’t shift on its own