Got a newsletter from H&W Machine a couple of weeks ago talking about their new solid state phase converters. I've got a couple of rotary converters but was intrigued by how simple/small (size of your fist) they are and ordered a couple of their PCO2VS for $86 ea. Put one on an old Bridgeport mill and I couldn't tell any difference in startup or running vs the big/expensive rotary converter.

They're for low startup load applications and come in different HP/rpm configurations. The actual unit is from PhazPak (poor website) but I found them on the last link cheaper than H&W (H&W includes box and a little hardware though). Gonna try one on a South Bend Heavy 10 next. Looks like the simple/cheapest versions go up to 10hp (depending on rpms). They've also got some harder starting load versions for a little more and I believe you have to add capacitors.

Don't have any hours on it but if it holds up, might be a great low-cost alternative to pricier phase converters, VFDs, etc.

Yeah, they're fixed frequency. Rebuilding the bridgeport right now so no update on function. They're small! 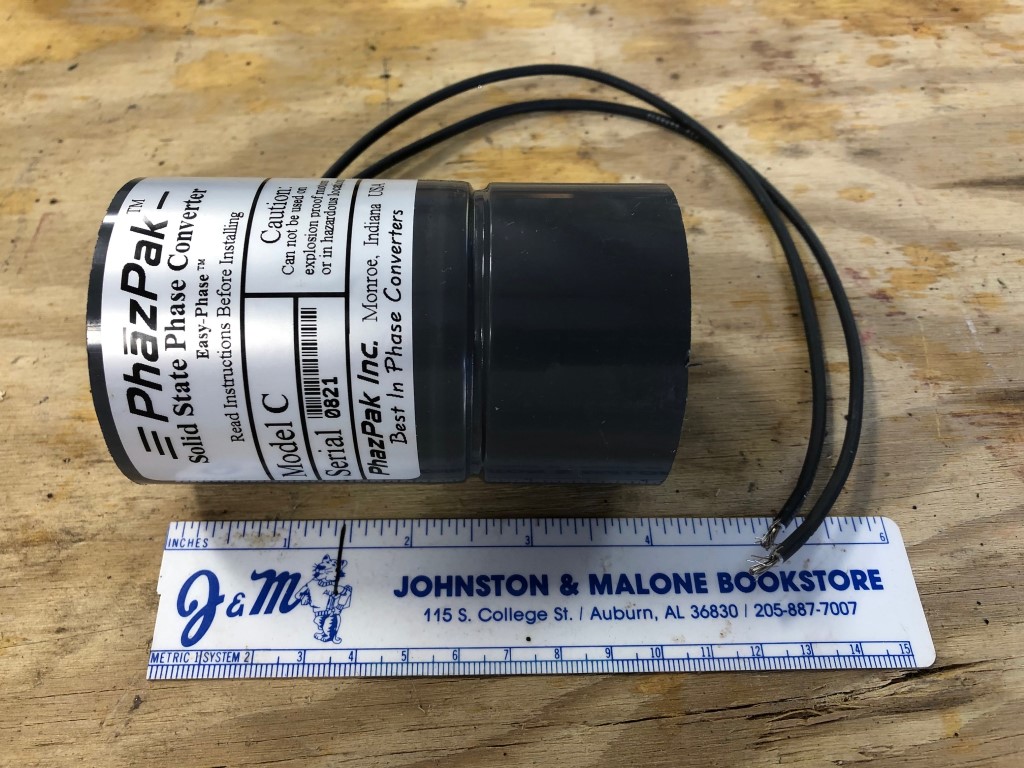 Static phase converters will derate your HP by 2/3rds. Also causes a 3 ph motor to run hot due to running on single phase.
You can get away with it so long as you don't exceed loads like depth of cut (DOC), however you'll be replacing the motor or static phase converter sooner or later.
Your 3 ph machines prefer a well balanced sine wave from a Rotary phase converter (RPC) or Variable Frequency Drive (VFD).
One advantage of a RPC is it can run multiple machines.
The advantage of a VFD is you can incorporate special features like motor braking, vector control, ramp up/down, speed control (RPM) and much more.
The down side of VFD is each 3 phase machine requires one. The other down side is it takes more effort to take full advantage of a VFD.

I built a RPC for $800 back in 2001 and it still runs nine machines and is ultra quiet. I have seen commercially sold RPC that are loud and run poorly.
I have balanced the three legs within 3% and can run all machines at once so long as each machine is started one at a time. I have also incorporated two Hitachi VFD's to further enhance control on a plate roller and on a 1640 lathe.

The lathe now utilizes low voltage (24vdc) for all control switching and has two options for motor braking.
It also has speed control using a Potentiometer (POT) with a digital tach. Micro carriage stop using Hall sensor and a back up mini micro switch to prevent a crash. This carriage stop comes in handy when boring a blind hole or threading a blind hole.
Other features from the low voltage control system is the use of LED's for better lighting eliminating the hot halogen task light most modern lathes come with.
The VFD also allow for a joy stick jog feature that I use for power tapping at 6 Hz.

A short video on motor braking
An example of carriage stop. Notice the Digital Read Out (DRO) resolution and repeatability.
This video shows the joy stick jog for power tapping or set-up.
Joy stick jog fwd/rev. - https://www.youtube.com/watch?v=APkeCkg3Ph4
This is an example of speed control using the POT.
VFD speed control and Joy stick FWD/REV. - https://www.youtube.com/watch?v=ItJGqYlMSME

I share this because most folks utilize a VFD to power a 3 ph machine and never tap into the other features a VFD can provide.
I like the Hitachi VFD's because they are dependable and they utilize a lap top computer to conduct a "motor tune".
The two VFD's I use are 3 ph in since I'm running a RPC but you can still have all these features when utilizing a VFD to power a 3ph machine.
Other VFD features I use on the lathe are coolant pump continuous or spindle turning only, Carriage stop override for reverse threading and LED strip lighting and LED task light.

This is the heart of the system.
The blue component above the VFD is an AC choke used to clean up the dirty incoming AC power.
To the right of that is the breakers, the external power switch. This switch has to be off to allow the cabinet door to be opened (safety).
Below the power switch is a low voltage power supply (Rhino). to the left of the power supply is the fuse holder. Behind all this you can see a brake resistor. This protects the VFD by shunting excess power allowing the motor to brake. The cabinet was modified with a computer cooling fan to keep the components happy. Everything except the AC choke and VFD were sourced on Ebay. Automation Direct is a great source for VFD's 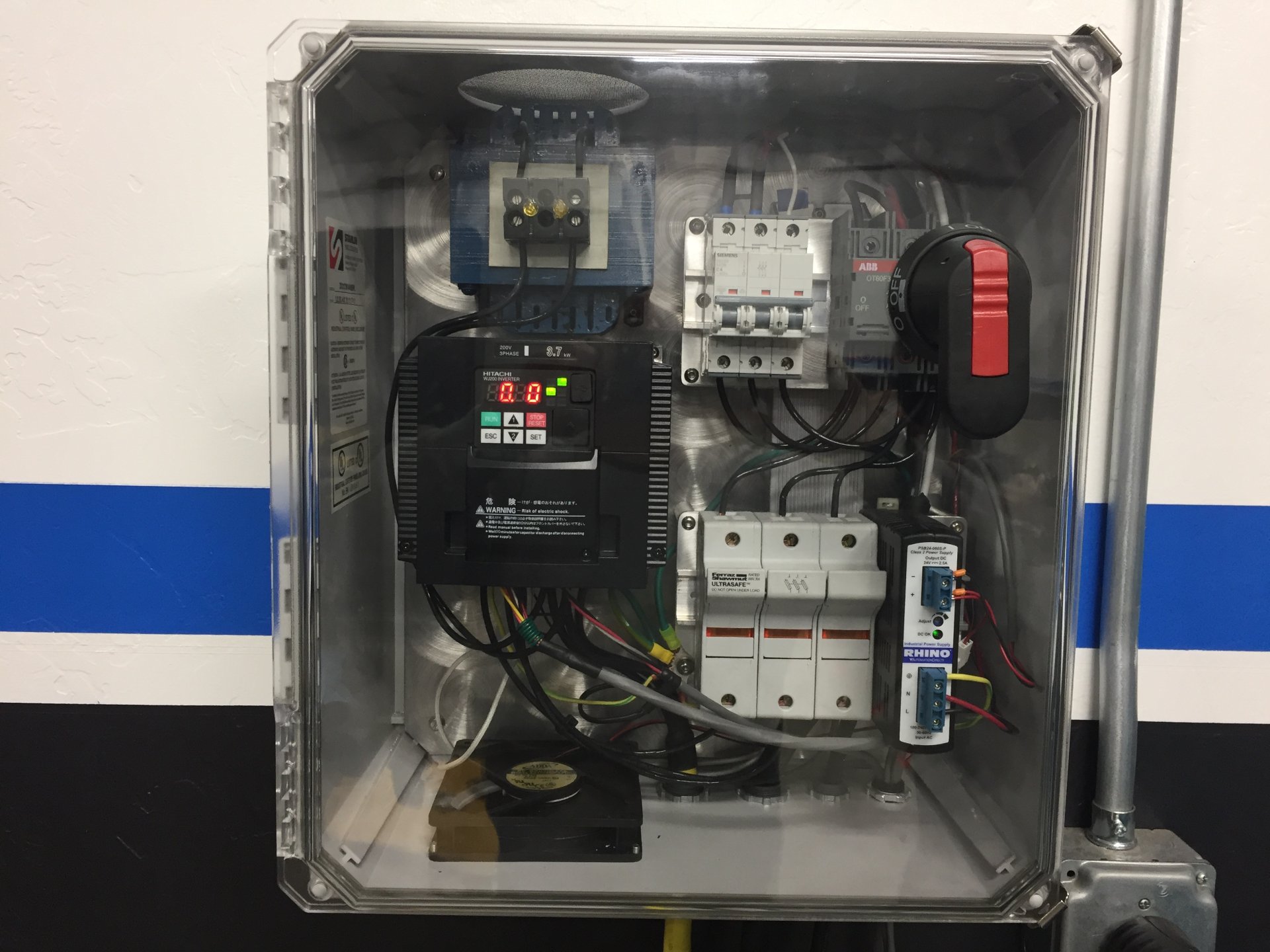 The LED strip light also sourced on Ebay works well with the low voltage DC control system. The task light was also modified with an LED. 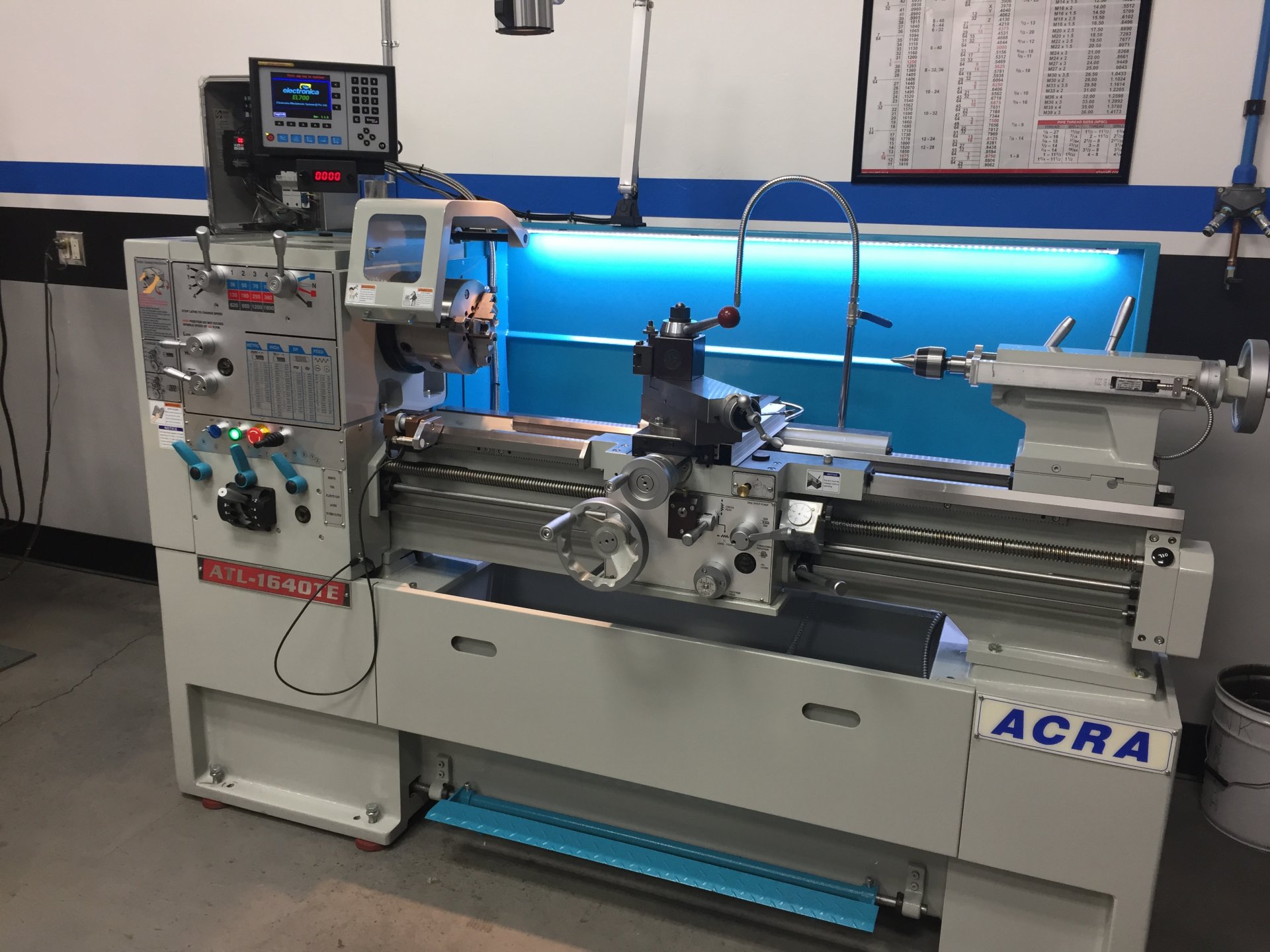 Lastly an hour meter was also used for scheduled maintenance on headstock, gearbox and carriage oil.
RPC and VFD are the way to fly.
I hope this helps someone considering a static phase converter vs RPC vs VFD. 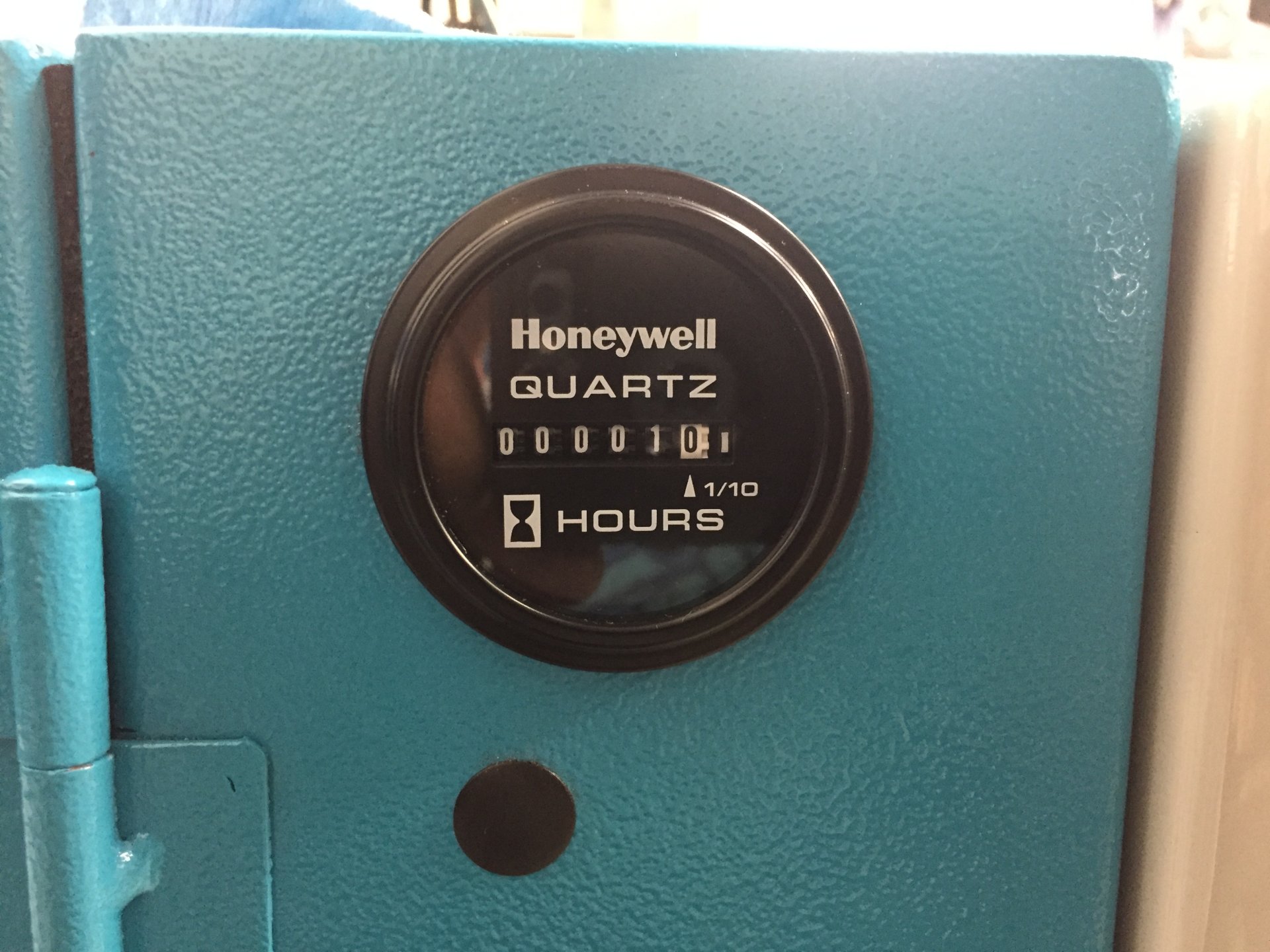 Don't know what it is but it doesn't seem to be the old static type phase converter that I remember. Or if it is they've managed to cram a lot of capacitance into a small pkg for a small price. I'm sure there's a down side but not sure what it is. H&W is a pretty reputable shop and does a lot of machine rebuilds so I wouldn't think they'd be promoting it if there was a major issue like 2/3 reduction in HP/excess heat. But maybe so. I'll give it a more serious try once I get the BP head rebuilt. Easy enough to go back to the rotary.

As far as VFDs. They sound great and I'm sure they are but I barely have the attention span to try something different more complicated than the two-wire PhazPak. I got this more out of curiosity than anything else. I've got a 20hp American Rotary that the BP and some other stuff have been running on for years. Also just got a 50hp AR AI unit a couple months ago (yet to install) so cost isn't the issue.

sorry on the “2/3” (fat fingers) it should have read 1/3rd. These are to the best of my
Knowledge a type of “start” capacitor that powers the third leg on a 3ph motor. Once the motor starts, that same third legs drops off leaving the 3ph motor running on single phase (2 legs). This is why they loose 1/3 of the rated hp and run hot when the machine is put to the rated task. Keep us posted when you have the machine running and taking aggressive cuts. Also keep an eye on your motor temps.
Peace
You must log in or register to reply here.