Possibly the last chance this year for some hardcore snow wheeling. We are going up the Applegate side of Dutchman's Peak. Meeting at the Ruch Market at 10am on Sunday. The goal is to reach a cabin that is 18 miles up Beaver Creek Rd. Expecting snow of at least 24"+ dress accordingly.

Im in Even with my

We're planning on camping this weekend. We were going to go tomorrow morning, but with the heavy rains expected tomorrow we've changed plans to leaving Sunday. If that changes again we'll hit up the snow

Heck it might even clean out some of that mud

I'll either tow you out or laugh and point while you shovel. Either way you won't get left behind.

Sounds fun, I should be there

Any other takers? Wife has to work so just me.. . Got room if anyone wants to join.

Im out. I have to work today. Have fun guys.

I'm not 100% myself, if anyone else is planning on going give me a call to make sure. I replaced all my clutch hydraulics yesterday and I don't have all my pedal yet. I think I may be fine but we'll see.
Jesse 840-3871

Should be good snow, just looked out the window and the snow level got down pretty low.. 2500'? I'm out. Sounds fun tho'..

Did anyone make it out?

Still would love to do a spring snow run

I couldn't stand it so I took the kids up the road where TOY350, retro, Ebag and I went before (up the road from my house) and didn't find any real snow until 3 to 4k in elevation and the drifts were 18" plus but packed into ice really quick, flotation tires were the ideal, I had tall and skinnys on and did OK. The kids went snow boarding... Sorry, we forgot the camera!

Went up the mountain across the street to nab our 100th cache. Just a trace of snow nothing to brag about in the sense of wheeling. 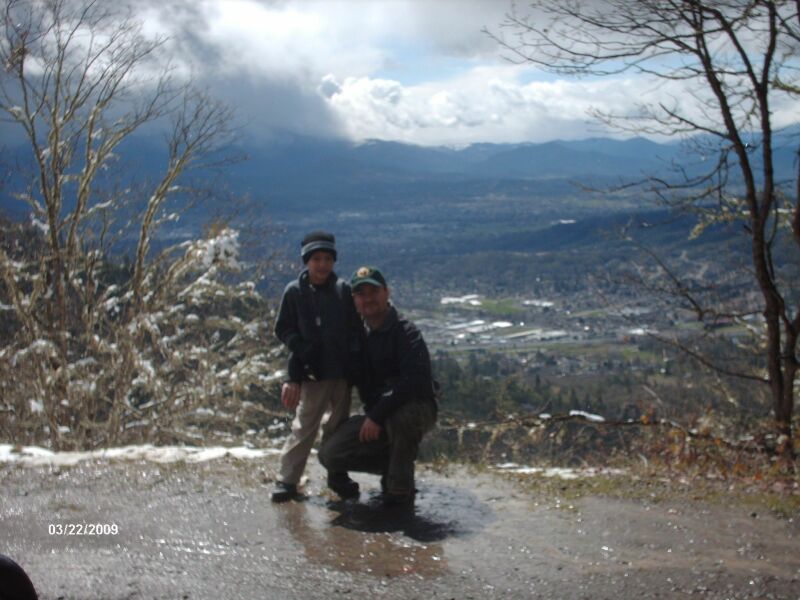 We found snow, we made it to the cabin, but holy hell it was a bad day!! The only other rig to show up was my buddy with a Sami on 35's. He had one passenger with him and I had my 6 year old and a friend riding with me.

I fought a bad clutch from the very beginning, if I parked and left it in granny 1st I couldn't get it out of gear to start the truck with out someone pushing me to take tension off the syncro's, every shift there-after involved some sort of grind or rev matching to get it in gear.

We got up to some pretty serious elevation quickly and took a short break to air down. I was having overheating problems and when we finally got to the highest point my throwout bearing starts screaming out of nowhere. The snow was 24" to 36" in depth and really had very little traction to it. At that point I was ready to call it a day but after some badgering from my friend we push on and go down a ugly steep road toward the cabin. We literally winched down hill in the middle of the road in order to keep making forward progress through the snow. After a while he got way ahead of me so I decided to bomb down the road and catch up, 2nd gear, low range, foot to the floor. Of course my overheating problem were exasperated by the quick decent and as I was coming out of a nasty little creek crossing I got stuck. I popped the hood to let it cool and low and behold I have spit my alternator belt on the decent. Upon searching my truck for my spare I realize I had left it in my garage at home. I swapped my power steering belt to my alternator and with a little tug from the Sami to get unstuck, we pushed on to the cabin.

My buddy had already stoked up a fire and we hung out for an hour and had a beer. It really is a neat old hunting cabin open to all out in the middle of nowhere. People have signed a guest book which dates the cabin back to 1956, there's some food, bunk beds, outhouse, spring fed faucet, and a creek nearby. The chimney was crudely cut into the ceiling and there was daylight coming through the walls and roof everywhere. As we're sitting there warming up it starts snowing hard, really hard!

After a 10 point turn and some ramming from the samurai (which dented my tailgate) we headed back up the hill. I got stuck repeatedly and with no power steering it was nearly impossible to point the truck in the right direction. We got to one particularly deep corner and I buried it, we pulled out the winch cable and the truck wouldn't move even with 10,000 lbs willing it forward. We were about to run a double line when I noticed I blew the bead on my front tire and it was crumpled from the pressure of the snow on the sides, my spare was a 38" worn out Bogger but it was better than nothing. I went to dig out my lug wrench and low and behold didn't have one. I used a crescent wrench and a 3lb sledge to take off all 8 lug nuts while my buddies manned the shovels and cleared out the tires to free the Pig. At this point I was ready to leave it half buried in the snow and cut my losses.

With the spare tire in place and a quick winching we found my alternator belt 50 yards up the trail. Even though it was melted and twisted I put it back on. A little more progress was made before I slid off the trail and was overheating. I pop the hood and my power steering belt had come off and took my alternator belt with it which also meant my water pump wasn't doing anything. I hiked back down the trail and found them a few hundred yards back. This time I didn't bother with the power steering belt but instead just put the one back on the alternator and the all important water pump. I winched out and made it to the next corner where I fully buried it and had to pull the friggin' cable out again. It is very disconcerting to see a 40" tire buried in snow. It was 4:30 and we were within a half a mile of getting back to the saddle which meant it was downhill after that.

I took the lead and told my buddy I wasn't stopping until I got to the top. Once again 2nd gear pedal to the metal, I gave it all it had. With no power steering and a front locker I was all over the place, in the ditch, up and down the side of the hill the road was cut into, near miss with several tree's... every time one tire would start spinning the truck would veer in the opposite direction and I was nearly powerless to stop it. We barreled through the area we had to previously winch down and with the temp gauge nearing 240 degrees we crested the hill to the saddle area.

With a brief cool down we were able to make it back to civilization almost without incident. I drove home 20 miles with three tires at 4psi, one front tire at 25psi and 3" shorter than the other, no power steering, and very little ability to control the shifting.

Needless to say I hung out in the hot tub with my friend for the next 2 hours and after a couple beers I was able to laugh about the whole experience. Hopefully in a day or two I'll get pics from my buddy with the Sami.

PS the Sami didn't have one thing go wrong except for a spark plug wire coming off and he probably only pulled the cable out twice! Man that pisses me off!

Man, what a nightmare story.

If you get pics you gotta write that up for TT!

glad you are OK, did the 6 year old even know what was going on? nothing like an adventure to make fun memories for the little guys.

Wow, that is quite the day of adventures. Pics! Pics!
You must log in or register to reply here.

Snow Wheeling and camping this weekend