So I was cutting out a bit of the inside rocker panel area today in hopes of finalizing the attachment of my 3/4 tub to my 74 Cowl an chassis, when a fire erupted on top of the fuse block. I tried to smother it with a shirt but had to hit with the dry extinguisher. Never a dull moment in 40 land.

Long story short there was apparently some strategically placed mouse tinder up in there that was easily ignited by the sparks, who knew. I've been cutting and welding on this thing for a while so this isn't the firs time that the sparks have been flying in the area but whatever.

It was obviously shorted out bad because after the fire was out the idle solenoid was clicking but ignition was not on, crap. I went to unhook the battery and the red wire leading to the positive terminal on the battery was charred and burned up to oblivion. Double crap. Battery now out.

So I've already checked out that SOR has an "aftermarket" wiring harness for $250, and CCOT has a Painless listed but says it's no longer available and Iron Pig seems to have one too.

So has anyone used the SOR one, or iron pig ones?

The next question is should I allow this to change direction of the build?

I was just trying to fix the stuff that was broken like the missing tub! and get her back on the road because my skills in electrical and deep mechanical are not super heavy duty. But now because the wiring is totally fried I'm thinking well, hell, why not tear her down all the way and build it back right in stead of the patch job rebuild I was working on. Thoughts? How much of a pain is installing a whole new wiring harness? I've never done that before.

This is her current state with new tub bolted down.

It's a long story but the tub was missing the rocker section and door jamb, but my chassis and cowl had that so I was working on welding the two together there when the fire broke out...

I've bolted on a new Trollhole carb and it ran but wouldn't idle right. I've swapped the coil, put on new wires changed the fluids, changed the filters, have new shocks, new gas tank from CCOT, saginaw box and pump from the PO, have a new hardtop, with ambulance doors, have DOM tubing for roll bars, extra set of wheels and a nice set of OEM fenders to undo the bob. I felt like I was getting close, but this set back really sucks.

Ain't this fun... I'm off to have a bummer beer and watch some football.

Sorry, I have no harness experience to share, but I'm sure those who do, will chime in shortly.

Sorry you didn't get to actually drive it first, but I'm thinking it may be for the best - this way, you replace the harness now, before you get more money into it and it burns down anyway... and, judging from your 'basket case' thread your son is just the right age to really start learning how do things on your 40... and small hands are a definite plus when trying to snake wires thru tight places...

Be sure you have fusible links where they belong, once you get your harness worked out.

I would stay away from Painless unless your building a buggy. Not sure about Iron Pig's but talk to him and see what he thinks. I met the crew this year at GSMTR and think they will take care of you. Just tell them your goal and even if they don't have what you need they will likely point you in the right direction. They may even have a good used one. Which BTW is what I personally would be looking for.

all aftermarket wiring harnesses require the ability read wiring diagrams and proficiency with a multimeter - they all miss some aspects of the Toyota wiring scheme, particularly if you want to keep the OEM switches, so you will have to recreate some circuits

Hi
Another option is to rebuild your burnt loom.
I have just finished doing my forty series loom . ( one weeks solid labour )
Before I started I brought :
1. Toyota wire harness drawing . 3 of them all around the same year but all a bit different.
2. 3 second hand 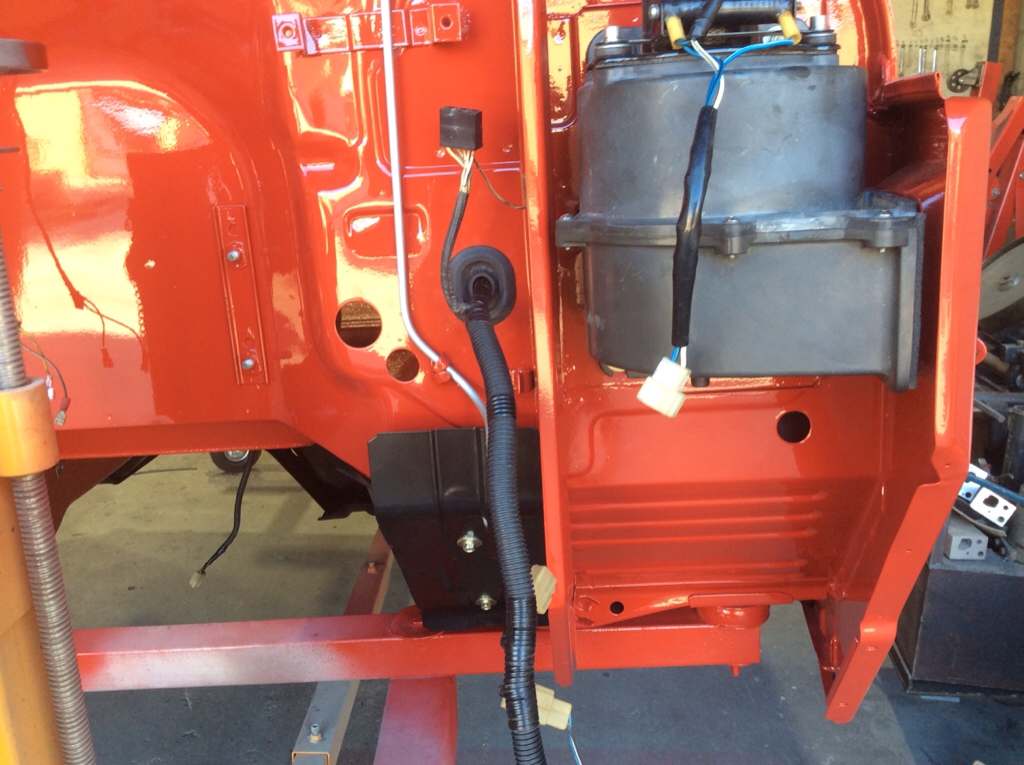 Toyota wire harness from EBay . These are good to rob plugs and cable from.
3. A hand full of new plugs and sockets . Black tape and new black conduit.
4. A large piece of card board so I could map out the loom.
5. A collection of tools to aid with pin removal and wire crimping.
6. Also needed is a solder iron, shrink wrap and muilty meter.
And last of all lots of patience .
A photo of the loom coming out of the fire wall.
Cheers

If it's only a circuit or two, I'd repair it... Or see if you can find a decent used one from a 74 or somewhat newer 40. Don't wrap it with electrical tape because it will become a big sticky mess over time. Years ago I modified my harness and wrapped it with 'Magic Wrap'. It has stood up for 18 years now... It hasn't broken down or unwrapped. It looks like black tape, but it only bonds to itself.

I thought I'd found a better 3M product... 'Splicing Tape', but I've found it cracks and breaks when it gets warm... I'm not sure if I wrapped it too tight, but overall, I've been happier with the 'as seen on tv' 'Magic wrap'.
All that said, when I had an opportunity to get a new 'Quick Wire' harness from another 40 owner for a steal, I jumped on it. All the universal harnesses require some work arounds because they're wired differently that Toyota wired things.

Cool, thanks for the replies. After I posted that I went through and read up on some of the harness threads and I'm in the "fix the one I have" mode of thinking now.

My dad came down and looked at it with me, he is much more electrically savvy than I am, and he seems to think it's fixable. Buying a couple harnesses from Ebay or here on Mud is a good idea, which I will attempt.

When we looked at it closer the fuse block may be ok, the connectors into it are pretty fried.

I sell all the wire, connector housings, terminals and non adhesive harness tape to repair your harness. You can also download the schematics for your truck there.

Thanks Coolerman, I've checked out your site, good stuff, I will be need of much of the above. Those diagrams will be much help too. It doesn't look like you have the fuse block? If mine is in fact fried, which it may not be, should I go with a newer style fuse block or go OEM? And where is a good place to get that?

Despite everyone telling me to keep mine, I went with a ez-wiring harness. About $150 off ebay. Paid the extra for the nice fuse box with the flasher relays in the block not dangling separately. Every wire is labeled, several extra circuits. Trying to use a 1962 harness made no sense, the wires are actually corroded inside the plastic, plastic cracking, and the wires from back then did not handle heat like modern wire casing does, plus I live in a corrosive environment. So I will take the time to figure how retrofit it, and use a little of the original as possible. I figure a lot less electrical gremlins this way, more work but more stable in the long run. If your is in good condition other then the fire, might be worth saving, but if the fire is just part of the problem and it has been hacked up over and over in the past 40 years might not be worth saving.

Painless are very expensive, and no better then EZ or others. Painless is great for a jeep, it is made for a jeep and almost plug and play, but the people selling them for an fj40 are just selling universal ones with enough circuits, none of them are made for an fj40. To my knowledge no one is making a real fj40 harness at this time.

Honestly I haven't done much in the wiring realm, but when I look at all of the "harnesses" they look like a bunch of wire and universal connectors with a fuse block on one end, ie nothing magical. So I feel like I could buy some wires, get the diagram, get some connectors and re-wire the thing.

I haven't torn into it yet, so it's hard to say how bad it is inside, but judging by the quick look , there is a melted spiral in the harness wrap winding around the outside. So it was pretty hot in there. I'm still struggling with why the lead to the battery would have fried. The fuses should have protected that wire under the hood?

That one wire got hot enough to almost melt through the factory harness wrap all the way to the battery terminal.

And the PO and the PPO had done some hacking on it.
You must log in or register to reply here.

What are these electrical items 1976 FJ40