Well my simple evening project turned into an 8 hour ordeal and I still can't figure out the problem. Only hope is the collective mud brain trust..


I am adding fog lights and a small light bar to my LX450. The lights have been installed for some time and I was finally getting around to writing them up. TO make it all plug and play I ordered the SLEE upgrade harness and two aux harnesses. My goal here is for the fog lights to only work when the headlights are on and for the light bar to be controlled by the high beams so I can flick the bar on and off. Sounded like a greta plan..........

Last night I installed the light bar with @NLXTACY 's instruction from way back in 2008. So far so good. Both high and low beams worked as they should. Ton light I installed the aux harness per the slee instructions. How its supposed to work is the you connect plug A from aux harness to either plug H or G depending on whether you want low beams or high beams to control your lights 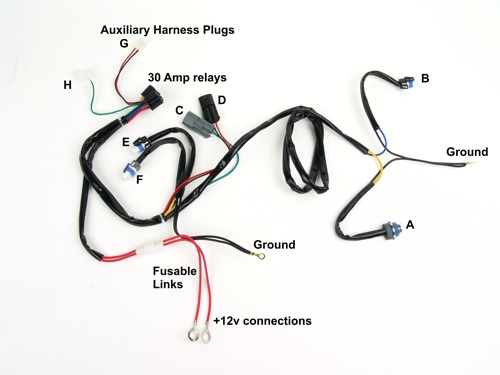 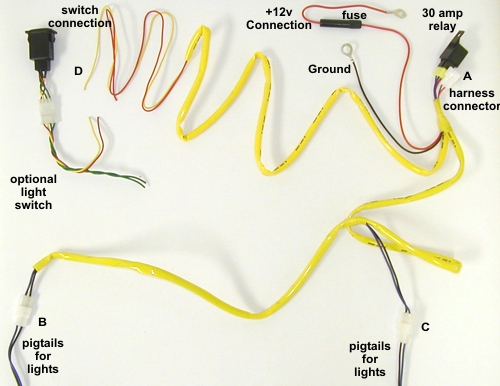 So for hours I could not get the damm fog light to turn on . I triple checked every connection. Used a meter to see where i had current. and used several different relays. No power at the light pigtails regardless what i did. Aux harness is grounded to the exact same spot as the headlight harness. I checked the switches, both fine

Now this is the real crazy part.... Now the harness is turning on my high beams somehow! The aux harnesss shouldn't have anything to do with the high beams if plugged in correctly (i checked 100 times and tried both ways) Before it turned on the high beams it was causing voltage fluctuations on my instrument lights. Now the dimmer doesn't work

Anyway i'm completely stuck and frustrated. I have conquered many electrical projects before, solar, dual batteries, ect... so i'm not a complete noob. WHAT THE HELL IS GOING ON HERE?

It sounds like you could have a short some where causing the high beams to come on. How do you have the three new lights connected to the aux harness? Is the B connector to the fog lights and C to the light bar? Or are B&C connected to each fog and then to the light bar? Just trying to figure out what you are working with. Do you have a separate switches for the new lights or are you using the stock switch for controls?

I pulled the aux harness for the light bar to simplify things while I’m trying to figure out the issue. B and c are connected to my baja fog lights. Both these plugs show no voltage when the lights are switched on

You may have overloaded the OE relays? One black and one brown, in theory an auxilary harness should not add additional load to the already ageing OEM system. Check the OE relay terminals and sockets in the fuse box.

Is there power at the aux harness plugs G & H off of the upgrade harness?
S

I remember having a similar problem in 2006. Does the Slee switch have an small lit LED bulb? If so, you may need to switch to an incandescent switch.

"I'll jump in here with the details of the problem Steve had in his ground switch, which I had the exact same problem with in my 4R using a toyota switch to run my Rally 2000's.

Mr. T. and most aftermarket use lighted switches that switch positive voltage, not negative or ground. That becomes a problem because the in-switch lights are usually LED's which can't be hooked up in reverse. A typical lighted switch works as follows

The problem with a switch to ground=on a relay is because there are 2 grounds (no 12v+ lead). Normally folks will try to just change the ground (pin 3) to 12v+. As Steve found out, that doesn't work on LED switches because LED won't fire in reverse = there is a postive and negative on LED bulbs. You can reverse the LED leads and resolder to make pin 3 12v+ and pin 2 Ground. Or, as I suggested to Steve, the easiest method is to just use a incandescent bulb lighted switch, because unless there is a resistor on it, it is non polarized. Specifically, the incandescent switch can be either a ground or a positive relay trigger.

version here. Or you could just use the Summary: Make sure the lighted switch is *not* an LED type

DanMedeiros said:
I pulled the aux harness for the light bar to simplify things while I’m trying to figure out the issue. B and c are connected to my baja fog lights. Both these plugs show no voltage when the lights are switched on
Click to expand...

voodu3 said:
Is there power at the aux harness plugs G & H off of the upgrade harness?
Click to expand...

Yeah that’s the crazy thing. Those plugs are putting out exactly 12v

@stlcruiser super weird. So I have two switches, one came with the truck and one is new that I bought from slee.

Only the new switch will trigger the high beams. Both switches had continuity when I tested them

Slee said it was using an older switch with the new harness and that I needed to use their new switch with new wiring. Hopefully that works. Now I need to figure out why my dash lights do not work. Switch was surging voltage and brightening the instrument gauge. Fuse isn't blown. Is it the dimmer?
You must log in or register to reply here.

brake upgrade to my 91 worth it?

brake upgrade to my 91 worth it?