I bought the Slee Rear Bumper last summer and have been real happy with it. Slee came out with an option for a Rear Bumper Hitch receiver system:

The adapter is if you want a bike rack but has no strength. I am thinking about towing a camper to Moab this year, so I bought the receiver system. Although it's not officially rated for load, I should have no problem towing a camper over the mountain passes.

The hardest and longest part of the job is cutting the hole in the crossmember. Since I have a fairly new bumper, it already had a cutout for this receiver.

Next, you have to cut a hole in the backside of the crossmember. You want it wide enough you can get the nut plates in and hold while you thread the bolts. You also need to make sure the hole is tall enough. I cut the hole and then there was a 1/4" lip preventing the receiver from fitting properly. The crossmember and you are at an angle, so its easy to mis-judge (at least that's the way I see it!)

Once you get the reciver in, install the two side brackets. They mount to were the spare tire plate was. Then tie the brackets to the reciever and tighten everything down.

Using the holes on the front plate, drill the holes using a 1/2" bit. I don't have a drill doctor and it took me two bits. If the drill stops chewing, time for a new or sharper bit.

Then hold the nut plates while threading the bolts. This was easiest from the bottom so you could see both sides. 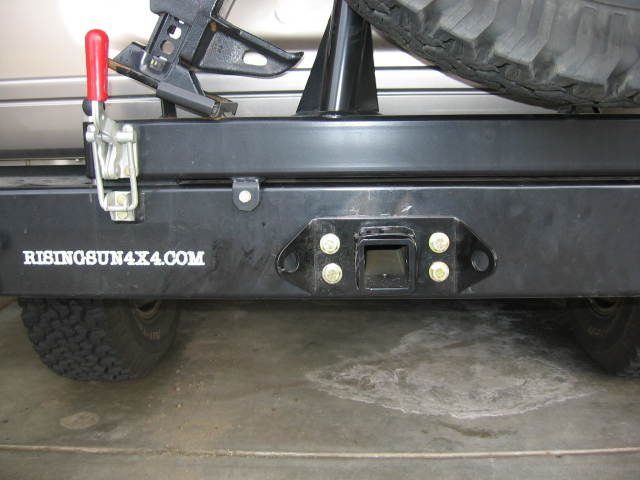 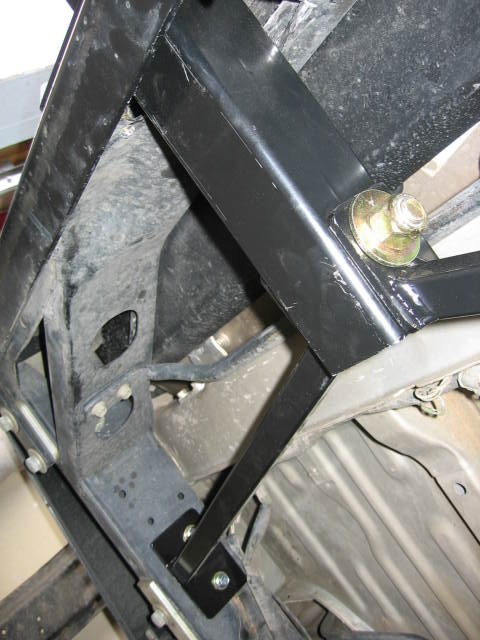 cabron said:
Looks like it is braced enough to not have a problem, especially with just a camper
Click to expand...

Christo's production version is likely plenty stout for a class 2 application,maybe a 3. It was designed to be easily shippable for a reasonable ammout of money yet provide a solid receiver-type mount. My original version has a solid crossmember that spans the frame at the forward end of the receiver tube and the tube is longer. I have towed my 3,700 lb boat just fine with mine.

Do remember that this is NOT RATED FOR TOWING and the end user does so at his own risk. However, if you study the mounts and the tube you can see that what is there is every bit as good as a "real hitch", it is just not represented as such and there is no liability implied as to the suitability of this device for towing....Yadda, yadda, yadda... 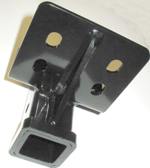 Nice work Romer! I saw the link and do you guys think this one could be used for recovery or too dangerous?
SC'd, Water intercool'd, HQ'd, Slee'd, Norcal80'd
my wip

Nice work Romer! I saw the link and do you guys think this one could be used for recovery or too dangerous?
Click to expand...

I get a bad feeling seing hitches sold and used for towing that aren't engineered and rated for towing.

My writeups:
HOW TO: DIY Remote Start/Alarm/Keyless Entry
John Deere HIR bulb mod
HOW TO: Fix your leaky windshield

Rich - The hitch pictured above is clearly stated not for towing. If you look on Slees site, it says, "It allows for the use of 2" accessories like bike and ski racks. This receiver is not rated for towing" Christo wouldn't even sell it to someone who wanted to use it for towing.

cruiserdan said:
Do remember that this is NOT RATED FOR TOWING and the end user does so at his own risk. However, if you study the mounts and the tube you can see that what is there is every bit as good as a "real hitch", it is just not represented as such and there is no liability implied as to the suitability of this device for towing....Yadda, yadda, yadda...


yep, then the liability of using a non-rated hitch for towing is on the user.... wonder where the liability of a home built lies - probably also on the builder.
1989 FJ62 * OME Lift * 33x12.50 BFG AT's * Interco Birddog wheels * 4.88 gears * Period correct Smittybuilt bumpers

On the user, but think of the other people on the road. Before you go high fiving down the road with a heavy camper, most often than not your tow kills the other guy in the on coming lane. This means that they sue the pants off you when it was your decision to use a non tow rated reciever. In addition, let me know the roads you drive so I can stay off the other way while your on them. Lost a great friend to a trailer that came off the hitch from a bad install.
97 LX450 Stock and looking to grow as cheap as possible!

I didn't know the bumpers came w/o reciever. Hunh.

bucky said:
In addition, let me know the roads you drive so I can stay off the other way while your on them. Lost a great friend to a trailer that came off the hitch from a bad install.
Click to expand...


Well thanks Bucky on your vote of confidance on my installation skills. Sorry about your friend, but I am not stupid enough to tow something to heavey for this set-up. Stay out of Colorado and Utah and you should be safe.

Romer, how are you going to determine what is too heavy for that hitch?

From what has been pictured I haved compared it to commerical frame mount hitches that accept 2 inch drawbars. To my eye it does not look as strong as the ones that I have used. That is my honest opinion.

Having towed a 7500 lb trailered boat over 50K miles, you can take my experience for what ever you want.

Were I to market a trailer hitch, I would invest in the engineering to be able to confidently rate it appropriately, and would stand behind my product for its intended use. If I couldn't do that and make a profit, then I would leave the market to others.

Just sharing my opinon, well received or not.

Rich,
No problem with your opinion. I admidt Buckey rubbed me the wrong way. I do not intend on towing anything like what you have done relative to 7500 pounds. I do not intend on towing anything with a GVW of greater than 2500 pounds, and more like 2000 pounds. i.e. a small pop-up camper. 4 1/2" bolts through the crossmember and two beams out to the frame attached with 3/4" bolts is more than stout enough for my application.

I thinks this is much stronger than the hitch that is welded to the tube bumper on my 40.

I am an aerospace (or use to to be) engineer who dealt with structural integrity as part of the job. I admidt that I am a EE and not an ME, but working spacecraft for 20 years, your skill base broadens. Am I basing this on an educated guess, yes.

BTW- The cost to actually take these through the official ratings test has to be expensive and running a business you need to understand return on investment.

Christo properly cautions people on his web page and in person. I am sure Christo would be grateful to anyone who could help rate this. Slee off road is not set up for that.

"testing" and "rating" aside that "bike rack" bolt on hitch from slee looks mighty strong to me. over in other parts of the world people are bolting hitches to that rear crossmember using the holes toyota put there just for that purpose. I immagined toyota "tested" that crossmember for at leaste a few thousand pounds. I can only reasonably supose that Slee's big ol bumper even reinforces the crossmember. This newer towing attachment/go-through-the-crossmember thing looks even beefier. The only thing to question are the welds and they look darn redundant. Having grown up a farm kid in a huge agricultural setting in Fresno California I can assure you there are lots of home made hitches out there on the road-few that look anything as sturdy as these slee jobs-Not that this makes it right to design your own-just fact-use the chain. and what about all those zillions of home made trailers on the road-do you trust the welds on the neck of the trailer that hooks to the ball? I'm for safety too it just doesn't seem like these slee hitches are the least common denominator.

If someone has used one of these slee hitches and has a resultant horror story I will eat my post-otherwise they look good to me
IFS Stone Thrower
http://www.pirate4x4.com/forum/showthread.php?t=912264&highlight=starfighter

Don't sweat the small stuff IYKWIM.
"If it wasn't a Landcruiser and hadn't been built the way it was you do realize you would be DEAD." VA State Police Officer

i just like the way you pimp the club romer
It's a 1F, they are too stupid to die. - jim c

Romer said:
I do not intend on towing anything with a GVW of greater than 2500 pounds, and more like 2000 pounds. i.e. a small pop-up camper.
Click to expand...