I intended to do Rowher Trail for the first time yesterday. I've heard it's a moderately difficult trail, but much easier with lockers/SFA. Bit of a late start, got to the trailhead in late afternoon. Put the Cruiser in 4LO, ABS wouldn't disengage, and the Center Diff Lock wouldn't go on. Tried the FR and RR lockers and.....nada. Since it was only me and a buddy in the Cruiser with no second vehicle, and it was getting late, very windy, and cold, and adding the fact that I am completely unfamiliar with the area and were dead reckoning off of 2 so-so maps (though we had a backup GPS), we decided to do the much easier Sierra Pelona Trail. Saw a really pristine FJ40 near the trailhead, parked. This thing was gorgeous, yellow with white top, AT/KO's, just perfect. It appeared the owner was out mountain biking.

Since the Rowher Trail crosses the Sierra Pelona Trail at many points, we tried to hook back up with Rowher to do some more difficult stuff. With no lockers, stock height, etc., I was spinning wheels and dragging ass. Fearing getting stuck, and having to hike in high winds and freezing my ass off, not to mention pissing off the missus at home, I turned back, thoroughly spanked and feeling down, and returned to the easy bypass. Got to the top of the mountain a short while later, and had lunch at the site of the Sierra Pelona Fire Lookout. Gorgeous views, winds about 70-80mph with even higher gusts, bringing the temps down to somewhere between a witch's tit and a dead eskimo's nutsack.

Finished with lunch, went to turn the engine back on and......nada. s***. Since the Cruiser was facing the wind, we could open the doors without having them ripped off. However, opening the hood was going to be a trickier proposition. I had my buddy Steve sit on the hood while I opened it. He stood on the ARB bumper and applied all his weight while I released the latch. The wind was so strong it actually carried him on the hood. Checking the battery, the problem was immediately apparent: the negative cable had come off the terminal. I replaced the cable but Steve couldn't get the hood back down, even hanging off it, so I jumped up there and we both brought it down. It took literally 450 lbs. or more to close the hood.

Jumped back in the cab, chilled to the bone, and the Cruiser started right up. The cable would come loose a few more times on the trail, as the cable clamp bolt had stripped, making it impossible to tighten. No problem, I just kept jumping out and replacing it. Center Diff Lock came on and the ABS disengaged as well. I didn't try the FR and RR Lockers, though I assumed they'd probably work, and that the problem is the lockers need that additional 12V to engage, and can't run off of the engine power alone.

Sierra Pelona Trail is an absolutely beautiful trail, with great views along the entire route, and little spurs to take if you want more challenging wheeling obstacles. It's rated at a 2/10 for difficulty, and that's pretty accurate, but at the end of the trail, the descent to the paved road is very narrow with long vertical dropoffs on one side, which due to recent weather have become prone to landslides and erosion. You may have to do a little impromptu rock-crawling on a thin road, looking out the window at a thousand foot drop, making for a couple of butt clenching moments.

This is not my picture. 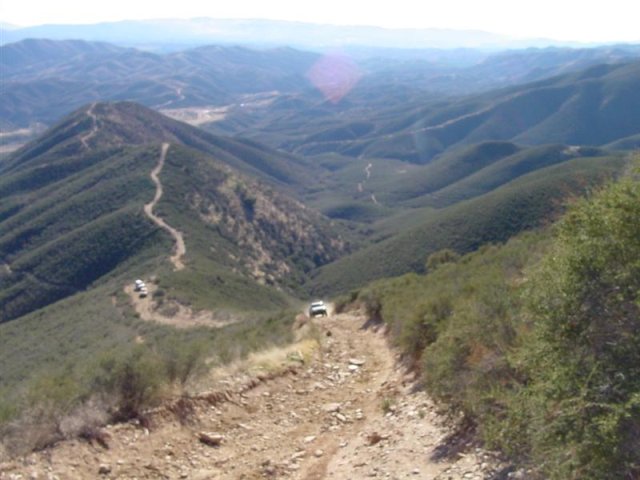 Shahram, was in the Angeles Forest yesterday and did a quick run near the Dam. If I knew you were going to be around the neighborhood we couldve gotten together. At least for a short time - had my kids with me.

That wouldve been awesome and couldve posted one more white 80 doing a trail this weekend - see Wheelin 80 PICS again thread.

Drop me a PM next time. Just live less than 30 minutes away from the area.

txkndu said:
Shahram, was in the Angeles Forest yesterday and did a quick run near the Dam. If I knew you were going to be around the neighborhood we couldve gotten together. At least for a short time - had my kids with me.

That wouldve been awesome and couldve posted one more white 80 doing a trail this weekend - see Wheelin 80 PICS again thread.

Drop me a PM next time. Just live less than 30 minutes away from the area.

Edit - Shah that was probably the same 40 in my picture. That is so f-ing funny. What time did you arrive at the trailhead?
Click to expand...


Wow, that's funny. I was admiring that same truck not two hours later. In fact, do you remember a guy waving to you as he sped past in some small town (I think it was either around Elizabeth Lake or Leona Valley)? I noticed a white 80 with AT/KO's, parked on the south side of N2, facing traffic, and waved as I passed, and the guy waved back. Was that you?

In any case, yeah, thanks, I'd love to PM you and let you know when I'm gonna be in the area. Always glad to meet new folks and go wheelin'.
People are always calling me "a******". I must look like some guy they know named a******.

Dang, I wish you guys had posted on here. I live 20 miles from the reservoir, it's a fun trail. Sounds like it was a bit windy up there!

If you guys ever want to do something local again, let me know.

Have you done the BC109 trail up at Lockwood valley? Did that for the first time on Jan 1, it was a blast. I want to get a group together soon and go out for a day run there. We got turned around by the rain, it got really slippery and there were radio warnings of flash floods, so we left. but there's still much more of that canyon that needs to see my cruiser!!

I'd also like to do the Silverwood trail again, that's a fun one, great day trip.
"I love the smell of diesel in the morning"

Shahram,
I've done Rowher/Sierra Pelona several times- it's close and I can test stuff out if I make a change to the truck. I also like the views and driving up there.
The only challenge is that one climb off the backside-- but no sweat for the 80.

Sounds like you had a crazy time with the winds!

where the heck is all this?

I will most certainly post up and throw out some PMs the next time I go, if you guys are interested. To answer your question, e9999, the Rowher Trail and Sierra Pelona Trail are just south of Bouquet Lake, or approximately 20 miles north of Newhall. Look up words like Bouquet Canyon, Texas Canyon, Sierra Pelona, or Rowher Trail to get an idea. Lots of write-ups exist about the trail, and some good pics as well.
People are always calling me "a******". I must look like some guy they know named a******.

hey guys wheres that at down south(from the fresno area) i have family in cagal canyon and santa fe springs and am there all the time?Is it near either?

Good Point of Interest to see if its near you is Magic Mountain six flags.
I dont use this way since I live closer to the North part (Bouquet Canyon Rd).


I recommend getting a map if you want to do a good part of the day exploration.

1. Take 5N
2. Exit Magic Mountain and turn right.
3. Turn left on Bouquet Canyon Rd
4. Long drive up and becomes twisty as you get closer to the area
5. Stop by the Ranger Station on the Left (pick up map)
6. As you see the Dam (Reservoir) look on the right for very small brown OHV signs.
7. First sign would be the difficult Rohwer Flat trail entrance and further along the road would be the easier start into the trail. (Both ways will criss cross each other).

fire lookout to rent in Sierras