Should I have a Hub Lock button?

My 1996 HZJ73 has no hub lock switch for the electronic hub locks, just an H4 switch.

Should this switch somehow control the hub locks also or do I need to order a new switch with both buttons?
I currently cannot switch into 4wd, the 4WD dash button just blinks.

Do you have Auto Hubs on the Truck ?
L

BarnFab said:
Do you have Auto Hubs on the Truck ?
Click to expand...

maybe someone removed the hub lock sw before, anyway the "system" will connect the 4wd, if you put the lever directly to L4, if it keeps flashing the system is bad in the electric hubs, and maybe for that reason they changed the buttons . The above applies to any 70 series that has an electric hub, Strictly speaking, the order is first hub sw-->transfer sw = 4wd, but if without doing anything in the sw, you put L4 directly, the system must connect everything "electrically"

Update:
I replaced the H4 switch with the H4/Hub Lock switch from my other HZJ73 and that fixed the 4WD system.
Installing this same H4 only button on the other HZJ73 (that has manual locking hubs) made it so I cannot switch into 4WD (neither Hub Lock or 4WD dash lights come on), so I'm thinking it's the switch.

Do I need to rewire it so the vehicle always thinks the hubs are locked? Or should this H4 only switch also make the vehicle lock the hubs?
Attached are pictures of what the H4 and H4/Hub Lock switches look like. 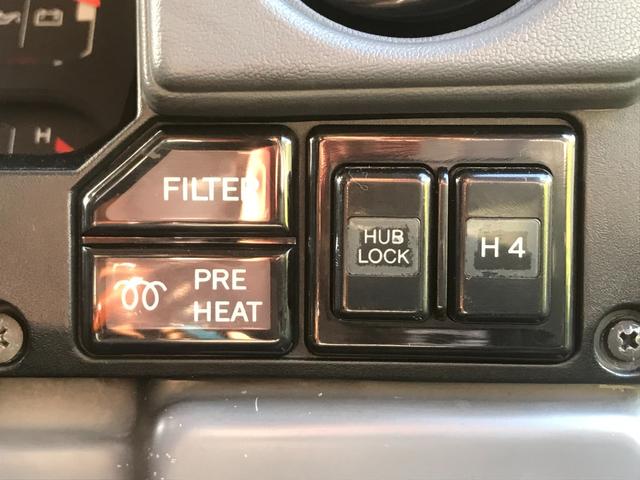 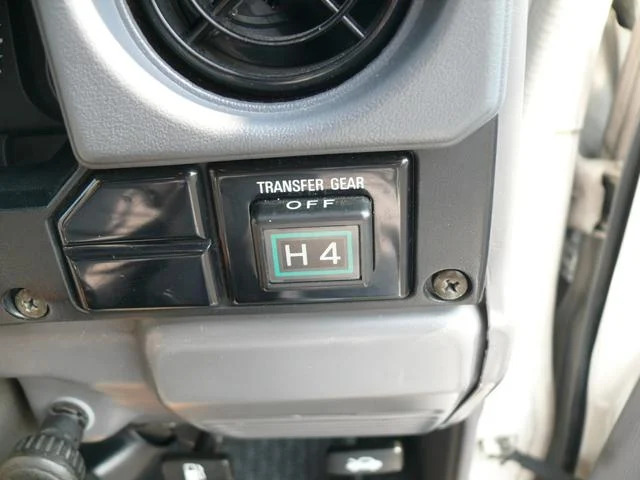 Yes, I think the switch was bad.
Actually there is no point in switching to 4WD without having the hub locked before. So the single H4 switch does it all together, in correct sequence and observing dependency.
For one exception: You need to be in 4WD quick and can't afford that procedure to fail. So it's a good idea to have parts of the procedure done before.
That's what the seperate switches combo does. You switch the hubs separately and get their proper engagement confirmed well before going into 4WD.
When needed, only the H4 switch to the tranny needs to work now, any time later.
You also have a better reporting: With separate switches / indicator lights, if so, you know where the issue is: Hubs or tranny.
The H4 button, though, still needs the logic to first 'read' that the hubs are locked.

If your H4 button causes a vehicle with separate switches not to go into 4WD, although the hubs are confirmed to be locked by that separate switch, this hubs-locked read contact in the H4 switch is faulty. Knowing that, you maybe can take a closer look and fix it.

A defective switch is, all in all, a rare case, I guess. In most cases the hubs or the tranny really don't engage due to electric failure on the hubs motors, or faulty vaccum operation on the tranny.
Thank you for sharing. This may help others.
L

Felde said:
The H4 button, though, still needs the logic to first 'read' that the hubs are locked.
Click to expand...

Thanks for your help!

To clarify, the H4 only button is not working when placed in 2 different HZJ73’s, but the H4/hub lock button works in either one.
One has electronic locking hubs and the other has manual locking hubs.

For the one with manual locking hubs, is there any additional step needed so the logic can read that the hubs are locked?

Next step is I’m planning to try to take apart the H4 button and look for any loose or dirty contacts, advice before I try that would be greatly appreciated if anyone knows what to looks for.

My comment was regarding the all electric setup only. I have no knowledge on mixed setups. Not even if those where available from factory.
I don't think, manual hubs have any contacts indicating their condition. Never saw this.
On manual hubs, all the logical computing is on the driver. If one engages 4WD with hubs open, it just grinds...
You must log in or register to reply here.

Help me identify what I have here.

Back in the Saddle, only this time in a KZJ78 (Coming from a long line of 80s) What should the top of my list should look like?